Links to other pages of photographs, results, races, etc at the foot of the page.   Names, etc in blue are links to full page of information on the topic. 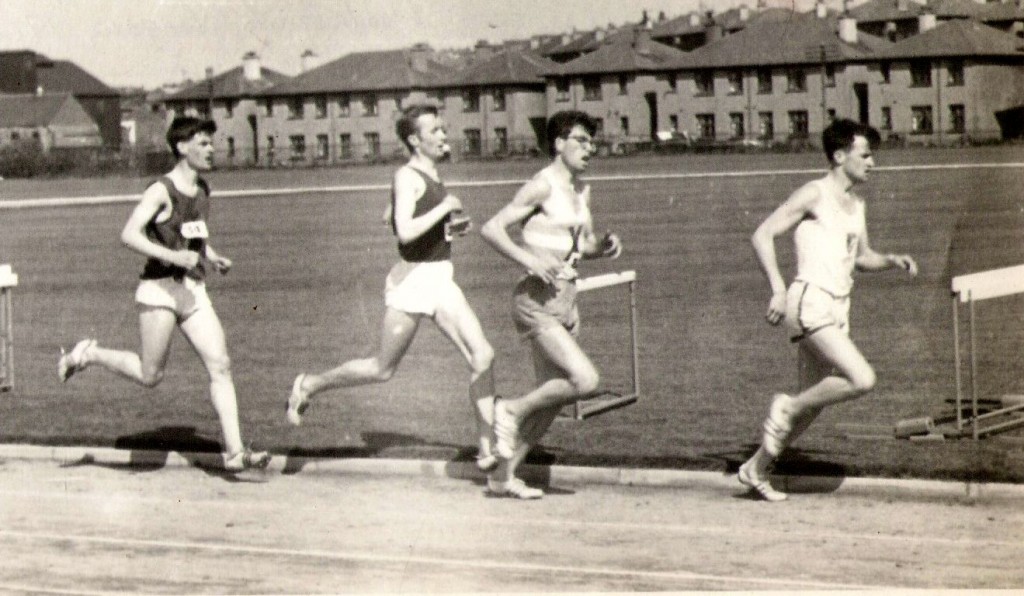 The contribution to Scottish athletics over the years by the top clubs has been rightly noted and applauded.   However it should be noted that the Universities have also made a contribution to athletics that is slightly different but no less important.   There are links to various pages at the foot pf this page.

–   Runners such as GM Carstairs before the 1939 war ran only for their university, even in more recent times Donald Gorrie, a Scottish champion and record holder, ran only for Oxford and Achilles.

–   Then there are the ‘foreigners’ who come to study and compete for their University and raise the standard of the sport – I need only mention John Myatt, Ian Hamer and John Sherban in this context and the point is made.

–   And then there are the runners who go to University as young, steady runners, and become not only good quality athletes but valuable organisers and committee men for their clubs.    University athletics hastens their development.

The intention on this page is to note some of the contributions made by the universities and by individual students – including some fond memories by former alumni of the various establishments. 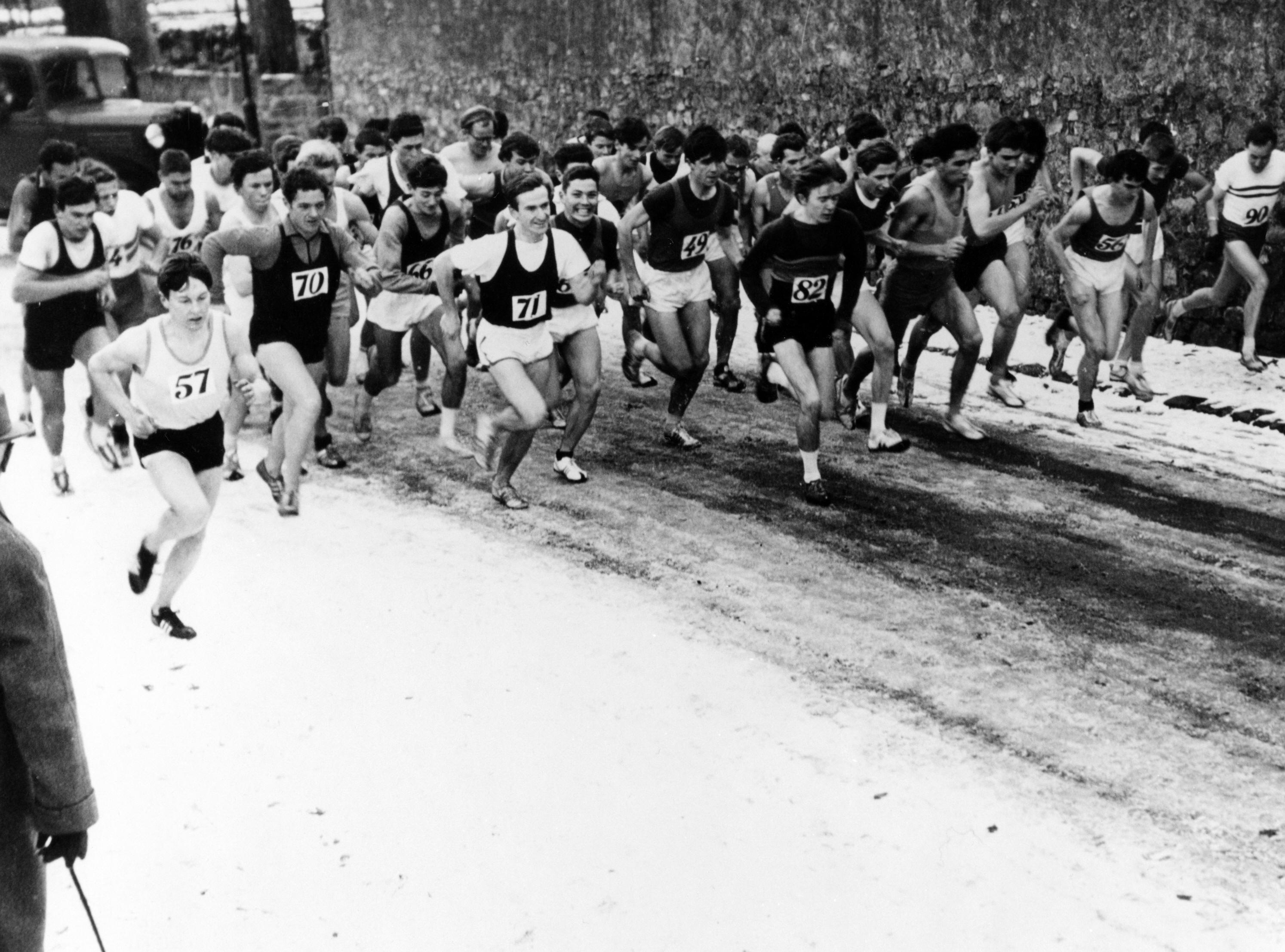 University race in Aberdeen, 1960s: picture from John McCall (70) with many notable athletes.

82 Walter Eadie, behind on his left is Roger Sandilands, in front of him to his left Bill Ewing,

Their cross-country contribution to the sport has been  really significant and all four men in the picture at the top have been profiled on this website already – to see the individual profiles, click on the name above.   Fergus actually won the National Cross-Country Championship and he and Donald are Olympians. The actual Universities cross-country championships results are available at this link where there are Olympians, Commonwealth and European Games athletes as well as sub-4 milers and sub 2:15 marathon men.   The women’s winners are no less illustrious with their own Olympic, Commonwealth and European championship athletes.   There are some results missing – any help to complete the lists would be well received.   Several Universities athletes have represented Scotland in World Cross-Country Championships with Fergus Murray and Calum Laing prominent among them.

The University Hares and Hounds clubs (well, some are ‘Hare and Hounds’, others are Hares and Hounds) often hold open races where the organisation is usually first class and some pioneering ideas are encouraged – eg they were among the first to have men and women running together in road and country  races.   The Glasgow University 5 Mile Road Race, and the Edinburgh University 10 Miles Race are the most popular of these.  The pavilion at Glasgow was a star in its own right – you only have to say the name ‘ Westerlands ‘ to any Scottish University athlete and his eyes light up at the memories before dimming at the thought that it is no more!   Aberdeen University started out on the King’s College Grounds before moving to Balgownie.

Colin Young sent us copies of some programmes including that for the 1968 Great Britain Universities Championships, so we have put extracts therefrom up   here. 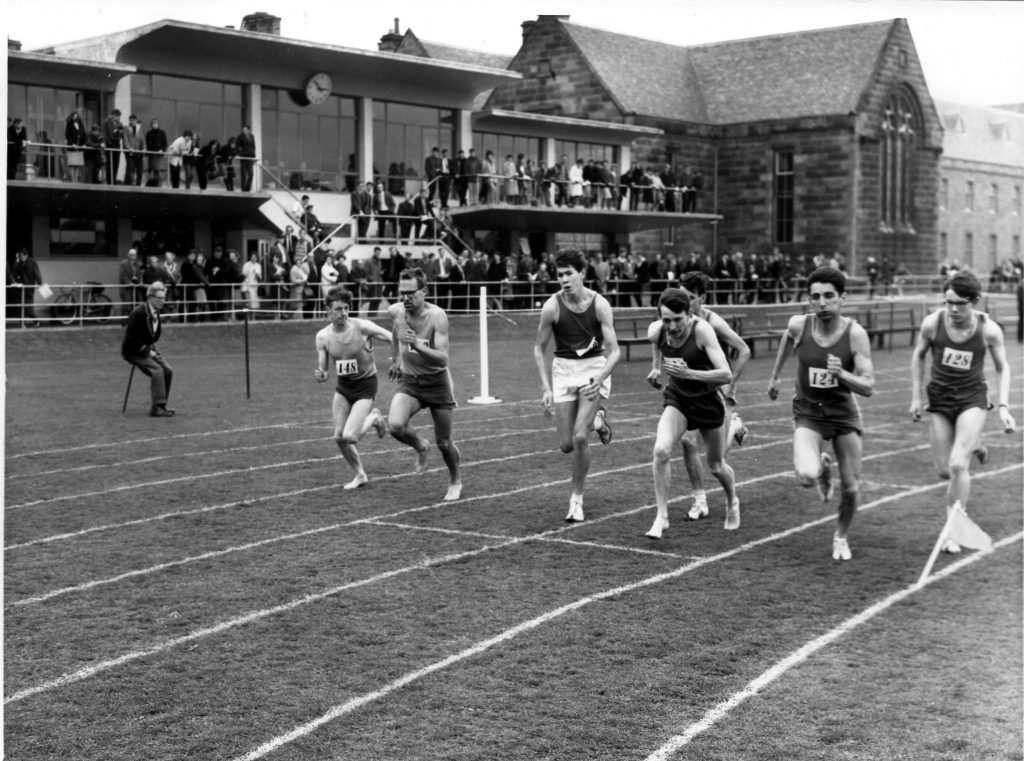 We are gradually putting up some coverage of the track and field athletics scene at the Universities in Scotland.   To make it manageable it is being done in five  year chunks.   It is not meant to be comprehensive with every single time, distance or height chronicled.   Rather it shows the relative strengths of the various institutions to each other and to Scottish athletics generally.   It is a work in progress.

The English Achilles Club, representing Oxford and Cambridge, is well known and continues to thrive now in 2015, but the Scottish equivalent – the Atalanta Club, restricted to the four ancient universities – which was a good going concern for many years, has unfortunately become defunct.   It was good while it lasted with SAAA and AAA champions turning out for it plus Scottish, British and Olympic athletes representing the club.and we need more information – anyone with knowledge of the club and/or its fixtures is asked to pass it on. 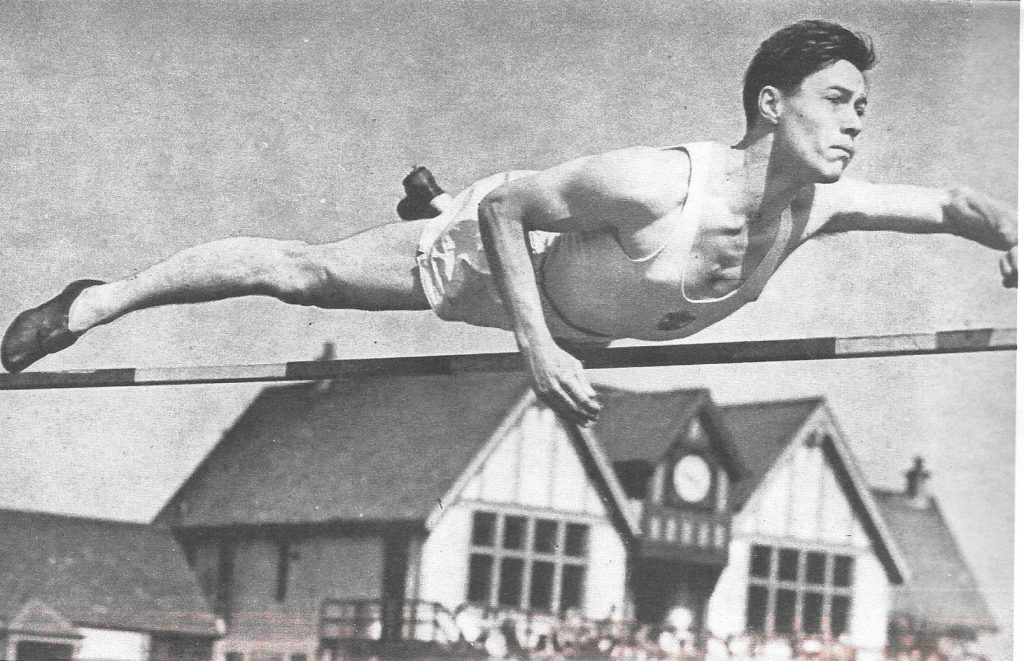 Some teams were just outstanding by any measure and probably the best University team to come out of Scotland was the Edinburgh University squad of the 1970’s , and the Glasgow team of the early 1960s’ wasn’t too bad either we have separate profiles for Allan Faulds , Callum Laing and Douglas Gifford   These teams were made up of regular university runners who raced only for the university while they were studying and others ran for their clubs, only donning the university colours for major races.   Runners in this group would include Bobby Quinn and Alistair Douglas of Glasgow University.

Some of the university runners from the past deserve to be better remembered than they are, some have really remarkable post-university careers too.   In this category I would put such as Ian Lapraik from GUAC, Morris Carstairs from Edinburgh and James Soutter from AUAC.   The list of almost contemporary university athletes of high calibre would include Lawrie Spence – possibly the most versatile of them all with a range from sub 4 for the mile to sub 2:20 for the marathon, Lynne McDougall. Olympic finalist, Frank Clement , also Strathclyde University and also an Olympic 1500m finalist, Hayley Haining, one of our best ever women cross-country runners, Don Macgregor, Olympian and one of our best ever marathon runners with more sub 2:20 clockings to his name than any other, Vikki McPherson, Commonwealth Games finalist, Gareth Bryan-Jones, Commonwealth and Olympic Games, and Alistair Blamire, track, cross-country and road runner of great ability.

Just reciting the names above gives an indication of the quality that there has been through the ages in Scottish University athletics.   There were/are many kenspeckle figures who were officials, administrators, team managers and the like and Willie Diverty of Glasgow University Hares & Hounds was one such.   One of the deservedly best known runners-turned officials is the redoubtable Robin Thomas: a stalwart of the Edinburgh University teams of the 1970’s he became a founder of Hunter’s Borg Trotters and then President of the SAAA.

Of course the university scene with its hard training, team trips and social life leaves many great memories of great success and great celebrations.   The collection of University Memories has started with those of Colin Youngson at Aberdeen, Fergus Murray at Edinburgh and Graeme Orr’s memories of Glasgow University plus some of his recollections of Heriot-Watt.   John McCall has added his recollections of life at Glasgow Universities as well. There is a profile of John as a student and as a doctor in Canada to be seen  here   Then there is that by John Myatt of his time at Strathclyde University.   Bobby Mills was a hurdler and decathlete who competed for Glasgow University in the early 1960’s – his photographs can be seen from the links at the foot of the page, below the photograph. 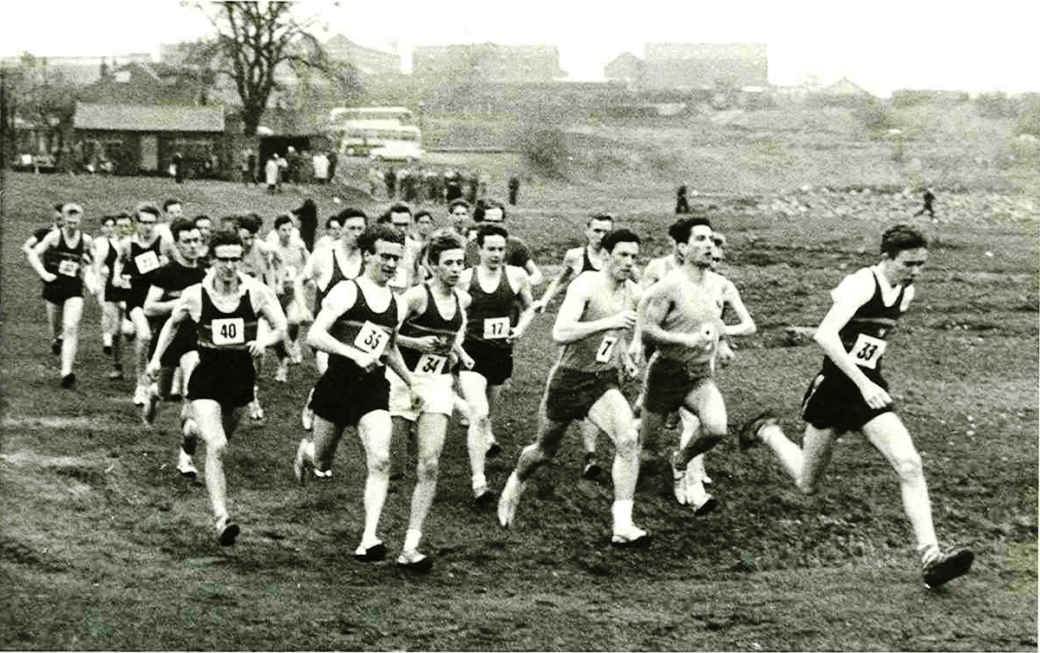 32 Colin MacIver, behind him is Knut Kemhus, 33 Walter Eadie, 34 Roger Sandilands, 35 Alex Johnstone, 40 Kenny Shepherd, behind him is John Docherty.

EU runners: behind and to the side of 17, in a T shirt, Gareth Evans; on his left, dark vest, Roger Young;   behind Gareth’s right shoulder, Chris Elson; the wee head behind Elson’s right shoulder, Alistair Matson.