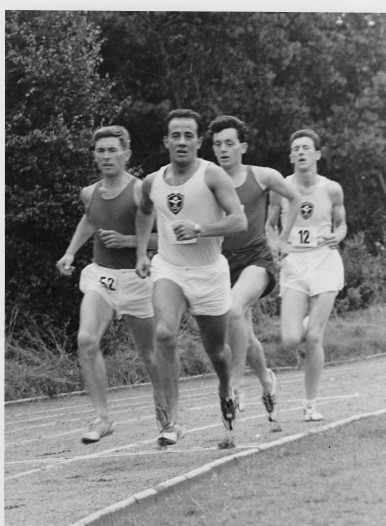 Tom in second place, running in the inter-services in Germany

Tom’s running career was in three inter-linked phases.   First as a good club runner with Beith Harriers, then as a National Servicemen with the Army in Germany, and then back at Beith (he had never left it) as an even better runner after his experiences racing and training with the Army.   Tom’s replies to the questionnaire have given us a lot of information about his career highs and lows so it would be right to look at some of the championship statistics on the Scottish scene, starting in 1959.   Abbreviations:   AHCA is Ayrshire Harrier Clubs Association, here stands for the Ayrshire Championships and SWD stands for the South West District.

That is a small selection of results taken from championships – County, District and National – where they were available.   eg County results were few and far between as far as newspaper reports are concerned.   However we should maybe look a bit more closely  at the two seasons where he gained international selection, 1962/3  and  1963/4.

The Scottish winter season starts  with the short relays, and on 3rd November, 1962, the South Western District Relays were held at Kilmarnock and Beith were second to Ayr Seaforth and Tommy had the fastest time of the day.   A good start for his campaign.   A week later the club was again defeated by Ayr Seaforth, this time in the County Championships and Tom was beaten for fastest time by Jim McLatchie of Ayr, a Scottish track internationalist over one mile,   He was only four seconds down on McLatchie’s 13:12.   McLatchie also beat him in the match between the SCCU Select and Scottish Universities.   That race was won in a tie between McLatchie and Fergus Murray who crossed the line with arms linked, Tommy was fifth with Martin Craven and Callum Laing separating him from the winners.   He was only 24 seconds behind the joint winners.   On 12th January, 1963, he won the Ayrshire title by over 200 yards leading Beith to a team victory.   A week later he won the South West District title from C Aitken of Wellpark by 67 seconds and was clearly in good form for the upcoming national title race.   On 2nd February, Tommy was representing Ayrshire in the Inter-Counties championship at Paisley and finished third behind  Andy Brown and Lachie Stewart and only 11 seconds behind the winner.  He had been racing frequently and was obviously in great form.  Then came the National Championships, held at Hamilton Park Racecourse over the notoriously heavy trail with the big hill incorporated into every lap, Tommy ran well and finished ninth.   The selectors picked the first six runners (Linaker, Wood, Brown, McKay, Craven and Taylor) with the next three (Kerr, Laing and Cochrane) as reserves.   As luck would have it, there were a couple of call offs and Tommy was in the team.   It was held at San Sebastian, Spain, on 17th March.   57th of the 94 runners, he was fourth of the six scoring runners for his country – ahead of Callum Laing (63rd) and Bert McKay (68th)

The following summer, Tommy raced well and at the end of the year had a track best of 14:37.3 for Three Miles..

The 1963/64 season was also a good one, marked with racing often and well.  On 26th October, Beith turned out a strong team in the District relay championships.   The South West was a hard championship to win with such clubs as Paisley Harriers, The two Greenock clubs (Glenpark and Wellpark) plus all the Ayrshire teams.   Tom ran on the fourth ‘glory’ leg, turned in the fastest individual time of the afternoon by 26 seconds and the club ran out comfortable winners by 48 seconds.   Shortly after that, 9th November at Kilmarnock, Tom again ran the fastest stage of the day in the Ayrshire County Relay championships but the team was not so fortunate, being defeated by Ayr Seaforth AC.   Tom’s first representative outing of the winter was on 14th December at the Glasgow University HQ at Garscadden, when he ran for the Scottish Cross Country Union against Scottish Universities.   He finished 8th in a race which featured runners of the calibre of Mel Edwards, Ian McCafferty, Fergus Murray and Donald Macgregor.   Ian Harris had by now joined the parachute regiment and was running well for them but he was home in January and on the 18th he defeated Tom in the District Championships by half a minute with the club second in the team race.   With the National Championships coming closer the Inter-Counties Championship was held at Cleland Estate in Lanarkshire on 1st February.   The race was won by Ian McCafferty and Tommy was seventh, just behind Andy Brown and Kenny Ballantine and two places up on Lachie Stewart.   A week later and it was the County Championships on his home course of Beith and he duly won the race with the club taking the team championship.   After a few weeks rest the National Cross-Country Championships were held at Hamilton Park and selection of the Scottish team for the world championships followed immediately after  the race.   Tommy was sixth in a very good field indeed.   The first ten were:   1.   Fergus Murray;  2.  Jim Alder;  3.  Alastair Wood;   4.  Andy Brown;   5.  AIC Heron;   6.   T Cochrane;   7.  S Taylor;  8.   Calum Laing;  9.  Jim Johnston;   10.   Graham Everett.    Given that the top eight were automatically chosen for the international, Tommy went to the race which was held at Leopardstown, Dublin, on March 21st.   He finished 57th of the 79 starters and seventh Scottish scoring runner with Lachie Stewart eighth. 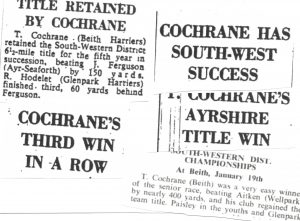 There were other races in which the club was involved but the biggest road race of the winter was the Edinburgh to Glasgow eight-stage relay with only 20 teams selected to contest the race.   Even ‘making the race’ was a target for many clubs in the land, Beith was one of them and they had been in the race in 1958.   The race had four sets of medals awarded – gold, silver and bronze for the first three teams plus an extra set for an award to the team that in the opinion of the judges had put in the ‘most meritorious performance’.   It was often assumed, wrongly that these were for the most improved club.   However in 1958 Beith had started off with Ian Harris finishing ninth on the first stage.   Ian handed over the baton to Tommy who had the very difficult second stage – a long stage of over 6 miles it was the one where all the big stars ran, it was probably the most competitive stage and the one where, because of the quality of the athletes concerned, it was hardest to pull up a place.   Tommy picked up three places to take the club to sixth, then Ken Phillips picked another on the third stage, followed by A Napier who took the club up to fourth place.   Then it happened – the final four places saw the club drop to 6th, then 10th, 11th  and  12th at the finish.   The following year, 1959,  the Beith Harriers team was a good one, Beith Harriers hoped  to win the prize for the most improved team.    They had a real chance to do so and Tom ran on the first stage and finished a very good fifth crossing the change-over line side by side with Springburn’s Eddie Sinclair, to hand over to the star man, Ian Harris.  Ian had unfortunately fallen off his scooter on the outskirts of Edinburgh prior to running the second lap and never recovered properly, finishing 14th.   Jim Sloss had to drive Ian’s scooter to the next changeover point, with the result that he did not get a proper warm-up and he also had an off day.   All the other runners ran to form or slightly above and managed to finish in 15th place.

Beith had many fine runners in the club at that time – Ian Harris would be SAAA marathon champions and cross-country internationalist but joined the Para Regiment and had a superb athletic career subsequently but was not available for club running, Danny McFadzean was another very good runner who finished high up in marathons at Boston and Kosice as well as domestically but joined the Navy and was unavailable for the club teams, Tommy was a consistently good competitor for the club but had two years away on National Service.   The dream at Beith was to have all three able to run together for the club.

Although the short report above from the ‘Glasgow Herald’ (the source for the headlines above) reports that it was Tom’s fifth consecutive, it was his seventh overall and although a worthy victory in its own right, over two excellent opponents. 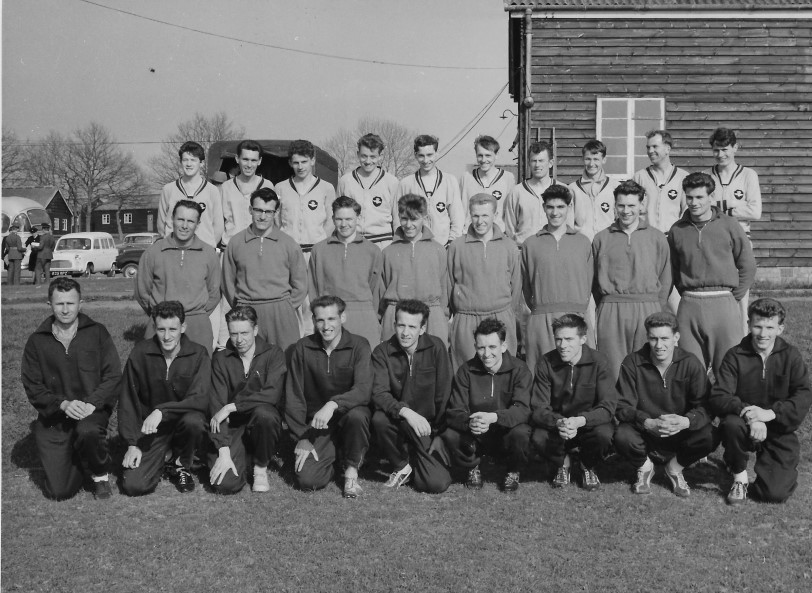 In the post-war period, all boys when they reached the age of 18 had to serve in the Armed Forces for two years National Service.   It took the form of ten weeks basic training before a posting to your regiment for the remainder of your time.   There were regiments known for their sporting prowess – it was good for Britain if their teams performed well and sportsmen usually managed to be able to train and compete regularly.   As a class athlete, Tommy was allocated to a regiment with a good athletics squad.   There were some competitions at home with one of the majors being that between the three arms of the forces – the Combined Services competition featuring the Army, the Navy and the Air Force.   The picture above is of the three teams at one such match.   Tommy, in answering the questionnaire said that one of his best performances was finishing  fourth in the Combined Services Championships at Aldershot.

His spell in Germany covered the home athletics seasons of 1960/61 and 1961/62 where he was competing for the 28th Signals Regiment, BAOR Athletic Association in International Forces Cross-Country and Track.   Like many other sportsmen in the Army at the time, he was also a member of a German Civilian Athletic Club, Bayer Uerdingen,  that I competed for at weekends in Belgium, Holland and Germany. 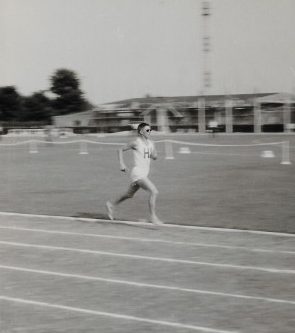