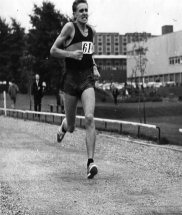 I first saw Mel in action when he won the Scottish Junior Men’s Cross Country Championship in 1964.   This was probably the best cross country race that I ever saw with a really top class field of athletes who would go on to represent and win medals for Scotland and Britain in the not too distant future.   Coming from the West of Scotland and being familiar with Lachie Stewart and Ian McCafferty among others, we were surprised to see this very good looking runner in a yellow vest (we didn’t even know who wore yellow vests!) won a hard, hard race dropping first Lachie and then at the very end moving away from Ian.    My friend Cyril o’Boyle and I both reckoned that he was the best of a wonderful bunch of athletes.   This was proved by some wonderful runs and top class times on the track and the road as well as over the country before, like many another very good runner, he succumbed to the charms and challenges of the hill and fell running scene and became one of the best ever at that.   For instance , in 1963 after the victory described above and the subsequent selection to run for the Senior team at the international cross country championships, he appeared in the Scottish Ranking Lists for 1963 in the 880 yards – 1:56.5;  Mile  – 4:14.9; Two Miles – 9:14.7 and Three Miles – 14:40.   By the victory in the marathon at Harlow in 1967 his appearances in the lists tended to get better the further he went – Mile 4:14.8; Two Miles – 8:56.2; Three Miles 13:51.6, Six Miles 28:27.0 and Marathon 2:18:25.

He had many problems with illness and injury but none of them stopped him being one of the best ever.   It was 40 years before I met him and during that period he had a rich life as an athlete – not many runners have been as adventurous as Mel has been and that is a rare quality in any man.   His own story is at the link below to ‘The First 50 Years’: for an informative, educational and amusing read you must visit it. 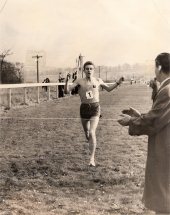 Winning the Scottish Junior Championship in 1963

“Meldrum Barclay Edwards was one-of-a-kind: relentlessly optimistic, enthusiastic, energetic, dedicated, determined, uncomplaining, brave – and encouraging to so many others.

I remember umpteen encounters with this marvellous human being. Like so many others, I was very fortunate to know the inspirational Mel Edwards.

At the end of my first year in Aberdeen Grammar School in June 1961, on Rubislaw grass track I fought a slow but dogged way through the Heats and into the Final of the Junior 880 yards before finishing eighth (and dead last).   From another planet was a tall, thin, dynamic 6th year boy who dominated the opposition to win the prestigious Senior One Mile title.   That heroic figure was Mel Edwards who lived only a few hundred yards from my house, so I often walked up to see him or chat to his parents Joy and Freddy. By the time, as Grammar Mile winner too, I started Aberdeen University, Mel had graduated and gone, leaving behind a fine athletic reputation on the track and over cross country.   Towards the end of my first year, in summer 1967, I remember thinking myself fit enough to join him for a late afternoon five mile training run from King’s College round the Links Golf Course.   While I panted, speechless, and strained to keep up, Mel kept on talking, praising, encouraging – and this was my only session of the day while it was Mel’s fourth!   It was his marathon racing period!

Later that same year, spectating during the prestigious Edinburgh to Glasgow Relay, I was fascinated to see him battling, exhausted, up the hill to the changeover, fifty seconds in the lead, recording the day’s fastest time on elite Stage Two (back in 1966, he had already been fastest on the other top Stage Six). Some foolish official tried to hassle Mel about his club vest being illegal. Mild-tempered Mel lost it, prodded the idiot repeatedly in the chest and the guy retreated wisely.

We all knew he trained like a madman, running endless mileage including 60 x 220 Zatopek-style.   An extremely fine racer but an Olympic champion trainer.   We all believed that he ought to rest a bit more – (partly because of jealousy – there was no way we could contemplate dedicating ourselves to training as hard as he did)   Eventually he got ‘injured’ and had to give up road running.   So what did he do?   Years and years of hill racing!   No one understood how his legs could cope with bashing up mountains and zooming down them while he said he was unable to cope with flat tarmac!

In 1972, when AAAC first attempted the John o’ Groats to Land’s End ten-man road relay, Mel was the Link Man – alone in a car, desperately trying to ensure that five dormobiles (each with two runners and two drivers) could be sure that the route ahead was clear and that they would take over on time for their two-hour stint. By the third day, even indefatigable Mel was utterly knackered and fast asleep in his parked car, out of contact and beyond linking anyone or anything!

When I turned 40, Mel was an important part of the Aberdeen AAC veteran cross country team.   In February 1988 at Dalmuir, after winning the Scottish Veterans M40 title, I glanced back a few moments later to see Mel punching the air with delight as he crossed the line just ahead of Rod MacFarquhar to win the M45 title.   His first cross country one since his Scottish Junior National title in 1964, when he ran right away from future greats Ian McCafferty and Lachie Stewart.   Mind you, he had hardly been idle in the interim.   That day Aberdeen AAC won the team title plus five individual medals.   Rod’s shockingly bad taste joke was that the last team to do that much damage in Clydebank had been the Luftwaffe!

A few years later, the AAC 8-Man Squad won the Scottish Veterans Alloa to Bishopbriggs road relay. On the drive home, we stopped to celebrate in the famous Gleneagles Hotel, since, if we proved victorious, as Captain I had promised to buy everyone a beer. We were all wearing totally inappropriate jeans, sweatshirts and trainers, so even mature, distinguished, confident Mel pushed me in front to negotiate with the posh doorman – who kindly let us into the American Bar, which did not have a dress code.

About then, a week after running disappointingly in an Aberdeen Marathon, I tried the Scolty Hill Race, which features a lot of easy downhill path. I took a few seconds off Mel’s M40 record, and was unsurprised when he could not have been more gracious.

Much later, in 2004, after we had both won age group medals in a particularly gruelling Scottish Vets Cross Country Championships over a horribly hilly course in Cupar, and were slumped, extremely tired, in the gym, we agreed that the ability to keep going when knackered was important! 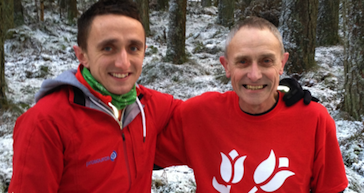 I remember seeing Mel cheering home absolutely everyone well down the field in a Balgownie cross-country race. Speed did not matter; only wholehearted effort. When, for services to Sport and Charity, he became Meldrum Barclay Edwards, Member of the Order of the British Empire (or MBE squared, as he called it) no one could have deserved the honour more. Everyone admired and liked him.

Mel Edwards will be remembered by a vast number of people when other runners are long forgotten.   His dedication has given so much to the sport – by organising races, coaching, dispensing training advice to joggers and fellow international athletes, inspiring youngsters and writing articles.   Yet his personality has the lasting impact.   Fitness, determination and a constantly positive attitude saw him cope with a serious illness for thirteen tough years. Hospital visitors left believing they must be ill because Mel certainly didn’t seem to be!  When I visited him, we laughed our way through my collection of Alf Tupper – The Tough of the Track – photocopies.

All the time, Mel was incredibly enthusiastic, supportive and motivating.  I could add so many more memories. His tales of dawn jogging at Rubislaw, saying hello to the fox that trained there at the same time; the seventy minutes run aged 70; so many charitable ventures. Is it any wonder that Oldmeldrum (should be) named after him; or that his son Myles has inherited the same generous spirit?

One final anecdote. An unusually sunny summer day in Aberdeen. Where did this happen, exactly? Could have been King’s College Playing Fields, Balgownie, Duthie Park or the sands between Donmouth and Balmedie? Anyway, I was jogging in one direction when I saw a familiar figure, dressed only in shorts, running fast, lightly, effortlessly towards me. It was Mel. Would we stop and chat? Not at all – he was ‘in the zone’. I remember his words exactly: “Aye, aye! Fine day! Bare chesty!” and away he went, revelling in runners’ heaven.”

The best exposition of Mel’s excellent career over the first 50 years of his involvement is contained in his own reflections of his career and they can be found from the link below.   I have simply scanned it in exactly as Mel wrote it.   Mel died in November 2019 and a tribute from the Aberdeen Pres & Journal is   at this link .