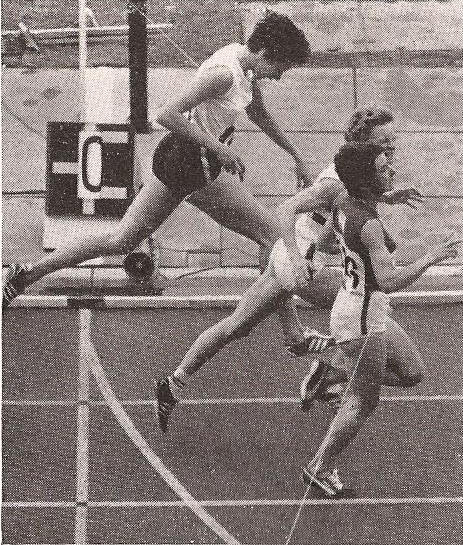 Jackie (or Joyce) Salvona, (Law & District, Livingston and District AC, 14.03.58 ) was an all-round endurance runner with a best for the marathon of 2:58.44 which ranked her sixth in Scotland in 1991.  She had been eighteenth in 1986 with 3:08:51.   A valuable club member, she also raced over the country with several good runs in the National Championships. Joyce Salvona ran for Scotland in four World Mountain Running Trophy Championships. In 1995  and 1995, she won W35 silver medals in the Scottish Masters XC Championships; Livingston and District AC won team gold in 1995 and silver in 1996.

Michelle Sandison (11/4/1980, Stirling University, Shetland and Springburn Harriers). In the Scottish Athletics Championships, she won: three silver medals and two bronze in the 10,000m: and bronze in the 5000m. As a Senior, Michelle ran one road and one cross-country International. On the road, she competed in a 2004 Ekiden Relay, in Brussels, where Scotland lost to Ireland but beat Belgium and France. On the country: 2018 (Home Countries at Nottingham, Scotland lost to England but beat Wales). Michelle has run both 5000m and 10,000m for Shetland in the bi-annual NatWest Island Games four times, in Lerwick (2005), Sandown (2011), Jersey (2015) and Visby in Sweden (2017). She was West District XC Champion  in 2015, 2016 and 2018. It is notable that Michelle’s personal bests (for 3000m, 5000m, 10,000m, parkrun and 10k) have all come in 2017 and 2018, after she moved into the W35 age-group. In 2016 (Glasgow), 2017 (Derry) and 2018 (Swansea), she took part in the prestigious British and Irish Masters International, running very well for Scottish Masters: obtaining W35 individual bronze and team gold in Glasgow; finishing fourth individual in Derry (team silver but in front of England); and winning the W35 title in Swansea (team bronze). Michelle Sandison also secured W35 bronze (and GB team silver) in the 2018 World Masters cross-country in Malaga.

Marianne Savage, Central Region AC, was another endurance runner from the 1980’s with a marathon best of 3:12:13.

Elaine M. Scally  (Our Lady & St Francis Sch, Shettleston, Edinburgh,  26 January 65) came from a very good family of distance runners starting with Allan Scally, and including her Father Bill, uncle Frank and brother Brian.   She herself was a Scottish internationalist on the hills, over the country and on the track.   With best times on the track of 2:19.9 (800m),  4:37.7 (1500m), 9:56.72, (3000) and 17:51.59 (5000m) she was well equipped for cross-country and road running. Her running in the national road relays was notable.  Read her full profile.     Ranked for many events such as high jump, javelin and pentathlon, after marrying John Mackay in 1984 she returned to competition and specialised in distance events winning Scottish international honours on the road, track and as a hill runner..

Susan Scott (26/9/1977 , Glasgow AC, City of Glasgow and VP City of Glasgow) was the first Scottish woman to record a time under 2 minutes for 800m; raced for GB in the Olympic Games, World Championships and European Indoors; and for Scotland at the 2002 and 2006 Commonwealth Games (finishing fourth in both finals). Susan won British titles: the AAA 800m (2002 and 2005); and the Indoor 1500m (2009). She won the Scottish 800m title five times between 1998 and 2005; 1500m in 2004 and Indoor 1500m in 2006. In the 1997 Scottish National XC, Susan finished third under-20 and led Glasgow AC to the team title. Susan Scott raced cross-country for Scotland three times as a Junior (including a 1998 Celtic Nations match at Belfast, when she was second under-23 to finish and Scotland won, beating Wales). Susan also represented Scotland at cross-country three times as a Senior and was a team scorer on each occasion. Do read her complete profile.

As an international 3000m athlete she was also a very good cross-country runner who won the SWCCU title in 1978 and 1979.   She also ran for Scotland in the world cross country championships in 1977 at the age of 17.   There would have been more but for the fact that she was snapped up by Clemson University in America and did most of her running there for some of her best years.   Read her full profile  here .

Karen Skelton,     (Cumbernauld HS, Shettleston Harriers) was a good all round distance runner for Glasgow in the early 1980’s with a best time for 3000m on the track of 10:15.22 in 1982 which ranked her eleventh in Scotland for the distance.

Marjorie Small (Clydesdale Harriers) came to the sport late but enjoyed running on the road and over the country but found that hill running was her forte and where she met with most success.   Seventh in the Fell Runner of the Year competition in 1989, she was eighth in 1990 and fourth in 1991.

Megan Smith  (Edinburgh University, 19.04.74) Megan ran for the University and raced well enough to record a 5000m time of 17:23.89, which  was ranked ninth in 1995.  She ran for Scotland in three World  Mountain Running Trophy Championships.

Moira Sprang  (Bishopbriggs HS, Shettleston, Glasgow University,  02. February .68)  Moira was a good runner on all surfaces but best on the track where as a member of the British Milers Club she supported the club and benefited from it.   Best times on the track over her specialist distance of 800, was 2:13.0 in 1986 when she was just 18.

Anne M Stafford (Bathgate 1954-)   was a good middle distance runner with best track times of 63.1 for 440 yards, 2:26.3 for 800m, and 5:26.2 for the Mile.   Also a very good cross-country runner and her club, Bathgate, was going through a ‘purple patch’ at the time and the girls teams were among the prizes in all age groups from Under 13 up in almost every year with Anne being a member of several medal winning teams.   Individually, she was fourth in in the Intermediate age group in 1970. 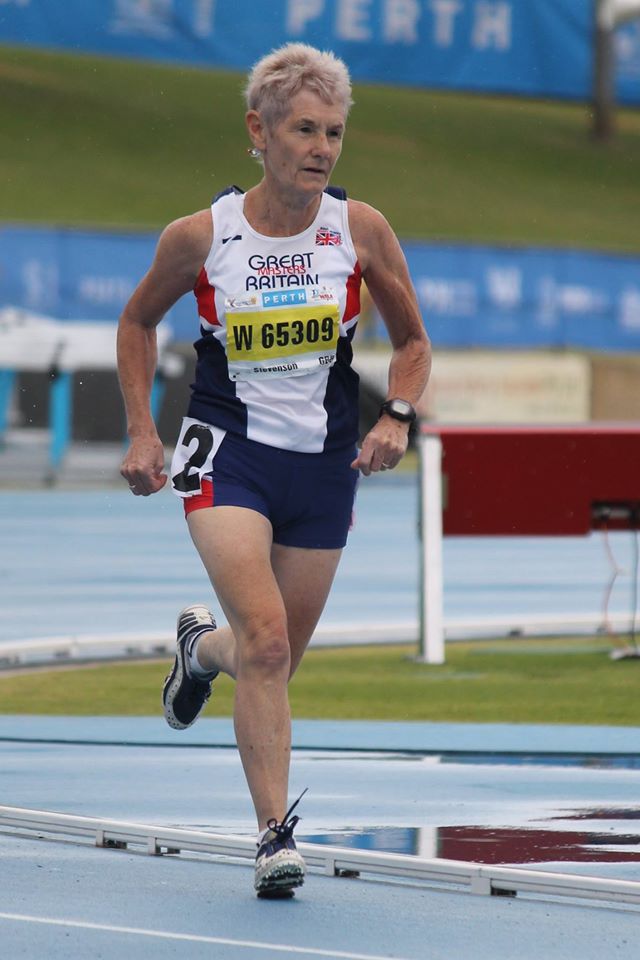 Hylda Stewart (Clydesdale Harriers) has been running on the track on the road and over the country since the 1980’s at events from 1 Mile to the Marathon.   Despite living in the South West of England for several years now (which explains her results in the Dartmoor Vale Half Marathon, Plymouth Half Marathon, Torbay Half Marathon, Frome Half Marathon and several others plus a multitude of Park Runs at Parke, Exeter, Killerton, Barnstaple and many others.

Mary Stewart ( Birchfield, Lewisvale  Spartans 25 February 56) One of the famous Birmingham Stewarts, like her brother Peter Mary ran for Scotland, and ran well too, before transferring her allegiance to England in 1977.   Her track competitive record is impressive, see the following, taken from the www.scotstats.com website:

Rosemary O. Stirling (Bilston Town, Wolverhampton & Bilston 11.12.47)   Rosemary Stirling was one of Scotland’s most loved and respected middle distance runners, and was one of the gold medal winners at the 1970 Commonwealth Games.  Her competitive record on the track is recorded by the www.scotstats.net website as follows:

Mildred Storrar was an outstanding athlete who ran for Dundee Hawkhill Harriers in the 1930s. In the Scottish Athletics Championships, she won the 880 yards title in 1934, 1935 and 1936, as well as a silver medal (behind Connie Johnston of Maryhill Harriers) in 1933. In the Scottish Cross-Country Championships, Mildred won the title in 1934, one second in front of Connie; and DHH secured team victory. In 1935, Mildred and Dundee retained their titles. In an International cross-country match v England, Mildred Storrar finished ninth (third Scot behind Connie Johnston and Jean Tait (of Clydesdale Harriers). In 1936, Mildred won the Scottish title for the third time, but only four seconds in front of Jean Tait, who became champion in 1937. However, Mildred Storrar (representing Merchiston Ladies) regained her Scottish cross-country crown in 1938.

Between 1981 and 1985, improved dramatically as a marathon runner to set a Scottish National Record (2.33.38) when 7th in the 1985 London Marathon. In May 1983, she won the Motherwell Marathon (2.46.47); and followed that in September by winning the Aberdeen Marathon (and Scottish Women’s title) in 2.50.29. Lynda retained her Scottish title by winning Aberdeen again in 1984. Her 2.41.41 took three minutes off Leslie Watson’s Scottish Native record.   Then she ran for Great Britain in a Czech marathon. Then came 1985: running for Scotland in the World Cross in Lisbon; a Half Marathon best of 73.22; that superb Scottish National marathon record in London; and being part of Aberdeen AAC’s winning team in the SWCCU Scottish Road Relay Championships. Even in 1995, after years of injuries, Lynda Bain (Garioch Road Runners) won the Moray Marathon.

Audrey Sym  (Ayr Seaforth, Glasgow, Glasgow University, City of Glasgow, 2 August 66) was a good and highly respected athlete who ran for Glasgow clubs for a period of approximately ten years spanning the ’80s and 90s. Her best times were 4:46.01 for 1500m, and 9:41.0 for 3000m.   Audrey was also a good cross-country runner with several top ten places in the national championships, including individual bronze in 1993.  In the 1988 Scottish Championship Half Marathon, she finished second. Audrey ran for Scotland seven times. Four Road Internationals: 1987 Glasgow 10k; 1988 The Hague Half; 1988 Glasgow 10k – 5th/3rd Scot; 1993 Swansea 10k 4th/first Scot, team beat Wales. Two cross-country Internationals: including 1996 when she finished second Scot and the Scottish team beat the English Midlands and Wales. On the track, in 1988, she raced an International 3000m v Greece and Cyprus and finished third. 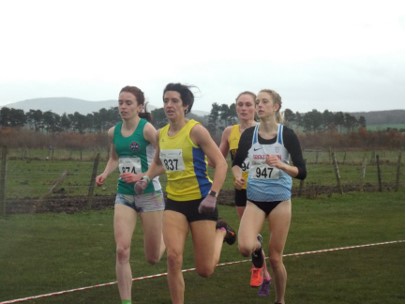