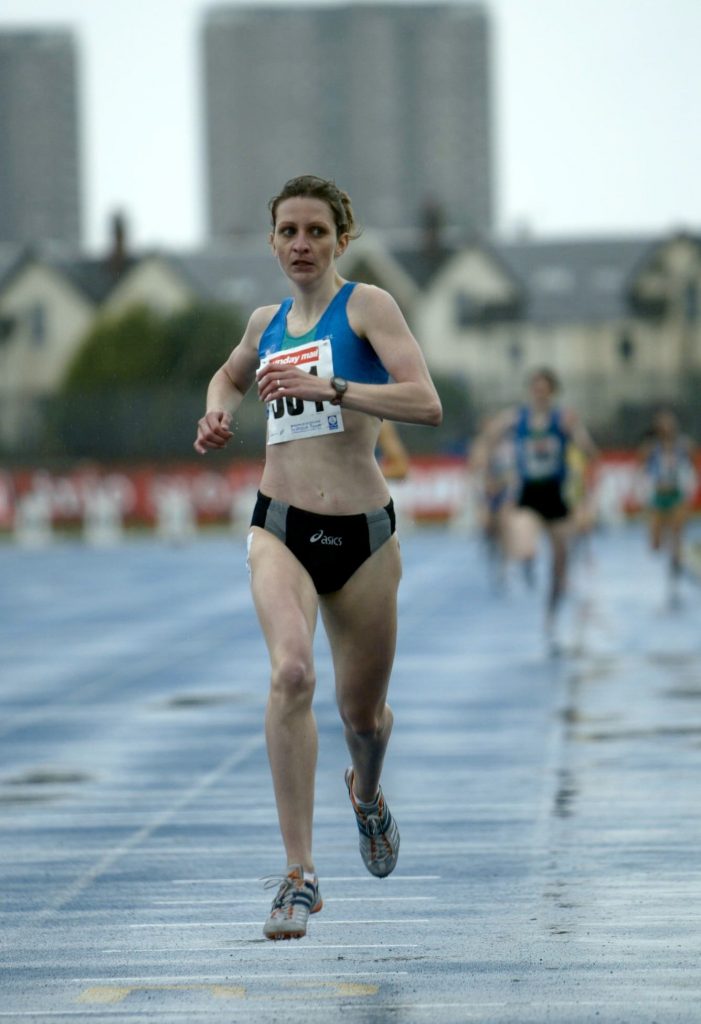 “ATHLETE OF THE DAY – SUSAN SCOTT
The first Scottish female athlete to better 2 minutes for 800 metres, she twice finished 4th at the Commonwealth Games. She featured in the Scottish rankings between 1992 and 2009 topping the 800 rankings on 8 occasions and 1500 on 5. 7 Scottish titles, 3 British titles and appearances at Olympic, World and European Championships. She held the Scottish 800 record from 2002 until bettered by Lynsey Sharp in 2014.”

Cross Country: As a Scottish Junior International, she earned 3 XC vests between 1996 and 1999 – including an under 23 victory in the 1999 Celtic Nations at Cumbernauld.

As a Senior XC International (1997-2000) Susan represented Scotland on 3 occasions.

Below are excerpts from a detailed profile of ‘Tommy Boyle, Master Coach’, which is on the website Anent Scottish Running.

“Fate intervened once more in 2000, when Tommy was asked to take on a young athlete – Susan Scott.

Susan Scott (born 26th September, 1977) was a considerably good runner who was originally trained by John Montgomery before she came under Tommy’s wing.   For the bare facts, her Wikipedia entry reads as follows:

Tommy Boyle (who described Susan Scott as ‘a challenging athlete as deep as the ocean’) agreed to coach Susan on the clear understanding that it would be within the constraints of his time.   However, Tommy now had perfected a tried and tested methodology. Myra Nimmo agreed to help in her spare time again and no stone was left unturned in the pursuit of excellence. However, by this time we had an Institute of Sport and that solved a few issues for Tommy.    He says perhaps it is best to read his 2005 lecture on Susan but once again proved just how good a coach he was in taking a 2.08 athlete to such heady performances.

Tommy added: “I was very fortunate to have the support of my old pal, Frank McMahon, who was Susan’s Minder whilst she did weights in Local Authority Gyms.   Frank, pictured below with Susan, called a spade a shovel – just what she needed to bring her out of her very deep shell.   Frank was also great support when he came out to Melbourne with us for the Commonwealth Games in 2006. 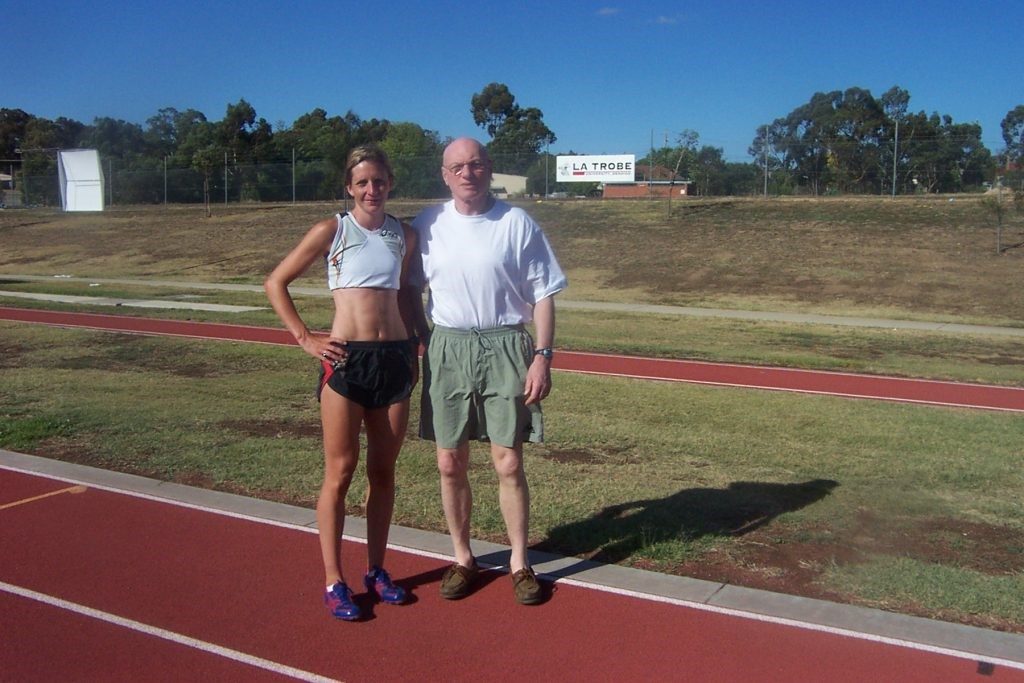 A measure of the preparation Tommy did for Melbourne was contacting the head coach at Bendigo athletics Club, Peter Barratt.   Peter could hardly believe Tommy would trust him with his top athlete.   However, he arranged everything for Susan including the critical training partners and supported her in a very successful series of three races which she won before the Games.   She is pictured below with the Bendigo training team and some club members. 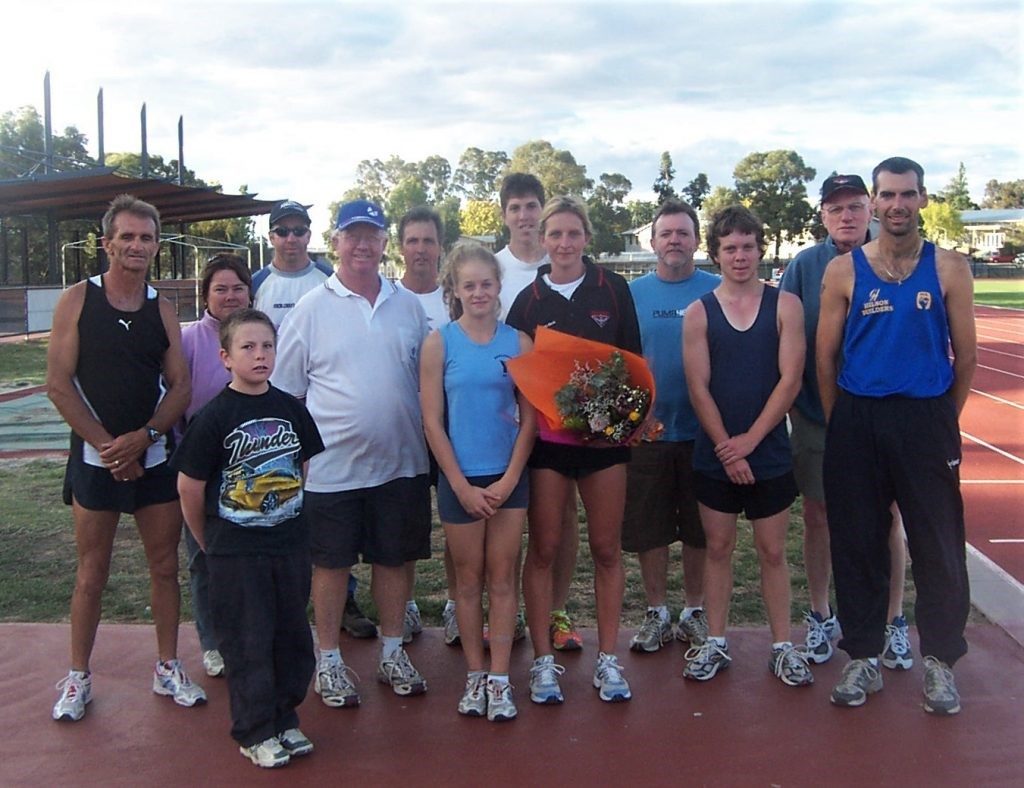 In a ‘Scotsman’ interview, Tommy Boyle mentioned as one of his proudest moments “Susan Scott breaking the Scottish record at two successive Commonwealth Games – first in 2002 in Manchester and then in 2006 in Melbourne.”   His pride is entirely justified in that, the first time she broke the national 800m record, it was one that had been in existence for all of 30 years and had withstood attacks by such big talents as Ann Purvis, Margaret Coomber, Christine and Evelyn McMeekin, Lynne McDougall and others.   The fact that she then retained the record until 2014 is another testament to the value of the time.”

In late 2006, Susan Scott wrote this about herself:

“I am a quiet unassuming person with a burning determination to succeed.  I have dedicated my life from the age of 9 years, to athletics, having been inspired by Liz McColgan at the 1986 Commonwealth Games in Edinburgh.   My determination, dedication and passion for my sport have allowed me to compete at the highest level for both Scotland and Great Britain.

I currently live in Motherwell and train, on average, 10 times per week in order to sustain optimum fitness and performance.

I am a fully qualified cardiac technician currently working 3 full days in Glasgow’s busy Victoria Infirmary.  My role is both physically and mentally demanding.

I am a Scottish Institute of Sport Athlete and currently receive invaluable assistance with physio, nutrition, sports medicine and facilitation from the Performance and Excellence Manager.  This support infrastructure has been a vital factor in my progress to date.

In order to achieve my dream, it is clear that I need to change my lifestyle.  The personal sacrifice I made by taking 2 months leave to train full-time for the Commonwealth Games experience, Melbourne, resulted in 4th position but a new Scottish Record.  Most importantly, this proved to me conclusively the direction I must take in the future and level of commitment required if I am to make that vital push for the summit of World Class Performance.”