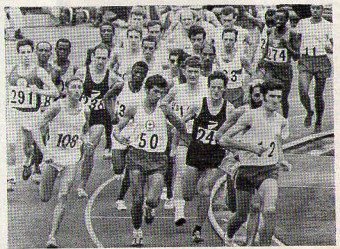 There are many pages on various aspects of the marathon on the site now and they will still be available from the page they’re on but it is maybe a good idea to have a single marathon index for those who only want to access these pages.   There are references to marathon runners and races on some other pages – it would be a strange website about endurance running that did not have them – but this is the one-stop shop for the event.

A Hardy Race : The record of results in all Scottish Marathon Championships, compiled by Fraser Clyne and Colin Youngson and reprinted here.

Marathon Stars : This is the page about the very top marathon runners with fairly lengthy profiles about the men who made the event in Scotland what it is.

Career Lists for Scottish Marathoners: The lists for all the marathons and ultra marathons run by Scots such as Allister Hutton, John Graham, Alastair Wood, Don Ritchie, etc

Scottish Marathon Club: This is about the club that was founded in 1944 with the objective “to foster marathon running in Scotland”

The Birth of the Scottish Marathon Club:  is what it says.

The Marathons : The various marathons run in Scotland – the story of the race and the results – during the ‘running boom as well as before and after that period.

The Road Runner’s Year: A look at the organisation of the year for the road running specialist.   In four parts it looks at the traditions and training, and attempts a look forward.

Scottish Marathon Miscellany : This is a collection of interesting, sometimes strange, facts about the marathon in Scotland.

The Vancouver Marathon: This is about the Empire Games Marathon in Vancouver which was won by Joe McGhee in unusual circumstances.

Jim in Jamaica: The story of Jim Alder’s victory in the Commonwealth Games Marathon in Jamaica

Mike in Mexico : The story of Mike Ryan’s third place in the Mexico Olympic Marathon

1980 GB Ranking List : GB Marathon Rankings from 1980 when the Running Boom was encouraging more runners to produce faster times.   Every marathon from the fastest down to the 4 hours mark.