“ATHLETE OF THE DAY – Morag MacLarty 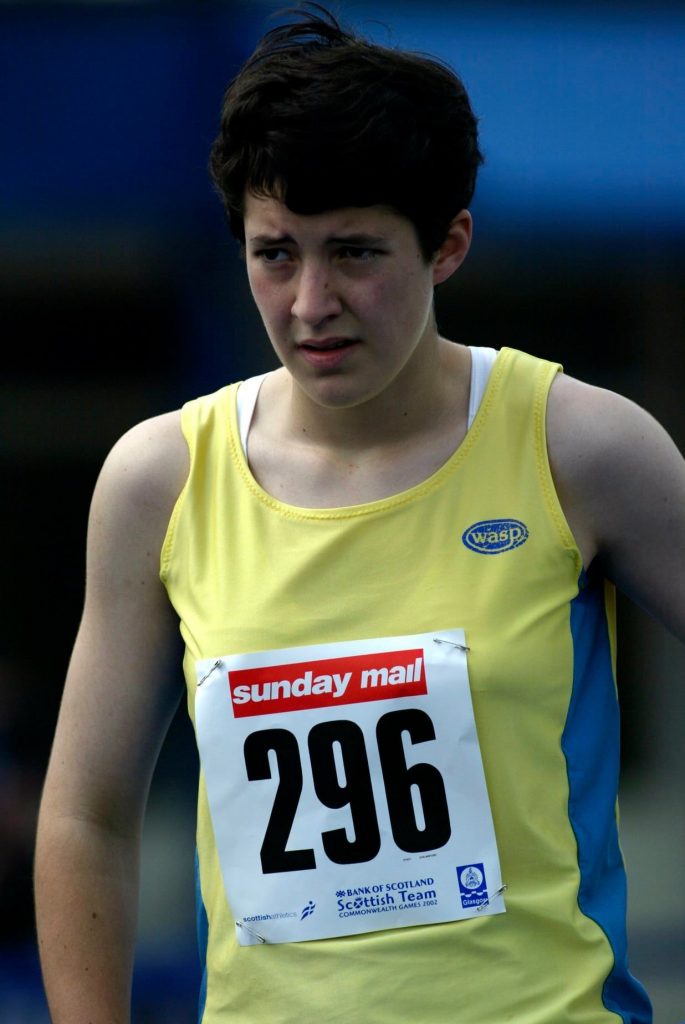 Before we go on to look a bit more closely at her career, we could maybe look at a profile that was done for the Scottish Athletics Yearbook for 2002 to see how it all started and what her goals and ambitions were then.

Greatest Personal Satisfaction: Winning 800m at British Schools International in a Scottish record of 2:07.25 and then winning the 1500m a hour later clocking another PB.

Greatest Performance Seen: Jonathan Edwards when he came from behind to win the World Championships in Edmonton.

Greatest Rival:  Anyone with a better PB than me.     Coach:  Derek Easton

Suggestions for improvement in your event – More big races in Scotland

Suggestions for improvement in athletics: Bigger and faster detection of drug cheats.   Family involvement: My 2 brothers and sister also take part in athletics.

That was what Morag thought about the sport as a 15 year old – in 2004 she travelled with the Scottish team to the Commonwealth Youth Games in Australia.    The picture below shows the members of the team after the Games with their medals.   Morag is third from the left in the back row with her 1500m gold medal. 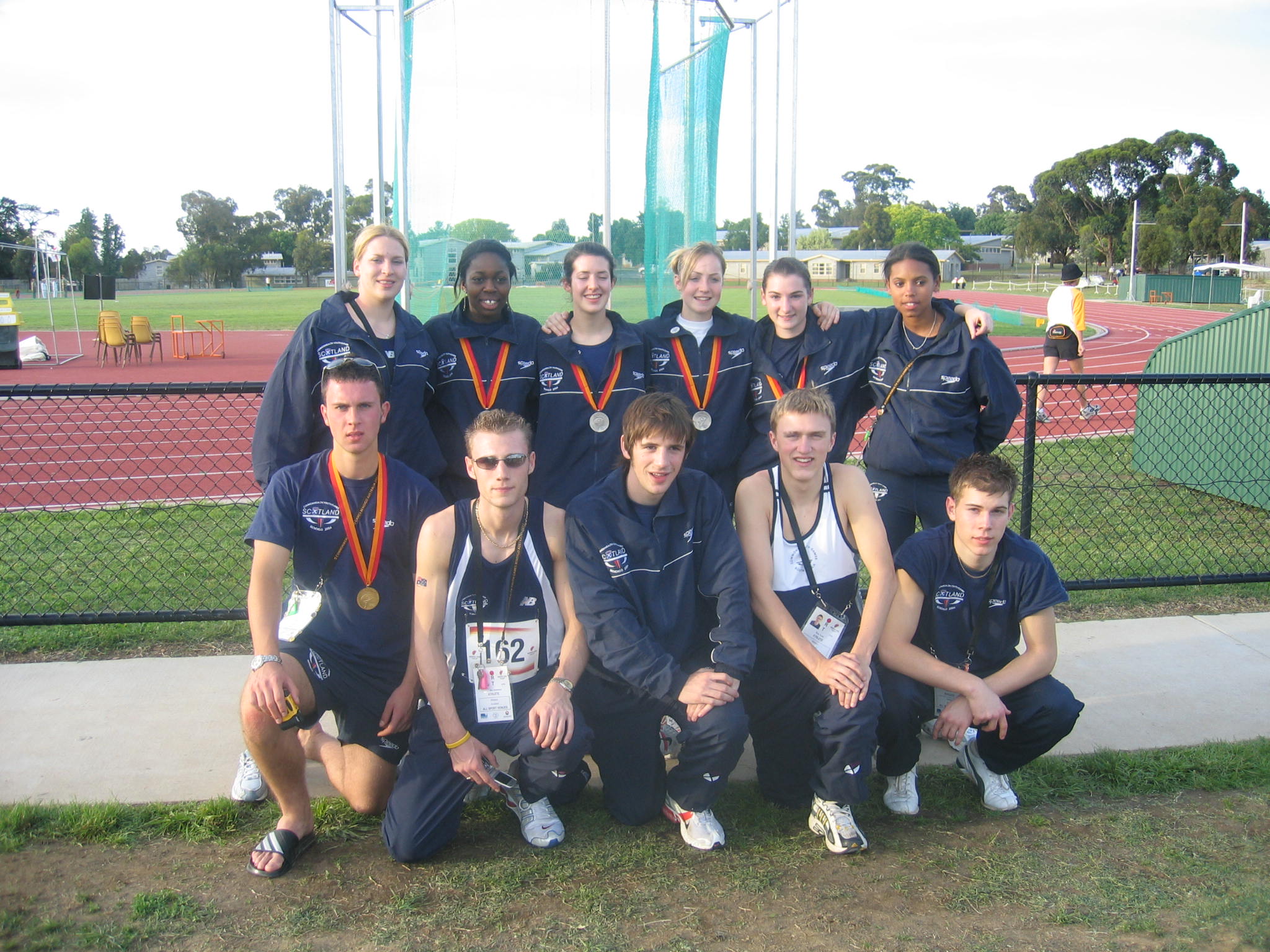 There was a very good article on Morag written by Natasha Wood, Senior Sports Writer for the Sunday Herald and reprinted in the SATS yearbook for 2006.   You can read this excellent item at this link.

Morag MacLarty was a brilliant and consistent young athlete who, after injuries, went on to become a successful team leader as a mature athlete.

In ‘The National’ newspaper on 25th November 2016, Susan Egelstaff wrote the following:

“SPORT, as does life, all too often fails to follow the script. This is what makes it so intriguing to watch but unfortunately for Morag MacLarty, she has been forced to face the brutal reality of sport deviating from what has been predicted.

As a junior runner, MacLarty was one of the most promising athletes in the country. She won European Junior 1500m gold in 2005 and ran the fastest 1500m of any junior in Europe. She won Commonwealth Youth Games gold and was Scottish junior champion many times over.

To say that things looked bright for the runner from Auchterarder would be the greatest of understatements.

Possessing natural pace as well as endurance, much was predicted for MacLarty and when she was selected for her first Commonwealth Games – in Melbourne in 2006 – aged just 20, it seemed the world was her oyster.

However, MacLarty has many qualities but she was has not blessed with an abundance of luck. Injury began to plague her and she admits that she struggled to cope with failing to live up to the potential that so many observers had talked of.”

“Getting injured so much makes you feel like you’re not talented,” she says. “It was hard – everyone was talking about my potential but I was never able to put together enough races together to realise that potential.

“I feel like a completely different person now compared to all those years ago – it doesn’t feel like it was me that people were talking about.”

In 2010, MacLarty was running so well that the 2010 Commonwealth Games were a realistic target.

However, after picking up a stress fracture during the qualifying period, she admits she became so demoralised that she seriously considered quitting the sport. But she stuck at it and now, things are beginning to look up.

While MacLarty, who runs for Central AC, remains reluctant to make any grand predictions, she admits that it is encouraging to begin to see improvements in her form.

“I’ve been around for a long time but over the past year, I felt like I’d been putting a lot in but when you don’t get anything out, it’s tough,” she says. “But I do feel that things are changing for me.

“I’m getting fitter and stronger all the time so that’s good. I’m really happy with everything, I’m in the best place I’ve been in for ages.”

The biggest factor in MacLarty’s resurgence has been the identification of a leg-length difference, from which all of her injuries were stemming.

MacLarty describes her injuries as being so bad that at one point, she could not even walk down the street pain-free.

However, the discovery of “a gem of a physio” has now allowed her to train for a sustained period so the physical effects of her injuries are healing but the mental scars can be harder to heal. However, the full-time dentist is aware her lower training load could turn out to be of benefit.

“Now that I’m older, I’m finding it much harder to do well and I’m not sure why that is because surely if you’re talented when you’re young, you’re talented later too,” she says. “But there’s a book called ‘Bounce’ by Matthew Syed and it talks about when you see someone doing something great in competition, you think: ‘They’re so talented’, and there is talent but actually, there’s all that hard work behind the scenes too.

“That book helped me because it made me think that I’ve not had the chance to do all of the hard work and even though I’m getting older, my legs are still only aged 25 instead of 30.”

“The Games have definitely come into my thoughts,” she says.

“I’ll look at the 5000m but Scotland are so strong at that event so I might also look at the steeplechase.

“I don’t feel like anybody within Scottish athletics thinks that I’m going to do anything ever again and I can’t blame them for that because if you looked at the past few years, you’d probably agree with them. But I’m just going to keep on doing what I’m doing and see what happens.”