Scenes from the 1983 Race: change over at the end of stage three

The Edinburgh to Glasgow Relay was the best and most prestigious race in the Scottish Athletics Calendar second only to the National Cross Country Championships of Scotland.   Many would say that it was the best bar none.   Simply put it was a relay race starting in Edinburgh and finishing in Glasgow.   It had eight stages, each of a different length and was held on the third Sunday in November each year.   If that’s all it was, then it was nothing special BUT:

*   It was an invitation only race and limited to twenty clubs.    The clubs started talking about the event from the start of September, club teams were selected from the relays in October and most clubs, when I started running in it, had their own E-G trials which went by the board after the Glasgow University Road Race appeared on the scene and the Allan Scally Relays latterly were also used as trials for the race.   Places were hard fought for and stages were allocated according to arcane rituals – some clubs ran their team weakest first and tried to work their way through the field, some used to run their best men first and fairly often if a club only had one or two good athletes they just ran them first to give them a hard race!   I seem to remember Strathclyde University running Frank Clement and Lawrie Spence first and second and then the team finished nowhere.   I stand to be corrected on that one.

*   It was unique in that you were often running blind and could not see the runners ahead of you.   Runners were often/always running for their team mates and it was the only really club team contest on the calendar.   One of my own best performances was when I picked up four or five places on the fifth stage – but it was all down to Ian Donald on the previous stage running blind all the way and just when he got some runners in his sights, he had to give me the baton.    One of the races of which I was most proud was taking the baton on the seventh stage and picking up form sixteenth to fifteenth (the first fifteen teams were automatically in the race the following year) by switching about the road to get the best line through bends, hiding from the view of the Law runner in front when he looked back and so on.

*   And it was the grandest affair you could imagine.   When I started, it was organised by the News of the World newspaper – the race was also known as ‘The News of the World’ to the older guys – who provided nine buses (one for each stage and one for the stragglers, limousines (I mean Rolls Royces and Bentleys) for the officials and a slap up meal for one and all in the Ca d’Oro Restaurant in Glasgow after the race.   Oh, aye, and the results of the various stages were available on the day as the race progressed – eg the results of the first stage were available at the start of the third, of the second at the start of the fourth and so on.   Even when austerity hit the race standards were lowered as little as possible – eg buses were reduced in number from nine to four each to cover two stages of the race, when the NoW removed its sponsorship in 1967 the programmes  were still well produced, results were available on the day and a meal was served up for the Presentation in the Strathclyde University Staff Club through the good offices of Alex Johnstone.   Latterly sponsorship was by Barr’s of Irn Bru fame courtesy of Des Yuill, programmes were skimpy in comparison and the meal was a roll, a biscuit and a cup of tea at Crown Point – but THE RACE WAS THE THING.   Times were compared, post mortems were held and traditions were set and maintained for generations of runners.

Stories were legion – eg every club had a Man Who Walked In The E-G.   Vicky Park’s was Alby Smith on the fourth stage just overwhelmed by the occasion,  Clydesdale’s was Norrie Ponsonby (who said on the following Tuesday that he was going to retire from the sport all weekend until he realised that folk would just say “who’s Norrie Ponsonby?”), Greenock Glenpark’s was Ian Hopkins and the greatest of them all was John Robson who allegedly threw the baton into a field halfway through the third stage when ESH were leading.   The story ran the length of the other clubs who were still racing and rumours were rife of various things that might have happened until word came through that he was back in the race, persuaded ‘by four big shot putters from Edinburgh!’.   Alistair Blamire ran a brilliant race to bring the club back into real contention but again a lot of the credit was allocated to the guys who picked up the place after him.

I have placed a two page article on the page with the Programme Extracts about the different standards of the different stages and would suggest that you have a look at it.   The following says a lot about the race – how supporters could get so carried away that they forgot the run who had just done his stint and how the runners and clubs looked out for each other.   A special kind of race. 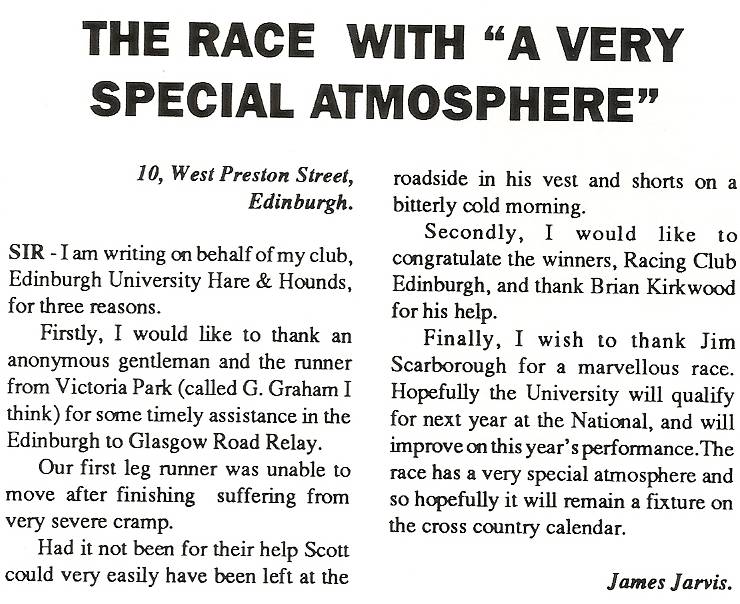 Colin Shields had a whole chapter in his history of Scottish Cross Country “Whatever the Weather” which should be compulsory for anyone interested in the race.and Colin Youngson wrote some stories, thinly disguised as fiction, about the race in his book “Running Shorts” and he has kindly allowed me to print his story about the ‘Inter City’ here – just click on the link for ‘The Inter City’.   Finally the results of all E-G Relays can be found on Ron Morrison’s site which is a real treasure trove of statistics and information – all the results, all the programmes, all the reports on the races.   Access it via

Undoubtedly, the number of good, fast Scottish distance runners was greater in each year from the mid-sixties to the mid-eighties, compared to nowadays. A major reason is the loss of Scottish participation in the World Cross after 1987. Another is the demise of the Edinburgh to Glasgow Road Relay, which motivated so many runners to develop speed, stamina, determination and ambition.

The Race In Pictures