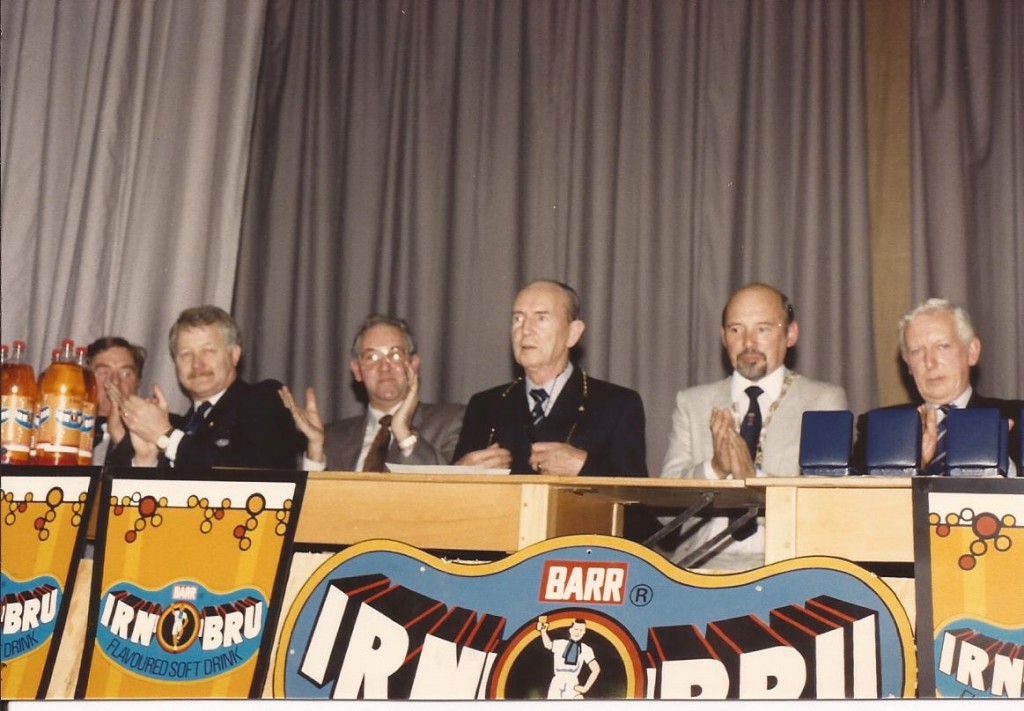 The Edinburgh to Glasgow Relay was a great place for meeting people and for making new friends.    The excitement was such that you all spoke to each other.   Questions like “How much has he got on them?”    or   “Can he hold it?”    or   “Who’s your next man?”   “Where did they get HIM from?”     “What’s happened to your runner then?”   Or just chat on the bus – on my first race, a wee guy got on, sat down beside me on our way to the third leg, and said that he was really pleased, he’d always got the long leg and couldn’t get a pint at Forrestfield but this year ….    It was Harry Fenion and we always spoke after that and ended up buying each other tea and fudge doughnuts at Crown Point every Tuesday!   The chap from EAC whom I asked about the runner on the stage asking which of the Knowles twins that was, getting the reply, he didn’t know because he only came up for the E-G and the National.    Then on the first and only time that I ever ran the fourth stage, Andy Brown showed me and one other where to have a pre-race pee – in the farmer’s cow shed!   There were lots of these wee incidents.

Like the time I ran on the third stage having taken over in a kind of no man’s land and handing over having gained a place when I didn’t believe I had passed anyone.   Turned out to be a guy from St Andrew’s University (Gomersall???) .   The following year when I was at Jordanhill I ran for the College against Ayr Seaforth and St Andrew’s in the half mile, mile (gubbed in both by Jim McLatchie), three miles (gubbed by somebody else) and the six miles where I was beaten by a chap called Rough from St Andrew’s.   Trudging up from the 6 laps to the mile track (I had run 60 laps plus warm ups!   Total madness)   with him I asked how he had run in the E-G and the reply was that he didn’t race during the winter, he played football.

The strangest incident that I saw in the race was when Hughie McErlean of the Vale of Leven ran the fifth stage only to find that his team mate was not waiting for him, nor was he at the back of the crowd, nor was he to be seen anywhere.   Hughie always gave everything 100% and was totally exhausted but the officials did nothing to stop him and he just carried on to do the long leg as well.    I was in an official NoW bus and as we passed I suggested to the official in charge that we should maybe offer to pick him up.   No, he couldn’t – his instructions were to go straight to the next xhangeover with no stops.   So poor old Hugh had to soldier on for 7 more miles.    Percy Cerutty had thing where if the guys were running, say, repeat 440’s, he would suddenly leap at them as they approached the end of one to shout “Another 100, another 100” and the poor runners had to stick in a further 100.   In Hughie’s case it was “Another 7 miles, another 7 miles”   Last seen pacing about saying “Just lock me in a room with him for five minutes, just five minutes…… “

Good deeds often rebounded too.   I recall that after Garscube had been out of the race for a few years, I was running on the fifth stage as was the very good runner David Martin.    He asked if we could warm up together and friendly old me agreed.  We warmed up together and talked about the course.   In the race I moved up from 14th to 11th, he moved up from 15th to 12th and he had sixth fastest and I had seventh with only 15 seconds between us.   He was still a good guy though despite being my stalker for 5+ miles.

In the 80’s I was coaching a group of runners from Cambuslang in the squad and Jim Orr had a habit of nose bleeds before really big races – eg in the Worlds in New York he noticed blood on the ground, then he saw it on his shorts and then realised that he was bleeding.   In the E-g the year he was on five, he came racing down the road with his number decorated in club colours of red and white – the red was blood, his own blood!    The blood loss didn’t affect his running though!