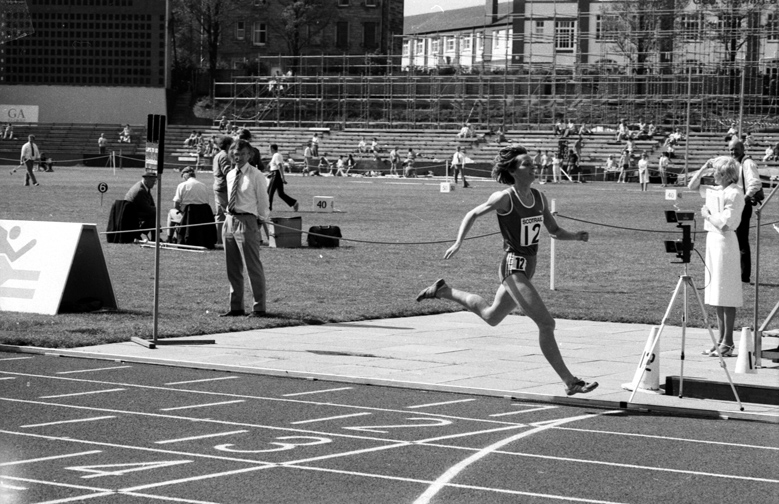 One of the questions in looking up anybody Scottish in a phone book, in a list of any sort come to that, is whether the surname is spelled Mc …    or  Mac…   Indeed there are times when people change the spelling: I know of several who have gone through several decades spelling their name Mc .. who suddenly change to Mac.   Then there are those who – however they spell the first part, switch from starting the second part with a lower case letter than the formerly favoured upper case.  eg McDonald might become MacDonald or even Macdonald.   This section will deal with both forms of Mac – all the Macs first, then all the Mcs.   And we begin with

Linsey MACDONALD (14.2.1964 Pitreavie AC) was best known as a brilliant young sprinter who ran for GB in the 1980 Olympic Games, finishing 8th in the 400m final; and winning a bronze medal as part of the 4x400m Relay team. Linsey also competed in European Championships and Commonwealth Games. She is included here, in a distance-running history because, later in her career she won three silver medals in Scottish Championships: two for 800m (1987-1988) and one for 800m Indoors (1990). Lynsey Macdonald also ran four International 800m races for Scotland. Surprisingly, Linsey raced one Junior International cross-country race in 1981. This took place at Mallusk, Northern Ireland. Linsey finished second Scot (behind Liz Lynch (McColgan) but in front of Yvonne Murray) and Scotland lost to England but beat Wales, Northern Ireland and Ireland.

Deborah MACDONALD,  (Lasswade AAC, Hunters Bog Trotters) is a good runner who has run well on all surfaces including in the hills where she was third in the Scottish Hill Running Championships in 1996.   The love of hill running and the outdoors has been taken further, as a sailor, in the Island Peaks Race in 2009.   She is also a regular cross-country runner for both her clubs running in East League races, National Championships and relay championships.   Karen MacLeod’s sister, she says she never did any training but loved ot race frequently doing three races in a weekend and, during the summer months, 5 or even 6 races a week.

On the roads she has run in the Lochaber Marathon several times where she was third in 2002 and 2005, as well as the Loch Ness Marathon..  Deborah has run in road races from One Mile to Marathon with best times of 43:39 (10K), 95:16 (half marathon) and 3:20:51 for the marathon. and competed in the HEBS 3 Challenge where she won the event in 2001 and 2007. The HEB 3 Challenge is to complete at least three of the Hebridean Island Half Marathons – Stornoway, Benbecula. Skye, Barra or Harris in any one year.   She ran for Scotland when a member of Lasswade, running in the Inter-Counties in Birmingham.

Lynne MACDOUGALL (18.02.65, Kings Park School, Glasgow, City of Glasgow)   Lynne MacDougall is a superb athlete by any measure.   She has run in an Olympic final, European Championships, Commonwealth Games and won British and Scottish championships.   Over the country she has won Scottish cross-country championships at Under 13, U15, U17 and Senior levels.   There was no Under 20 championship for her to contest at the appropriate time.   You really must read her full profile at this link.   . 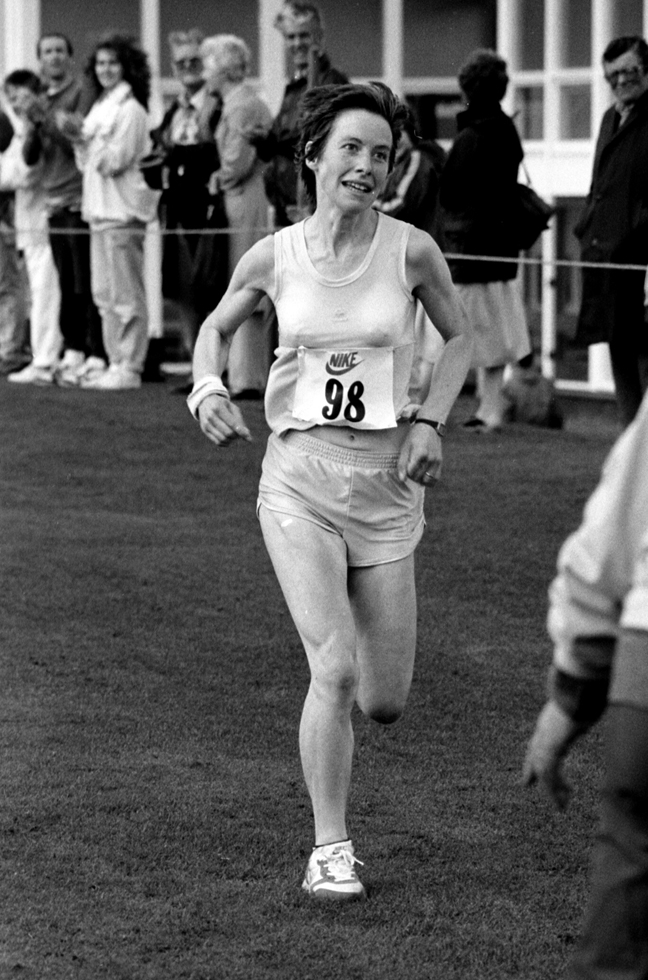 Karen MacLEOD (24.04.58, Edinburgh AC, Bath & Percy.) A top class athlete who competed in the Olympic Marathon in 1996.   Her competitive record is recorded in the scotstats website as follows:

Margaret T. MACSHERRY, (13.06.50,Cambridge, Florida State University)  later Coomber, was a very good athlete indeed – equally at home on the track and road as well as over the country and round the indoor track.   After a good career as a Scottish international athlete based in England she went to Florida on an athletics scholarship and there she stayed.   Her competition record as recorded by the scotstats website is as follows: 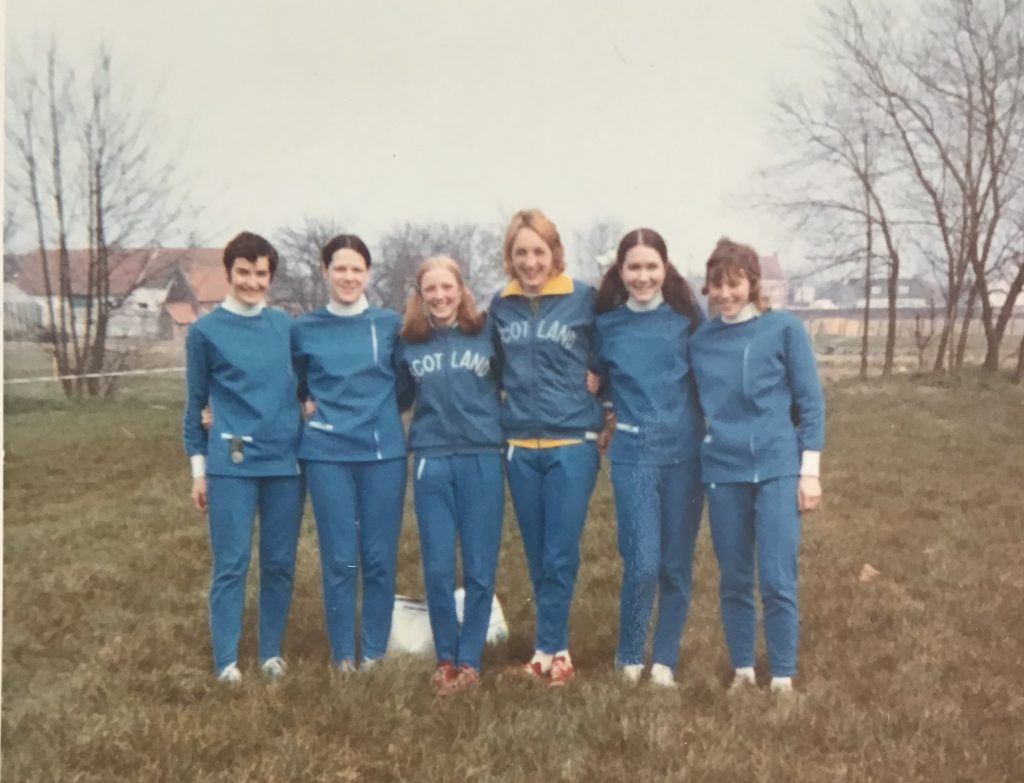 Scottish team with Margaret MacSherry, Moira O’Boyle and Palm Gunstone on the right

Her best 800m time of 2:04.1 was set when winning the UK Championship in Belfast on the 20th June 1986.    UK Championships were held in the ’80s in an attempt to get away from the English AAA being considered as the British Champs but they didn’t really get supported – probably no appetite for them from England.   She also won the Sen Indoor AAA 800m in 1985 with 2:08.63i but I don’t have the date for that event.

Pamela McCROSSAN was born on 10/6/1961 and ran for Clydesdale Harriers and the Scottish Veteran Harriers Club and started running in the late 1990s. She became an Honorary Member of Clydesdale and Ladies Captain. Pamela was first lady in the Aberfeldy Marathon in 2012 at her first attempt at the distance. In the Scottish Masters XC Championship, Pamela secured W50 silver in 2013 xc; and won the W55 title in 2018 plus bronze in 2019. In 2018, she was first M50 in the Scottish 10 Miles Road Championship. Pamela McCrossan was part of a medal-winning team on each of the five occasions she represented Scotland at the British and Irish Masters International Cross-Country Championships.

Hilary McGRATH (9.6.63, Law & District AC).  As a Scottish Masters athlete, she won many W45 and W50 Indoor and Outdoor Track titles over 1500m and 3000m. In the Cross-Country Championships, Hilary won W45 bronze in 2011; and W50 silver in 2014. For Scottish Masters in 2013, Hilary McGrath was part of a W50 Cross-Country team that won silver medals in the British and Irish International at Cardiff. They repeated this performance in 2014 at Nottingham.

Nancy McGRAW (Teviotdale Harriers)   was a good marathon runner for the Borders club with a best time of 3:07:53 and other performances between 1980 and 1987.

Toni McINTOSH was born on 26/11/1979 and ran for Stirling University, Ayr Seaforth and Central AC. In 2003, she finished fifth in the Scottish Senior National XC and then ran for Scotland at Belfast. Toni finished 25th (third Scot) and the team lost to Kenya, Ireland and England but beat Wales and Northern Ireland. She won individual silver in the 2009 National, then finished first Scot (6th place) in the Home International in Bangor, Wales. Undoubtedly, her favourite surface was road. In 2004, she raced an Ekiden Relay at Brussels; Scotland lost to Ireland but beat Belgium and France. Toni McIntosh won several Scottish titles: 10k in 2000 and 2009; half marathon in 2003, 2004 and 2009; and the marathon in 2009 (2.47.18). In the Scottish rankings, she was third for 10,000m (2004) and marathon (2009).

Sonia McLAREN (Armitage from 1991) was born on 27/10/1960 and ran for Aberdeen AAC and Cosmic Hill Bashers. She was a very classy athlete for many years. Sonia won the Scottish Indoor 1500m in 2010; secured bronze medals at 3000m; and in 1979 raced 3000m for Scotland v Wales and Israel. She ran for Scotland as a in the World Cross-Country Championships; five times in the World Hill Running Trophy; and three times in the European Hill Running Trophy. In 1996, Sonia won the Scottish Hill Running title. She was a World Masters Champion in Mountain Running and both Outdoor and Indoor track. In Scotland she won the Masters Cross Country title in 1996 (W35), 2001 and 2003 (W40), as well as Team gold with Aberdeen AAC in 1996. She helped Scottish Masters to secure several team medals in the annual 5 Nations CC International. Naturally she won umpteen Scottish Masters titles on the track, indoors and outdoors. She was a speedy, elegant runner who overcame several injuries, competed brilliantly, thoroughly deserved every success but was always modest and friendly.

Elizabeth McLEOD, unattached. In 1955, at Ayr, she finished 9th (third Scot) in the cross-country International match v England. (In the previous 1955 Scottish National Cross-Country she had been third.) Later, in the 1955 Scottish Athletics 880 yards championship, she won a silver medal behind Aileen Drummond.

Read the full profile for Christine and Evelyn at this link