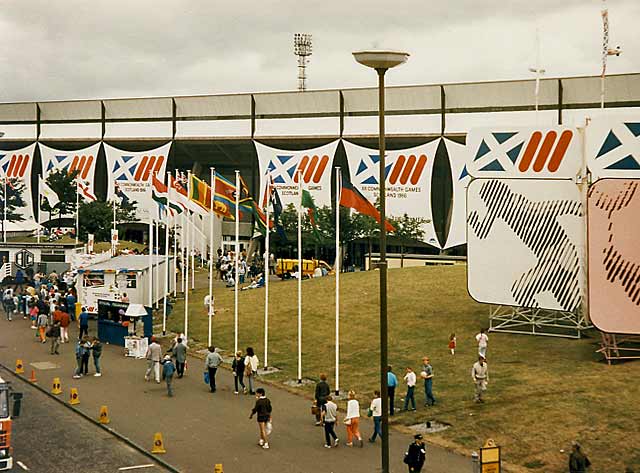 The Ninth British Commonwealth Games was almost certainly the best athletics event ever held in Scotland: the Glasgow Games in 2014 were almost as good.  There is a tendency to what has been called ‘the snobbery of chronology’ in sport: ie something is better because it is newer, or because we have seen it.   Note the preponderance of players from the last 20 years in ‘the best ever Scottish football team’ selections used to fill a quiet day at the sports desk.   But I would suggest that despite the increased coverage, the social media comments and immediate updates, despite even the Proclaimers best efforts, the Games of 1970 was the best ever sports tournament in Scotland.

Several of the best ever races are still remembered – from  Lachie’s 10000 metres on the opening night and the Ian Stewart/Ian McCafferty duel on the final afternoon, it was an altogether wonderful Games.   Some of the memories and successes should really be recorded and not forgotten.   The lay out here will be, facts and figures on this page, results, selected reports, personal memories and everything else to be accessed from the Navigation Bar which will be at the bottom of the page.  This will be in place in a couple of days.  Countries and Competitors on this page first.

It is thought by some that the Commonwealths is a small event – maybe in comparison to the Olympics but ‘small’ is not the word.   Forty four countries received invitations from Scotland as the host country.

Of these, two did not send a team: British Honduras and Brunei.

The Official History of the IXth British Commonwealth Games (compiled and edited by Willie Carmichael and M McIntyre Hood) had this to say:     “In regard to track and field athletics, it was early obvious that unless the Corporation were to implement a long-term programme of civic recreation facilities which incorporated facilities of an international standard, facilities were not suitable.   Edinburgh Corporation in 1960 drew up plans for conversion of Meadowbank to a sports centre, and eventually, after consultation with the Scottish Sports Council and other bodies, and debate, and assisted by a Government grant of £750,000 they built a superb sports complex at Meadowbank which incorporated a track and field stadium of modern design, and international proportions with a permanent seating capacity of 15,000 which was augmented by 15,000 temporary seats for the Games and an eight-lane tartan track.   In addition, three large sports halls to provide facilities for a wide range of sports were built on the same site., whereon eventually a 250 metre, 44 degree-angled African hardwood cycle track was also built.”

Plans were originally laid for 1500 competitors and officials and this had to be upgraded to 1800 with organisation of catering, accommodation, health and injury problems and so on increased proportionately.   The Scottish athletics party totalled 58 athletes and officials and they are listed below

The athletics party of 58 had only four non-competitors each of whom was an essential part of the team.   An athlete:official ratio of 53:4 is remarkable by present day standards.   The total number of athletes taking part was 545, made up of 408 men and 137 women.   There were no women entered from Antigua, Barbados, Bermuda, Dominica, Fiji, Grenada, Guernsey, Guyana, Hong Kong, India, Jersey, Kenya, Malawi, Malaysia, Malta, Isle of Man, Pakistan, Papua and New Guinea, St Lucia or St Vincent.

It was also in total the biggest number of athletes ever to contest the Empire/Commonwealth Games: 386 more individuals and seven more countries than Cardiff in 1958.

Edinburgh 1970 had more countries sending more athletes than ever before.   The venues were built in good time with some assistance from the Government.   The various sports sent ticket application forms to their constituent members before they went on sale to the public and some sessions had lower rates for school parties and for other groups such as wheelchair users.    The Scottish team was comprehensive – no officials saying that no athlete ‘would be taken along for the ride.’   The squad was really athlete-heavy and non-competitors light.   Everyone in Scotland knew someone, or knew of some one local who was in the team.   It was bound to be a popular event.

The team had  a mascot – a big teddy bear dressed in Scottish kit and called Dunky Dick – Dunky for Dunky Wright and Dick for Frank Dick.   It was rushed out whenever a Scottish performance was to be celebrated – on the first night when Lachie won, Rosemary Stirling ran on to the track at the finish and presented it to him and had to show it off to the crowd as he carried it.    A great, light hearted mascot and much to be preferred to the dreadful humans in bear-suits that we get nowadays”