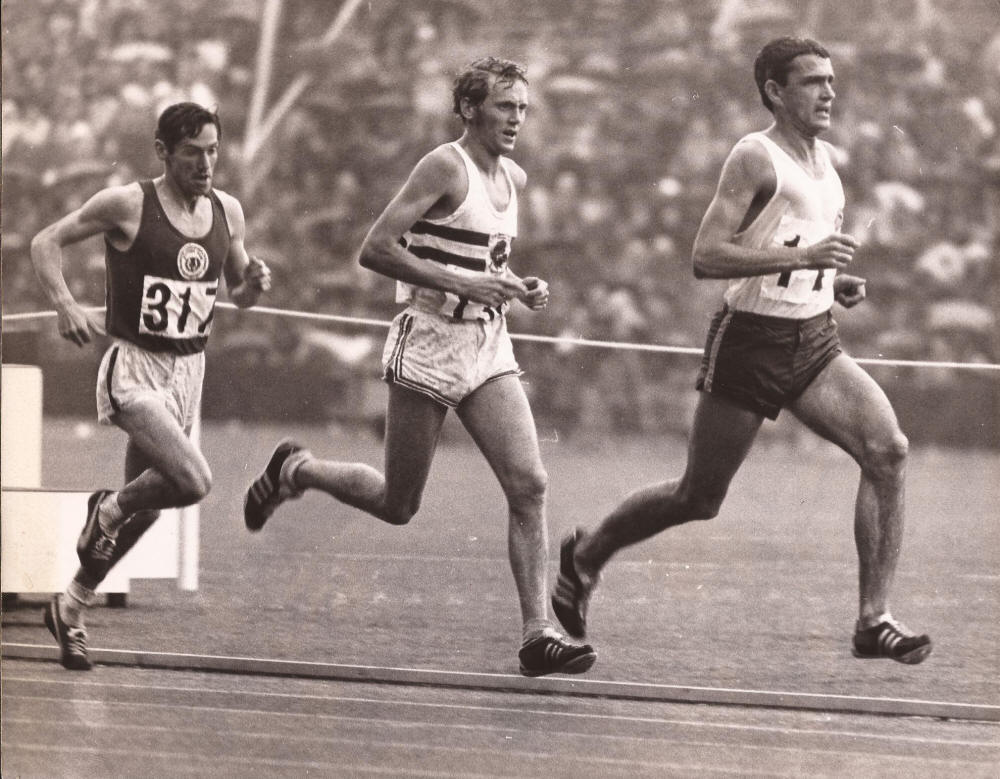 To say that, for most people, the high point of the Games came on the first night, seems to say that it was all downhill from there.   But that was not the case.    When Lachie Stewart won the 10000 metres in the rain in front of a capacity 30,000 crowd it really fired the imagination; the cliche is that ‘it set the Games alight’.    Like all cliches, it has a lot of truth in it.   The field had all the class you could want in a race such as this with the reigning Olympic champion, the world record holder and numerous national record holders and title bearers and yet Lachie – whom we all knew, whom almost all the endurance runners present had run with or against, sat beside in dressing rooms or chatted with on the train – had beaten them.   If that was how the Games started what did the whole next week have in store?   It held lots of goodies and ended with the famous one-two in the 5000m on the last day with Ian Stewart and Ian McCafferty defeating the best the Commonwealth had to offer in one of the most fascinating races of all time.   Could McCafferty have won it?   That’s another issue but the point is that, engrossing as that race was, it is still outshone in many people’s minds by Lachie’s run.   The official report says:

“The stimulus of competing in a packed stadium in front of an enthusiastic home crowd was the spur which lifted Scottish Lachie Stewart to a superlative performance in winning the 10000 metres.   The field included world and UK record holders and the reigning Olympic champion N Temu of Kenya.

Jerome Drayton of Canada moved off at a fast pace to take the lead. covering the first 1000 metres in 2:47.6 and 2000m in 5:34.8.   The next five kilometres were run around the 2:50 mark.   In the middle section of the race Northern Ireland’s Derek Graham moved into the lead.   Then at 7000m Ron Clarke moved up and quickened the pace, only Dick Taylor and Lachie Stewart staying with him.   These three kept together with the lead alternating , and with Lachie Stewart sheltering just behind Clarke and Taylor.   In the last lap, Clarke opened a gap on Taylor, but Stewart went with him and coming into the home straight, tore past to win in 28:11.8 to delirious applause from the spectators.   This was Scotland’s first gold medal in any flat race in Commonwealth Games competition.   Clarke took the silver medal in 1.6 seconds behind Stewart and Taylor won the bronze. still well ahead of the rest of the field, in 28:15.4.”

To return to my remarks at the top about this race, despite all the qualities of subsequent races – the marathon was simply outstanding, the 5000m was one of the greatest races ever – this is the one that made most impact because it was not expected.   Lachie was an established international athlete with many successes behind him and some first class time recorded already in Scotland.    It was his home track and the support was wonderful, but still …………………   Scots are great doubters, never sure of anything until the cat is in the bag.    Lachie’s victory changed that for more than just the duration of the Games.   By the end of the Games when Rosemary Stirling won the women’s 800m in the closest of finishes and Stewart and McCafferty had that great shoot-out with Keino, 1500m victor, the ball was already rolling.   We didn’t just hope, we expected.   The impetus had been given by the 10,000 metres victory and the ball gathered speed from there on in.

To complete Lachie’s year, his son Glen was born in December, 1970, and he would go on, like his father, to become a British international athlete and to do the 5000m/10000m double at the Manchester Commonwealth Games – and he too would be first British runner across the line in the 10000m.