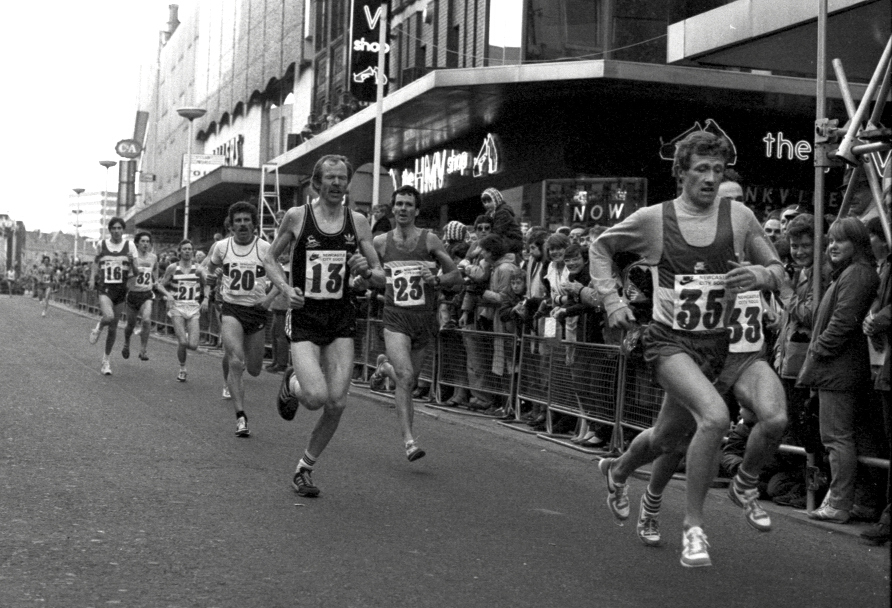 Ian HADDOW (Vale of Leven AAC) was a good club runner with the Vale (also ran for Dumbarton AAC) racing in the Edinburgh team in 1961 (3rd on first leg) as well as in championship races.

Steven HALE (9.09.63) Perth Strathtay
1988 3000S 9.43.4
Steve was a champion orienteer who represented GB in the 1993 World Orienteering Championships Relay, when his team won silver medals. Previously, he had won the East District Cross-Country championship in 1989 and 1990. In the Senior National XC, he finished a very good tenth in 1989.

Robert HALL (17.07.53) Teviotdale Harriers
1986 Mar 2.24.12.
Rob was twice a Scottish International Marathon runner. In 1987 he finished third in the Aberdeen Marathon and led his Scotland team to silver medals behind England but in front of Wales. They were second again in 1989.
For Teviotdale, he ran the E to G five times, including 1991, when they won bronze medals. In 1990 he won team gold in the Scottish XC Relay; and in the Senior National XC team contest, silver in 1989 and bronze in in 1991 and 1992.

Bob was a consistently good long-distance road runner who finished 4th in the 1959 Scottish Marathon championship.   He ran for his club in all the major championships such as the Dunbartonshire County, the Midland District and National Championships and county and district cross-country relays. 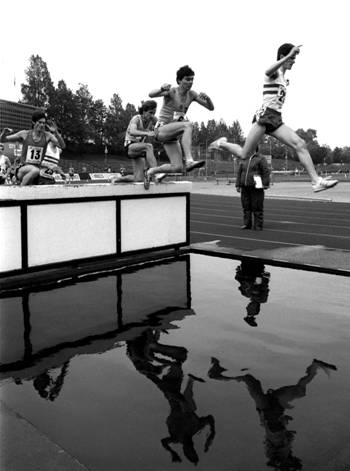 Frank HARPER (25.06.57) Central Region, Pitreavie, Carnegie.
10,000m 31.10.5 (1989); Marathon 2.18.44 (1986).
Frank was a durable, hard-training runner who became a successful Scottish International Marathon runner.
He was third in the 2005 Scottish Marathon championship. Perhaps his finest race was in the 1986 Glasgow Marathon – he set his fastest time in fourth place (1st Scot) in an international match against England and Wales. In 1988 he finished second in the Aberdeen Marathon behind his Scotland team-mate Hammy Cox. They led the Scottish team to a rare victory over England (and Wales as well).
He ran the 1987 E to G for Pitreavie AC.

Ian HARRIS (3.03.35) Beith Harriers, Army. See Full Profile
Ian was successful in cross-country, hill-running, track and road.
He was a Scottish Cross-Country International in 1961, having finished 8th in the Senior National XC; and won the Scottish Marathon championship in 1963 (famously beating the great Jim Alder); later that year, Ian was third in the challenging Ben Nevis race. In 1964 he also won the Inter Services Marathon Championship.    Ian ran the E to G for Beith in 1958, when the team finished 12th, 1959 and 1960.

In May 1949,Tommy ran the first post-war Edinburgh to Glasgow Road Relay, when Maryhill finished 5th; and also took part in six more between then and 1955. Tommy was a loyal club runner with Maryhill for decades after the War who was well known, always cheery and who had a great career as an administrator (e.g. in the Scottish Marathon Club) and official thereafter. Starting as a cross-country and road runner, he even ran in the marathon from Meadowbank when into his 50’s. As a veteran, he ran in several Scottish Masters XC races. In the very first official championship, in 1972, he secured a silver medal in the M50 age group (as he had in the inaugural 1971 SVHC event), followed by 1973 bronze and 1975 gold. In M60, he added 1984 silver; then won M65 titles in 1987 and 1989; and M70 gold in 1991 and 1992. 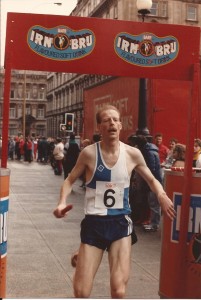 Hugh HATRICK  Glasgow University, Garscube
Hugh was a medical student at Glasgow University in the 1950’s and a successful half miler who won many events for them.   He  won the Scottish 880 yards title in 1951 (1.57.8) and later that year became a Scottish International athlete. Leaving University he returned to membership Garscube Harriers for whom he had run the E to G  in November 1949.   After his racing career he became a  member of the SAAA and represented them on the British Association of Sport and Medicine   Latterly he lived in Duns and was an Honorary Member of the SAAA.

Thomas HEARLE (5.06.67) Kilbarchan AC
1990 5000 14.14.1.
Tom was a quiet, conscientious, talented and thoroughly consistent athlete who got on with his training and earned the rewards that he deserved as an international athlete on the track and over the country.  In 1986, Tom ran the International Junior Cross-Country championships; and also became a Scottish International track athlete.
In the Junior National Cross-Country, he was fifth in 1986 (and won team gold); and 6th in 1987 (team silver).
Between 1986 and 2002, he ran the Edinburgh to Glasgow 16 times, including 1997 (team bronze), 1998 (silver) and 2000, when he was fastest on Stage Two. In the 1993 Scottish Cross-Country Relay, Kilbarchan finished second; in the 1999 Six Stage Relay, they were third and Tom was a team member on both occasions..

Angus HENDERSON (28.04.64)  Tayside, Aberdeen University, Edinburgh Southern, Bristol, Yeovil
3000m Steeplechase 8.59.84 (1987)
Angus, an extremely durable athlete, featured in the annual Scottish steeplechase rankings between 1983 and 2007, and was in the top ten five times, with a highest position of fifth.

In the 1963 Edinburgh to Glasgow Relay, he was second fastest on Stage 8 for the winning team.

John won Scottish Championship One Mile silver medals in 1954 and 1955 for Walton; and in 1957 for Shettleston.

John started his career with Bellahouston Harriers for whom he ran track, road and cross-country.  He ran the first stage of the E to G in 1986, the fifth in 1987 and the seventh in 1988.   After moving to Shettleston, he ran in the 1989 inter city race on the seventh stage, in 1990 on the fourth stage.   He ran for both clubs over the country too but he was a better track man specialising in the 800 metres distance.

Donald HENSON Victoria Park AC
Donald won the 1952 Junior National Cross-Country and Victoria Park Park were team champions. That year he won a silver medal in the Scottish One Mile championship.    In 1955 he won the Senior National Cross-Country title, leading his team to silver medals which earned him selection as a Scottish International cross-country runner.   In the Edinburgh to Glasgow, Victoria Park won the race in 1950 and 1954 (when Donald was fastest on Stage Seven).

Robert C. HERON (14.12.57)  Dundee Hawkhill Harriers, Aberdeen AAC, Brighton & Hove, Bognor Regis.  –  See Full Profile
Marathon 2.17.07 (1973) ranked 1; 2.19.18 (1974).
Rab (or, when he moved to England, Rob) was a good track and cross-country runner as a schoolboy and continued successfully as a senior athlete before he found his true strength as a marathon and (especially) ultra-distance runner. He is a hard-training, tough, determined athlete with a finely-tuned sense of humour. Nowadays he explores dark caves – quite the opposite of all that open-air exertion.
In 1973 he won the Edinburgh to North Berwick marathon in his best ever time and was ranked Number One in the annual Scottish Rankings. In the Scottish Marathon he won bronze in 1973; and silver in 1974, after a close duel with 1972 Olympian Donald Macgregor.

He finished 16th in the 1949 Senior National XC and his team won the title.

Brian HODGSON  Motherwell YMCA Harriers
Brian contributed to E to G bronze (1961) and gold (1962). In the Senior National XC, his team won the title in 1963. 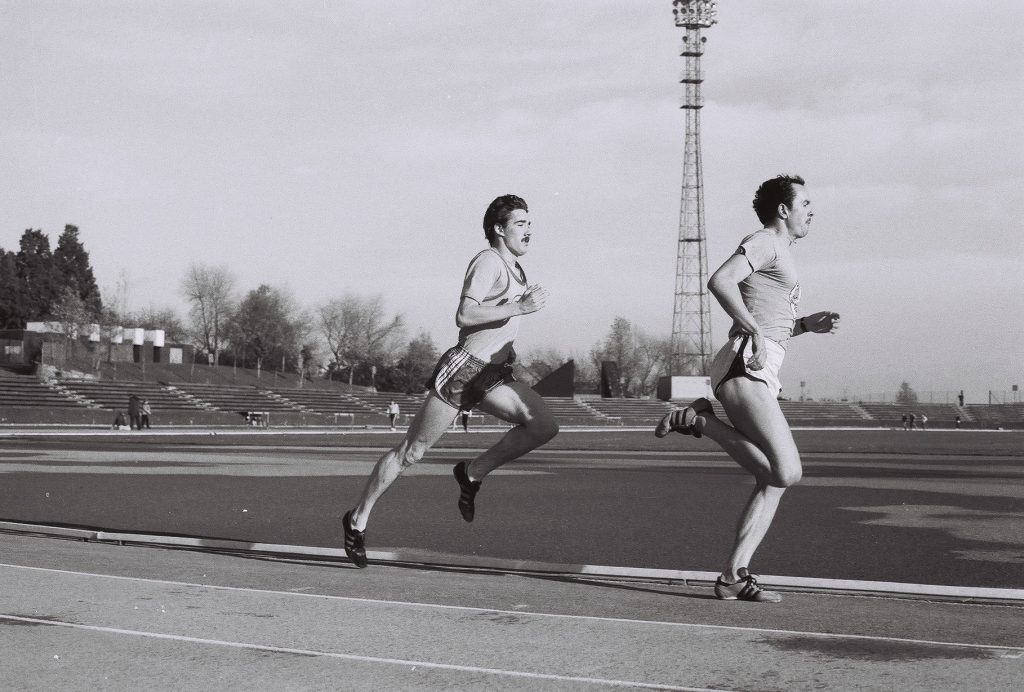 Adrian HORNE  Edinburgh University, Braidburn AC
Adrian won the 1956 East District Senior XC title and EU won team gold, as they had in 1955.
In the 1954 East District XC Relay, EU won, with a team including Adrian Jackson and Hunter Watson as well as Adrian Horne.
They also won the 1955 Junior National XC team title, with Adrian Jackson 2nd and Adrian Horne 9th.
He ran the 1954 E to G, when EU finished 4TH; and also took part in 1955 and 1956.

J HOUSTON Motherwell YMCA Harriers
In the 1988 Junior National XC, he finished 9th and his team won gold medals. In 1989 he was sixth and added team silver.

Harry HOWARD  Shettleston Harriers   See Full Profile
Harry became a Scottish International cross-country runner in 1946.    He won the Scottish Marathon title in 1950 by 13 seconds from Charlie Robertson (Dundee Hawkhill).    In the E TO G, Harry was in two 1949 winning teams (April and November); and won silver in 1950 and 1953.    In the Senior National XC, he contributed to team wins in 1948 (when he was fourteenth) and 1949, as well as team silver in 1953.

Alex contributed to several medal-winning Aberdeen teams. He ran the E to G every year between 1960 and 1965, including ‘most improved’ awards for 6th place in 1960 and bronze medals in 1963. In the Senior National, Alex helped his team to secure silver in 1964 and again in 1965.

Ray HUBBARD  Scottish Marathon Club, Ayr Seaforth
1990 Mar 2.30.21.
In April 1988, Raymond Hubbard ran three marathons in a weekend: Belfast (Saturday), London (Sunday) and then, after a long flight, Boston U.S.A. on Monday. He endured 78.7 blistering miles, and four plane flights, leaving three countries behind him. On Tuesday, he returned to work in Kilwinning!