See also:  The Baths Were The Winter HQ     What Was A Steamie?     Some Memories Of The Baths       Calder Street Baths 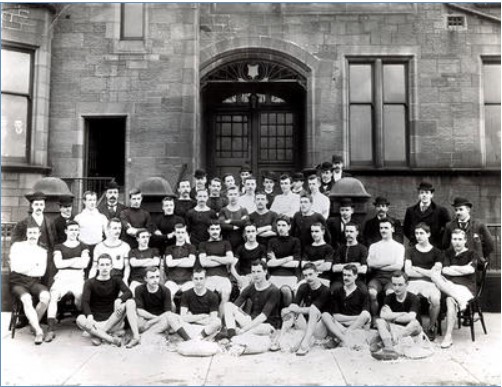 The importance of Burgh Swimming Baths to Scottish cross-country running and endurance running generally cannot be stressed too much.   Many clubs used the local Baths for their headquarters and trained from them on club nights (usually Tuesday and Thursday) all through the winter and often enough on Saturdays during the summer.  The attractions were many and obvious.   For instance the clubs did not have to buy the premises, nor did they have to rent them: they were run by the local authority and it was usually possible to simply book them at the start of the season with members paying their own entry fee when they came to train there.   They were also warm – lovely and warm during the winter months with hot pipes that ran around just below the ceiling from which the runners could hang their towels when they were out training and were warm for use after the showers.   That’s another thing – the Baths usually had communal showers where stories could be told, songs sung, banter engaged in and generally were quite a social occasion.  Towels could be hired too and left for washing afterwards.  There was often also a room, or rooms, where committee meetings could be held and the relationship between Baths staff and Harriers was always of the best.   For a few coppers more of course the swimming pool could be an added attraction after the run.      It could be confusing too at times when an area had several Baths, for instance Barrhead was reputed to have five public swimming baths which caused some confusion to visiting runners who became separated from the pack.

They were used right from the start by the various sections of Clydesdale Harriers.  The principal runs were held from the Victoria Baths and the Western Baths, the former being the grand opening run with all sections represented and the latter being the closing run with all sections present.  In 1989/90 runs were held from the above venues plus Dennistoun Baths from which the opening run had been held in 1887/88.  In 1888/89 the club handbook commented that the most popular runs were those held from the various Private Baths and Barracks.

The use of The Baths for training purposes was largely a West Coast phenomenon but it was not exclusively so.   Ian McKenzie says: “My recollections in Edinburgh go back to the early 1950’s when there was a combined clubs pack run from Portobello Baths before the start of the cross country season, always graded and with  “pace and whip” woe betide if you got in front of the pace you immediately got told by the whip to get back.    The first East District c/c league race was always organized by Teviotdale and changing was in the public baths, after showering you would jump into the pool to have a swim. Many East District races were also run from the Newcraighall Pit which meant there was an abundance of hot showers and baths to enjoy.”

And note the Fixtures from the Edinburgh Northern Harriers handbook of 1935-36, below,  which has a reference to what was probably the inter-club run Ian mentions above.

There is not much information about the Perth/Dundee areas as far as the swimming baths are concerned.   In the late 1920’s there were inter-club runs from the Perth Public Baths in the Dunkeld Road, led by Falkirk Victoria  Harriers and including Dundee Thistle Harriers but with eight clubs involved in 1927.

In Ayrshire, we know that the Garnock Baths were used on occasion as changing for the AHCA Relays in the 1950’s.

Much more recently, the newly formed Dundee Road Runners club used Lochee Baths in Dundee every Tuesday and Thursday and sometimes a Sunday from 1984 until around 1998 when they moved to Fitness First Gym in the Hilltown. 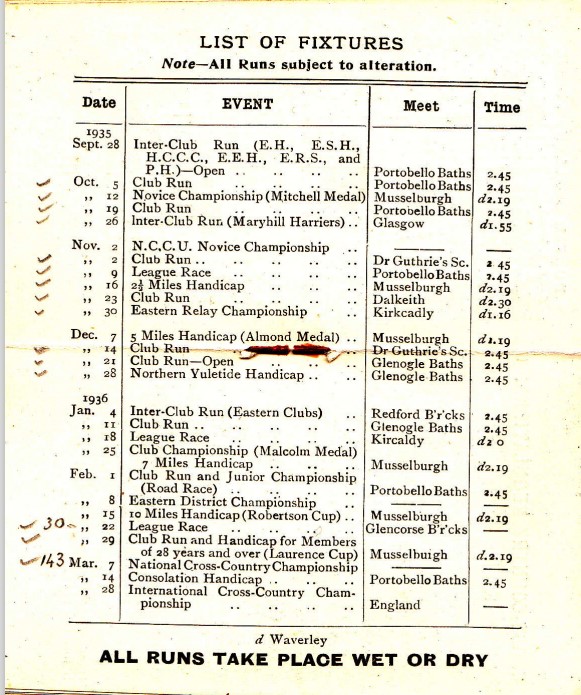 They could also be hired for local road races – for instance,

There are other examples of the use of the Baths for race HQ’s in the East District..    Alex Jackson points out that the East District League from 1924, started as four meetings in Edinburgh, two from Portobello Baths and two from Glenogle Baths which were near open country at that time. 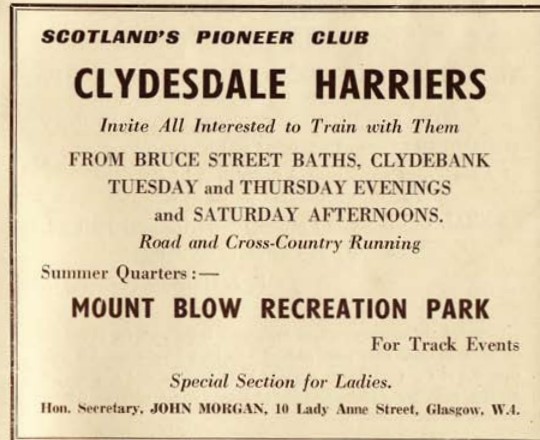 Douglas MacDonald tells us of the story after the Nigel Barge Road Race from Maryhill Baths:-

“I spent time in the side room compiling the results by hand, as each sheet was completed by the recorders at the finish, I would run up to the baths with it (50 names at a time I think?). It was a team race so we had to get the first 3 from each club and add up the points as well as match the numbers to times to names and post them on the wall before people were ready to leave. As an aside, there were also spot prizes at the Nigel Barge. The way it was worked was a runner who turned up every week but never got a prize was selected and it was 10 places up, and so on, until the spot prizes were finished.” 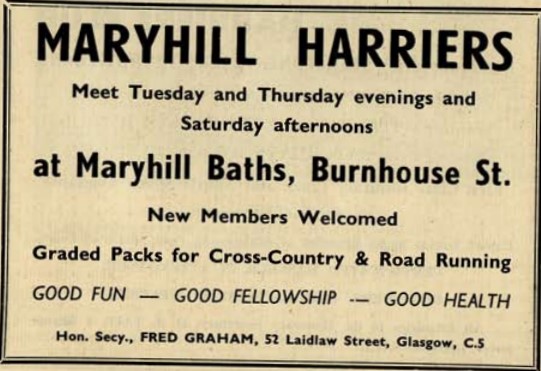 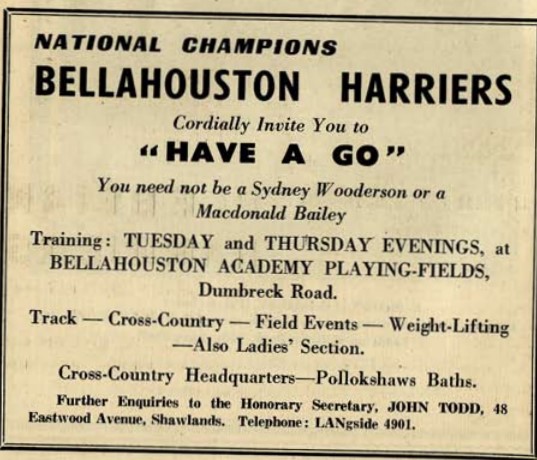 “Shettleston Harriers never used the Dennistoun Baths (Now a Snooker Hall) -There was a club which ran out of them – Dennistoun Harriers -one of the first clubs in Scotland . From my research they seemed very posh baths – Steam rooms ,Turkish baths and a gym for doing gymnastics etc. The short-lived ladies section of Shettleston h (1930’s) used Shettleston Baths but that was after the men would not allow them to use the clubhouse. The men’s club used an old fruit shop at first , then a school until they built the clubhouse in Gartocher Rd”.   And went on to say – “I know a lot of Harriers clubs in the early days used the Green Head Baths on Glasgow Green and I have seen lots of references to runs from there – Greenhead Harriers /Celtic Harriers /Plebeian H all used it at some time” 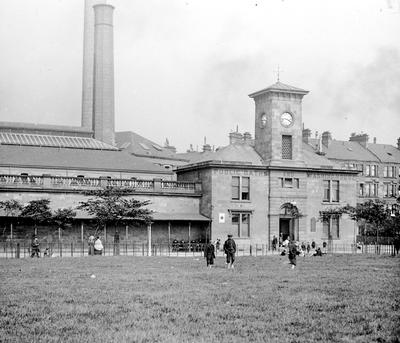 However despite almost all being individually architect designed, despite almost every one being a listed building, many were destroyed or transformed beyond recognition.   For instance, the Gartsherrie Baths in Coatbridge, home to Coatbridge Junior Harriers and to the Monkland Harriers prior to the construction of the Inveresk Pavilion were part of the Gartsherrie Institute & Baths  and was eventually demolished.   The photograph below, from Joe Small, is of the Institute immediately prior to being demolished. 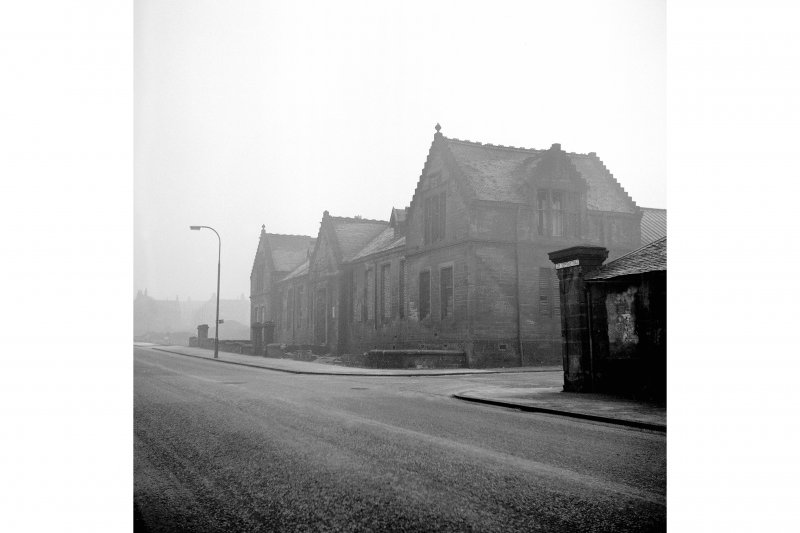