See Also:   The Baths    The Baths Were The Winter HQ   What Was A Steamie?   Calder Street Baths

This page is devoted to personal comments and reminiscences of runners who actuality used some of the facilities.

The start of the McAndrew Relay in 1950: HQ at Whiteinch Baths

All baths had their similarities as far as the basics were concerned – they were warm, they had copious supplies of hot water, they were always very close to public transport but there were differences too.   Most but not all were attached to Steamies,   eg the big ‘new Baths’ in Clydebank’s Bruce Street were not atached to any steamie.   Asked about Whiteinch Baths in Glasgow’s West End, Hugh Barrow was a fund of information.   He says:

“Unlike some establishments, there were no turnstiles at the entrance at Whiteinch.   Runners went up the steps and turned to the right, and then a left turn took you to the pool area, and a right to the steamie and washouse.   As far as the Harriers were concerned, pack runs assembled in the steamie where you could warm up by jogging round the machines in a central area that felt like a sauna and you had to dodge the guy who was hosing  down the area after a day’s washing .

The packs went out at set timed intervals, straight out the door down the steps into sub zero temperatures.   Woe betide any member of public who got in the way!   Runs were timed at the end, and always at the lamp post outside Whiteinch Library, then jog back round corner for a steep in tubs.”
Hugh reminisces and comments, “Simple in many ways but hugely enjoyable   Loved steeping in the tubs at Whiteinch after runs then walk along Medwyn St and 33 bus home.” 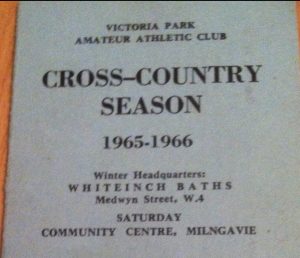 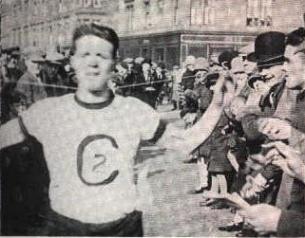 Jock Semple winning the Balloch to Clydebank 12 Miles in the 1920’s: HQ in Hall Street Baths at the time

I joined Clydesdale Harriers in 1957 and trained regularly every winter from then until I stopped running in the 1980’s and kept on turning up for committee meetings and as a coach right up until they were closed.   When you arrived in Bruce Street, the harriers just went in the main entrance where they paid their money (3d in old money in the 1950’s), went through the turnstiles and turned right and went down the stairs to the basement.   At the foot of the stairs, there were communal showers to the left behind a modesty curtain but the dressing rooms were along to the left.  About a dozen or so yards along the big dressing room – more like a hall – was on the right.   Warm stone floor warm walls too, as warm a changing room as anyone could wish for.   Hot pipes ran round the room just below the ceiling and many of the older hands hung their towels on there when they went for the run and they were superbly warm on their return.   If you hadn’t a towel, forgot to bring one or just couldn’t be bothered, then you could hire one for the session.  Harriers jogged round the room prior to their run, there were exercise mats there too and there was always someone doing a circuit of their own or just reclining more or less gracefully doing some stretching exercises.  There were a few weights for those who were that way inclined but it was mainly harriers of all shapes and ages.   The notice board was inside the door and that was where the results were posted on the Tuesday night.   The run for the evening was written by the captain and pinned inside the door with times for the various packs starting the run.   After the run it was into the showers for a blether and as often as not a sing song by the Harriers Choir – Pat Younger, Frank Kielty, David Bowman and all the rest singing mainly highland tramping songs.   Polismen were known to break their beat to chat to the women in the cash box to get warm and hear the harriers singing!

Johnny B Maclachlan, one of the best captains the club ever had, shares some of his memories of the Baths at Bruce Street.

The Entry was up a few steps to a turnstile. The woman, whichever one it was, seemed to know all the harriers and their requirements. Seeing my face she always rung up two tickets, a harrier and a towel, costing a tanner (6d), maybe more. Then downstairs and along a corridor, up a few steps to the changing area. On leaving there was a door on your right which took you to other accommodation, seldom used by us.   There were communal showers with 3 heads.   When the singing started I decided to leave, turning on the cold water leading to unprintable comments.  Near the changing area were a few lockers, one of which belonged the harriers. Sometimes a female attendant was at the lockers when some harriers wandered back from the showers in the nude. It happened to me on one occasion, totally embarrassing the said attendant. On the way out the towel was dumped in the chute prior to leaving the building. 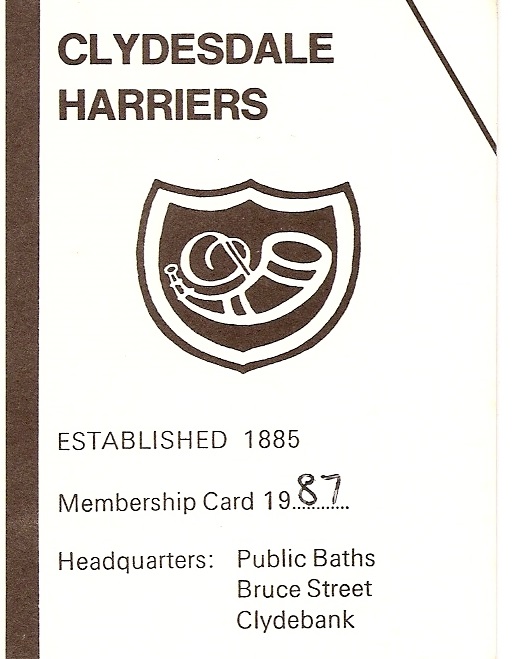 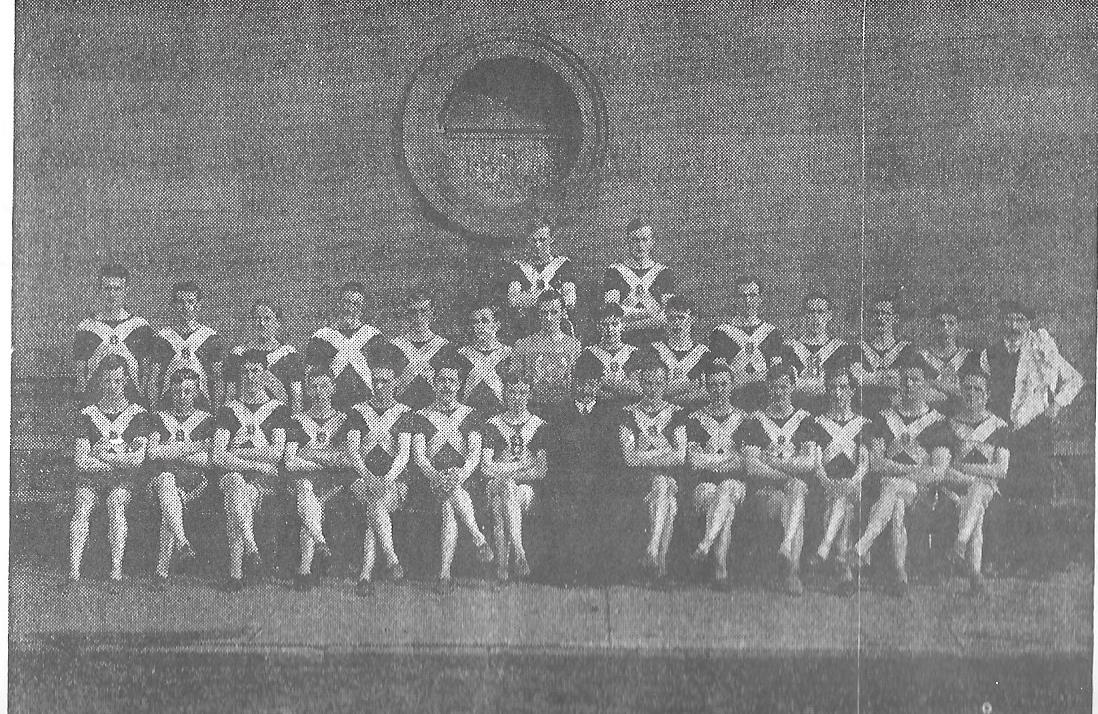 Jimmy Irvine tells us that
The harriers trained at Pollokshaws baths during the winter season (cross country ).   We went in and told the cash desk we were harriers, then they gave us a ticket so we did not pay anything .  We went in via the swimming pool down to the basement and paid I think about three pence, it was about 50 yards long  and at the end were the showers ( two showers ). On the wall were pegs to hang your clothes  and there was was a bench to sit on . It was quite good  – you could jog up and down as a wee warm up before you went out.  In a small room off the main area  Johnny Todd used to make tea.   You got tea and a biscuit  for a penny  (old money ) which went to club funds, sometimes we would slip out after the run and have a wee fly swim.  We would often train on a Sunday morning – we called that the “Sunday morning Habble ” In all I loved training at the baths.   Up a stair was the steamie. We used that sometimes when the basement was being used for something else .  Old Baldy Craig used to hose your legs down with a jet hose if you complained about sore legs. It really worked although;  sore at the time, real primitive stuff  from the old days.  The baths have now gone and replaced by flats, it was a real landmark which they took away – SAD . 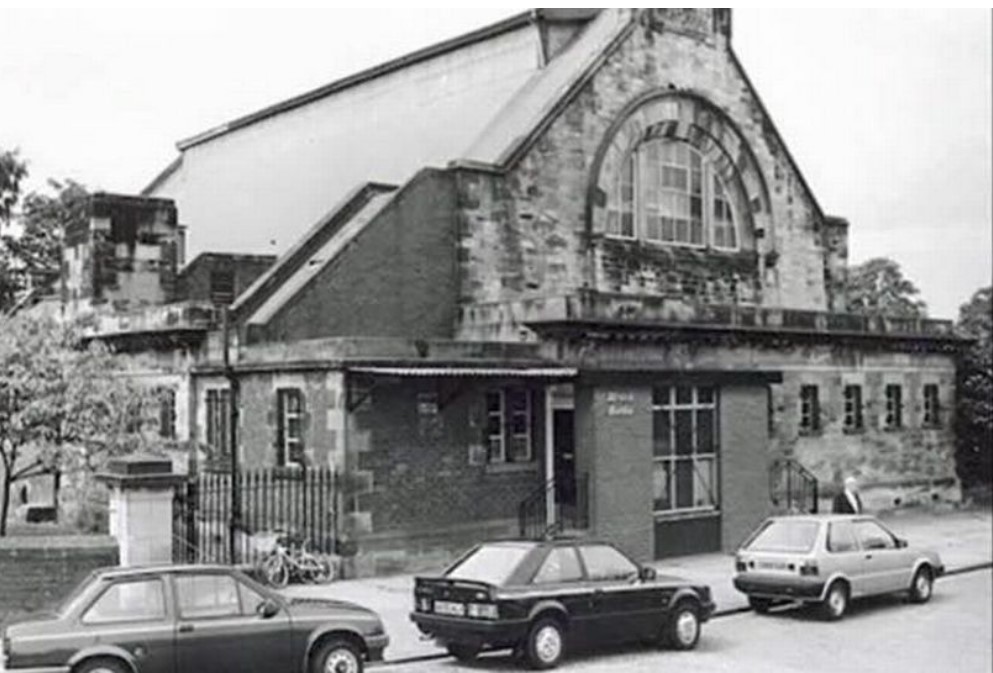 As far as I know the Brock Baths were always Dumbarton harriers meeting place for club training nights. The entrance fee was paid individually for entry to the baths not by club.    When I joined in 1956 , Dr.Ian MacPhail president, and Jimmy Walker secretary ,they trained from a small gym at the rear end of the pool which was 25 yards long with one diving board. There were single lockers along each side of  an open gallery above the changing rooms for spectators and changing. The club trained Tuesday  and Thursday nights and also Saturdays .We had a few lockers for the club and some rings hanging from the roof to mess about on .Entrance fee allowed club members to have a shower & swim after training (or a hot bath extra ).We were allowed to come and go through boiler room at the side of the gym.  The 2 mile road race started at the boilerhouse door, lap of common then mile & half round a few streets and back. Colin Martin still holds the record of 9m 18sec to this day.  We also held the county championship races round the golf course to Strathleven estate and back. 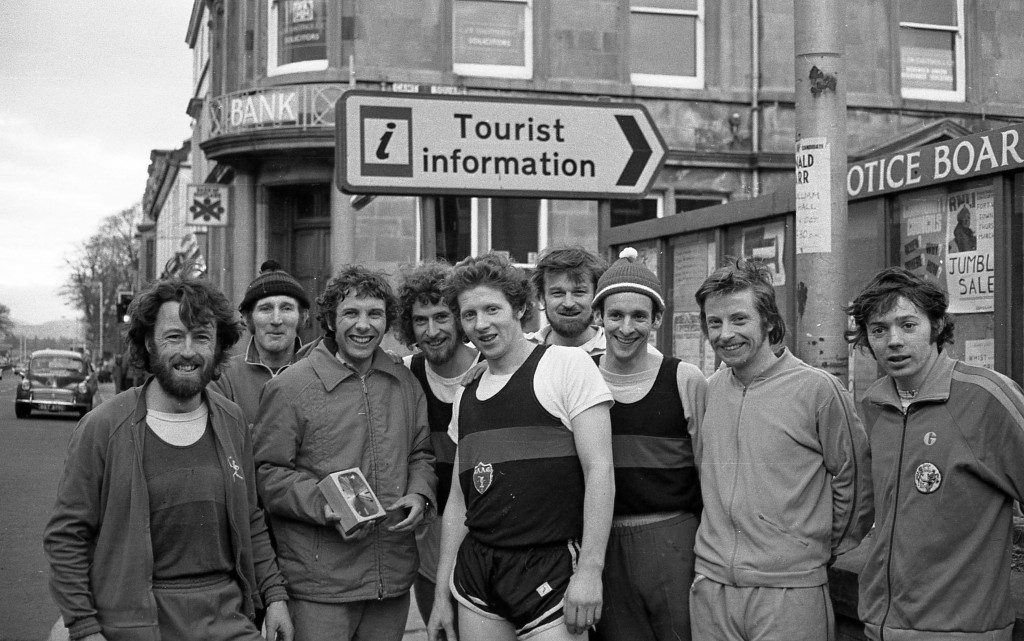 The Dumbarton team which had just finished the Glasgow to Fort William relay: Alistair Lawson on the left with Allan Adams second left.

Alistair Lawson taught at Keil School in Dumbarton and joined the club while he was there.   He says: I well recall the Brock Baths from 1966 – 1971  (duration of my stay in Dumbarton), though Colin Martin, Allan Adams  et al will recall the detail very much better than I can.  As well as DAAC visits on a Tuesday and Thursday evening, I took Keil pupils down there on a Friday evening for swimming training with the local club.  There was a smallish but adequate changing area, toilets adjacent and the use of the bathtubs.  I’m just trying to think whether we used the baths on Saturdays or whether it was only a weekday evening arrangement.   Saturdays might be either pack runs if there was a gap in the racing calendar, or the club’s own championship events.  I seem to think that the 2-mile and 6-mile events around the streets started from the Common, alongside the baths, but whether or not we used the baths on Saturdays I just can’t be sure, though I’m pretty certain we did on the occasion of the Dumbarton 800th Anniversary marathon in 1970. 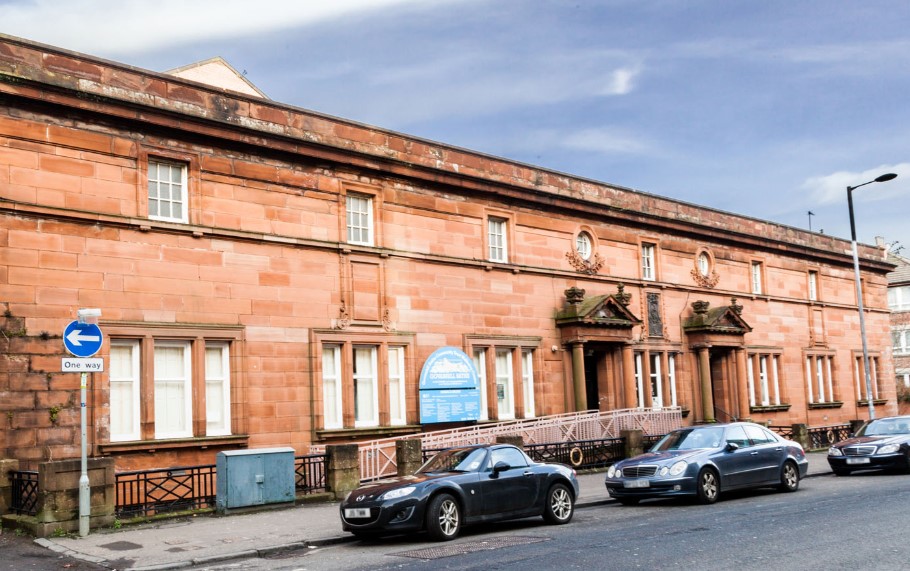 West of Scotland Harriers had been one of the very oldest harrier clubs in Scotland, dating from the 1880’s  When young Hamish Telfer joined the club, it trained at Stanalane track in summer and from Calder Street Baths (aka Govanhill Baths) and he looks back to the 1960’s.

WSH ran midweek from Calder Street Baths on Tuesdays and Thursdays plus Stanalane on Saturdays when not competing. My memory of Calder Street dates from about 1963 through to about 1968/9.   You went up the steps and the kiosk was in the middle. You paid only for a shower and then went left down stairs into the boiler room which had an area for changing at one end. It was always warm!   I can’t remember the location of the showers but think we went up to the slipper baths area for them.   My memory is of Johnny Todd massaging tired legs after a run and cups of tea and I think either rich tea biscuits or digestives for about a shilling.  I started selling tablet I made for club funds and actually became quite good at it (green-coloured  or strawberry/coconut). My dad taught me. We also had little fund-raising scheme, hatched in the basement.
This website uses cookies to ensure you get the best experience on our website.Learn More Got It