Calder Street Baths (which became Govanhill Baths) in Govanhill in Glasgow is an example of what happened to so many Baths buildings in Glasgow.   A well-loved facility, used by many local people for a variety of uses, undervalued by the City Council and scrapped or altered beyond recognition.   Or it would have been but for the people demonstrating, arguing and taking a stand that preserved the building and most of its functions. 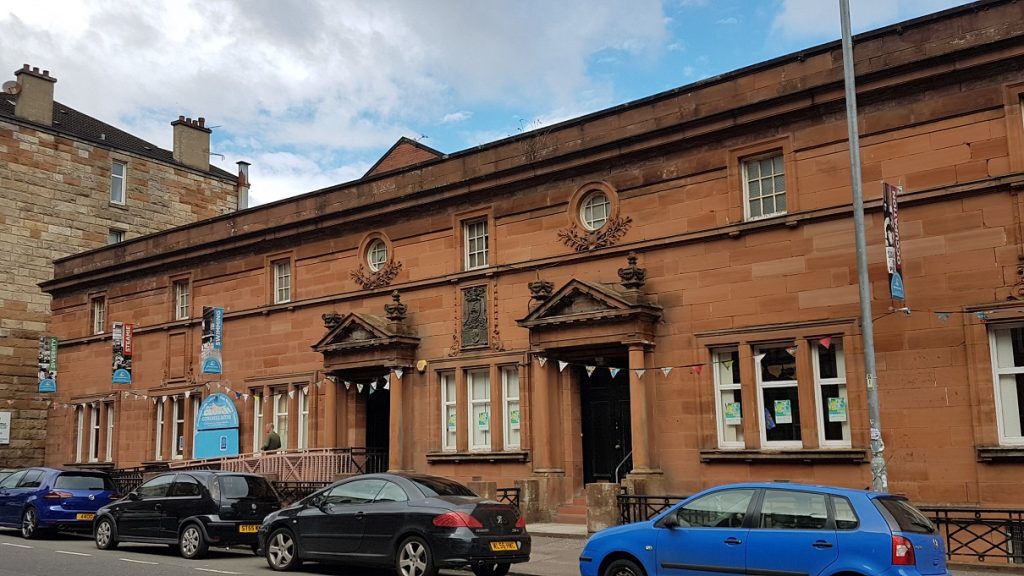 We can talk all day about the workmanship and planning but we need to really see what we mean by quality.   Remember that these were built for working men and their families who often, almost always in some districts, had no bath at all at home.    The Glasgow Historical Archive describes the beginnings of the movement, because that is what it was to start with.

1794 The North Parish Washing-Green Society was a charitable institution. The heritors of the North Quarter of the city provided and equipped a washing green, with wash-house and utensils, on the banks of the Clyde. The society received its seal of cause from the Town Council in 1794 and was managed by a board consisting of officers, representative citizens and elected members. Initially meeting in the ‘Penny’ North Parish School, the board received permission from the Provost to meet in the session house of the Cathedral in 1850. Those using the wash-house and green paid a fee dependent upon the amount and type of washing undertaken and these activities were overseen by a tacksman.

1869 May 24th At a meeting of the Police Board the following motion by Councillor William Wilson was approved; “That it be an instruction form this Board to the Sanitary Committee that they shall forthwith provide at four of the most suitable points in the City, Public Baths and Wash-houses for the accommodation of the inhabitants – all in terms of the Glasgow Police Act, 1866, clause 387.”

1875 February 8th Councillor William Wilson presented a motion to the Police Board that a Special Committee on Baths and Wash-houses be appointed.

1876 January Baths Committee and Police Board accepted an offer of the Town Council to lease them the site of the old washing-house on the Green for the erection thereon of Public Baths and Wash-houses, the rent to be £50 per annum. 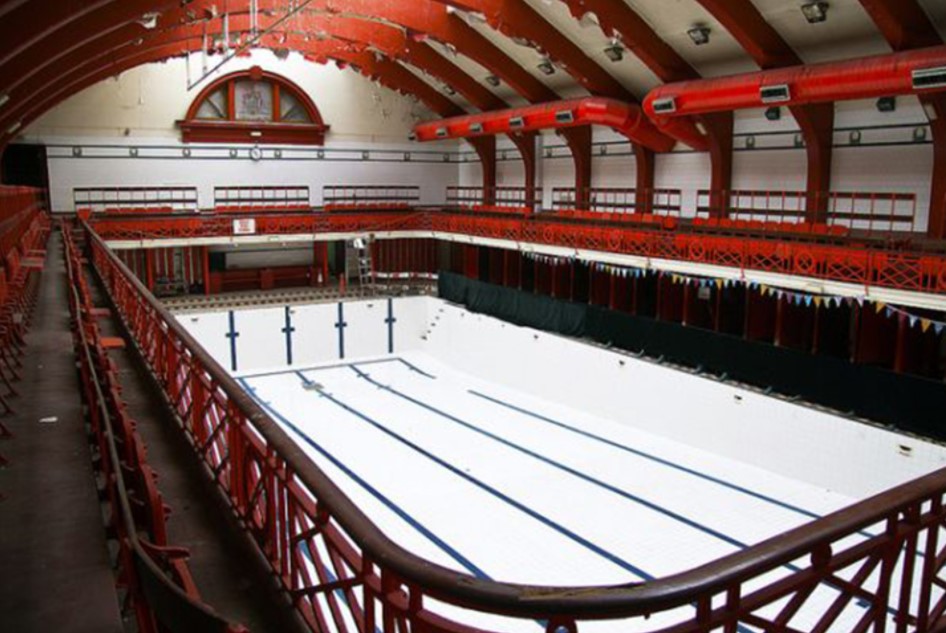 The pool in the photographs above and below is at Calder Street in Govanhill and the Public Baths there, used by West of Scotland Harriers until their demise.  Since then there has been a continuous campaign to have them re-opened.   The Historic Pools of Britain    lists the Baths saying:

Govanhill Baths is Glasgow’s last surviving Edwardian public bathhouse. The building originally contained public baths, a wash house, three swimming pools and a Turkish baths suite. The wash house, at the rear of the building, was converted to a laundrette in 1971.

They are described as:

Pictures tell part of the story but the descriptions of the exterior design, of the interior layout and building materials tells us a better story.   The fact that almost all the remaining Public Baths were Listed Buildings says a lot about the quality.   What tells us even more about the importance attached to the Baths is the number that were rebuilds – eg in Clydebank the Baths in Hall Street (called the ‘old Baths’ by the natives) became too small and so the Bruce Street Baths (the new baths) were built just one street further east and both were listed buildings.   Although the new baths were built at the start of the 1930’s the old baths were used by schools and other groups right up into the late 1960’s, possibly the 1970’s.   Other Baths in Glasgow were frequently rebuilt at some point because they were too small for the demand and the new version was also of high quality and became a listed building in its turn.   We can look at some of them.

For instance, the detail for the newer Whiteinch Baths says –

“Whiteinch Public Baths was constructed between 1923 and 1926 by the Office of Public Works and opened on 28 October 1926.   It was once a much larger complex that had two swimming pools, including additional baths for men and women, and a Turkish Bath.   The retained central pavilion of the baths makes a good contribution to the streetscape and is rare as a building type as not many 20th century baths now survive.   The original brick and Edwardian Baroque style represents a well-detailed example of civic architecture and it continues to make an important contribution to an area of the city which has been largely redeveloped.”

The building that it replaced – or rather was developed from – was described on its listing as follows.

“The Whiteinch Public Baths and Wash-house were built next to the public halls and the building contained a large swimming pond 75 feet by 35 feet 6 inches; a small pond of 40 feet by 20 feet; sixteen slipper baths for ladies and thirty-one for men; forty-three wash stalls; sixteen washing machines and (from 1926) a Turkish bath with room for twenty people. Sun lamps were installed in the 1930s.” 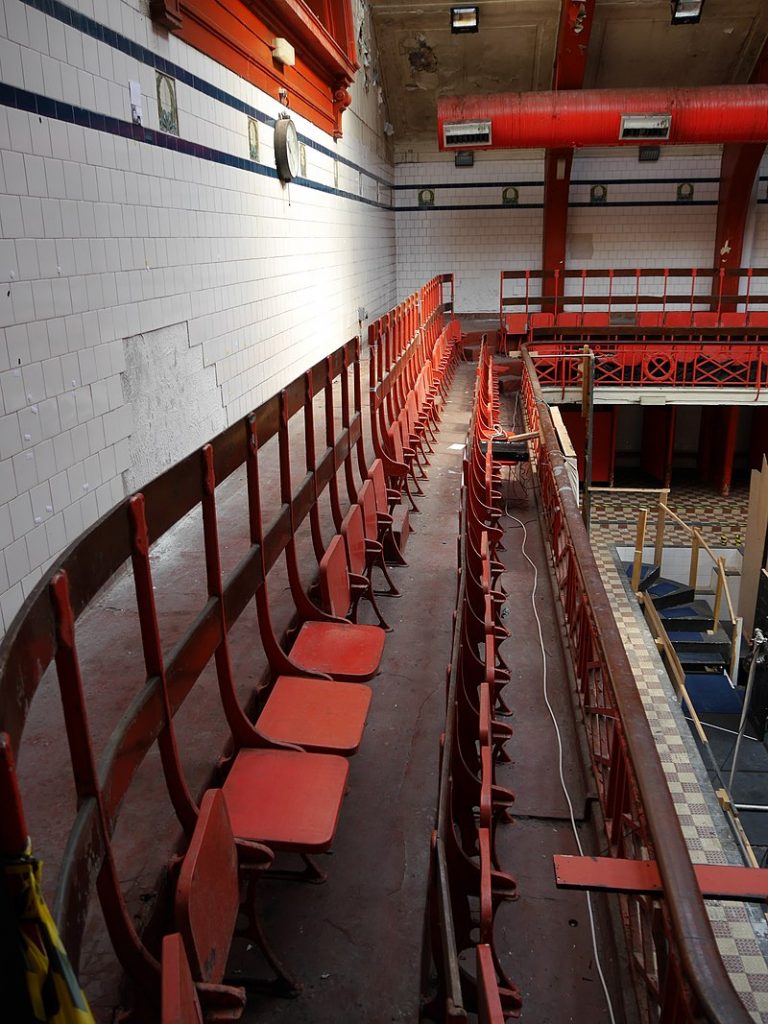 The Baths have in the 21st century been the focus of much local and national attention but before coming to that we should note the beginnings, as described by Wikipedia.

Govanhill Baths is Glasgow’s last surviving Edwardian public bathhouse.    The building contained hot baths in the upper storey and three swimming pools on the ground floor. There was a seating gallery around one of the pools for spectators attending events such as galas. The wash house, or “steamie”, at the rear of the building, was converted to a launderette in 1971.

The foundation stone for the new baths and wash-house was laid on 3 July 1914 by the Lord Provost of Glasgow, Sir Daniel Macaulay Stevenson.   An important function of the building in the early years was to provide clothes-washing facilities for local people whose tenement homes typically had no such facilities. Most homes in the area also lacked bathing facilities.    Local rumour has it that the baths were used as a temporary mortuary for casualties from bombing during World War II.

That it was recognised as a quality asset to the City, is indicated by the presence of the Lord Provost at the opening.   There were approximately 25 separate such buildings in Glasgow at the time, and not all were so honoured.   The people of Govanhill were justly proud of the facility which was well used by the local community.    However, the City Council seemed to have different standards and the closure of the baths was announced in the Glasgow Evening Times on 6 January 2001.    Glasgow City Council argued that the baths had too little use and were too expensive to refurbish and keep open.   The campaign to save the baths began almost straight away, and resulted in a community protest occupation of the building from 17 March until 7 August that year.   Sheriff’s officers accompanied by mounted police finally removed the protesters and shuttered the windows and doors with steel. A picket line remained outside the baths for the following year, supported by local community donations.

The Govanhill Baths Community Trust (GBCT) was formally constituted in 2005, and since then has been campaigning to reopen the baths as a “Wellbeing Centre”, supported by community trust initiative, external funding, and subscribing members. The trust manages community well-being projects and produces a newsletter.     Since its closure in 2001, Govanhill Baths has been the site of a variety of events meant to campaign for and promote awareness, including theatre and musical performances, art installations, and a skate-park. These events sped up action to reopen the pools, which began experiencing severe decay to the interior.

In 2012, the smallest of the three pools, the “teaching” pool, was reopened and locals were interviewed expressing relief and recounting long memories of the bath house. This step was financed by the National Theatre of Scotland for use in their production, Lifeguard. A three-step plan was made to transform the building with Turkish and sauna suites, an allotment, a community café and music venue. Some had to be turned away from the front doors when they arrived with towels and swimming gear as the initial refilling was a test of the pool’s integrity to confirm its viability for returning to use.

On March 22, 2021, building contractors took control of the site in order to commence refurbishment works. The scheduled works will ensure that the building is wind- and watertight, and will refurbish two of the three swimming pools. In addition, new facilities will be created including a gym, yoga studio, Turkish suite, community kitchen, archive, and learning space, all of which were chosen through community consultation.    The building is due to reopen in 2022.

The Wikipedia article can be found at  https://en.wikipedia.org/wiki/Govanhill_Baths