After the Games, the Team Managers, John Brown and Hilda Everett, were required to submit reports on the Games.   Both reports were much better than might have been forecast given the problems with money and the boycott that were faced.   They are reproduced below. 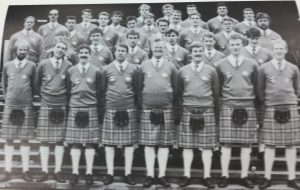 Scottish team performance is summarised below:

Travel:   All athletes assembled at the Games Village under their own arrangements and no difficulties were encountered.

Accommodation: In contrast to the previous Games held in Brisbane in 1982, the accommodation provided in the Edinburgh University Pollock Halls of Residence was ideal.   Team members shared, two per room, but with the athletes being allowed to determine their own extent of residence in the Village, and by making appropriate pairings, many enjoyed almost single room accommodation and this was very much appreciated by the athletes.

Training Facilities: The training faciities provided by the Organisers were found to be adequate for our requirements.

Medical Support: The mdical team of doctors and physiotherapists can only be described as superb.   They were always on hand to provide expert care and atention in a very warm-hearted way, and on behalf of the athletes I would like to pay them a special tribute.   Of the many athletes who consulted the Medical Team only Lindsay Robertson (marathon) was unable to compete.

Discipline: No member of the team required to be spoken to regarding discipline or behaviour in general, and all supported the various functions and meetings with Royalty.

Boycott: It was most unfortunate that the Games suffered from the boycott with a third of the competitors being excluded.   In athletics very few potential medallists did not take part.   The depleted fields however meant that a number of our athletes who would have benefited from an earlier round, were being thrown into semi-finals or finals of events.   A number were unfortunate not to qualify for further rounds by the narrowest of margins.