Veteran, Master, Harrier, Athlete, a rose by any other name is just as sweet, an tae tell the truth a hae been/am the hale jing bang show, an a wis a late entrant tae the runnin’ scene! Came in via the marathon boom via the Fa’kirk Vics an wi’ the late Jimmy Kelly, The Scoattish Vets. We lined up wi’ the elite, Jimmy sayin’ we are the elite.

I am a road runner, a’ else is a bonus, I enjoy the challenge of the road, the camaraderie of the packed dressing rooms, before and after the race.

The track I came to, in some measure to get out of the slipstream of Willie Marshall. I had done the miles had the strength, the stamina, so why no the track? It wis a breeze – a’ a had tae dae wis suss oot the field, hing in ahint taking the pace, an then belt it fur the tape, an a’ did no too bad at that, even at British level.

The X/C, noo that is a different story, it wis a’ hard work an a wis at the tail end, aye even wi’ the lassies, bit yin event at Cupar in 2004 lives wi’ me; demanding course, the weather inclement in the extreme, runners packin a’ o’er the place. Jean worried tae hell aboot me, whar wis a, hoo wis ’ getting oan? She wis reassured I was being monitored personally through the hale course, tremendous.

The Rt. Hon Dennis Canavan, a title richly deserved, is a quality road runner, records better times than I, agreed wi ma disquiets; unsuccessful in remedy, bit then he had a helluva load oan his plate.

Our government sought tae house the Tour de France. a’ve written ma MSP tellin him that, if they’re so minded, then let’s resuscitate the Edinburgh to Glasgow Road Relay! Noo jist let a’ youse yins dae the same, an dae we nae hae professionals whom we pay tae dae the same?

The Scottish Athlete of the year is undoubtedly Fiona Matheson.

Finally, The Scoattish Vets his enriched oor lives in so many ways. We are hingin in, hence the letter an’ thanks again. Hugh McGinlay Falkirk Victoria, Scottish Veteran Harriers  Newsletter, April 2013 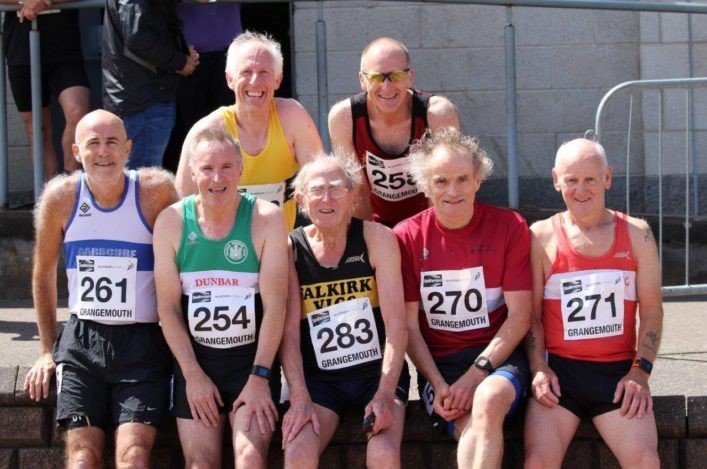 “Hugh never ceases to amaze me with his positive attitude to life and what he is able to achieve despite his age (94). He is kind, thoughtful and has a heart of gold.

When I phoned him today (October 2020) he was busy doing his daily exercises, as his running has been curtailed slightly, due to plantar fasciitis but he was still managing to get a fair bit of walking in. Hugh is eagerly preparing and hopeful of competing in a track indoor season next year followed by a summer track season. When his plantar fasciitis eases, he has a great wee route near to where he lives that he has mapped out for his efforts.

Hugh mentioned that he is managing to sleep well which is a huge benefit and the secret to that, apart from his active life-style. is a hot toddy before bed!

I am not sure how much people know about how Hugh got interested and involved in sport, so here is a little bit of background.

Hugh enjoyed physical education as a boy from football to rowing, and most of his career seems to be based around looking to source or improve facilities that were or were not available over the years, in a variety of different disciplines from badminton, tennis, squash, canoeing, hockey etc in the local and surrounding areas.

He was a founder of the local Sports Council and one of the projects he was involved in was introducing long distance canoeing on the canal from Glasgow to Edinburgh.

Hugh started running in 1982 when he ran the Glasgow Marathon for charity. However he had hurt his leg, prior to running, while playing squash but, because he was running for charity and people had pledged money, he decided to run and managed a time of 4 hr 5 mins and 30 secs Hugh recalls. He wonders to this day what time he might have run without a sore leg!

Hugh sounded in great form today and seemed quite upbeat: he is a colourful character with so much positivity it’s refreshing!”

JANETTE STEVENSON, another World Masters Champion (and Falkirk club-mate), remembered: I got involved in running in 1984. There was an initiative between Woman’s Own Magazine and Nike the sportswear company to get women into running.  It was rolled out countrywide in sports centres and was augmented by a weekly training programme in the magazine. It started in April 1984 and the objective was to run a 10K in September.

So I turned up at Grangemouth Sports Complex along with about 20 or so other ladies all keen to be trained.  It was raining of course and we thought

They would let us run round the gym – nice and dry. But the coach I always remember this, said, “If you don’t run in the rain in this country – you don’t run!”, and he opened the doors and shoved us out to run half a mile round the park.  The training was twice weekly and one of the coaches was veteran runner Hugh McGinlay.  Most of us managed to run the 10K and I think my time was 54.09.  After the race, Ian Cluggie  a coach at Falkirk Victoria asked us if we would be interested in jogging with the club so I started training and the rest is history.

I was 56 when I first ran the Glasgow Marathon in 1982. I had been playing squash and had an injury and shouldn’t have run, but I did it anyway. I completed it in four hours and five minutes. I thought: ‘I did that with a bad leg. I’ll try it again.’ The next one I did in three-and-a-half hours.

And I just kept going. Why running? It’s simple. I just put my gutties on, go out the door and run wherever I want to. I have done marathons, half marathons and 10k races.

I have always been competitive. If I go out the door, I have a stopwatch in my hand. I like setting myself different challenges. Running the long, straight canal in Falkirk where I live is boring; I prefer a course with hills and bends.

I’m a full-time carer for my wife Jean, but I go running any chance I get. She has always supported me, and I couldn’t have run without her. When I was misdiagnosed with epilepsy, for three years she drove me all over the country so that I could compete.

Sport is my life. The volunteers – the marshals, timekeepers, people handing out drinks – are all wonderful. I hope to be competing at the FPSG Scottish National Masters Track and Field Championships in Grangemouth next weekend in the 90+ age group over 400m, 800m and 1500m.

(During his long, very active life, Hugh has also been a canoe instructor, mountain leader, hockey player and an expert rifle shooter. Throughout Scotland, he cycled on a tandem with his wife Jean and they climbed many hills together. At the Glasgow Marathon, he won two McRobert Thistle trophies. In addition, for fifteen years he was a Sports Officer with Falkirk Council.)

Hugh McGinlay knew well and was a fervent admirer of even older Scottish Veteran Harrier greats like John Emmet Farrell, Gordon Porteous and David Morrison. Now his achievements can be added to the feats of these stars.