Unlike football, cricket and rugby the Harriers did not own their own grounds but used public facilities where possible.  The first two open athletic clubs in Scotland had their opening runs from hotels: Edinburgh AC from the Harp in Corstorphine in September 1885 and Clydesdale Harriers from the Black Bull in Milngavie in October 1885.

Indeed, they were known to turn down the opportunity to lay their own track or build their own stripping accommodation on occasion.   Note the following from the Clydesdale Harriers annual handbook for 1888/89:   Grounds with Cinder track have repeatedly been spoken of but so longs as the present friendly relations are maintained with Rangers FC, the Committee consider that there is no necessity for moving in this matter.”   The questions then became where shall we go to do our training, organise races and hold social evenings such as prize givings and money raising entertainments?   Training, particularly in the West of the country, as often done twice or three times a week from local Public Baths where there was ample stripping space and hot showers, baths and swimming baths.   Also used were Colliery Pit Baths for the same reasons – they usually had ready access to open country too for the winter season, at times Army Barracks were used but, almost as often as Public Baths, HQ for Harriers clubs was the local pub, inn or hostelry.   They were used as club headquarters with committee meetings being held therefrom, they acted as race facilities with stripping accommodation, entries being taken and often as the presentation venue after the race.

The pub, hotel or hostelry as a training venue was distinct from the premises being used for social purposes although no doubt some informal fraternising did take place due to the nature of the establishment and the gregarious nature of the harriers.   The Clydesdale Harriers annual handbook for 1890/91 had the following:   “Club rooms were engaged last season and were the means of bringing together a great number of members.   The Committee have again secured these rooms at 33 Dundas Street; it is hoped that members will take due advantage of them,   The rooms are open daily from 10 am to 10.30 pm with the exception of Mondays when they will be closed at 7:30 pm”   The rooms had many of the daily newspapers and sports journals, served food and refreshments and were used for prize-givings, presentations to members and so on.   One member of the West Of Scotland Harriers wrote a letter on club premises which you can read  here.   This is distinct from the use of the pubs for training or racing.

What follows is a a note of premises used by the various clubs indicating how widespread the practice was and how many were used by some clubs.

The picture above is of the Black Bull in Milngavie, East Dunbartonshire from which Clydesdale Harriers had their first ever cross-country run in October 1885.   One month earlier Edinburgh Harriers had their first run from The Harp in Corstorphine.   Scotland’s two first cross-country runs by organised, dedicated athletic clubs were held from Hotels.   Subsequently hotels, inns and humble pubs were to play a part in the development of the sport in Scotland.

Athletics historian Hamish Telfer has come up with most of the following list of such venues and the clubs that used them.

The photograph below of Edinburgh Southern Harriers at the Sheep Heid Inn at Duddingston and was published in the ‘Scots Athlete’ article on the club’s history; the club also used the Barnton Hotel in the west of the city. 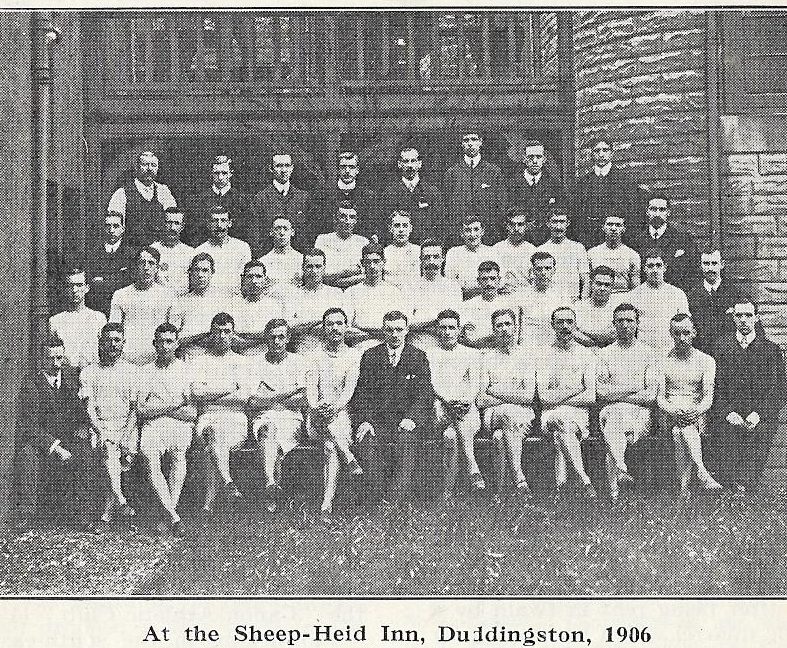 The photograph above of Edinburgh Southern Harriers at the Sheep Heid Inn at Duddingston was published in the ‘Scots Athlete’ article on the club’s history; the club also used the Barnton Hotel, below, in the west of the city which was a landmark on the first stage of the Edinburgh – Glasgow relay.

The work done by Hamish Telfer in gathering many, if not most, of the watering holes above has to be acknowledged and due thanks given.