The 1930 British Empire Games were the inaugural edition of what now is known as the Commonwealth Games, and were held in Hamilton, Ontario, Canada from 16 to 23 August 1930.   The games were organized by “Hamilton Spectator” sportswriter Bobby Robinson after he attended the 1928 Summer Olympics in Amsterdam as manager of the Canadian track and field team and was inspired to create a similar event for the British Empire. After campaigning for the idea among contacts he met at the Olympics, he was asked to organise the first British Empire Games in Hamilton.   The genesis, according to the ‘Torontoist (The British Empire Games of 1930 (torontoist.com) was as follows:

“Melville Marks “Bobby” Robinson was pissed off. As manager of the Canadian track team during the 1928 Summer Olympics at Amsterdam, Robinson noticed the lack of respect given to Canada despite winning 15 medals, especially by the Americans. Disputed results, favouritism shown toward the Yankees in using training facilities, and a direct insult to a Canadian official by future International Olympic Committee president Avery Brundage signalled a lack of comradery and sportsmanship Robinson felt was creeping into the Olympic movement.    He was so angry that he contemplated pulling the Canadian contingent out of the 1932 games in Los Angeles.

That anger played its part in bringing the first major international multi-sport competition to the Golden Horseshoe, 85 years before this year’s Pan Am Games.

While in Amsterdam, Robinson chatted up a recurring idea in his mind—a cordial, relaxed athletic competition for the best athletes in the British Empire. It wasn’t a new concept; talk of such games arose during the 1890s, when J. Astley Cooper wrote several pieces proposing athletics be included in an annual festival designed to boost goodwill across the empire. Four teams, including Canada, had participated in a meet in 1911 to mark the coronation of King George V. During the 1920s, the Amateur Athletic Union of Canada (AAUC) passed a proposal to support an empire competition to be held in between Olympic Games.”

Follow the link and read the entire article, it is well worth reading. 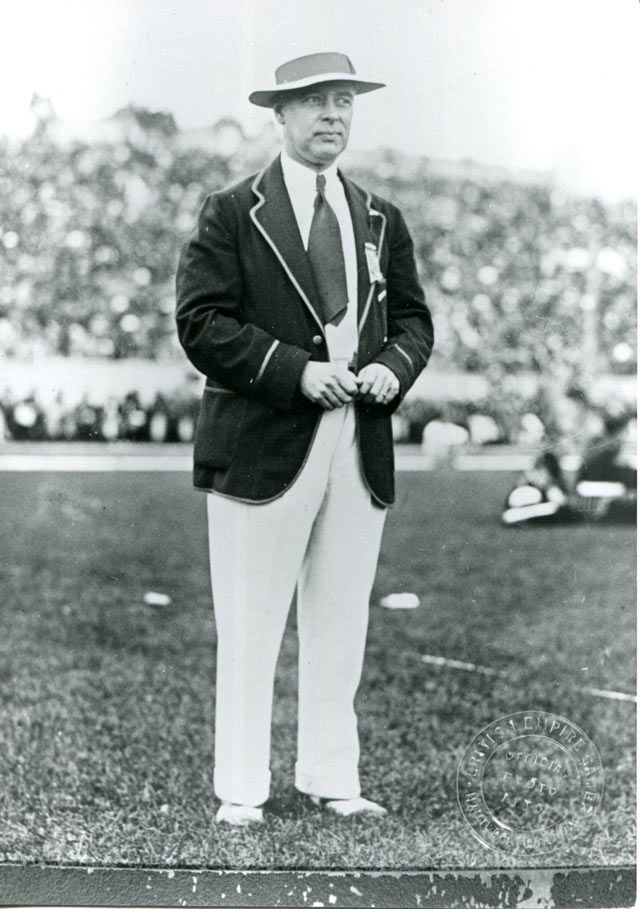 The events were to include athletics, boxing, lawn bowls, rowing, swimming, and wrestling. Women competed only in aquatic events. The opening ceremonies and many events were held at Civic Stadium (later renamed Ivor Wynne Stadium) in east Hamilton.   The Scotsman of 15th March, 1930 contained the following short paragraph. 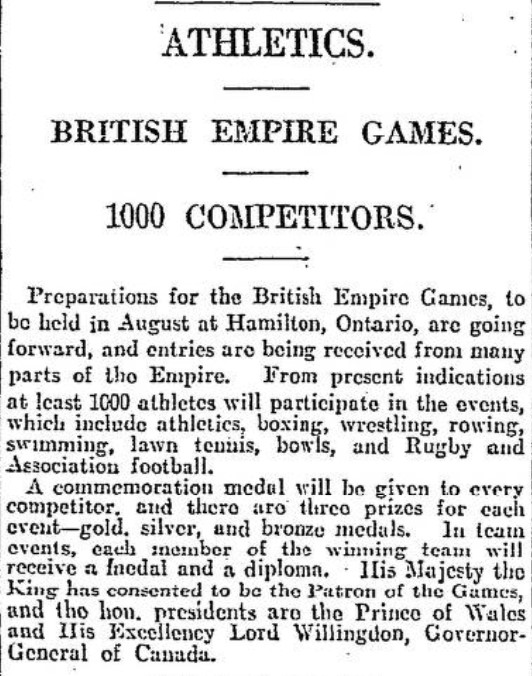 There were similar items over the days and weeks from the other sports to be included.   eg at the ASA AGM that same month, the following was reported in ‘The Courier’. 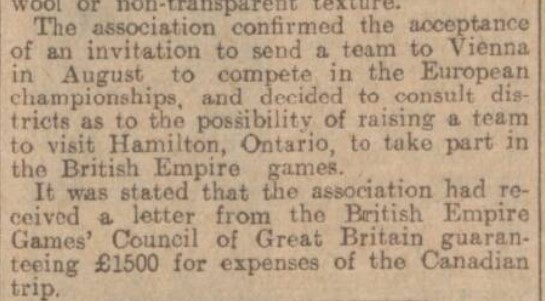 Money was the item that seemed to raise most concern for the various bodies – ir seemed to go without saying that all sports invited were keen to send a team.   When the team left the Scotsman of 4th August had a report and a picture to cover the event. 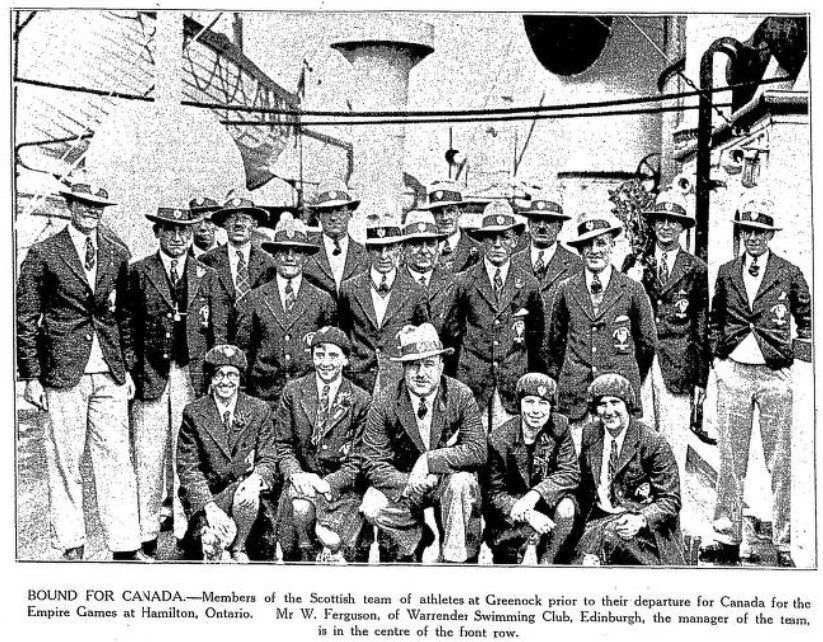 When the Games started on 16th  August, the statistics tell us that there were Six Sports as listed above, and eleven countries as noted below.

Scotland’s team came away at the end of the Games with 2 gold medals, 3 silver and 5 bronze. – but only one (Dunky) won an athletics medal    The Scotsman of 22nd August reported on the previous day’s sport in this column.

Scottish competitors in the athletics events were as follows: 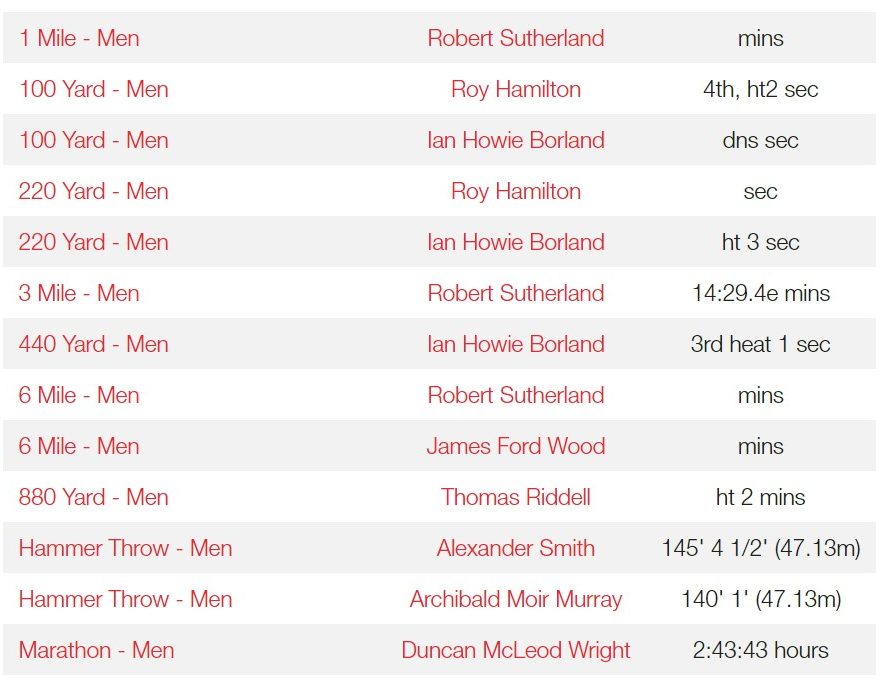 That the Games were a success was never in doubt.   eg on 21st August it was clear that the Games had been a success and the “Dundee Courier” carried the following short notice. 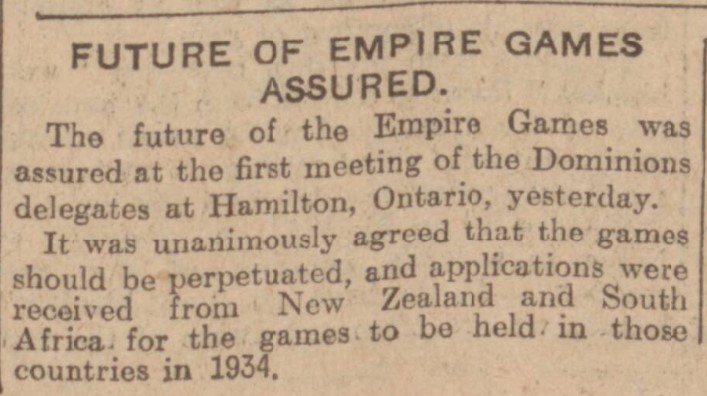 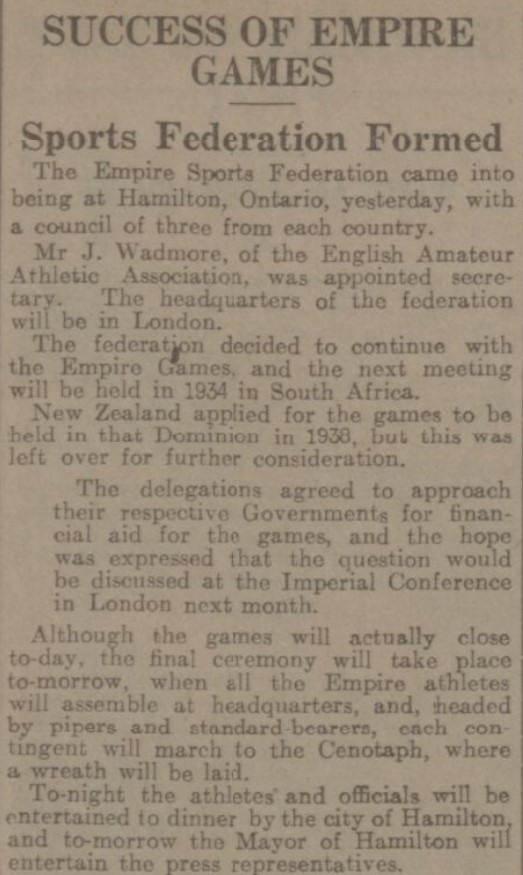 The Games were also important for other things in addition to the sports.   Note the use of a podium: “Podiums were first used at the 1930 British Empire Games (now Commonwealth Games) in Hamilton, Ontario and subsequently during the 1932 Winter Olympics in Lake Placid and the 1932 Summer Olympics in Los Angeles.” (Detail from Wikipedia).   First used in the British Empire Games then copied by the Olympics.   The podium will celebrate its 100th birthday in 2030!