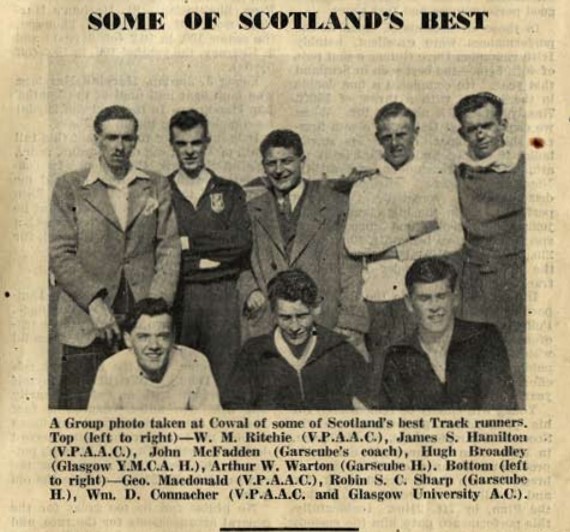 After the 1939/45 War the clubs started up but clothing coupons for athletics gear was in short supply, facilities were in most cases non-existent and clubs, after six years of war, had in many instances small numbers of enthusiasts.   One thing that was needed despite these drawbacks was informed or experienced athletes or coaches.   Those clubs that had coaches advertised them in the new “Scots Athlete” magazine which had a page or so with small club notices.   The importance of coaches was recognised and all clubs were desperate for their own.   eg In Volume 1, issue number 2 of the magazine there appeared this:   “If a member of Edinburgh Harriers passes you with a terrific burst down the home straight you will know the reason.   Dick Littlejohn, the former SAAA half mile champion has retired competitively but is coaching his clubmates.”

There were several similar items but what they had in common was a lack  – a lack of what could be defined as a coach!   In June 1946 in  issue number 3, Shettleston Harriers offered this:   “Endeavouring to foster field events, the able coach David Morrison is co-operating with Archie Dudgeon, champion heavyweight wrestler and Empire Games representative, on instruction in physical culture in order to build up the necessary physical condition for field events.”    Further down the same column Victoria Park AAC said:  “… coaching from G Munro, WS Paterson and ex-heavyweight AC Nicolson.”   Nicolson had won several SAAA Championships in the 1920’s as a shot putter and as a Hammer Thrower (Scots Style).   Garscube Harriers notice pointed out that “Coaches John McFadden and Sam Small were very well known athletes in their day.”   They all wanted coaches who could help build their clubs.  Former athletes often filled the bill, weight lifters were often recruited to help field eventers build their condition.

Then in January 1947 the following appeared in Emmet Farrell’s  “Running Commentary” column. 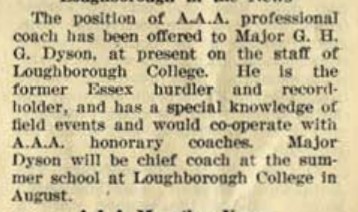 In March 1947, TM Anderson had a two page article called  “Learn to Analyse” emphasising the need to develop technical efficiency in competitive events and outlining the aims of the Coaching Association.   The Association had not been mentioned before this and it is not clear from the article whether it existed in a practical form but it was another example of the known need for technical input to the development of athletics if the country were to succeed in the sport.   The SAAA realised the importance of coaching to the sport and it was discussed at meetings – eg  in May 1947 an Olympic Games Coaching Committee was set up under the chairmanship of ER Walker (Shettleston Harriers) with Dunky Wright (Scottish Marathon Club) as Secretary.   A scheme setting up of coaching panels in each of the main areas of Scotland was submitted and approved.

At club level, Allan Scally was coaching at Shettleston and several very good athletes emerged from his stable, runners such as Allan Watt.   Unusually for the time, there was co-operation between coaches as far as Watt was concerned. We are told that he worked on his style over the winter with Tom Anderson on the theoretical side and Allan Scally on the practical side.    Garscube Harriers were advertising that they had a Trainer and Masseur in Bob Scott as well as coaches Johnny Cuthbert and Johnny McFadden who had “practical and successful experience of American, Canadian and Scottish athletics.”   It was however down to the individual clubs as far as organising coaching was concerned.

The SAAA Notes for July contained the following: 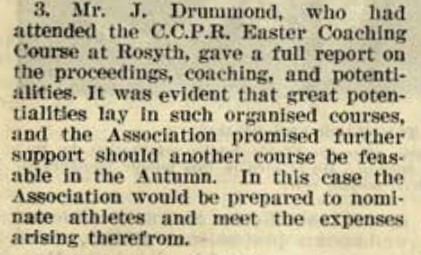 The SAAA was indeed getting seriously involved in coaching.   Having organised a coaching course and minuting its benefits so enthusiastically, it would be a matter of time before they had a programme of their own up and running.   Clubs were spending money helping their athletes, and the same issue of the “Scots Athlete” reported that Rangers FC had donated “£250 to the Olympic Coaching Fund.  At the end of August, Roy M Smith had attended a new venture being held at Loughborough.   Smith was SAAA Long Jump champion and was a lecturer in PE at Aberdeen Emergency Physical Training college.   His report starts as follows: 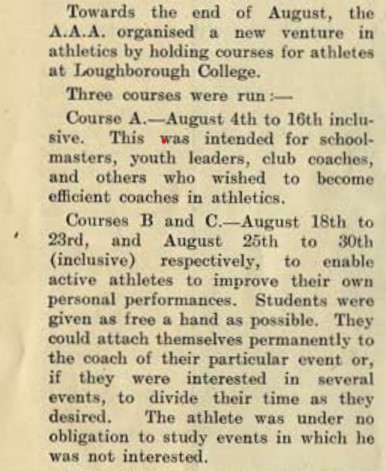 The complete article can be read in the magazine at     SA Vol 2,7-8.pdf (salroadrunningandcrosscountrymedalists.co.uk)

On 15th October , 1947, at their monthly meeting, the SAAA Notes included the following:

“Mr D McL Wright set out the Coaching Scheme now in operation in the Western District, and referred to the arrangements being made for a similar scheme to be set in operation in the East.   In view of the limits imposed by the relatively small response to the Appeal Fund, the appointment of a full time coach was considered to be not feasible, but the Secretary was empowered to make tentative enquiries for obtaining the services of Mr Dyson, the AAA Official Coach,  for a short period during the winter.”

A full time coach had been mooted, discussed and steps had been taken towards funding the post.   Meanwhile, Emmet Farrell commented in December 1947 on training being provided for Olympic possibles at Ibrox Park under the training of coaches “Messrs Cromar, Hodge, McFadden, Bone, Paterson (senior) and Georg Kordas, the Hungarian heavy events expert while, at Helenvale Park, we have marathon and cross-country  enthusiasts training steadily under the watchful supervision of Messrs Scally and Craig.”

Work towards developing a national coaching system continued and then the information that everyone had been hoping for, for some time, appeared in the Press on 15th December 1948:

How had it finally come about?   The SAAA had approached the Scottish Education Department for the setting up of a National Coaching Scheme and a National Coach.   The aim was to provide clubs, schools and youth organisations with a facility that would have a national coach for athletics and that all athletes in the country would have access to a national panel of specialist coaches. 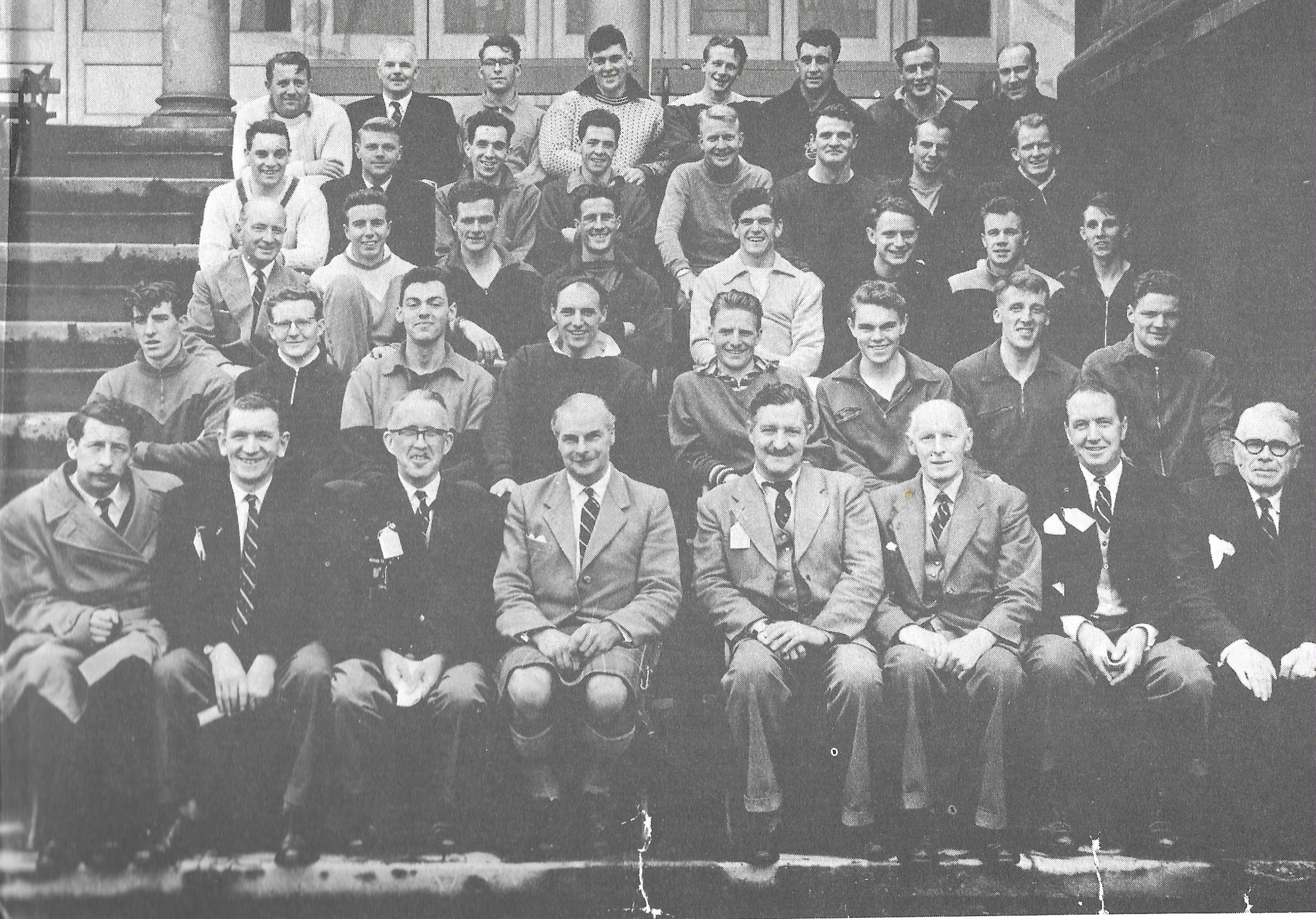 Scottish Team, Officials and coaches before match v Ireland, 1957.   Tony Chapman is on the left in the back row.

In fact Scotland was a bit behind the curve in the appointment of coaches.   We should look at the context of coaching in Britain if we want to understand the progress of our own coaching over the next two or three decades.   We should maybe go as far back as the inter-war years when the CCPR was set up in the 1930s as a body set up to co-ordinate recreation and the ever more popular sporting landscape in Britain. However, the hiatus of the 1939-1945 war took over. By now training and analysis of athletics was taking hold and the Loughborough Summer Schools at Loughborough had been set up through FAM Webster who was an extremely influential figure within the AAAs set up. Even at this distance, if anyone is interested in the development of athletics coaching, it is a book worth seeking out.    However after 1945 the influence of Webster was clear and evident and with the awarding of the Games to London in 1948, the appointment of an overall presence regarding preparation was made and this was the dynamic Geoff Dyson. Dyson’s impact was incredibly influential and although mainly in England, the ripples were felt quite literally world wide. It was at this time that Britain started to emerge as a world leader in coach education, coach leadership and coaching structures as well as analysis of events to the extent that we conducted courses overseas for other national governing bodies.

Dyson soon set up a network of coaches from the more senior ranks of coaches with the AAAs. This led to appointments eventually of the likes of John Le Masurier, Dennis Watts and Jim Alford and others in the 1950’s.   it is not clear who were appointed in the period 1946-1960  In amongst this however was the appointment of Tony Chapman in Scotland to coordinate the coaching structure and offer leadership. His role was essentially administrative working with both the SAAAs and the SWAAAs and their respective (and sometimes conflicting) demands. He did set up committees however and this was in place by the time he ‘retired’ in 1961. By now Scotland had a number of high level officials and coaches such as Tom Williamson, Jimmy Campbell, George Sinclair and the embryonic (back then) Bill Walker.
We should now look more closely at what Tony Chapman did from 1949.
Scottish Coaching:  1949 – ’61
This website uses cookies to ensure you get the best experience on our website.Learn More Got It