Yhis is the second part of Steven’s profile.   For the first part, go to  Steven Doig – the runner 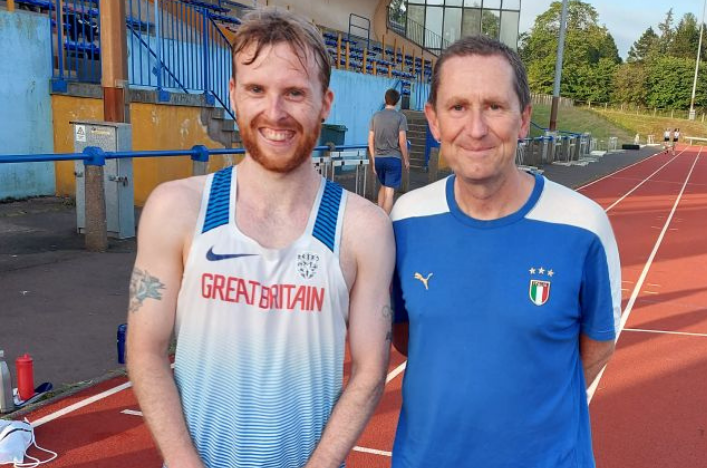 When he returned to Scotland in 1998 he kept on running but it was not as serious as it had been.   For instance he ran in the Beveridge Park 5K races in 2003 where in May he was second with a time of 16:31 and in June set a record for the course of 16:02.   Good enough running but not of his previous standards.   The problem was of course with his legs – run, start to get fit, get sore legs, stop for a while, repeat.    But as the competitive running tailed away, the coaching career opened up.   It was nt a rushed or hurried decision, nor was he talked into it by a club official.

His next venture in the sport was indeed as a coach.   His experiences as an athlete both north and south of the border, his inquisitive nature and intelligence all indicated that he would be a success in this capacity.   He had been interested in coaching as far back as 1996 when he was in London and got his club coach award.   His actual coaching career started in about 2006 with a small group of 9 and 10 year olds so that his daughter Shona had a group to train with.

Because his runners were progressing and performing successfully others joined his group and he  reached the stage where he had to divide them into five or six groups  with assistance from two other adult club members.   The athletes covered three clubs, although the vast majority were Fife members, and covered all age ranges but are mainly U17, U20 and Senior athletes.    Steven, like all good coaches, put in the hours trackside,  with sessions most days at either Kirkcaldy or Pitreavie tracks.   There is also of course the work put in away from the track in organising the year, organising the individual sessions, liaising with physios, medics and other coaches: when we met for lunch on one occasion the first 20 minutes were taken up trying on his mobile to arrange a race for an athlete to get a qualifying time via a whole series of texts.   The time spent and effort put out is appreciated by the athletes and their parents. 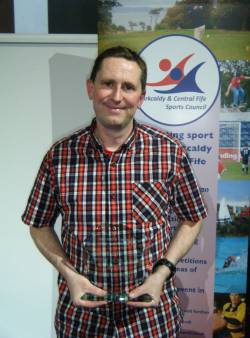 In 2014 one of his athletes, Adam Scott, won the English Under 15 1500m in the championships at Bedford.   The report in the local paper read: “Kirkcaldy athlete Adam Scott finished his season in fine style last Sunday when he won the 1500m title at the England Athletics Under 15 Championships. Adam, who is 14, is a pupil at Balwearie High School and competes for Fife Athletic Club. He is undefeated in his age group over 1500m and prior to his comprehensive victory at Bedford, where he defeated his closest rival by four seconds, he had already won the Scottish Indoor Age Group Championship and the outdoor East District, Scottish Schools and Scottish Age Group Championships. Adam also shattered the Scottish under 15 indoor 1500m record in February taking a whopping 10 seconds off the previous best.

His victory in the England Athletics Championship is, however, his greatest achievement to date and this win effectively crowns him as British champion as all of the main contenders for this title were present at Bedford. Adam, who is ranked first in Scotland in the under 15 age group over 1500m, had one final outing before hanging up his spikes for the season. At the Pitreavie Trophy meeting on Sunday he won the 800m in 2:02.77 to climb to the top of the rankings in that event too. He will now take a short break before setting his sights on the cross country season where he hopes to win the East District and Scottish titles.

Adam has been coached by Steve Doig as part of the Fife Athletic Club group in Kirkcaldy for seven years and his superb performances this summer will undoubtedly inspire his training partners as they strive to match his achievements.”

In 2016, 10 years after he had taken up coaching, he was nominated as Coach of the Year by the Kirkcaldy and Central Fife.   The following testimonial was posted on the Fife AC Forum:

Adam Scott, U18/U20, has been selected to represent Scotland in the Commonwealth Youth Games in the Bahamas in July this year.

I would like to take this opportunity to thank Adam’s coach Steve Doig for his commitment and support to get Adam to this point. No athlete ever stands alone and Steve has stood with Adam guiding and supporting him through the successes and the failures; always there, always ready to help Adam no matter what – in typical Steve style of course.   Steve has stood in Beveridge park with snow on the ground and has stood track side with the wind and rain belting down all to support Adam and his athletes. As a parent I think that Adam could not have had a better, more dedicated, or more skilled coach than Steve.
Adam has been supported by many others – Gabby Doig, Adam’s training partners in Haraka Kasi, Mark Pollard and Robert Hawkins of the Scottish Athletics National Academy, and Sports Aid Scotland and the Robertson Trust.
Adam is not Steve’s only Commonwealth Youth Games athlete: Bethany McAndrew of Pitreavie AAC has been selected for the 100m hurdles and is part of Steve’s Haraka Kasi training group.

The Team Scotland resume of his career read:

Scottish U17 record holder over 1500m, Adam finished 5th in the 3000m and 9th in the 1500m at the Bahamas 2017 Commonwealth Youth Games. A multiple Scottish Age Group champion, with titles stretching back to 2013 as an U15 athlete, 2015 was a breakthrough year for Adam as he took silver at the London Mini Marathon before going on to win gold at both the Celtic Games in the 800m and SIAB Schools International in the 3000m. A Scottish U17 Cross Country title in the winter of 2016 paved the way towards his Scottish record breaking 3.52.07 run over 1500m at a British Milers Club race in Manchester in May. Adam started 2017 in the same vein with gold at the Scottish U20 Championships and Scottish Schools Championships indoors, as well as taking gold at the Scottish Junior Road Race Championships. 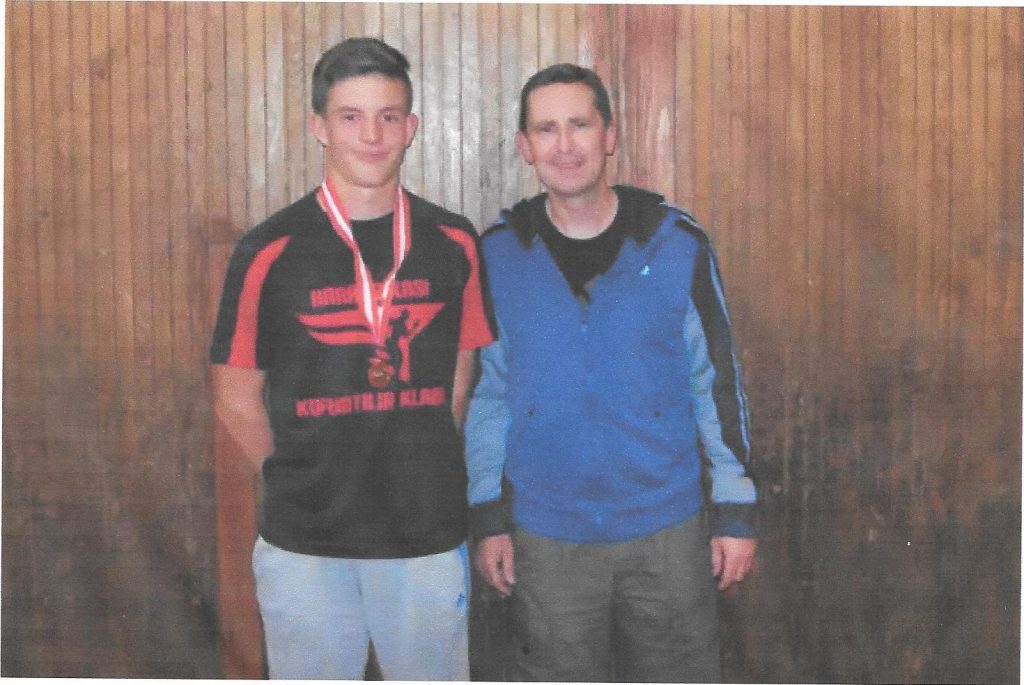 The bold typeface above is mine just to emphasise further the appreciation expressed.    There is mention of the Haraka Kasi group.  You can follow their athletes progress at https://twitter.com/HarakaKasi .   They describe themselves as an “Athletics training group based round Pitreavie track. Cross club; focused on camaraderie and results – not vests.”   What is it? Like many training squads, his athletes wanted a group identity but Steve resisted one that used his name – ostentation was never his style in any walk of life.   Since the Kenyans are noted distance runners. he came up with the two Swahili words that just mean ‘speed’  or  ‘fast’.    The athletes liked the name and it stuck.   They liked it so much that they all clubbed together, and raised several hundreds of pounds, to buy a personalised car registration plate for him which reads  KA51 RUN for him. 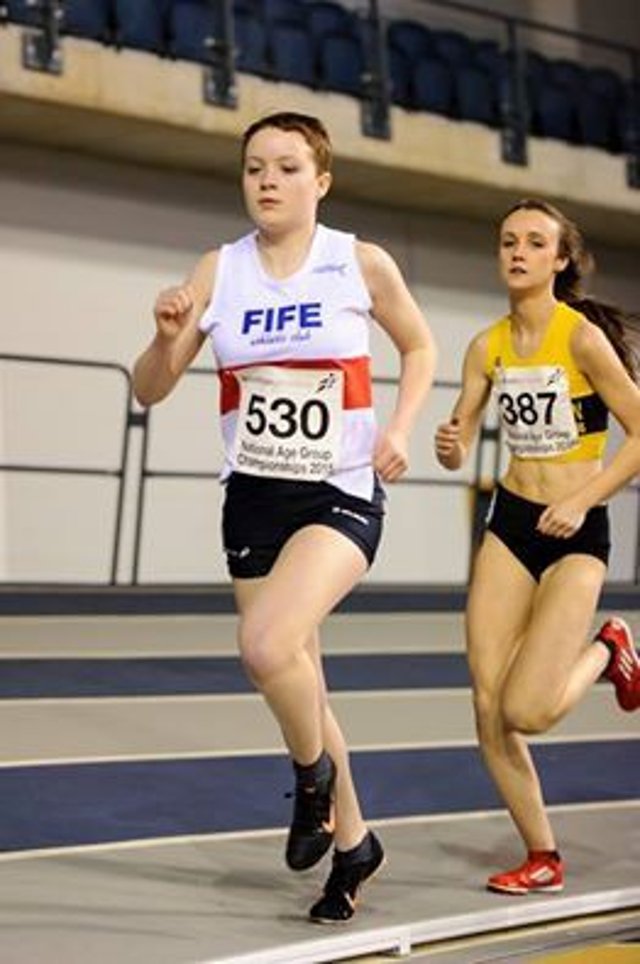 So far Steven  has had three athletes who have graduated from the elite Scottish athletics National Athletics Academy: Adam is one, graduated in 2018 as did Annabel Simpson (above) who after many very good races in 2017 and 2018, ran in the inaugural Commonwealth Half Marathon in Cardiff in 2018 after running a 76:28 pb.   She was maybe better known as a top class 1500m runner as a glance at her entry in the Power of 10 website shows.   There have also been athletes competing for Scottish international or representative teams.

Most recently there is the running of Owen MIller who graduated in 2016, before either Adam or Annabel. 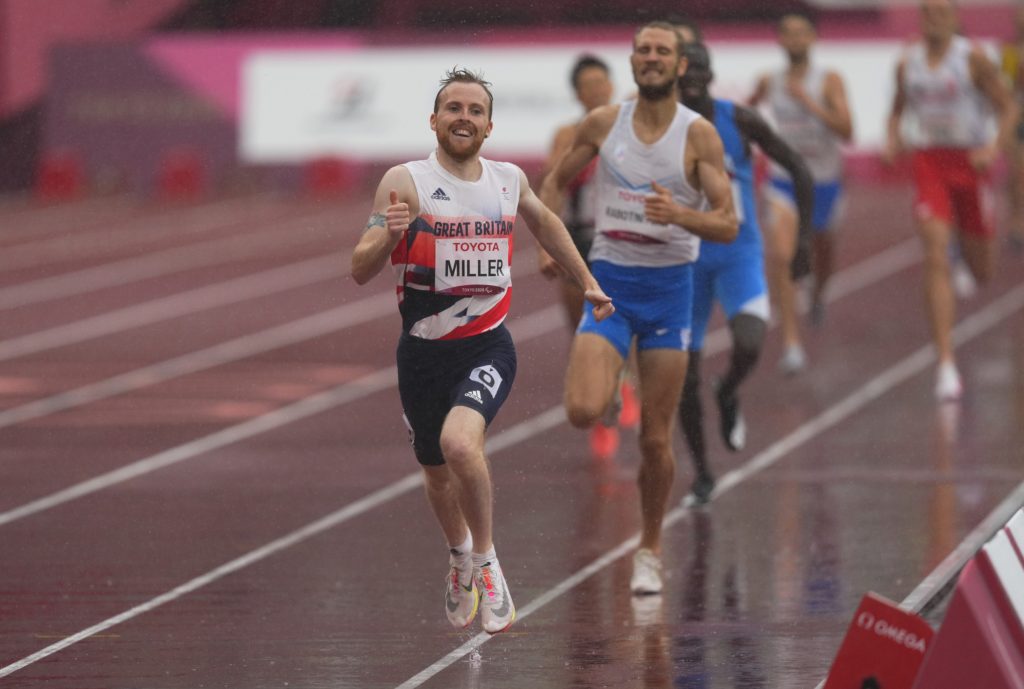 The covid pandemic in 2020 meant that there was no international racing that year and many athletes had their Olympic dreams put on hold – one of these was Owen Miller who had been aiming for the British Paralympic team.  Coached by Steven, he was one of three Scottish runners to go to the event when it was run in 2021.  Not only did Owen make the team, but he actually won the race with a very good tactical piece of running.   You can see the race on YouTube at Massive Effort Captures Paralympic Glory | Owen Miller | Tokyo 2020 Paralympics – YouTube    .  There were 14 in the race and Owen won by 1.21 seconds.   As anyone can imagine, Steven was delighted at Owen’s race – he has been coaching him since 2016 and the athlete was clearly in good condition physically and mentally properly equipped for the event.   The whole group that he was coaching took a share of the credit for it.   Steven was one of four coaches nominated for the Performance Coach of the Year by Scottish athletics. but despite Owen being the only Scot to win an Olympic 1500m the award went to Laura Muir for her superb run in the  Olympic 1500m where she finished second. 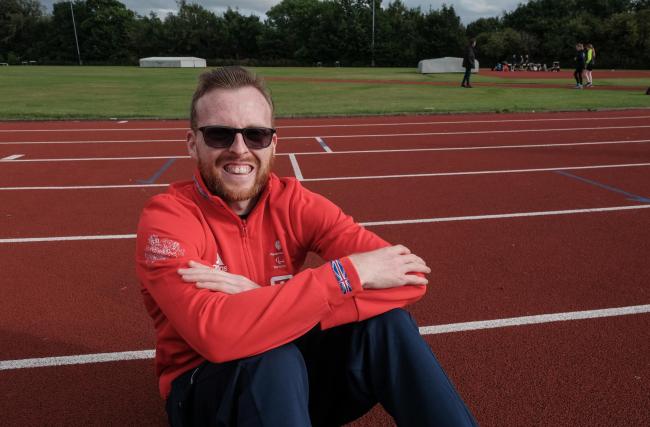 Power of 10 tells us that Steven currently is currently working with a group of athletes, all in the U17, Under 20, Senior and Under 23 age groups, mainly from Fife AC.   Have a look and see the standards being reached.

As a coach, the future looks bright for Steven who has followed a progression from international athlete to successful and respected coach.