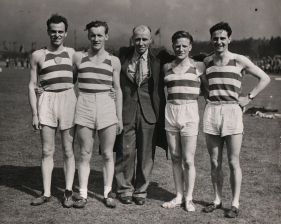 Athletics historians of whatever generation would look at the picture above and look for the names of the athletes.   There may even be arguments about the exact names of the runners.  Very few would look at the man in the middle who was the team coach.   All of the athletes won many medals for relay championships in Scotland in the 1950’s.   The 4 x 110 yards, the 4 x 440 yards and the medley relay all fell with amazing regularity to teams from Victoria Park AAC.   The  conveyor belt of international athletes produced such as Willie Jack, Alan Dunbar, Ronnie Whitelock, Bobby Quinn, Harry Quinn, Willie Breingan and many more.   They were not produced by accident – they were produced by the labours of Willie McFarlane who is the gent in the centre of the picture.   Had there been a medal for the coach of a winning championship team, he would have had more than any of the athletes who took home some precious metal.   The club cross-country and road running team is rightly lauded for their feats but the sprinters were just as good, just as special.   It is only right that we look at Willie McFarlane and what he gave to the club. 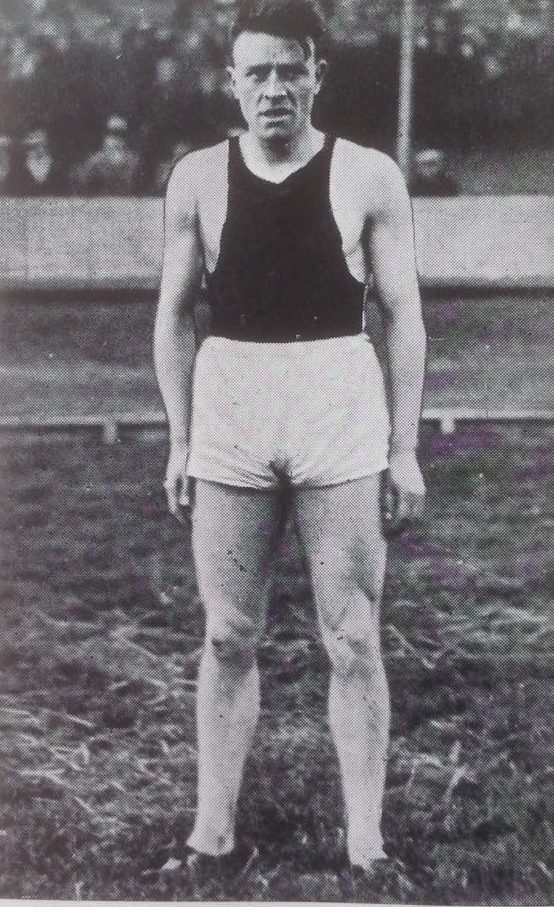 The Glasgow Herald tells us that Willie was 26 on 2nd January 1933, so he must have been born in 1907.  It also tells us that he had been running since successfully since 1930 when he won the Clyde FC 120 yards sprint.     Held on 26th July, 1930, the Clyde FC Sports were, unlike Rangers FC, Celtic FC or Partick Thistle FC Sports professional Games and always attracted big crowds.  There were not many athletic events – six in all – and McFarlane won his race off 13 yards, beating J Logie (Muirkirk – 12 yards) by two yards in 11 10-16th secs.   If he had run at all in the New Year Sprint he was unplaced in his heat.

1931 was a different story.   It began like every year for the pedestrians at Powderhal and the report on the final day’s running was as follows:

There was a big surprise in the final of the 130 yards New Year Handicap Final at Powderhall Grounds yesterday.   The favourite, W McFarlane, Glasgow, 8 1/2 yards, about whom odds were asked, was beaten by T Tait, Prestonpans, a 2 to 1 chance, after a thrilling struggle.  ….    The Glasgow runner returned the fastest time in the second ties.”

It was an expensive slip up – the winner won £100 and second placed McFarlane received £5!

If McFarlane was favourite for the title in 1931, it was a different story the following year.   The favourite was HJ Morgan from Wales.   He was until McFarlane defeated him the first round on 1st January.   McFarlane gave the Welshman two yards of a start and beat him by three in 13 7-16th seconds.   Unfortunately he himself was beaten in the second round by DW Brown from Aberdeen and did not make the final.   Brown was second and received twice as much as the Glasgow man had the previous year – £10.

1st January in 1933 was a Sunday and the first rounds of the sprint were held on the Monday.  The Glasgow Herald of 2nd January commented that there would some good sport at Powderhall but only two runners were backed – W McFarlane (7 yards) of Glasgow and K Price (10 1/2) of New Tredegar.   There were thirty three heats that year and the fastest times were by those two runners although neither had the fastest time in the heats.   Came the final and the headline said

There were some fine performances at Powderhall Grounds, Edinburgh when the famous New Year Gala was concluded. It is difficult to know which to place in the premier place – the fine distance running of J Campbell of Craigneuk in the ten mile marathon in which he defeated Allan Scally of Broomhouse, or the magnificent sprinting of W McFarlane of Glasgow in the final of the 130 yards handicap.    …

There were no doubts about the success of W McFarlane of Glasgow in the ‘big sprint’.   He showed himself to be a runner of fine physique and a stout heart.   Neither in his heat on the previous day, nor in his second tie yesterday had he to reveal anything of his power, but the final demanded of his very best.   Conceding starts up to eight yards, he quickly settled to his task.   He did not show the same hesitancy at his mark as he had done two years ago when he ran second to T Tait of Prestonpans.   McFarlane had the measure of his opponents after covering 100 yards.   The second favourite, T Melrose of Leith, did not prove a barrier to McFarlane’s success.   It was C Paterson of Burnside, running from the 15 yards mark who caused the Glasgow man most trouble.   McFarlane, however, got ahead 15 yards from the tape to win by two yards from Paterson, with Melrose third, half a yard behind.

McFarlane has been a prominent racer for the past three years.   In 1930 he won the Clyde FC 130 yards sprint, and his performance at Powderhall two years ago has already been commented on.   Last year (1932) he was defeated in the second tie by DW Brown of Aberdeen who was the ultimate runner-up.   McFarlane is 26 years of age, weighs 12 stone 2 lb and stands 5′ 10 1/2″.   He was trained at Barfield Ground, Largs by Mr G Munro and was sponsored by Mr J Girklas, Glasgow.”

We now have a physical picture building up which is added to by the following extract from the book ‘Powderhall & Pedestrians’:

“Possibly the best tribute that could be paid to McFarlane would be to describe him as “Clyde built” – which expression while conveying a wealth of meaning to experts in the shipbuilding world, can be applied with equal facility to the Western athlete.   Powerfully built, with deep chest and strong muscular limbs McFarlane approximates to that physical type of sprinter which was so keenly sought after by the old time shrewd “gaffers” of the Sheffield pedestrian era.   Not only did he strip big, but he was also the great runner which his physical make up suggested.”

Eric McIntyre adds that “McFarlane was a Glasgow joiner and in an interview with my late brother Kenny told of the havoc the job played with his knees. My father competed alongside him in the Games of the 1930s and spoke in awe of his speed.   He was not a tall man and ran with clipped strides like Jesse Owens or Michael Johnson”. 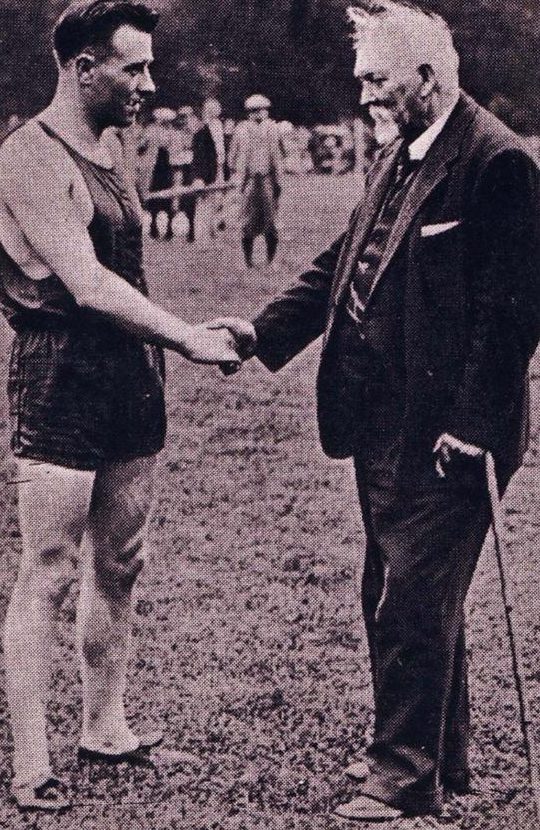 The caption on the above photograph reads:  “Don Wight in his 83rd year meets Willie McFarlane of Glasgow at the Hawick Common Riding Games of 1934.   McFarlane like Don Wight was a dual winner of the Powderhall Sprint in 1933 and 1934.   Don won in 1870 and 1876.   On each occasion both men ran off scratch.”

1934 started with the Powderhall New Year carnival and McFarlane was favourite for the title.   He had been favourite two years earlier and did not make the final.   There were 31 Heats this time round and Glasgow Herald of 2nd January read:

“Last year’s winner, W McFarlane, Glasgow, is the favourite for the  Powderhall New Year 130 yards handicap, the heats of which were run yesterday at the Powderhall Grounds, Edinburgh.  At the conclusion of racing he was quoted at 6-4 against, while J O’Donnell, Niddry, was second in demand at 5-2.   …   The scratch man, McFarlane, when returning 13 4-16th sec eased up a good distance from the tape, and had time to look round twice before getting to the tape ahead of T Melrose, Leith.”

In the second round, he was in the second tie of five, and running off scratch.   Move on 24 hours and the Herald for 3rd January, tells us :

Some excellent performances were seen at the closing day of the 1934 New Year’s pedestrian carnival at Powderhall Grounds, Edinburgh, yesterday.   One does not wish to belittle in any way the fine running of J Campbell of Craigneuk in the ten miles marathon race, the scratch award of which he won for the second year in succession, but it must be recorded that the racing ability shown by W McFarlane of Glasgow in the 130 yards handicap surpassed in brilliance any of the other items on a varied programme.   McFarlane gave a notable performance being the first runner to win the event in two successive years and the first scratch man to win the event outright. “

McFarlane had won his second round tie in 12 12 10/16th seconds and the Final in 12.10 1/2 seconds to win £100 and a gold medal.   It was a wonderful performance and recognised by the promoter Mr AM Wood who presented him with a silver cup inscribed:

As a simple appreciation of his magnificent record performance in winning the Powderhall New Year Sprint Handicap from the scratch mark for the first time ever over 130 yards in 12 10 1/2/16th seconds.   McFarlane, having won in 1933, created another record with two successive wins.” 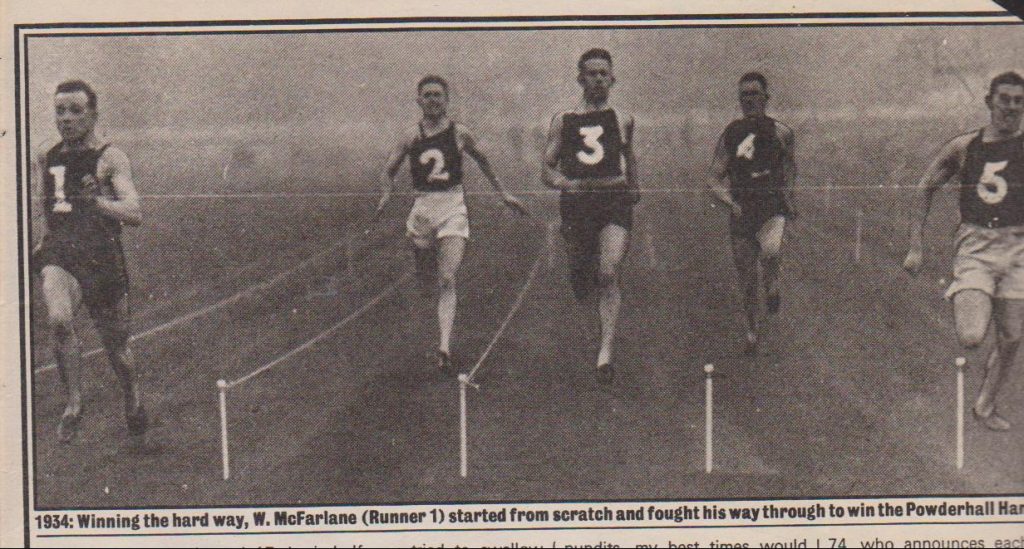 He followed that performance with a run at Hackney Wick grounds in London on 15 Jan 1934 at ‘Professional Championships’ he won 100 yds scr in 9.9s. and in 130 handicap came 3rd in final but had won his heat off scratch in 12.63s.,   It was fantastic running then at that time of year without the benefit of indoor training!   By March he was in Australia for the pro running season there where he competed in international pro sprints but his performances were not as good as his earlier ones and he came 4th in each of his races.

That was to be his last Powderhall Sprint Final but not the last that would be heard of McFarlane.   The following is an extract from the New Year Sprint website and can be found at this link

“During the past 120 years the “Sprint” has produced many top class competitors. Dan Wight of Jedburgh, the 1870 winner, heads a long list Scottish Champions. Other legendary names from the past include Harry Hutchens of London, never a winner, but the fastest sprinter of the century and “scratch” man from 1880 to 1895. The record run of this period is credited to Alf Downer of Edinburgh who in the 1898 sprint ran 128.5 yards in 12.4 secs. On a comparative basis with later “crack” runners, Downer stands out as a great all round running champion. The First World War witnessed the great Australian champion Jack Donaldson and England’s Willie Applegarth, a brilliant former amateur. The most famous winner of all was Willie McFarlane of Glasgow who achieved the unique distinction of winning the event two years in succession, the second time from the scratch mark in 1934 – a feat never repeated.”

You can read about Willie McFarlane as a coach at  this  link .

[Many thanks to Hugh Barrow, Jack Davidson, Shane Fenton, Eric McIntyre and the Memiours of Pro Athletes for help with this part of the profile]