Colin Youngson has had a look at Violet Blair’s career as an endurance runner of quality with superb running over the country, on the road and particularly on the track.   First we have the basic facts which are impressive, and then we have her replies to the questionnaire.

She appeared in the Scottish Athletics ranking lists no fewer than 40 times between 1976-1992. 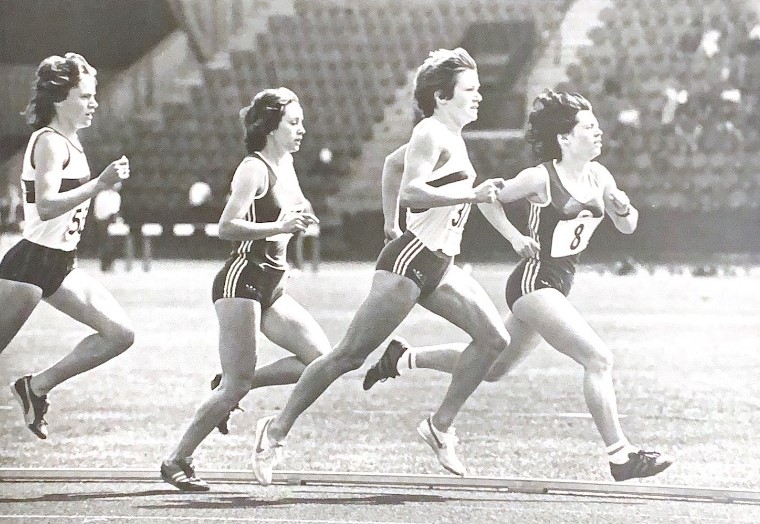 Violet in full stride, third from the left

1981: ESH were fourth but Violet set the fastest time of the day. 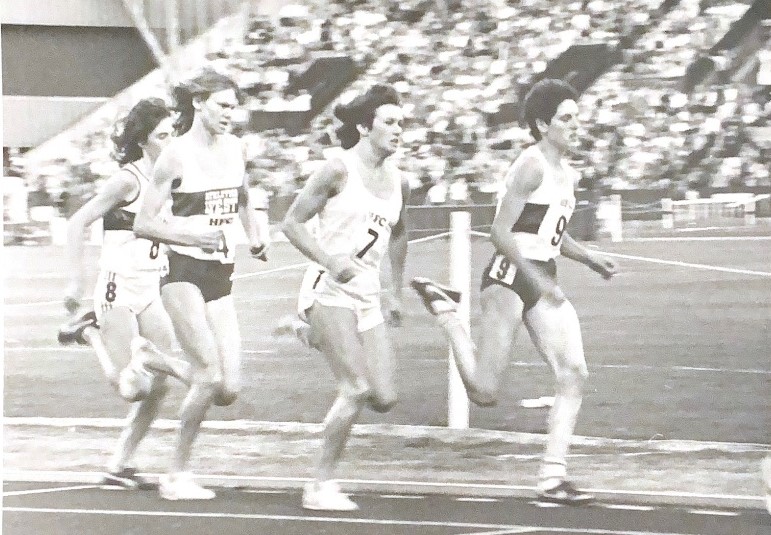 Violet third from the left

When I was in 5th year at school, I went along to Grangemouth Stadium with a friend who wanted to get fit. She was a Scottish International Table tennis player. She only went for a few weeks but I joined Bob Crawford’s group and started doing sprints and long jump. I then joined Grangemouth Olympiads and started competing for them in SNWL and Motorway league. Bob Crawford entered me and took me to my first cross-country and that was the start. I then joined John Erskine ‘s middle distance group which included Terry Young and Alex Bryce. When I went to University, I joined the Hare and Hounds and I would train with John’s group in holidays

When I joined Edinburgh Southern Harriers I trained with Bill Walker and saw how hard his track athletes trained – people like Paul Forbes and Peter Hoffman. I started keeping a training diary and planning what races I wanted to run and when. When I went to Uni, I rolled up at Freshers Sports Fair and asked to join the Hare and Hounds. They were stunned, because they didn’t have a Women’s team. I became the first Ladies’ Captain – and now Edinburgh Uni Ladies Hare and Hounds team are among the best in the country.

Fun and friendship. Keeping fit. Fresh air, being outside and, during the pandemic, a means of keeping sane.

My best performance was breaking the Scottish Native Record for 1500m at the Scottish Championships. My 56.59 for 10 miles pleased me as well because I wasn’t a fan of long distances.

My run at the Olympic Trials in 1984. I had been training well but unfortunately went down with a stomach bug a couple of days before Gateshead. I finished 12th in 4.18.12.  I was really disappointed because I had been looking for a PB.

None really in athletics. I really loved my time in athletics. Yes, I would have loved to have made a Commonwealth Games team but it wasn’t to be.

I retired from working and took up golf. I am gradually whittling down my handicap. I play for my club in the Midlothian ladies league. An outlet for my competitiveness.

Travelling. Running in all countries of the UK and abroad. I still miss the excitement of laying out my kit and packing my bag ready to travel to a race. Even spending hours on a bus going up and back to UK Women’s Leagues was fun. Meeting lots of interesting people and making new friends. European Clubs Cross Country champs were always really good fun. The camaraderie of a hard training session. Chatting on a long Sunday run along the canal.

I used to average about 60 miles a week in the winter. A 10 miler on a Sunday morning, track sessions on Tues/Thurs/Sat. One fast 4 mile run usually on a Friday. 2 circuits and a bounding session. My favourite track session was 10x400m with a minute recovery.