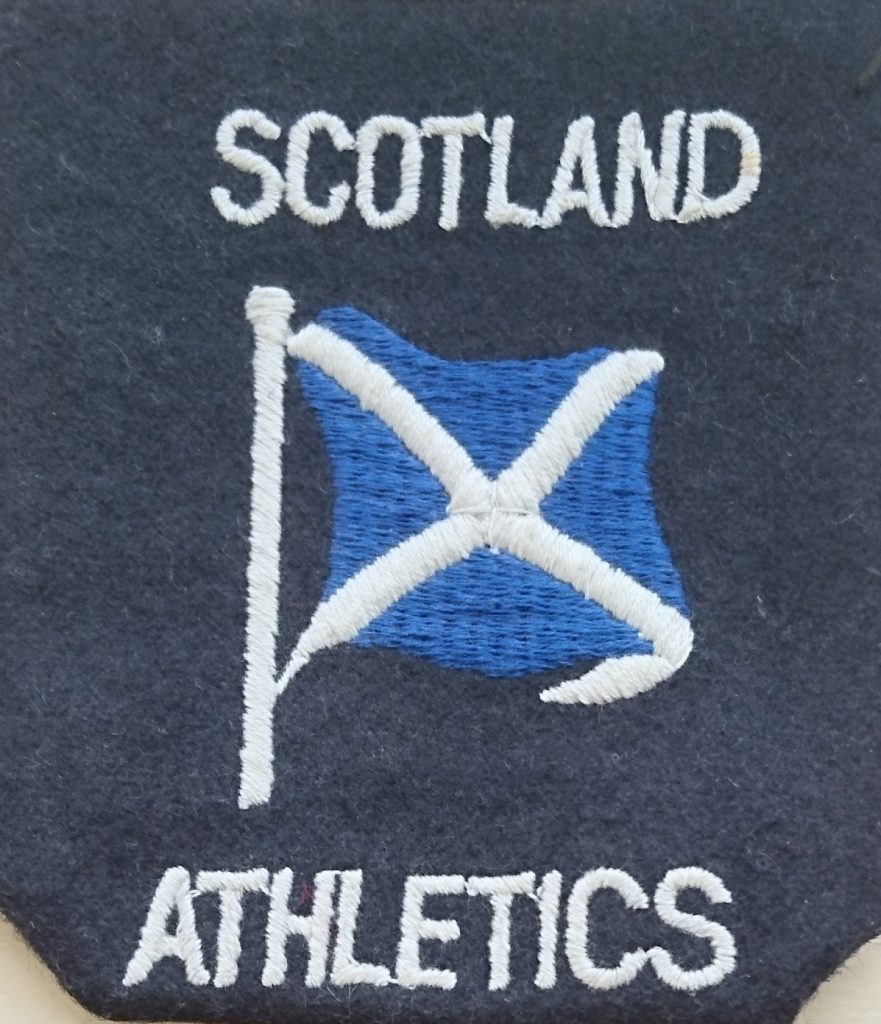 .Did you call them track suit badges or patches?   Did you collect them and wear them with pride or not ever wear them?   For many years they were awarded for talent, for effort,, for having been a member of a particular team, for a specialist club or for many other things. 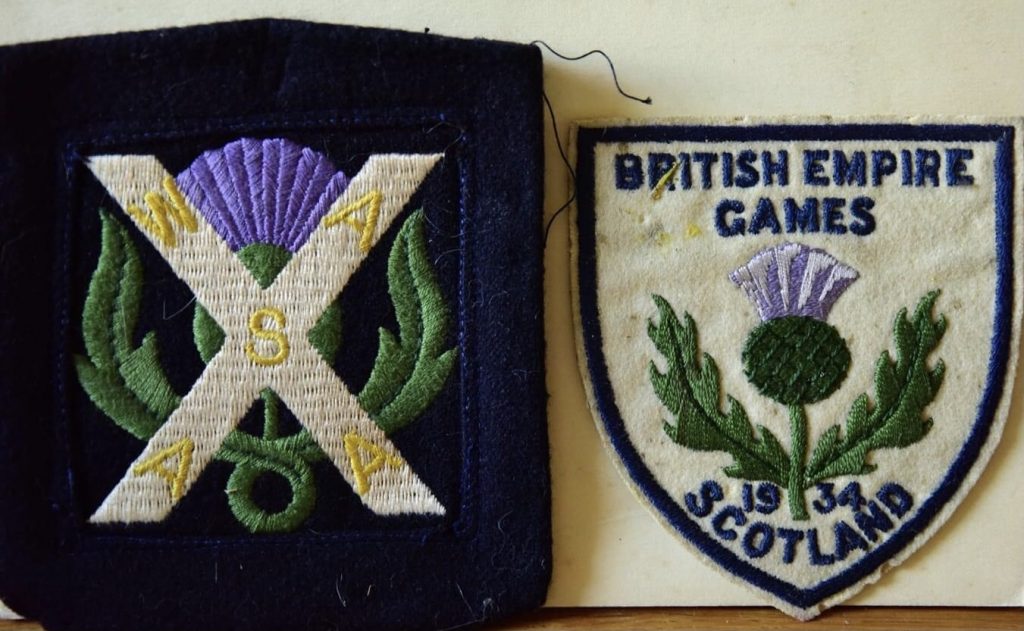 Isn’t that 1934 Empire Games badge a treasure?   Both those above are Mildred Strorrar’s and we have them courtesy of Janet Hardy.

Before going on, the help of Alex Jackson, Colin Youngson and Hugh Barrow in the making of this page should be acknowledged.  The badge at the top of the page was a blazer badge for Scottish track & field teams, the two below were for cross-country. 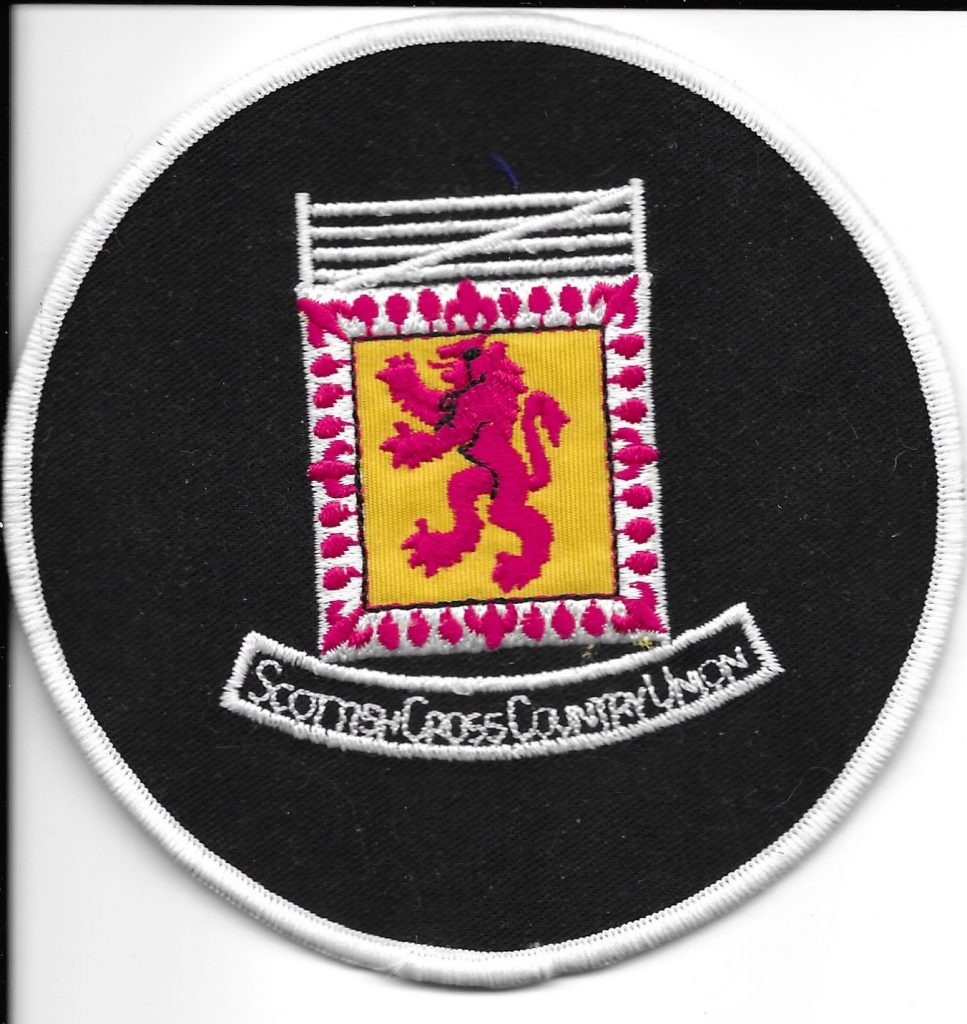 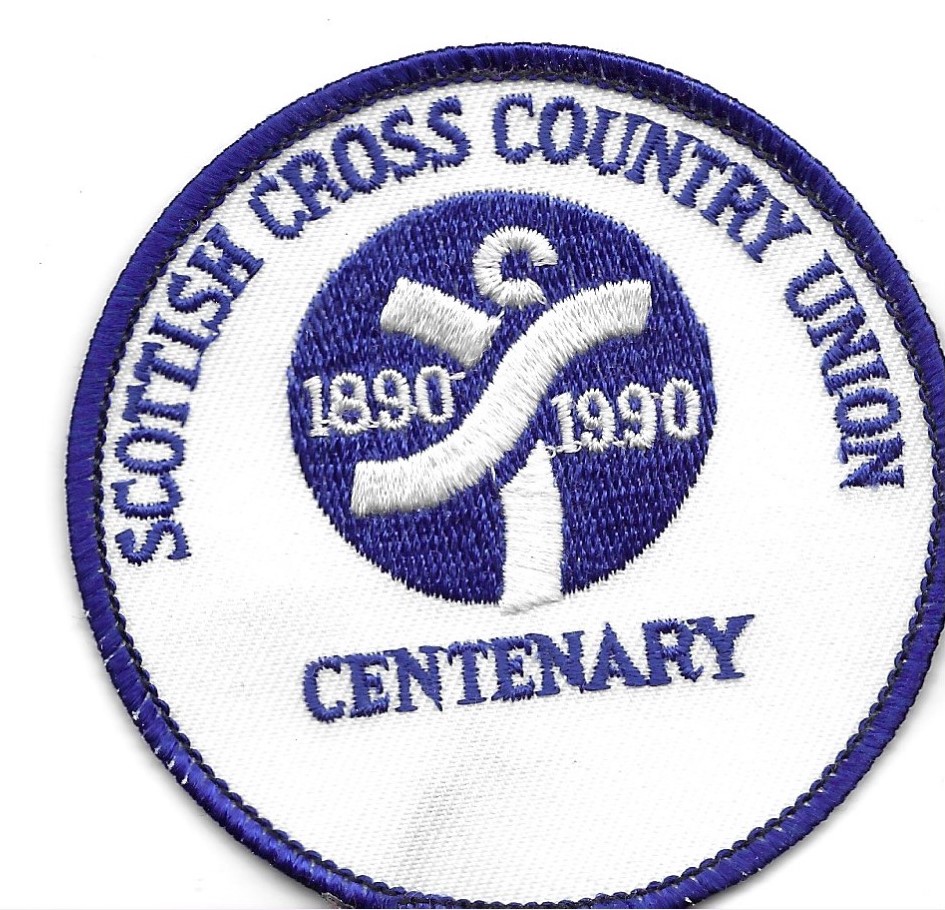 There was also a wire version of the above centenary badge for officials blazers – they also did wire coaches badges for blazers, 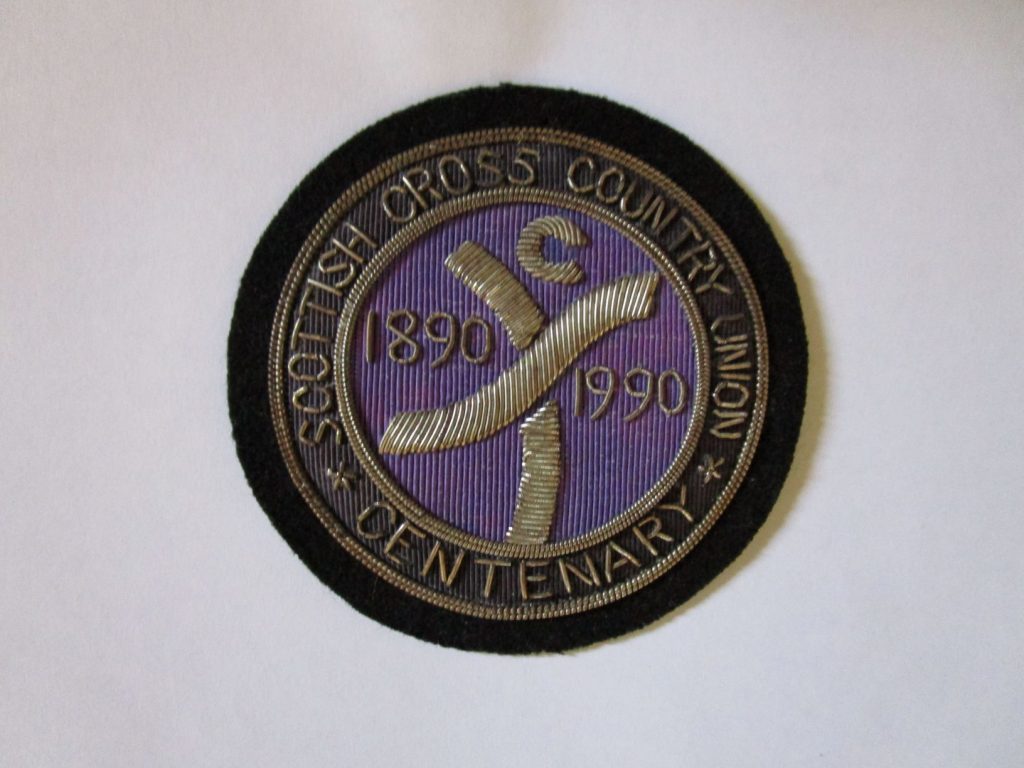 Alex Jackson tells us that at the 1986 Commonwealth Games there was an officials cloth badge: BHS supplied the clothing so they were allowed to put their name on the badge.   Then the store went bust.   The two were not connected, I don’t think. 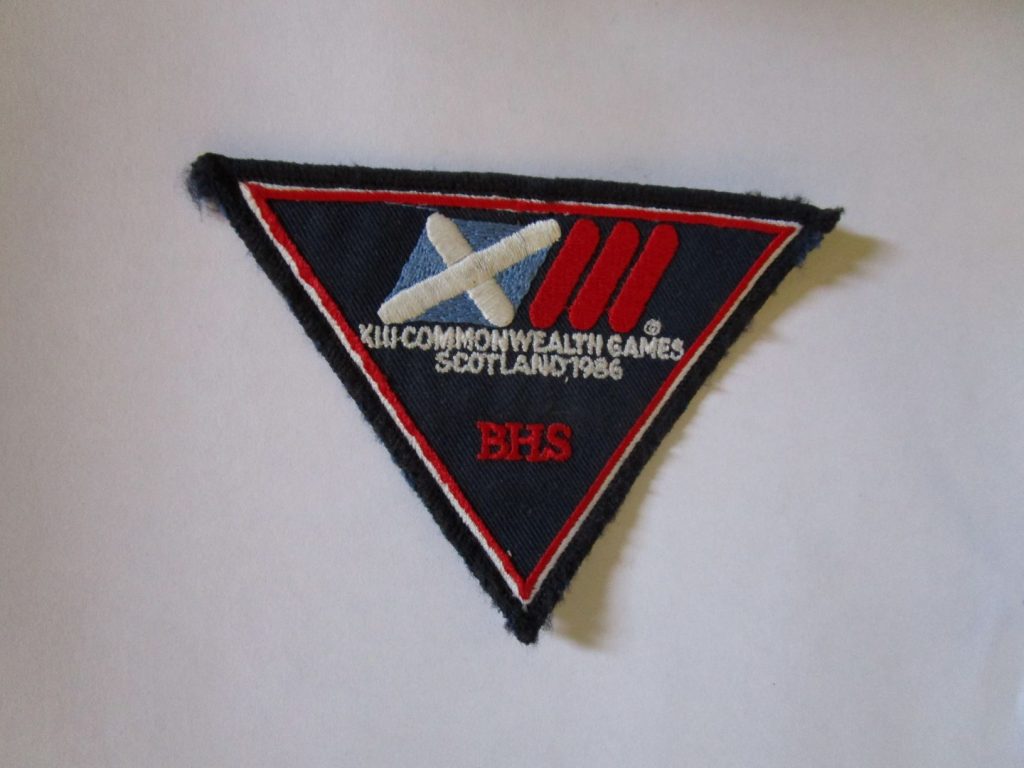 While we are looking at ‘official badges’ look at the three below.  Alex Jackson tells us that they were ” Inter District badges.”   He says, “At around 1986 Alex Naylor set out a endurance “Plan for the Future”   One aspect was  badges for young  athletes selected for the Inter District cross country teams which I think petered out when SAF came along. 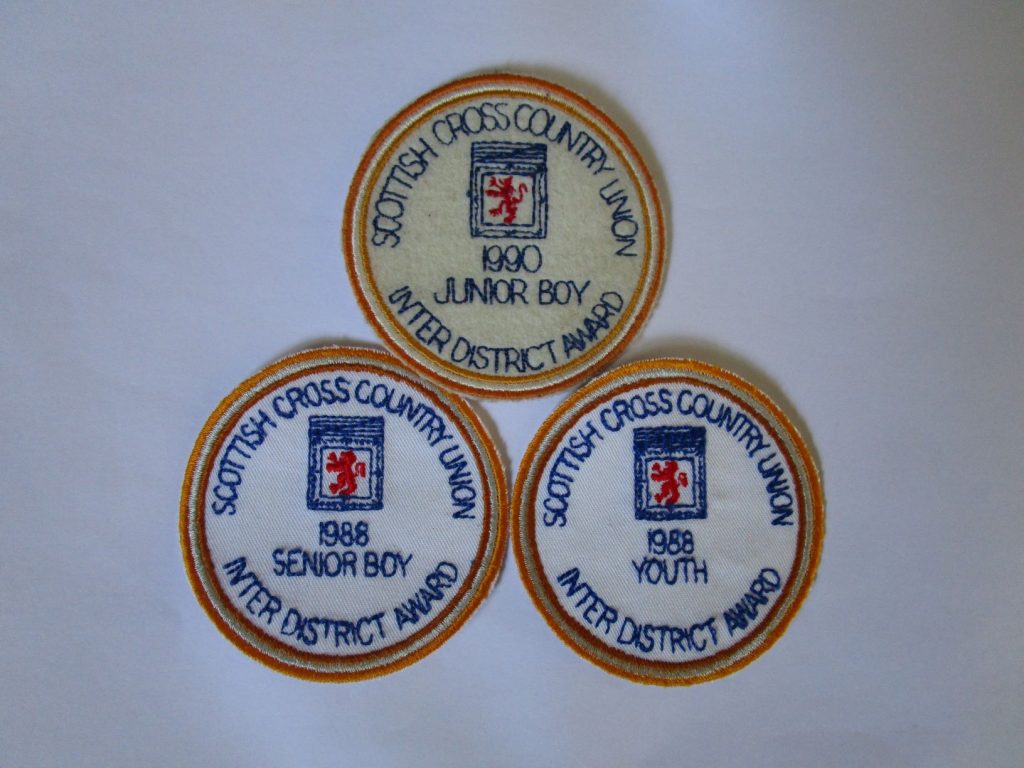 There were badges for specialist clubs – there were several of those such as the Whip and Carrot Club for high jumpers and  Splash for steeplechasers but the only one which survived (and thrived!) was the British Milers Club which had its own pullover, tie and badges – Hugh Barrow’s original badge is below, and the BMC coach’s badge is below that – worn by such as Derek Parker of Kilbarchan. 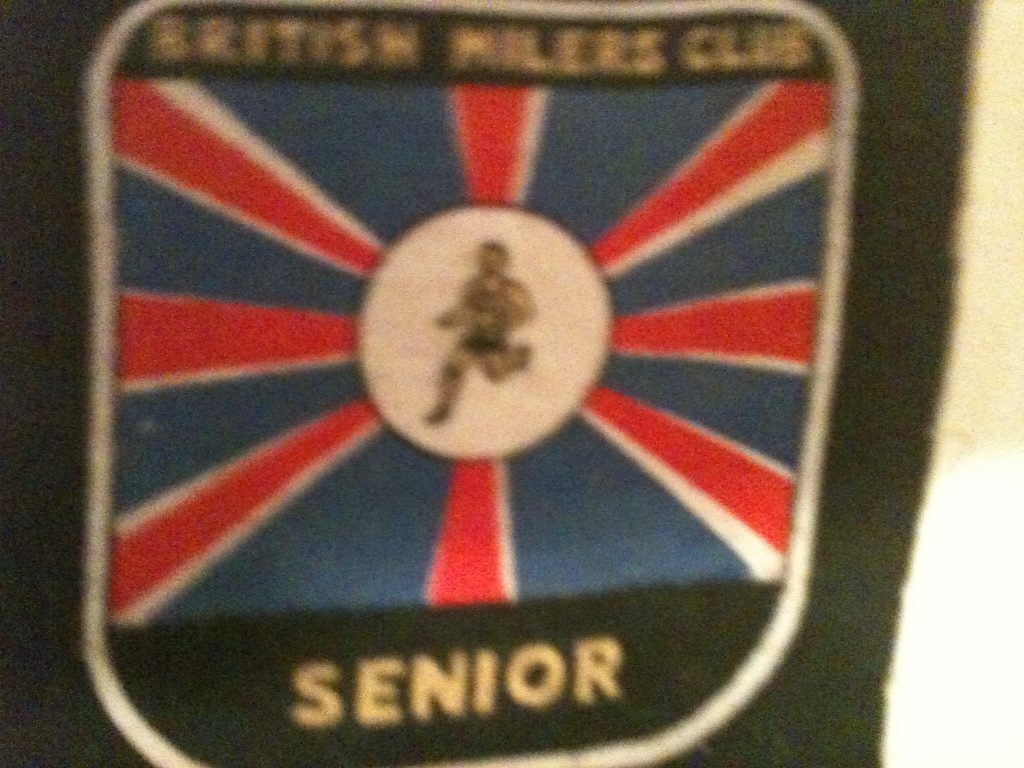 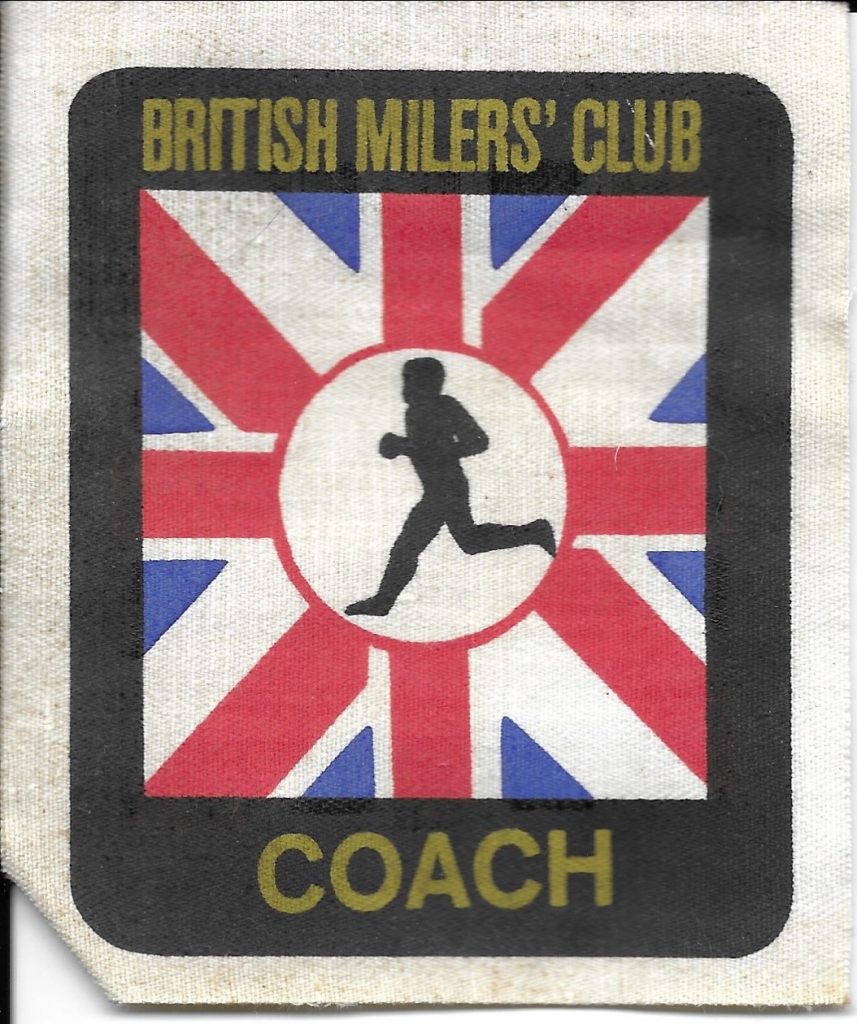 Coaches liked them – maybe because they were often overlooked, possibly because most of them were undervalued or just because they liked to be known for what they were.   The one below is for the National Association oif Sports Coaches, and below that is the BAAB Senior Coach badge – there were three of them denoting the level at which the coach could work – Assistant Club Coach, Club Coach and Senior Coach. 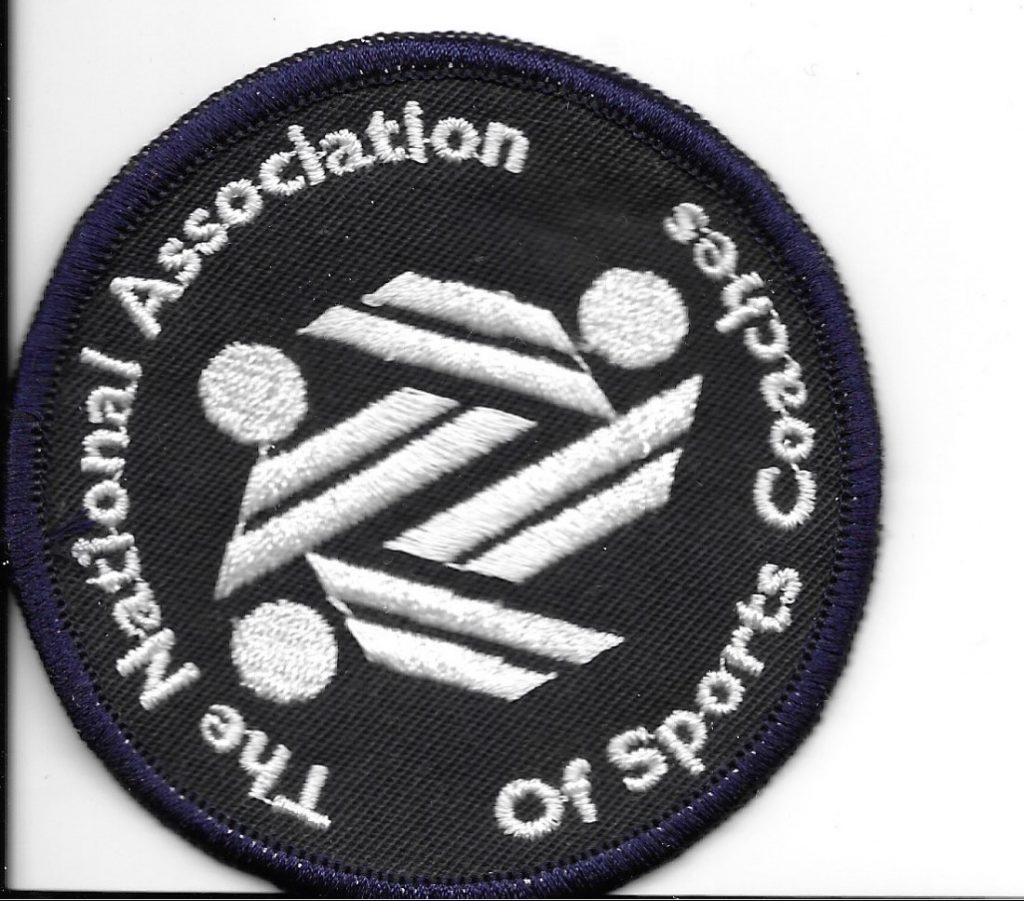 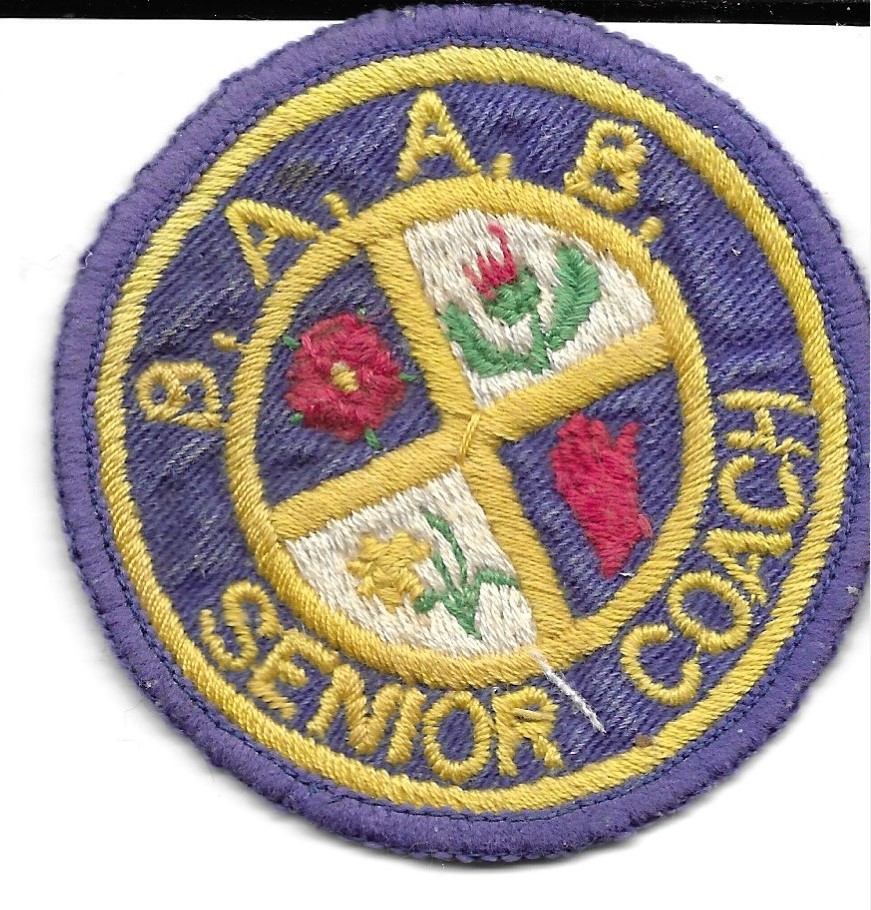 Going back to specialist clubs for a moment, during the marathon running boom in the 79’s and 80’s Ron Hill set up the British Marathon Runners Club,  and new members were issued with free shorts (the ones with the sides open but overlapping slightly) and a patch to wear somewhere about one’s person.   The patch is below. 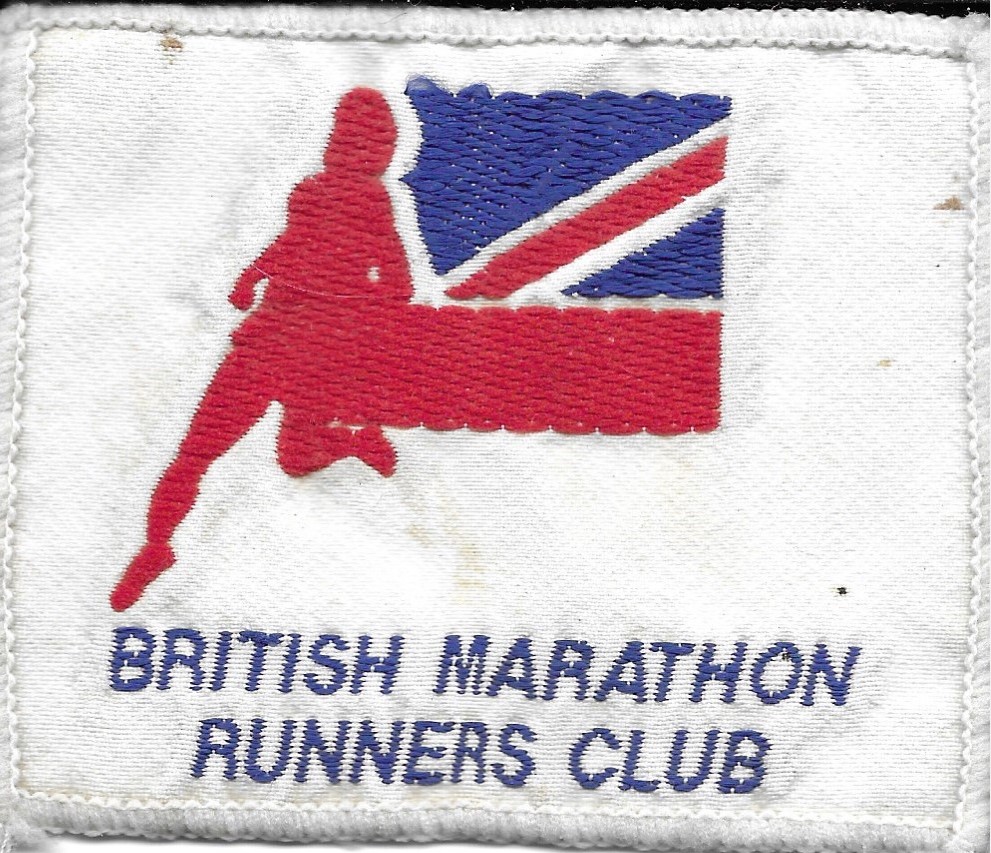 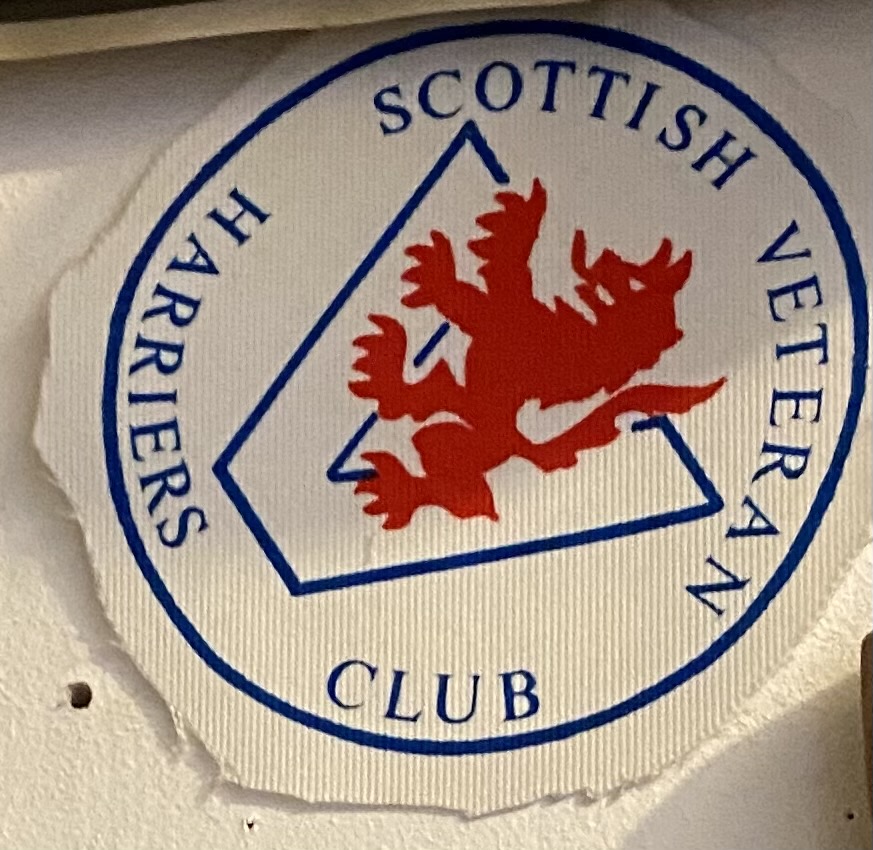 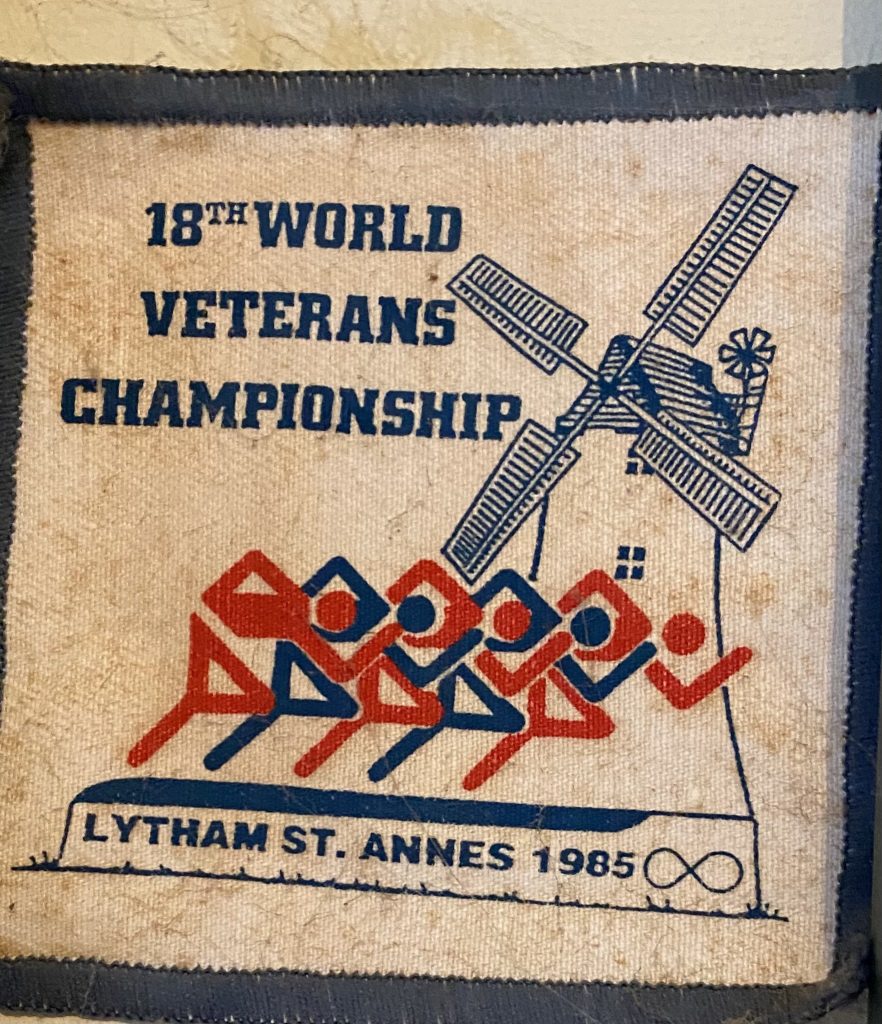 Others had to be hard earned, they were not ‘for members only’.   These ones were all won by Colin Youngson and Hugh Barrow: 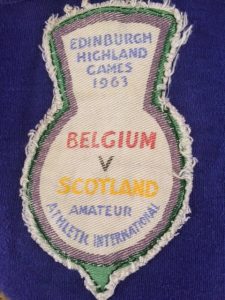 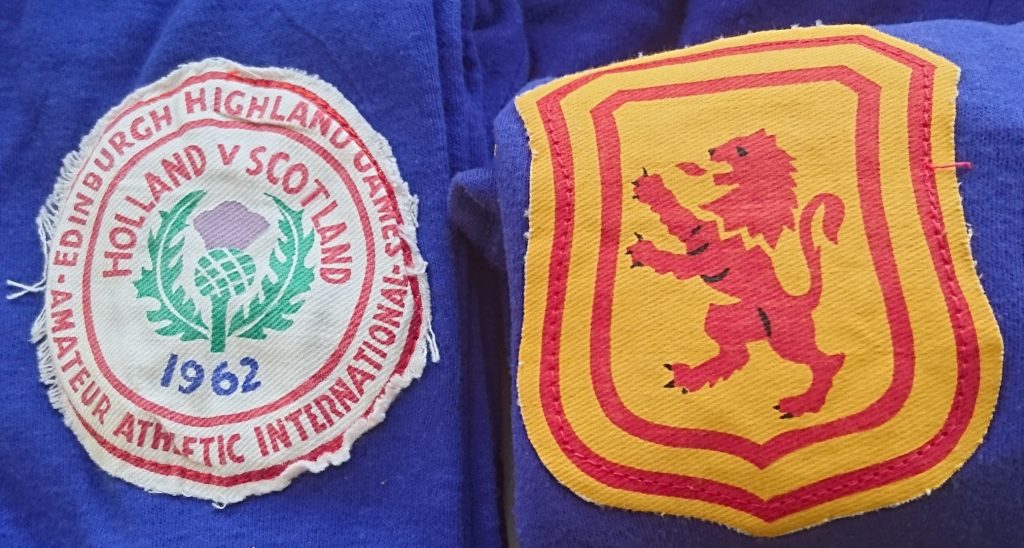 The badges above were Steve Taylor’s and passed on by Colin Youngson, some of whose collection is below 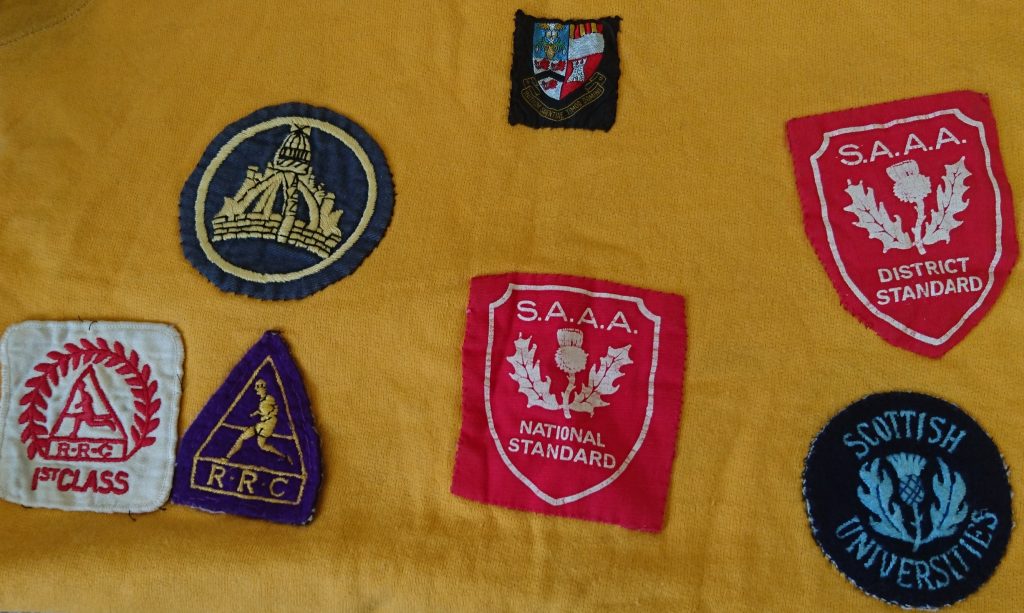 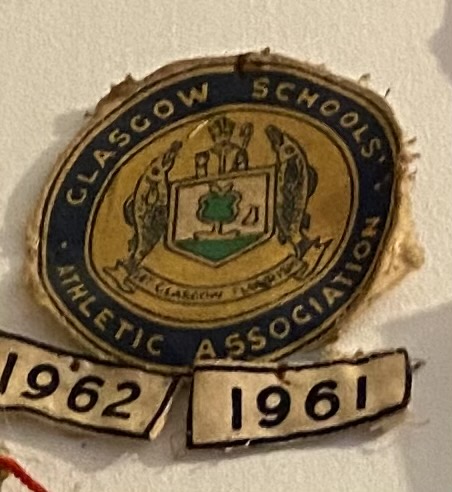 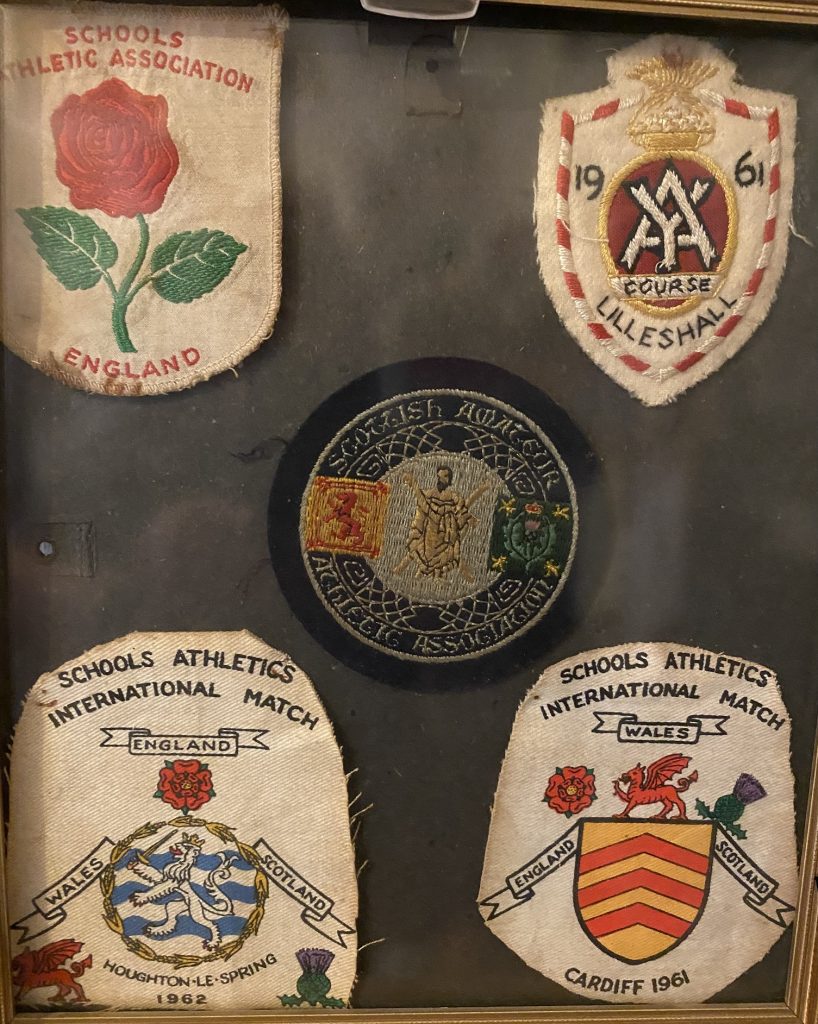 And schools brings us to the well known Thistle and Five Star Awards.   The Five Star came first as far as I am aware and were to encourage young athletes to try new events and in return they would receive an award.   Everyone who entered won an award – all of varying colours.   To win one, the young athlete had to do three events which had to be a comnination of track and field.   There were points awarded for every likely performance and the higher the points total for the events chosen there were awards graded from 5 star to one star.   The tables were also graded for different age groups.   A fair bit of clerical work for the organiser for the athlete could do as many events as he/she wanted.  Some walked away with half a dozen golds or any mix of the colours.  You will note from the patches below that the ages went down to Under 10: in Scotland that was never the case.  The Five Star patches looked like this: 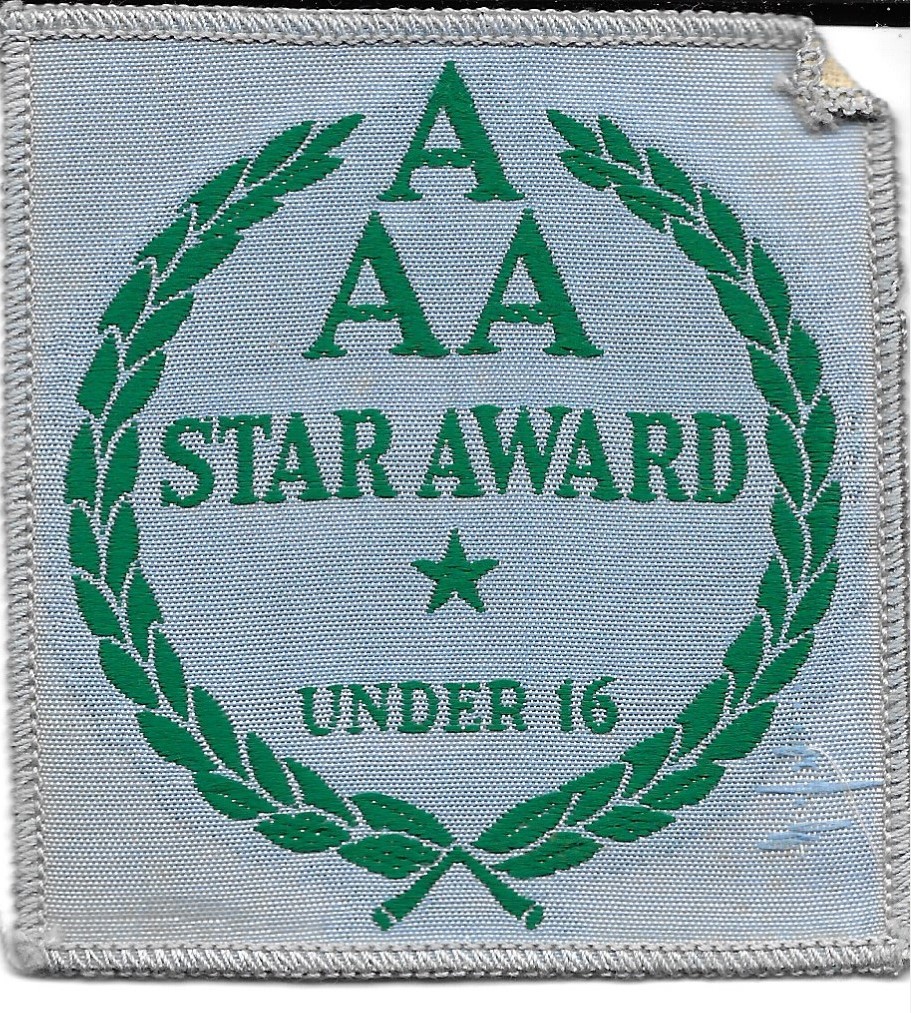 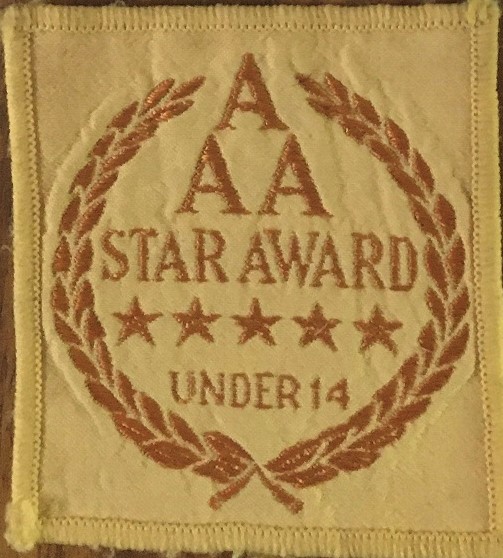 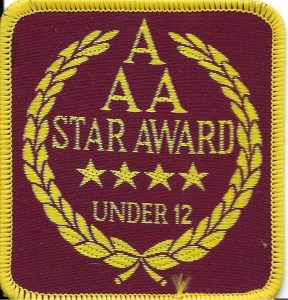 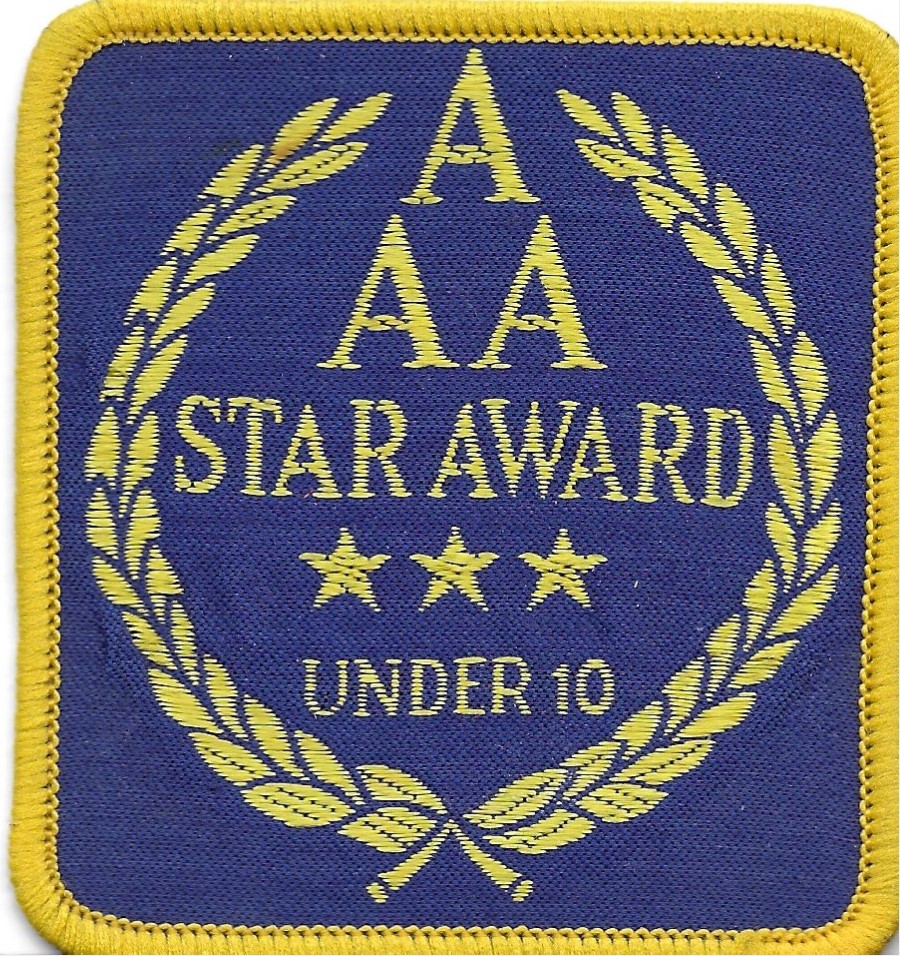 In Scotland, to gain a Thistle Award the athlete had to do three events of which one was a field event and one was a track event and the third could be either.   The most common combinations often included one or more of 100m, long jump and shot putt.   The awards were gold, silver and bronze and for those who failed to get any of these, there was a blue award.   Getting a blue was always possible.    There were of course certificates to accompany the badges and patches – to see some of them, go   here  . 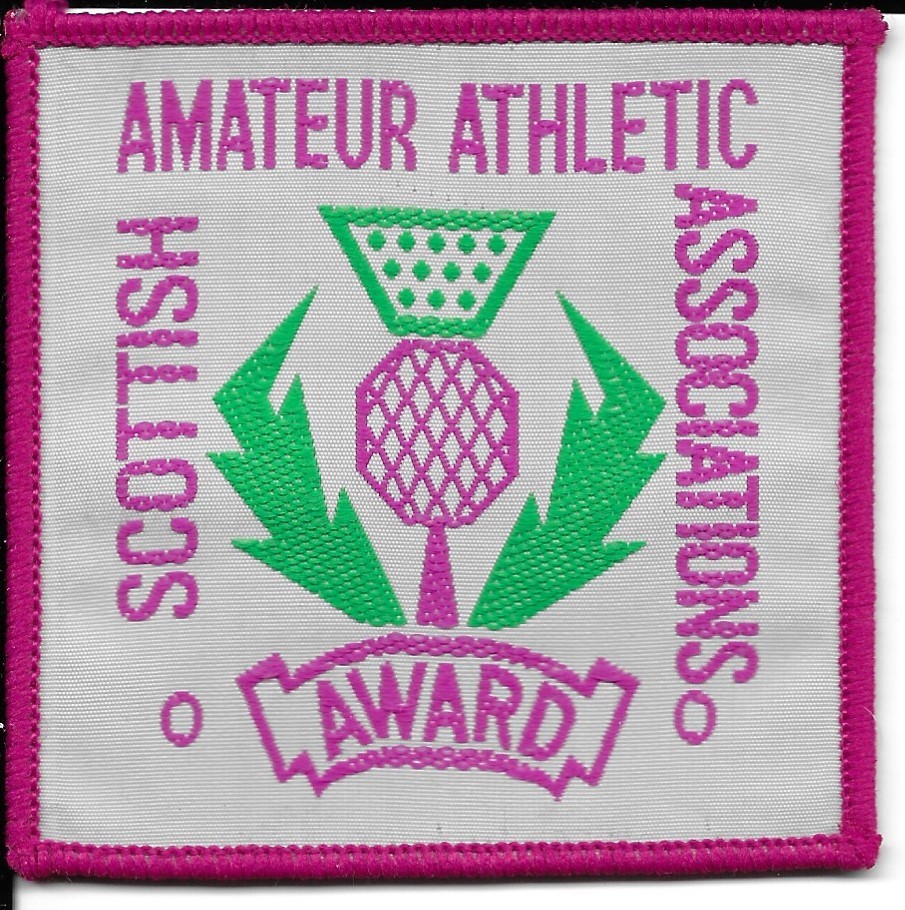 Hugh Barrow’s collection included the following, not to be confused with the Thistle Awards in any way.   These were standard awards for performances achieved at National Championship events.   Not nearly as well made as the Thistle awards, they were harder to get and the top awards were greatly prized and for us lesser mortals, any standard award was an achievement.   You will have seen among Colin’s collection that there were also District standards but here we have Hugh’s standards (or a selection thereof) and then some others. 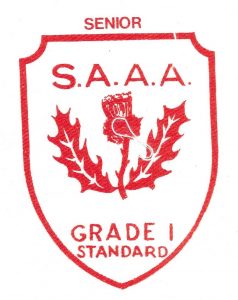 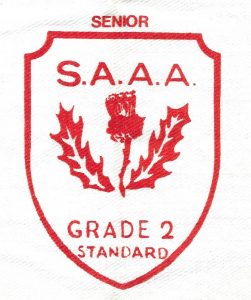 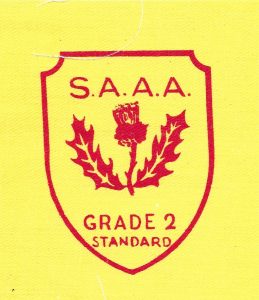 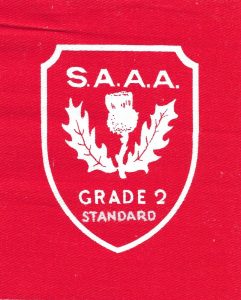 Different colours for different years, awards for different age groups too.   One of the few times that I ever heard David Bowman of Clydesdale Harriers ever get angry was when he spoke of Tommy Rewcastle oif Plebeian Harriers finishing the marathon and having the standard gun fired almost in his face as he was yards from the finishing line after running the marathon.   He missed his standard badge because somebody decided he would, was the common feeling among the other competitors that day.   The standard mattered.

However, it was not only in Britain or Scotland where badges and patches were awarded or used as club markers – note this one from Canada – be we won’t go furth of Britain ….. 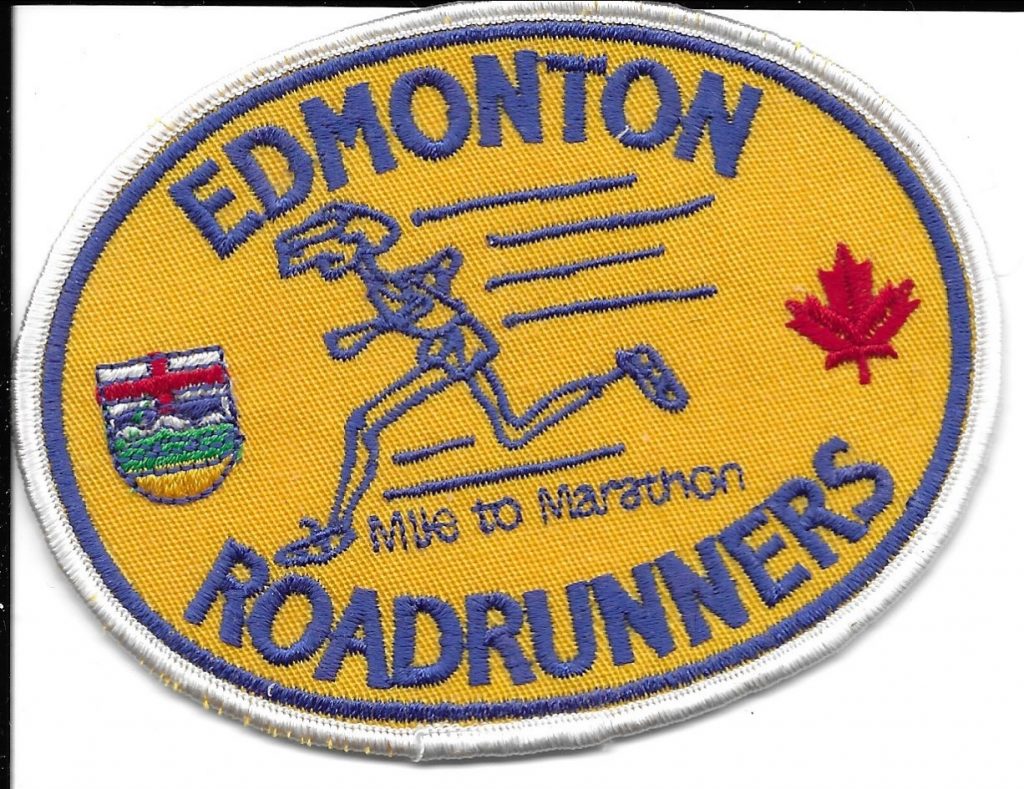