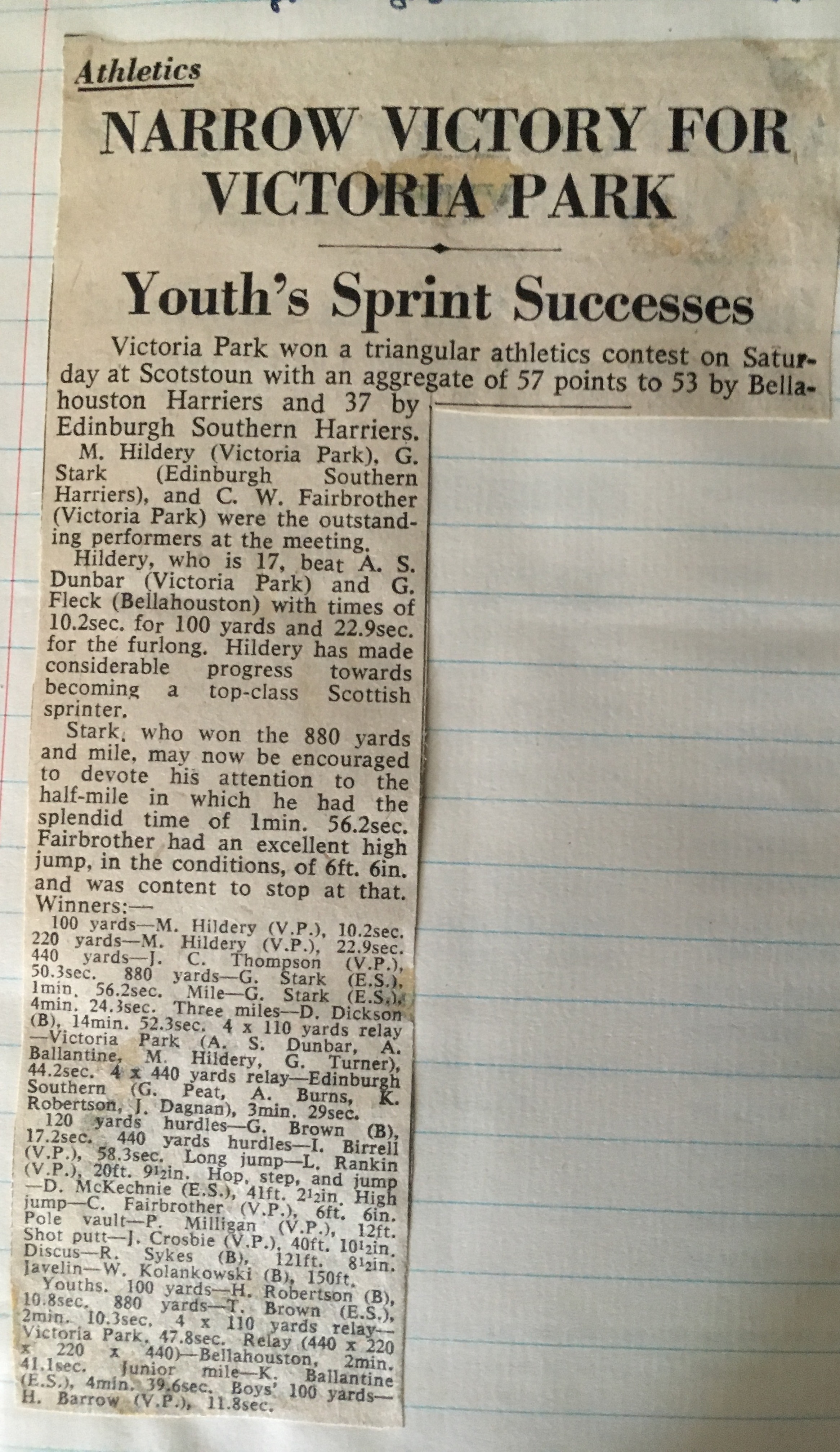 The inter-clubs were in the main  organised by the clubs concerned and were often annual fixtures – for instance Clydesdale Harriers always had track matches with Vale of Leven, Greenock Glenpark Harriers and Springburn Harriers with others (Shettleston, Victoria Park, Maryhill, etc) being less frequent.   They should not be looked back on in a patronising fashion – they were far from being easy, wee social occasions – although there was always a social element present.    I have printed the results of the first one here had 16 events, including almost all field events, and others had eighteen events on the programme.   Bear in mind that they required all the hurdles on the track for both hurdles races, the uprights and other kit for the high jump and pole vault plus all the throwing equipment to be present and in a good condition and that track events usually went up to 6 miles and had both relays..

They were not contested solely by B string or C string athletes – note some of the names below – SAAA champions such as Ming Campbell, Joe Connolly, Tom McNab, Peter Milligan, Alan Dunbar, Mike Hildrey and so on all appeared in them.   Arranged before the season started, these matches were often written in to the competition before the season began.

This is just a sampling of the fixtures – those from the East Coast are not here, nor are many of the local meetings in the counties around Glasgow such as Dunbartonshire, Lanarkshire, Renfrewshire or Ayrshire.   Not all results have been printed.   If you want any particular set added, it can be done.   Here we go.

Friday, 29th April:   Tomorrow there is a triangular contest at Barrachnie where Shettleston Harriers will have  Seaforth AC and Garscube Harriers as visitors.   Shettleston should prove too strong for both opponents as they have a much stronger team than that which lost to Bellahouston.”

Monday, 1st May:  Shettleston Harriers won a triangular match against Seaforth AC and Garscube Harriers with an aggregate of 89 points to 66 for Seaforth and 36 for Garscube.   J Meggat and T McNab (Shettleston) had doubles in the 100 yards and 220 yards  and  the long jump and shot putt  respectively.

[There were also races for Youths and Boys]

Wednesday, 3rd May: “Bellahouston Harriers beat Jordanhill Training College by 108 points to 84 last night at Corkerhill.   G Brown (Bellahouston) won the 120 yards hurdles and 440 yards hurdles in 17.3 sec and 60 sec respectively.  Another notable performance was achieved by J Connolly (Bellahouston) who won the three miles in 14 min 13.5 sec, 2 sec outside his own personal best for the distance.”

Friday, May 6th:  “Shettleston Harriers will meet Edinburgh University in what should be a very closely contested men’s inter-club match at Barrachnie.

Glasgow University should give a good account of themselves in a three cornered contest at St Andrews against the local students and Queen’s University, Belfast.    The Scottish Universities B Teams with Clydesdale Harriers will have a match at Westerlands.”

Monday, 9th May at Barrachnie:   “Edinburgh University beat Shettleston Harriers by 78 points to 64 at Barrachnie.   T McNab and RA Findlay, both of Shettleston, won two events.   McNab won the long jump and the hop, step and jump and Findlay the shot putt and javelin.   The students won 10 of the 15 events.”

Wednesday, May 18th:   Glasgow University narrowly won an inter-club contest at Westerlands last night with an aggregate of 79 points.   Victoria Park AAC were runners up with 74, Jordanhill Training College third with 52, and Shettleston Harriers fourth, 38.   CW Fairbrother (Victoria Park) the British high jump champion, was one of the outstanding competitors with a jump of 6′ 7″, only half an inch outside the Scottish record.   G McLaughlan (Victoria Park) equalled the 120 yards native hurdles record with a time of 15.3 sec.

Friday, 27th May:   “Victoria Park AAC beat Glasgow University by 58 points to 40 last night at Westerlands.   I Binnie (Victoria Park AAC), holder of records from 7 to 12 miles, took part after a long absence from the track.   He won the two miles comfortably in 9 min 55.5 sec in heavy rain.”

[June had most club championships, some county championships and a few open meetings – the big one was the SAAA Championships at the end of the month and the inter-clubs had been well used by most of the big names to get themselves in shape, often by running distances other than their usual but also some hard racing away in relatively private conditions against other top competitors. There were never many two or three club fixtures in June.    July was the ‘holiday month’ with all the various Fair Holidays – several had the first fortnight as their annual break, others had the second two weeks and and very few clubs could field a complete team at that time of year.  If you add in the AAA’s Championships with the best athletes competing there and having to prepare on their own for the week or two beforehand, the problem was exacerbated.   So June and July were relatively free of the inter-club fixture although there were a few.]

Friday, 12th August:   “Shettleston have a contest against Edinburgh Southern Harriers tomorrow at Scotstoun.   Shettleston, who have already beaten Victoria Park and Glasgow University, out to be more than a match for Edinburgh Southern.   The Glasgow club will be without GE Everett, who will be competing at the British Games at White City, London, but Southern will be more heavily handicapped through the absence of RB Cockburn in the sprints, KD Ballantyne in the middle distance events and D McKechnie in the jumps.   These three are included in the Scottish side who are due to compete in the Belfast Highland Games.”

Monday, August 15th:   “Edinburgh Southern Harriers beat Shettleston Harriers by the narrow margin of four points (95 – 91) in their inter-club event at Scotstoun.   Each club won 9 of the 18 events.   K Skilder was a triple winner for Edinburgh Southern in the shot putt, discus and pole vault.   F Davidson (Edinburgh Southern) and R Stephen (Shettleston) each won two events.   Both relay events were won by Shettleston, W Stockton, the Scottish quarter mile champion, paving the way for his club’s win in the 4 x 440 yards.”