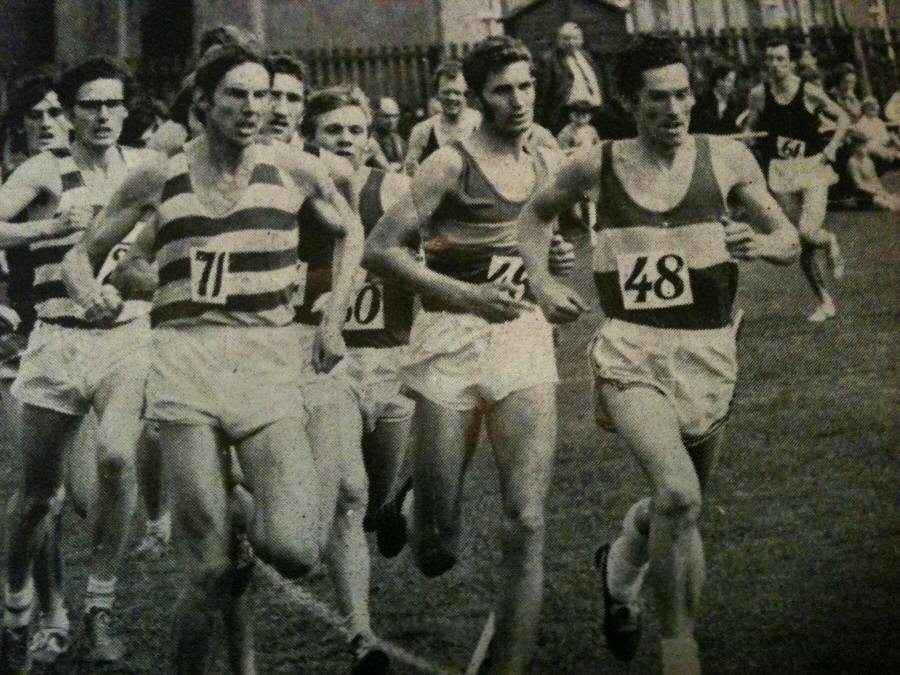 Inter-club rivalry and competition did not stop with Tuesday or Thursday night matches but continued at Sports Meetings and some Highland Games during the summer season.   Many of these occasions were enhanced by the inclusion of a two mile team race and one – or at times two – relays at the end of the meeting.   Of course, athletes travelling to such meetings, would also enter individual races to maximise their pleasure or competition experience on the day.   It was not unusual to see a runner finish the team race and immediately change the race number for the one he would wear in the up-coming mile handicap; it was unusual to see – as we saw Gordon Eadie of Cambuslang do once – a runner win a 14 mile road race and then step on to the track for the two mile team event!   The sprinters in the 4 x 100 relay would as a matter of course also enter two of the 100 yards, 220 yards or 440 yards.   I remember at Cowal the relay came before the 220 yards handicap and since so few turned up for the furlong, it was decided to have a straight final.   After the decision was taken and the announcement made, the sprinters trooped across from the relay and it was discovered that there were almost two dozen runners for the straight final!   They went ahead with it and it made for a most interesting race.   But the thing is that the top men turned out in these races and with, say, Motherwell YMCA, Victoria Park and Shettleston facing each other almost every other week, the head to head racing that helped develop the top men, was the highlight of many a local sports day.

One of the most popular was that held at Babcock & Wilcox Sports in Renfrew at Moorcroft Park, on the third Saturday in June.  By then the runners were well tuned up having run  in the team race at the Lanarkshire Constabulary Sports at Shawfield on the first Saturday of the month and then as individuals in the Glasgow Police Sports on the second Saturday.   The Glasgow polis did not have a two mile team race at this point.   The track at Moorcroft Park was just good grass – it had no eccentricities (Cowal had a big hole on the inside of the second bend, Gourock had an uphill last bend and finish, and so on) , was easily reached by public transport and there was a trophy (the Empire Exhibition Trophy) for the club with the highest points for the afternoon..   In addition the prizes were of a good standard – eg we once had 54″  x  27″  fireside rugs for being second team.

In 1960 the race was won by Graham Everett in 9:00.2 at a time when he was SAAA Champion and GB Internationalist for the Mile.   To keep the inter-club theme going, Edinburgh Northern Harriers won the Medley Relay in 3:38.8.   1961 was also a close run thing in the team race – Graham Everett again won the two miles from two Bellahouston runners – Joe Connolly was second and Dick Penman was third but Bellahouston won the team race convincingly with 9 points to Shettleston’s 20.   Everett was out again in the medley relay and this time Shettleston won in 3:37.8.   The Empire Exhibition Shield went to a third club – Springburn Harriers who were closely challenged by Bellahouston and Victoria Park.   Nobody won anything unchallenged at Babcock’s.

Having come close in 1961, Victoria Park won the Shield in 1962 and possibly the two miles team race (the exact result is not available) but the Mile Medley Relay went to Larkhall YMCA who won in 3:38.8.   Came 1963 and it was Bellahouston Harriers’s turn to win the Empire Trophy and the match incorporated a match between Renfrew and London which was won by the home team.   The Two Miles was a clean sweep for Motherwell whose first three were Bert McKay (9:08.9), Andy Brown and Alex Brown with the team race being decided on these three places, with Victoria Park second  and Edinburgh Southern Harriers third.   The medley relay this time went to Maryhill Harriers from Dumbarton in second and Clydesdale Harriers in third.

In 1964 Lachie Stewart won the two miles in 9:6.8 while Motherwell again won the team race but the relays were the high point of the meeting.   The medley relay was won by Ayr Seaforth for whom Jim McLatchie, home on holiday from America, ran the first stage but an added attraction was the holding of the two SAAA championship relays over 4 x 100 and 4 x 440 yards.   The former was won by Glasgow University (McGeough, Gibbons, Ewan and Campbell) in 43 seconds, holding off Edinburgh Southern by a yard; and the students from Glasgow also won the long relay (Foster, Wilson, Hodelet and Campbell) in 3:19.1 by five yards.   The inter-club events added a great deal to the sports – coming just a week before the SAAA Championships didn’t hurt either.

Lachie won the race in 1965 in 9:11.6 with Victoria Park taking the team race.   Dumbarton AAC went one better than in 1963 when they won the mile medley relay in 3:42.3.   In 1966 the weather was wet, the ground soggy and times generally slow but Victoria Park again won the Empire Trophy which they had won a year earlier and the race of the afternoon was reported to have been the two miles which was won again by Lachie Stewart in 9:24.8 while Bellahouston defeated Dumbarton to win the medley relay in 3:50.2.   Bellahouston won the relay again in 1967 in 2:31.8 and Lachie Stewart of Vale of Leven won the two miles in 8:58.

The point made at the top of the page – that inter-club competition which was beneficial to the clubs, to the individuals and to the sport in the country was continued throughout the season in a variety of ways.   We can look at some of the other sports and games that included two miles team and relay races on another page.

Inter Clubs at Shawfield and Brockville    Shotts and  Gourock    Cowal