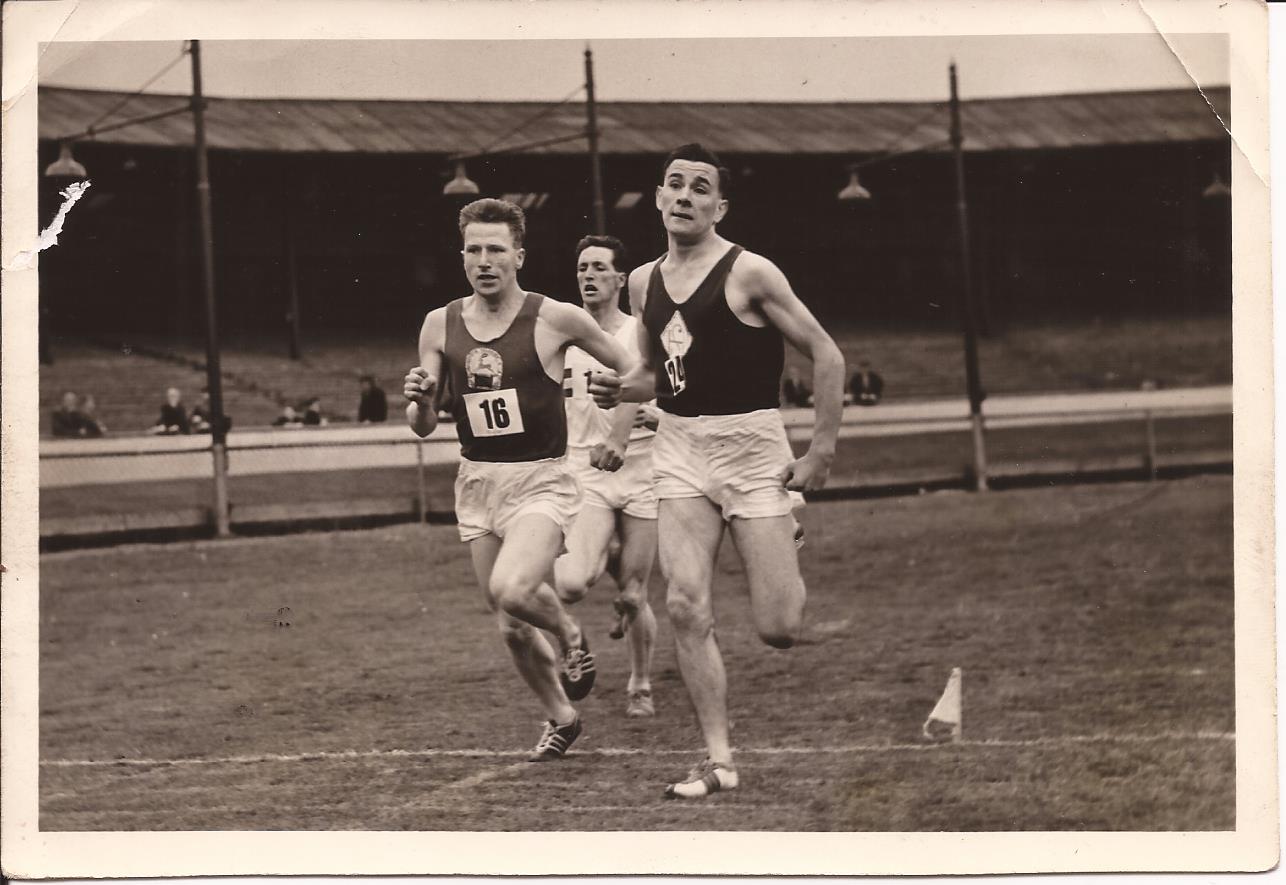 Danny Wilmoth winning at Shawfield in the Lanarkshire Constabulary Sports

There were two or three miles races at other venues but they were often erratic in that they were not on the programme every year.   Shawfield was a fairly good meeting but the three miles was not an ever present – they did have other attractions however which kept the meeting going for some time.   The Falkirk meeting was only held for ten years as far as I can find out and at one time the Strathallan Gathering at Bridge of Allan had a three miles handicap.   It is maybe worth looking at the first two.

The Lanarkshire Constabulary Sports were held at Shawfield Stadium on the first Saturday in June.   Shawfield was the home of Clyde Football Club and was also famous for the greyhound racing that took place on the track round the outside of the football pitch.  This kept the spectators well away from the action and the size of the stadium meant that what would have been a ‘crowd’ at another Games meeting, appeared to be a sparse gathering.   The runners had to change under the stand, cross the dog track and then they were on the grass track which was marked out on the football pitch.   It was obviously a bit short of the 440 yards distance, but that was par for the course as far as summer tracks were concerned.   The sports organised by Clyde FC were originally professional sports and remained so for a big chunk of the amateur era, becoming amateur only in the second decade of the 20th century.   They ceased to be in the 30’s but the Lanarkshire Constabulary Sports took place there one week before the Glasgow Police Sports at Ibrox.    The programme changed from time to time at Shawfield and the three miles (not the more usual two) was a team race but the emphasis was on the individual event and lots of the top men took part in it.

We all enjoyed running there but it was not one of the major venues of the summer.

There was no team race at all in 1960 where the real interest was generated by Crawford Fairbrother broke the Scottish native record of 6′ 7 1/2″ for the high jump getting over 6’8″ on his second attempt.   The invitation quarter mile was won by WillieBlack of Maryhill and the open Mile by Mike Ryan of St Modan’s.   Nor was there one in 1961 – but 1962 say a good programme of events which included a three miles race.   The report on the race read: “AP Brown (Motherwell) at half way in the three miles never looked like catching his team mate R McKay but his recovery over the final half mile was so remarkable that he beat McKay by 30 yards in the good time of 14 min 08.5 sec. ”     There was a team race and Motherwell won it with 9 points.

The meeting in 1963 was held on June 3rd and the three miles was described in the results as “Three mile team race.   Motherwell YMCA(J Linaker 1, I McCafferty 2, AH Brown 3) 6 pts.   Linaker’s winning time was 14 min 23.8 sec.”    Away from the team race there were several interesting races.   The meeting most years had an invitation three quarter mile race and this time the invitees included Graham Everett (Shettleston), and Hugh Barrow (Victoria Park).   Shortly after the start there was a collision and Hugh Barrow fell to the track and was out of the race.   He tried to make up the ground but too much ground had been lost.    Everett won in 3:07.8 from Craig Douglas of Teviotdale with Graham Peters of Victoria Park third.   These meetings organised by the football clubs almost always had a five a side football tournament and Rangers, Third Lanark, Celtic, Clyde, Hamilton and Motherwell were the teams with Motherwell beating Rangers 1-0 in the final.

Motherwell again won the three miles team race on 13th June, 1964, although Lachie Stewart won the race from Bert McKay in 14:18 after sprinting away with 200 yards to go.   Hugh Baillie of Bellahouston was favourite to win the invitation handicap 300 yards but was beaten by a yard and a half by Graeme Grant who was running from 14 yards, Grant following this up with second in the mile to Eddie Knox of Springburn.  The featured three quarters of a mile invitation was won by Wilson of Teviotdale from Jim Johnstone (Monkland) and Graham Everett in 3:06.1.

Lachie again won the race in 1965, this time from Ian McCafferty (Motherwell) and Albert Smith (Victoria Park) in 14:06.6.   This was still the only team race in the programme, it was an open race by now and the meeting in 1965 really emphasised the five a side competition pointing out that the crowd was larger than usual and that it was ‘more raucous’ when the football came on.   Graeme Grant won the three quarter mile from Bill Ewing (Aberdeen University) and Craig Douglas of Teviotdale. 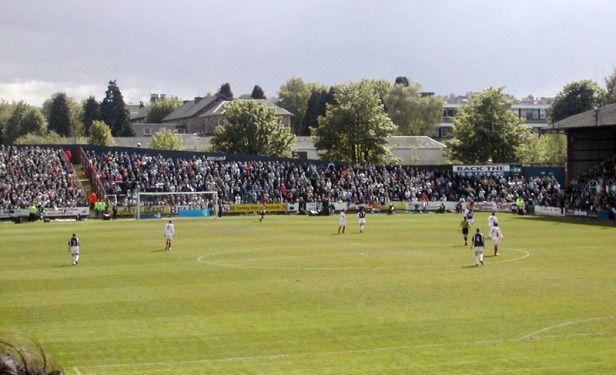 Brockville during a football match: you can see how tight the bends would be for four or five lanes to be inside the goal posts for an athletic track.   Lovely running surface though: definitely a class above the usual.

We can pick up on the Sports at Falkirk FC’s ground (Brockville Park) on 25th July 1959.   The meeting was organised jointly by Falkirk Victoria Harriers and the football club and was – unfortunately – on the same date as Gourock Highland Games.    The meeting included a five-a-side football tournament which meant the goal posts had to be in place, which meant that the track had to be on the infield with enough space inside the goal posts for several runners to run side by side without touching wood.   It was one of the smallest tracks of the summer: I only ran there once and on that afternoon we all did personal best times, only to be disappointed when we were told that we had run one lap short.   In 1959 Andy Brown of Motherwell won the two mile team race in 9:13.8, a good time on a track with short straights and tight bends.   Two Victoria Park runners – John McLaren and Bobby Calderwood – were second and third and their club team won with 9 points.   St Mirren beat Celtic in the final of the football by 3 goals and 1 corner to 3 goals, the competing clubs being Rangers, Celtic, St Mirren, Falkirk, Stenhousemuir, East Stirlingshire, Hearts and Motherwell.    There was no men’s relay but in the women’s 4 x half lap, Broxburn beat Ardeer and Clydesdale. 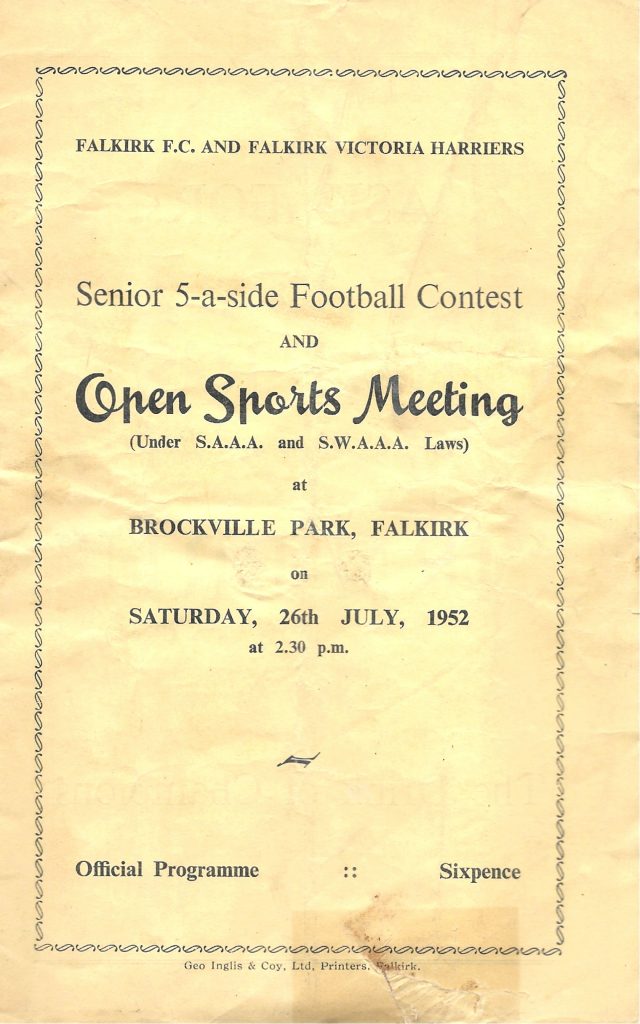 A year later, on 30th July 1960, the Scottish three mile record holder, Andy Brown, faced up against the SAAA three mile champion, Eddie Sinclair of Springburn.   Brown won by 50 yards in 9:18.0 with Sinclair second and club mate Tom O’Reilly third.   Sinclair led home the winning team with Springburn having 12 points.   There was a medley relay that afternoon which was won, surprisingly, by Larbert Youth Club from Edinburgh Northern Harriers and Ayr Seaforth in 2 min 34 seconds (the distances were 2 laps, 2 x half lap and 1 lap).

In 1961, George Brownlie of Edinburgh Southern Harriers was unplaced in the junior half-mile but stepped up for the team in the two miles team race and won in 9:35.2.  R McFall of ESH was second and John McLaren third.   Southern won the team contest with 13 points.   Three years, three different clubs winning the race – competition was good.   The afternoon was marred by three players being ordered off in the five-a-side – Crerand of Celtic for arguing with the referee, and then Jackson (Celtic) and Lowrie (Falkirk) for coming to blows.   To cap it all, Provan (Rangers) and Roberts (Motherwell) had their names taken.   Not a good advertisement for football.   There was no men’s relay in 1961.

On 28th July 1962  Bert McKay (Motherwell) won from ‘two more fancied competitors’, John Linaker (Pitreavie) and Andy Brown, in 8 min 14.2.   The report added, maybe unnecessarily, that the distance was undoubtedly sort for the world record was 8 min 32 sec!    Motherwell won the team race.  It was a sparkling meeting that year with Ming Campbell winning the 100 from Ronnie Whitelock (VPAAC) and G Mclachlan (St Modan’s) in 9.9 seconds.   Willie Morrison (Larkhall) won the handicap mile from Mike Ryan (St Modan’s) and AC Gibson of Hamilton and David Cairns (Springburn( won the high jump.  There was an invitation medley relay again and it was won by Edinburgh AC from Larbert and Clydesdale in 2 min 24.2 sec.

27th July 1963 saw another win for the Motherwell YMCA team but this time their leading runner was JH Linaker – the same John Linaker who had been second the previous year but who was now working in Motherwell – from Andy Brown in a sprint finish, with Ian McCafferty third.   Motherwell of course won the team contest with 6 points.   Although it was not a team contest, Teviotdale runners held the first three places in the handicap half-mile – JR Wilson (12 yards) first, Craig Douglas (scratch) second and P Roden (10 yards) third.   Hugh Barrow (VPAAC) gave Dick Wedlock 42 yards in the junior half mile and it was just too much with Wedlock winning in 1:56 before also winning the mile.   The programme was much reduced and there were no relays other than the local Under 15 race.

“The Falkirk Football Club – Falkirk Victoria Harriers joint meeting at Brockville Park suffered from the counter attraction of the Gourock meeting and entries were down for the track events”    said the ‘Glasgow Herald’ of 27th July 1964.    There were only five track events for the men and four for the women.  There were no relays for either sex or for any age group.   The only club competition was the two miles team race where JR Wilson (Teviotdale Harriers) won in 9:31.6 from Tom Brown of St Modan’s.   Teviotdale won the team race.

Les Piggot, Brian Scobie, Lachie Stewart, Jim Johnston, Dick Hodelet and the sprinters in the relay teams were all competing at Gourock that day and to top it all David Stevenson set a British record in the pole vault.  It was to be the Falkirk meeting’s last fling.   It disappeared from the calendar.   It had been a good meeting but the competition from others was great with international meetings taking place most years on that weekend and Gourock was taking the highland games/local sports custom more and more.  Falkirk Victoria Harriers are to be thanked however for their effort in putting on this attractive fixture for so long.   Below is the list of officials from the Falkirk Sports programme of 1952 with many well-known names in there – Dunky Wright of course, Joe Walker, Alex Nangle (one of two handicappers at the time along with W McNeillie), Fred Evans the doyen of all the starters, David Corbett of Bellahouston, and many others.   It is not stretching a point in any way to note that they all had the competitors interests at heart. 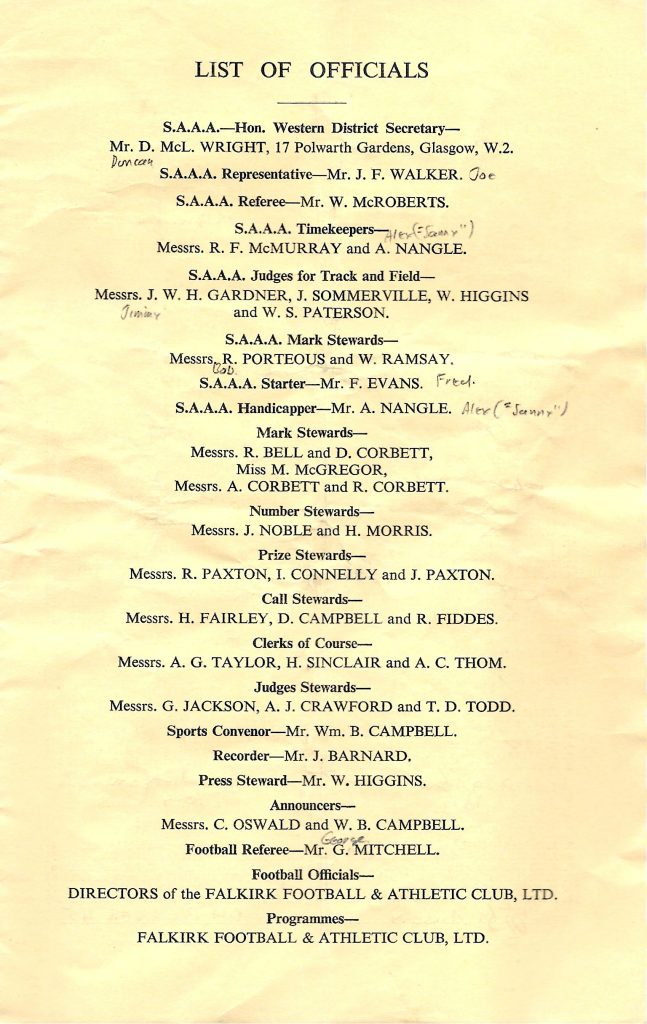