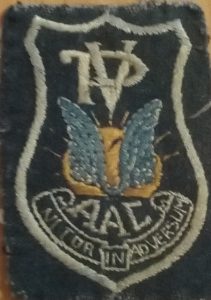 Most clubs at one time or another have a club magazine to record the club’s activities.   Some only hast for a few months others for many years.   It is easy enough in 2020 to produce a professional looking job with colour print and even colour illustrations using the by-now ubiquitous laptop computer.   Most clubs have a website with most – if not all – the bells and whistles which is kept up to date on a weekly, if not daily basis.   Before the advent of the computer however, it was a fairly strenuous job:  first the material had to be typed out, in the 1960’s, 70’s and 80’s probably on a ‘skin’ to use on a rotary printer.   Then the skin had to be fitted to the machine – not always a straightforward job of simply fitting the ‘skin’ holes on to the machine/   The machine had to be equipped with enough ink to do the job in hand.   Then the magazine had to be hand cranked to produce the finished item.   By ‘hand cranked’ I mean the handle had to be turned once for each sheet of the magazine.   ie for 100 copies of a 15 page magazine, there had to be 1500 turns of the handle!   You also had to be sure that the back of a page was the same way up as the front, and on occasion a page stuck and had to be redone after the rogue sheet had been removed.  It took a degree of dedication to produce a club magazine.   So when I say that the 1962 issue that Alistair Ballantyne turned out had 48 pages …   Oh yes, remember that each of the 100 copies had to be ‘bound’ by a stapler, usually 2 staples per issue.   Then the nagging wee question was, was there enough paper?

We have a selection of pages from the 1962 magazine – some  were just too faint to be easily read, there were pages with drawings which had not turned out too well and some articles were funny at the time.   What we have are items of club news (the first club man to run a marathon), articles by professional journalists (Alan Dunbar and Allan Heron) and best club performances.    We also have seven of Colin Young’s magazines from the 1970’s – again some of the print is quite faint but the content is worth reading.     But first is the 1962 issue – it’s a good’un!