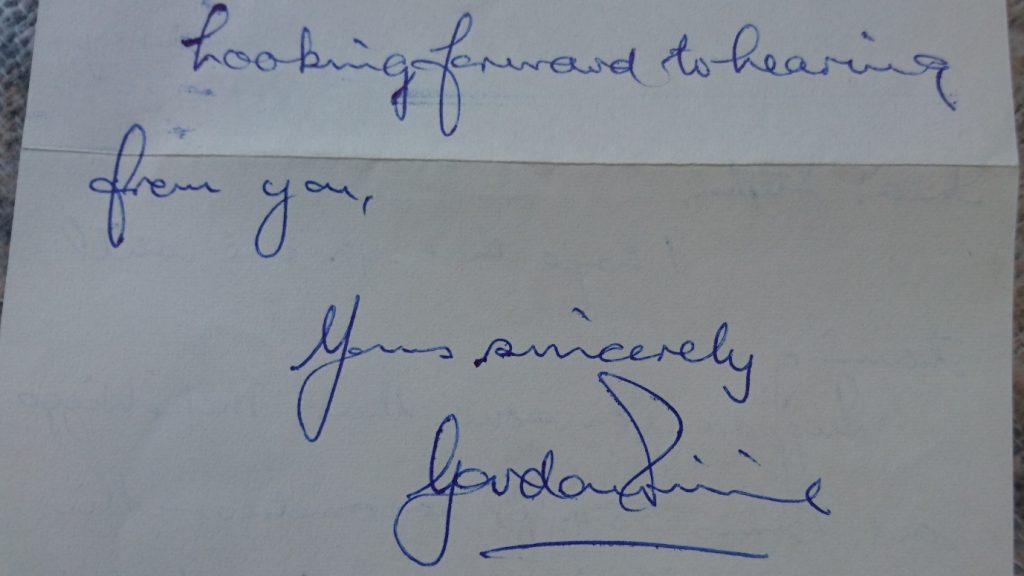 Between October 1954 and 1963, Aberdeen AAC’s Stephen Taylor (usually called Steve), received letters from Gordon Pirie, the great British international distance runner. Despite living mainly in Surrey, Gordon gave Steve coaching advice and suggestions for training sessions. During 1960-1962, Steve was second in the Scottish Mile Championship, twice won the Scottish 3 Miles title and ran for Scotland three times in the International Cross-Country Championship and several times on the track. Steve frequently gave a great deal of credit to Gordon Pirie for helping him to become a much better athlete, although it is fair to say that he did not always continue trying some of the hardest work-outs that Gordon suggested – and ignored his advice never to train with Alastair Wood!

SLH remained Gordon’s club for many years – he was a very good cross-country runner, winning the English National championships three times in succession, from 1953 to 1955 (when SLH also won the team title).

During his illustrious career, Gordon Pirie (who trained extremely hard, including heavy mileage) represented England in the 1953 International XC and later that year won the very first Emsley Carr Mile (see youtube). Then in 1955 he won the BBC Sports Personality of the Year award. During that year he had beaten Emil Zátopek, the triple gold medallist in distance running at the 1952 Olympics.

Gordon’s first letter, which was replying to a tentative request for advice from 16-year-old Steve, was sent on 21st October 1954. It is worth quoting in full.

Thanks for your letter of 16th August last. Please accept my apologies for this late reply.

My ideas on your training are as follows:

To put these ideas into a training schedule, I suggest that you run between 30-60 mins. The first (15 to 20) mins must be steady relaxed running in complete tracksuit. You must be nice and warm when you finish this. Then, the next 15-20 mins, run fast sprints for your own enjoyment, over about 50 yards to 300 yards. Jog between – about 400 yards slowly. Go at this as you feel. If you feel as mad as a March hare, run them at a terrific sprint! In not, just fast. You should do about 6 or 8 of these in this time. Then the last few minutes (10-15) run as at first in complete track suit, just a steady pace for a good sweat. Afterwards do your P.T. (Physical Training exercises) if you feel like it. Run only 3 or 4 days a week like this. Any other days just jog only 20 mins in tracksuit if you feel like training.

Try this out and see how you go,

(WELL, what a thrill it must have been for Steve to receive such a note from his hero! Gordon comes across as polite, sensible and helpful, without a hint of “superiority” and condescension. Nowadays, his advice to a young runner still sounds wise.)

The next letter I have chosen is from 15th February 1955.

Thanks for your letter. The races you run are pretty stiff so don’t say “only 5th”. That’s pretty good! Just keep plugging on and you will find that the results will follow. The longer it takes, the more satisfaction you will get when you do win.

This team packing is really a bad thing. The best way for a team to win is to have every member run his best. This means that they do not necessarily run in together. No two runners are the same. No, the best way to do your best is for you all to try your hardest in training and in racing. This will give you the best results, I can assure you.

As for your feeling exhausted after one race and not the other. The weather (barometric pressure, temperature and humidity), whether you slept well beforehand, how much you warmed up and trained the week before, would make all the difference.

If you keep a diary of your training with every detail (did I tell you in my other letter?) then you can check back and see whether there was any difference in the training you did and the way you felt. Otherwise it is difficult to give a reason.

Hoping to hear how you get on Saturday week, Yours, Gordon.

Glad to hear from you again and to see that you are doing very well.

You sound a little depressed by your progress but I would say that you are doing excellently. Just look back and think how you have improved over the last four years!

Also I must point out that at the age of 20 I ran 4 mins 14.4 secs for the mile, 14.03 for 3 miles and 29.32 for six, but with plenty of competition and really good tracks to do it on. If you were in London you would do a better time on all these distances.

You must put your head down and keep at it. You only need to run for one and a half hours at the very longest or ten miles every day. I would suggest something like this:

Monday – 7 and a half miles steady run.

Sunday – One and a half hours running.

Don’t do more than this because it isn’t necessary. Just think about becoming stronger.

Think about all the fellows up and down the country who will be training and they are racing you!

Don’t forget to write now and again, Yours, Gordon Pirie.

(Although, at this time, Steve had become a good cross-country runner, who was to run the International for Scotland three times from 1960-1962, his main focus was the track – firstly the Mile and subsequently Three Miles, which was to be his Scottish Champion distance.)

13th January 1960 is date of the next selected letter.

Gordon mentioned: “Now it seems as if you are really blossoming and that the hard work you have been putting in the last few years is to be really justified in the next season.

Basically, the tendon trouble is quite easily cured but take care not to have your shoes too tight at the top of the heel – nor too high and impinging on the Achilles itself. This is a common cause of many Achilles troubles.

I always nick my shoes at each side of the heel so that the top band of my shoes does not dig in. Try it and keep training as before. If your tendons are really sore, get a cobbler to put on quarter inch hard wedge heels under the sole of your training shoes. That should help as well!

(A sixty-page book by Gordon and John Gilbody, which is available free as a word document on the internet, has the marvellous title of ‘Running Fast and Injury Free’. Do seek it out – I did so when I had chronic calf injuries about 13 years ago, and advice in this book has allowed me to continue running as an older veteran.)

Just a brief note. Do NOT train twice a day. Do NOT train with Alastair Wood. Do NOT do too much training and Do Not employ short intervals – nothing less than 70 secs efforts. Always take long interval recoveries between flat out runs over a quarter of a mile. Only two, three or four flat out runs over short distances, say 300 metres or 600 metres.

TAKE A REST on Friday and Monday. Do plenty of gymnastics to strengthen abdomen. Sit-ups and mobility exercises.

Whenever over-tired, rest or just jog a little.

If you want a rough guide for interval training, here are some schedules for you to benefit from.

Yours, Gordon. KEEP ME INFORMED”

“Dear Stephen, Thanks for the letters, I am very bad for leaving you in the air regards training.

I don’t like your training and I am not surprised you have gone down with ‘athlete’s cold’ – that’s what I call it – so many over-trainers suffer from these same symptoms when they train too much or too fast.

Here is my recipe – follow it more or less, making allowances for the weather and your condition.

Wed – As for Monday.

Try this and stop messing about with weights and circuit stuff.

All the best, Yours, Gordon.”

“Dear Stephen, I hope that you are still training.

I suppose you saw that Mike Wiggs did 13 minutes 58.4 seconds for 5000 metres – his first race for one year. We believe that we have become pretty skilled at working training out and I am very anxious to help you to reach greater heights.

Looking forward to hearing from you,

“How are you getting on?

Drop us a line since I have some more ideas on your training. You could quite easily get in the European Champs with the correct training from now.

Look forward to hearing from your, Gordon Pirie.”

After Steve replied, Gordon wrote the following on 11th November 1963.

“Re training, you must firstly have a period of easy training – nothing else.

Do this for four weeks.

Add also Saturday – do a three miles timed run, starting 15.30 (even pace throughout), increasing to 14 minutes.

Let me know how you progress, Yours, Gordon.”