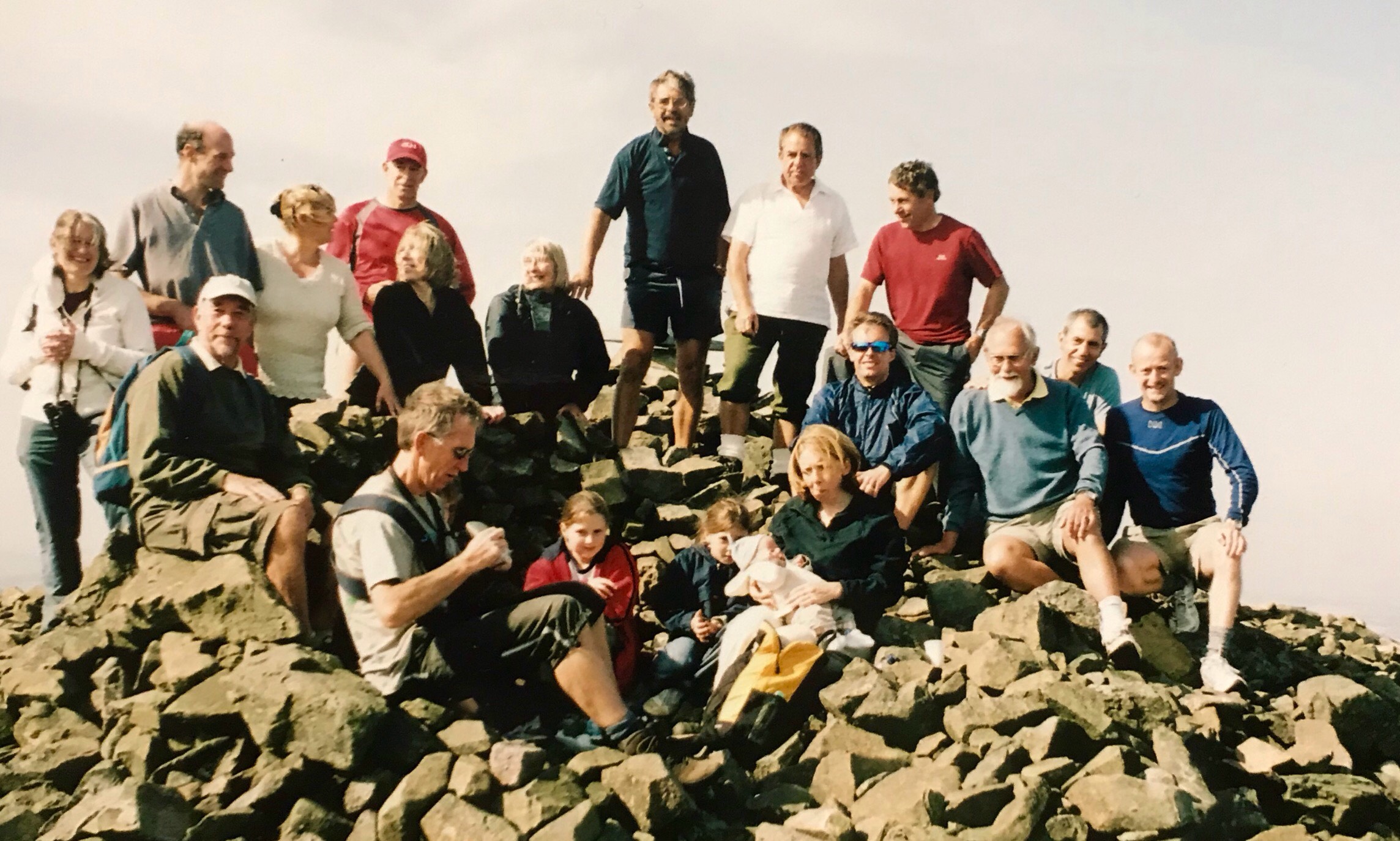 The hill running scene was like any other sport organised by a governing body of an internationally recognised sport in that there were championships where the fastest runners were first, second and third, and subsequently there were races within races to find the fastest Junior athletes and then further along the time line there were awards for the older competitors which again had their own championships as well.   This was despite the fact that there would have been no championships at all – indeed no races at all – were it not for the vast bulk who ran week in, week out with never a thought of a prizes of any colour.   Maybe there would be a handicap or spot prize here and there if the handicapper was kind to you.   There was an ever increasing fixture list which just grew and grew.   Look at these figures:

There was also the fact that with international competition and national championships in mind, the elite had to be catered for as well as the majority of athletes involved.

Denis had a look at this and came up with a novel approach to the championship scene.   A championship where ‘all who will may enter’ regardless of their ability, standard or past record of success or non-success.   He describes the situation thus.

The idea of splitting to 2 calendars was ‘classics’ for the Elite (AND anyone else) but a top level championship… and a general punters Calendar for all the other (less classic) races that are all over the country ( Scotland!) with more ‘local appeal’… of course that could be used for the ‘Alternative Champs’…??!!
So 3 or 4 things…
1. Keep the elites as good as they could be or become…
2. Focus on classics and also rotate to help any erosion concerns
3. Try and attract ‘visiting runners to brilliant events’
4. Allow top level management., and a team to manage a lower key ‘people’s events calendar’ 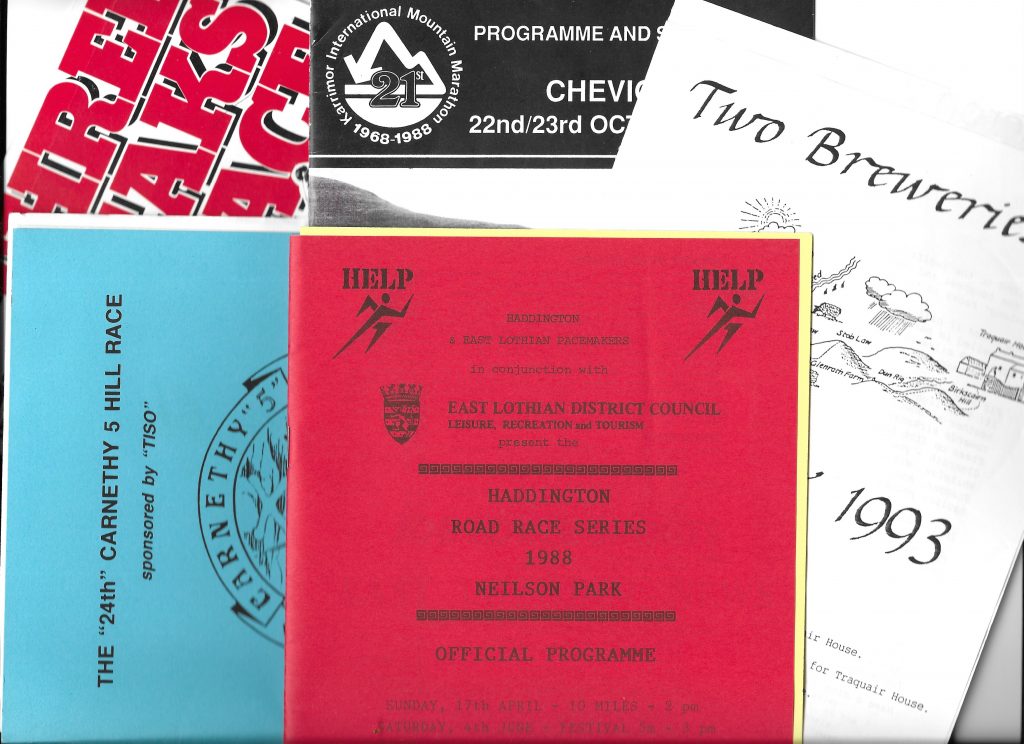 We are lucky to have a fair bit of the correspondence of the first year of this championship and as far as possible the story of that inaugural alternative championship in 1996 will be told using that documentation.   Read on … 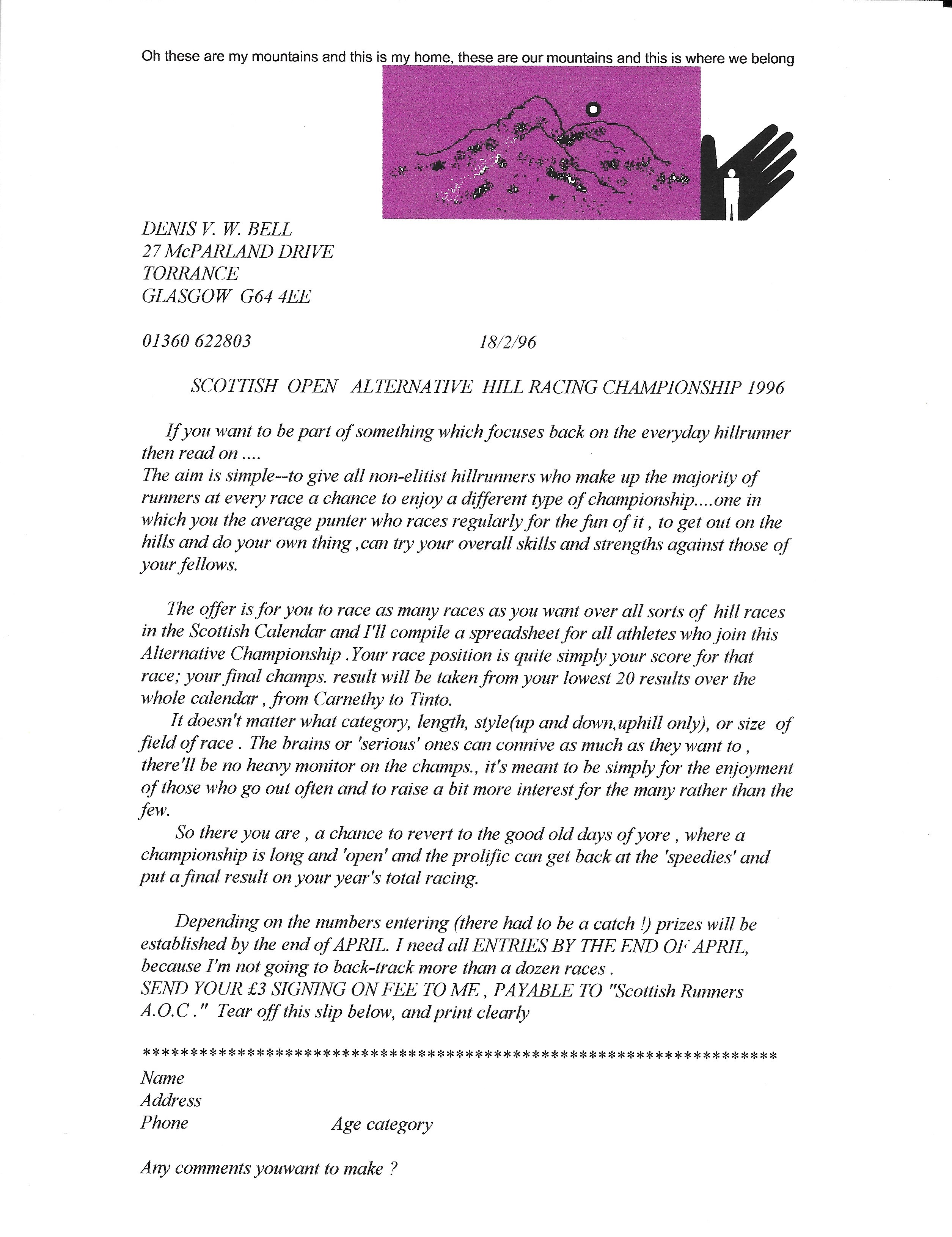 The above letter dates 18th February, 1996,was distributed by Denis to all fellow hill-runners.   The letter and the scheme were self-explanatory. The next steps would be to see if there was a big enough number of participants to make it viable; if there were, to notify the governing body, find someone to do the donkey work of organising and recording the performances – and if it were possible to find a sponsor.   The entries came pouring in to Torrance and that answered the first point.    Many of the replies contained suggestions such as – “How about downhill only races?”   Some from friends and rivals involved scurrilous banter but most complimented him on a great idea.   A small selection below. 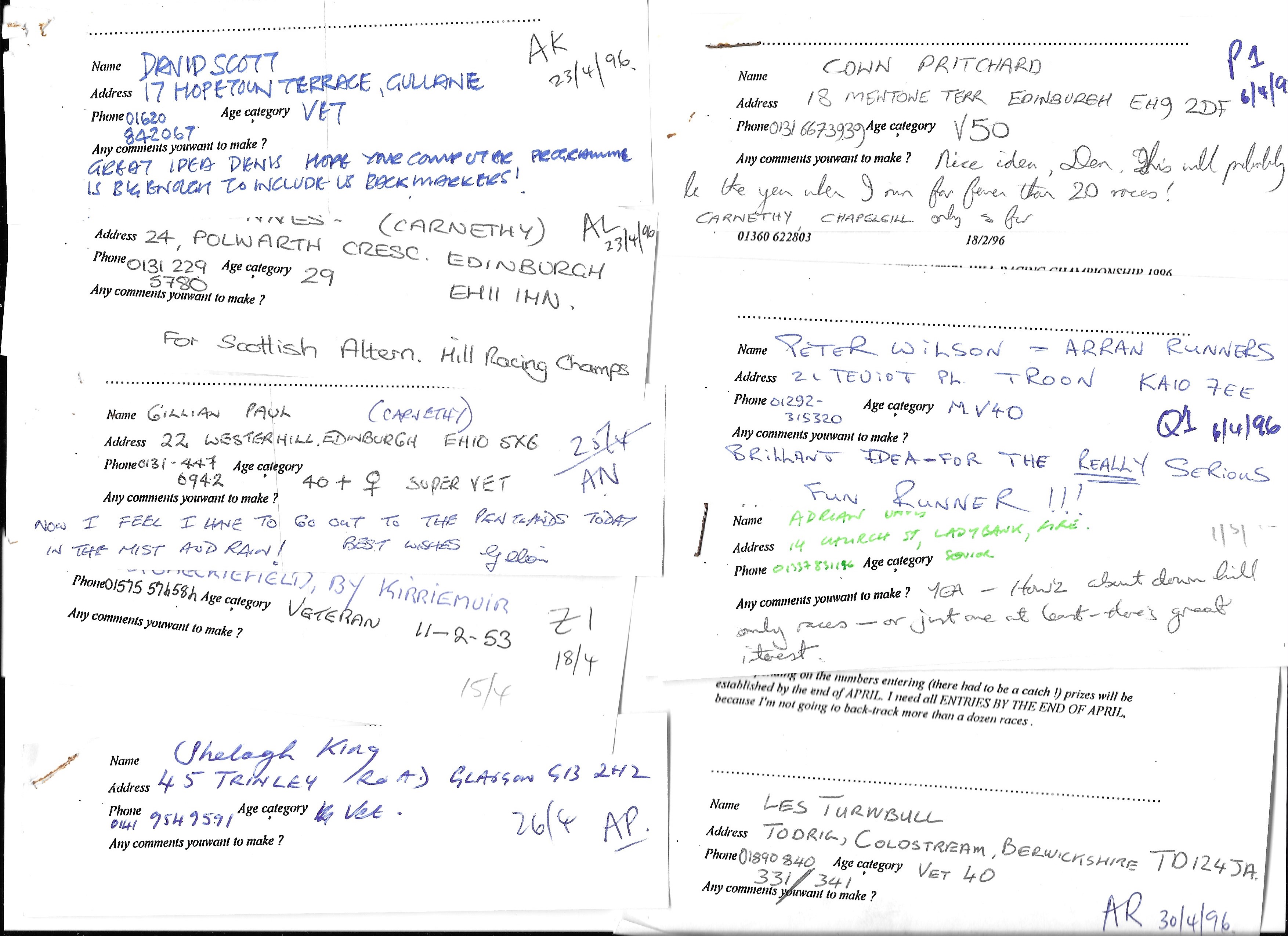 There are in this life many who see a problem and live with it.   Denis is of the school which believes that something can be done by anybody about anything.   This Alternative Championship was his  attempt to put a different slant as an alternative to give credit to runners who maybe never ever got into any top ten results.   I remember sitting at the top of the drop down into Glen Ample in the Stuc a Chroin race where the runners had toiled up from Strathyre and one of the runners from my own club smiled as she passed and said that we supporters were part of the team.   She was one of many who raced on the hills all year, who had to train long hours to be fit enough to do long, medium and short hills, pay her way every time and finish with a smile.   There are many like that on the hill running scene.

There was a short article in ‘The Scottish Hill Runner’ of June 1996 which read:

“As you all know from the last newsletter I’ve been ‘off the wall’ a bit (what’s new?) and started to promote The Alternative Championship, some want to call it the ‘punter’s championship, and I’m pleased to report that to date 41 of you have responded to my offer…. THANKS.   The deadline for entry to my database was 30/4/96, however I’ll still take latecomers for another couple of weeks  … say 17/5/96.   It looks like the biggest problem will be to get results from the race organisers … any RO’s please , please note, I’d be very grateful if you’d help get results to me.

I hope that you’ll all remember the very generous offer from Scottish Hill Runners that they will use some of your funds to sponsor the prizes, although I also know that the intention is to give all participants some kind of commemoration for the season’s races.

SO – RACE YOUR 20 RACES AND YOU’LL FIGURE IN THE RESULTS … IT’S ALL ABOUT ENDEAVOUR AND SUPPORT TO THE HARD WORK THE RACE ORGANISERS PUT IN FOR US.   THEY DESERVE OUR PRESENCE.”

The letter having been sent out, entries received and the deadline extended, it was  decided that all runners, regardless of position, were to receive a certificate.   Note the comment above about a commemoration being donated by the SHR.  Many races at the time awarded a certificate – Ben Nevis, Tom Scott, Mamore Hill, etc – and the appropriate certificate was designed. 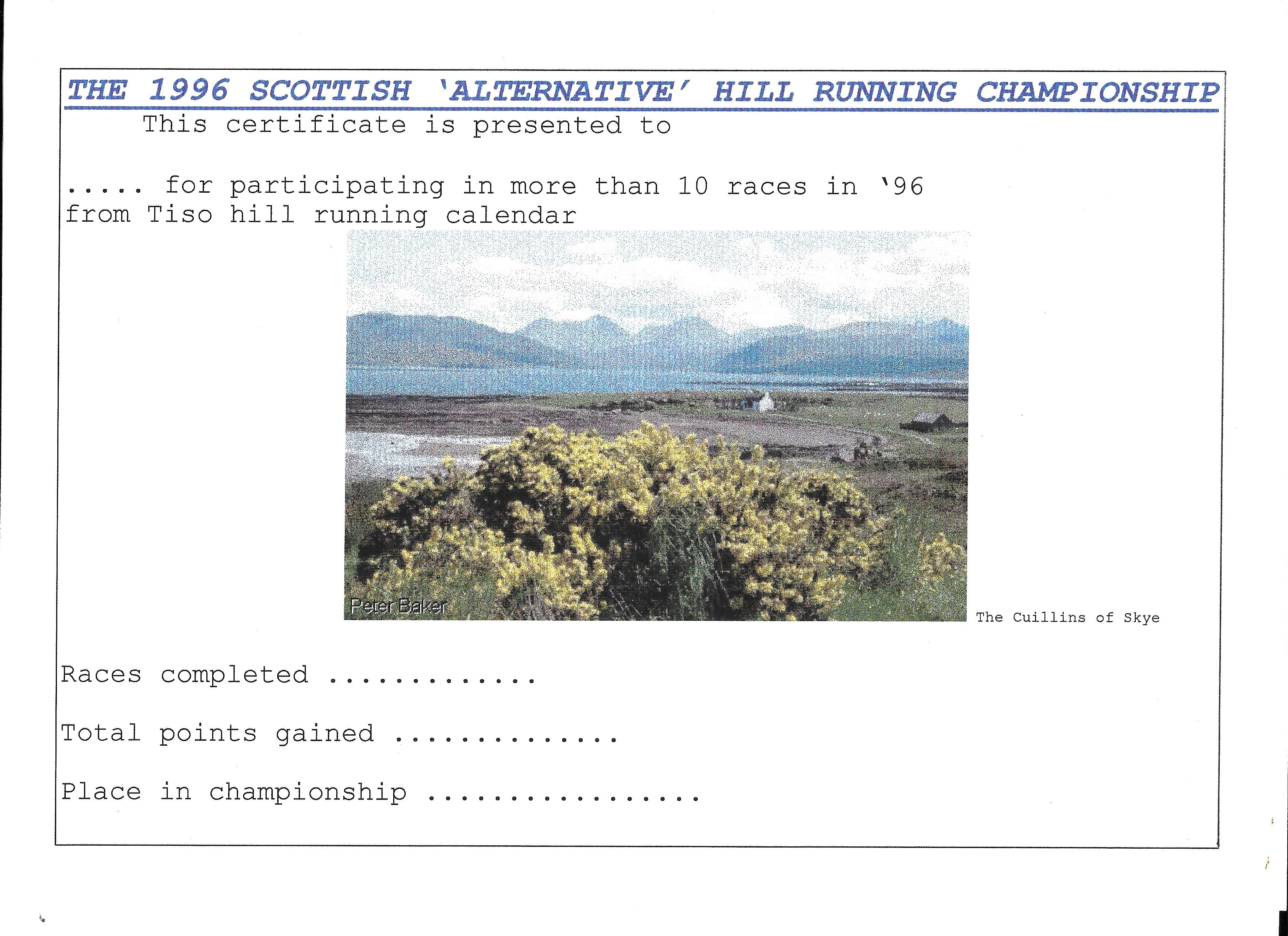 For the other two issues noted above, it was clear right from the start that entries were to him and he had also volunteered to produce a spreadsheet with the results and keep it up to date.   The scheme was ‘up and running’.   All that was required now was the results rom all the races.   In the days of typewritten results (handwritten on occasion) these were not always easy to obtain on the day.   This meant sending out polite requests bbut Denis was up to the job – 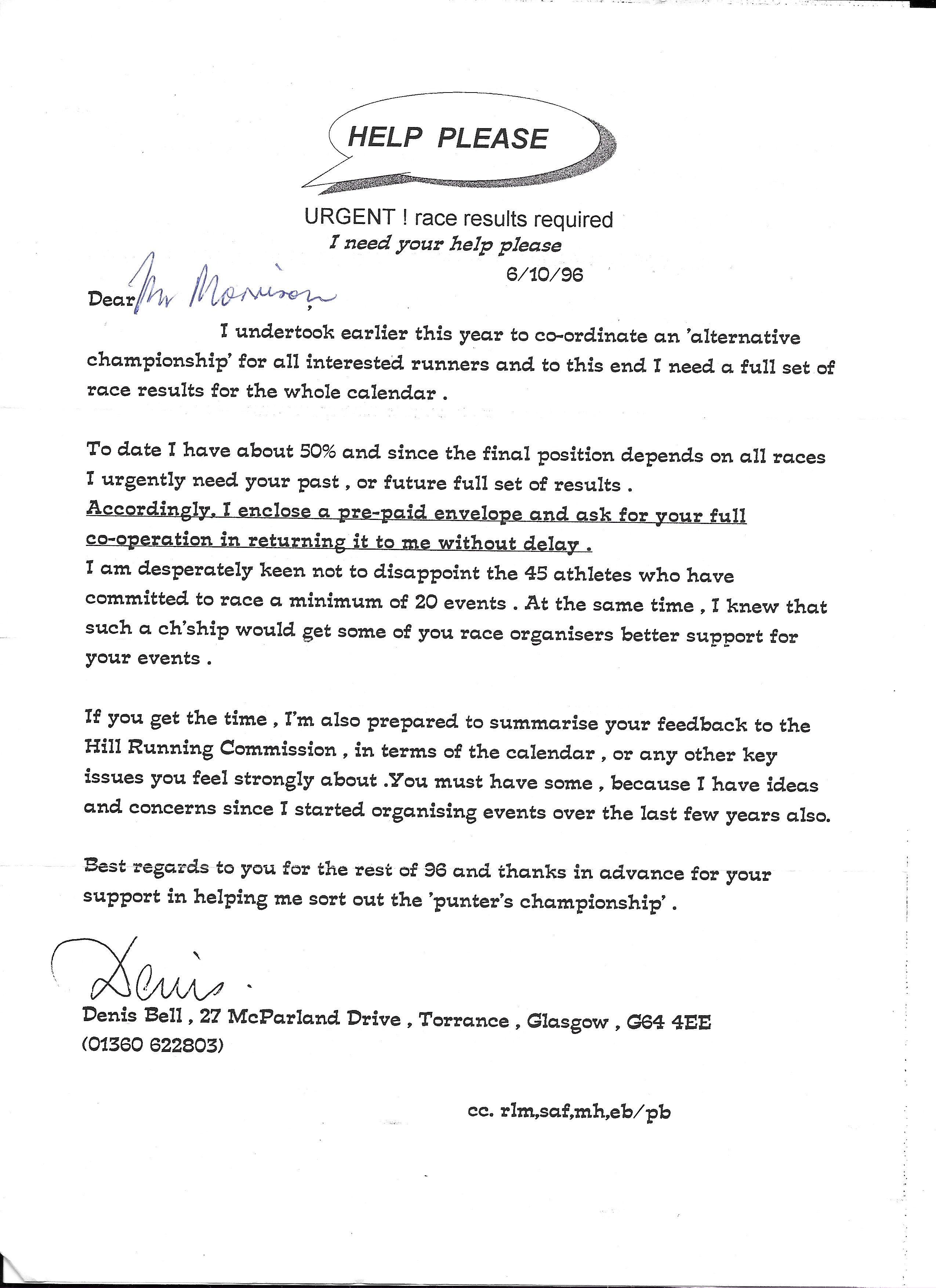 After all that – and the race organisers were all very co-operative – at the end of the season, the spreadsheet was complete and one is reproduced below. 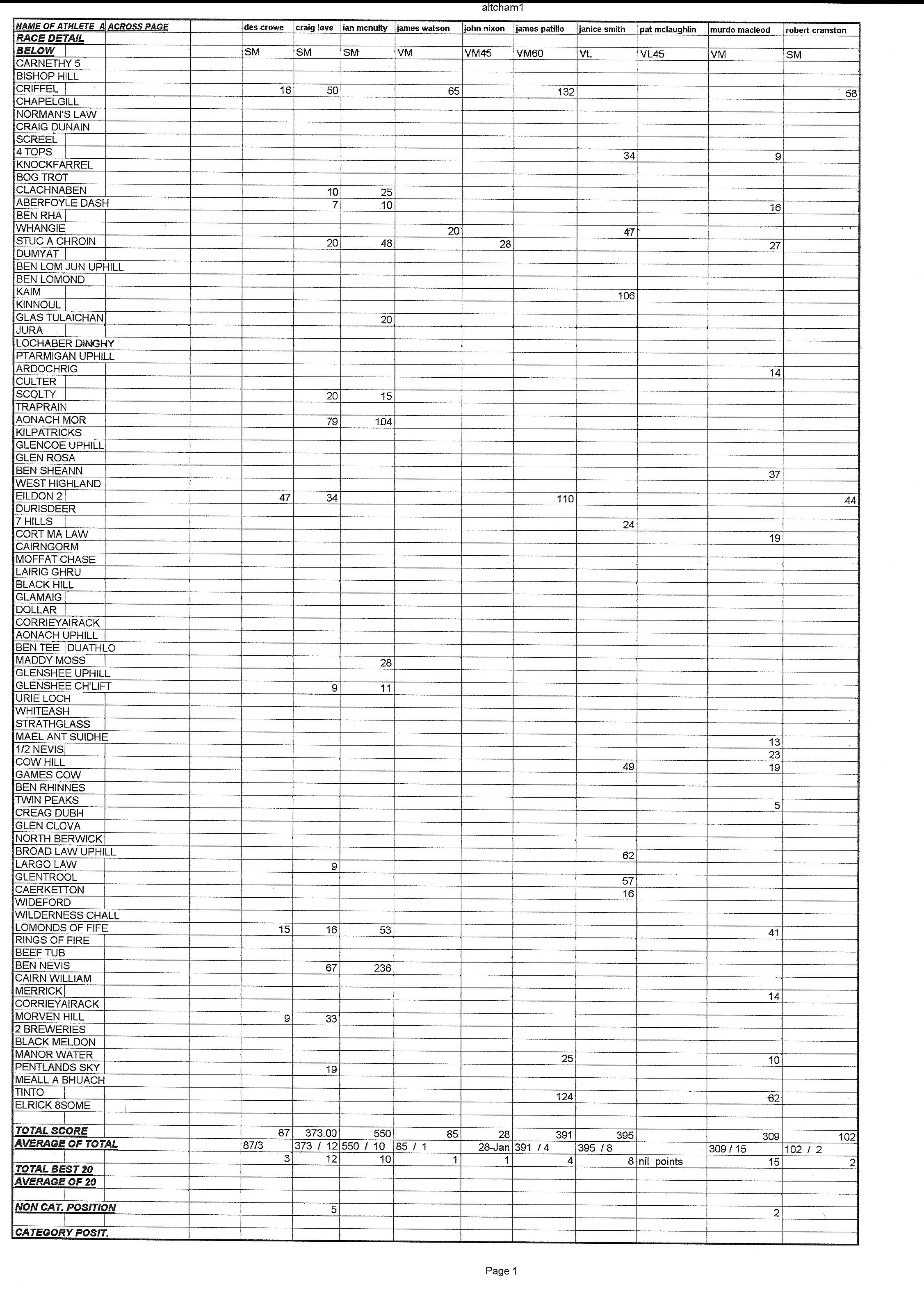 There were some problems in getting complete results sheets and again Denis went into letter writing mode, firing out polite epistles to race organisers and eventually getting the information that he needed to produce the final result.   The results shown below indicate a wide range of participants and their categories.   It really was a championship for the solid, hard running, week-in/week-out competitors who make the sport what it is. 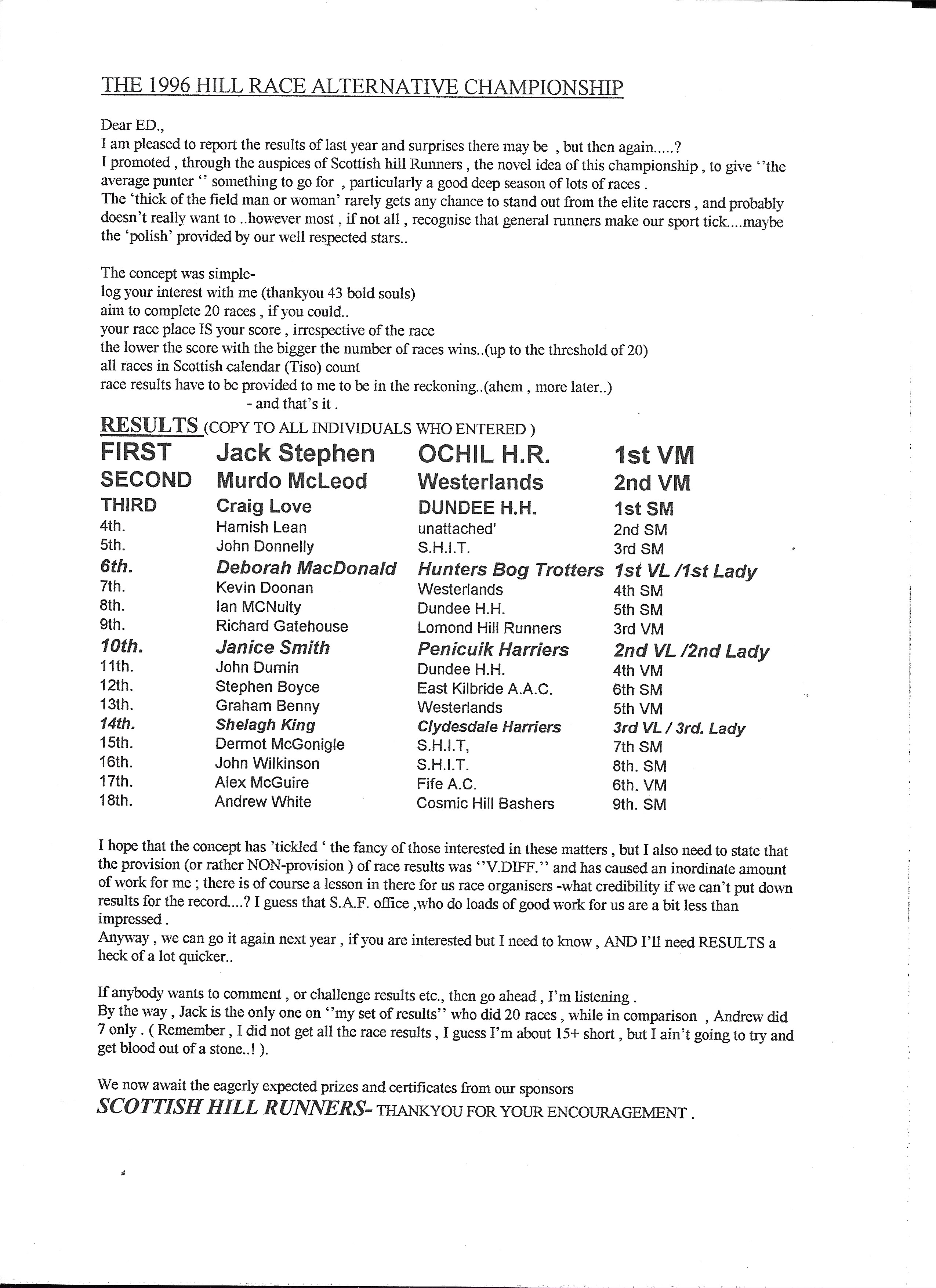 It had been a success due to Denis’s efforts – as well as to the runners who entered, who paid their money, and supported the initiative.