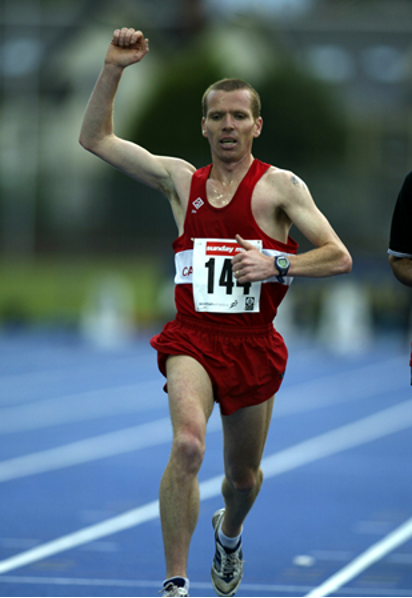 Stephen Wylie has been one of the best and most consistent runners in Scotland over a career that so far has covered more than 30 years.  He’s still picking up more than his share of medals and first places so it seemed only right that we should look at his career in some depth.   He agreed to fill in the questionnaire and his replies are below.

How did you get into the sport initially:  I started running with my dad Frank back in the early 80’s during the marathon boom; trained with him. Joined him in a few half marathons and even a 15 miles race at the age of 11.   I ran over 25 half marathons by the age of 14, running without being officially entered as was too young to compete.

Has any individual or group had a marked effect on your attitude to the sport,  or to your performances?   Some of the guys I trained with, like Charlie Thomson, Allan Adams, Jamie Reid, Alex Robertson were all great training partners.   Alastair Macfarlane was my first coach and he had a really good group of runners at the time and was great to have standing at the side of the track and selecting the sessions.   I always looked up to, and took a lot from, Tommy Murray who came froma similar background to me, and was always a good guy to talk to.   I learned a lot from Tommy and we became rivals and good friends.

What exactly did you get out of the sport?  I had always been competitive and hate losing, so I knew it was the kind of sport where if you are not naturally talented you can work hard and get results.   Also made friends for life through running.

Can you describe your attitude to the sport?  Don’t like getting beaten but I respect everyone’s efforts as I know how much work they put in.   I just like to end a session knowing I have given it everything on that day no matter my fitness.

What do you consider your best ever performance?   The Dunky Wright Road Race, 1990’s sticks out as it was stacked with all the top runners of the day: Adrian Callan, Allister Hutton, Alan Puckrin, Eddie Stewart and many more.   I felt really easy that day and felt as if I could run away from them at any point in the race.   After a mile Hutton and I broke away and I had so much respect for him that I almost felt that I could not run away from him but I felt good that day.   In the end we came into the last 200m together and I went away to win by, I think, 4 seconds.    A couple of weeks later I watched in awe as Hutton won the London Marathon.

Another one that gave me satisfaction was winning the reserve race at the first European Cross-Country Championships as I should have been in the team as I finished fourth in the trial and first four were meant to be selected.   Anyway, back then each team had two reserves and 48 of us lines up immediately after the main race to run the same course.   I won the race by over a minute and my time was quicker than two of the counting GB team in the main race.   They actually gave me a European team gold medal as GB were the first team, but it means nothing to me and I don’t even think I brought it home.

And your worst?   Edinburgh Marathon.   It was a scorching day and I was injured, hadn’t been able to train but I thought I would run.   Walked and jogged in agony to the finish.   I think I ended up in 2:48 but I was in agony.   I have never stopped out of a race, no matter how bad I felt.

What goals do you have that have not been achieved yet?  I still want to compete well for my club and carry on winning medals on the scene.   Andy McLindon is from my town and I have known Andy for 30 odd years  Great inspiration, running great times for his age    He’s a great guy and I admire him a lot.

What has running brought you that you would not have wanted to miss? With a club like Cambuslang, there is great team spirit and competition for places on teams whether it’s Senior Men or Masters.   I like the fact that you can’t just walk into the Cambuslang first team, you have to fight for your place.   When I moved to Girvan, I met Kerry Liam Wilson who I know won’t mind my saying he was a jogger at the time.   Training with him and seeing how he progressed has been great to watch.   He is a guy who puts the work in and I like to think I helped instil that in him.

Can you give some details of your training?    Typical Week: 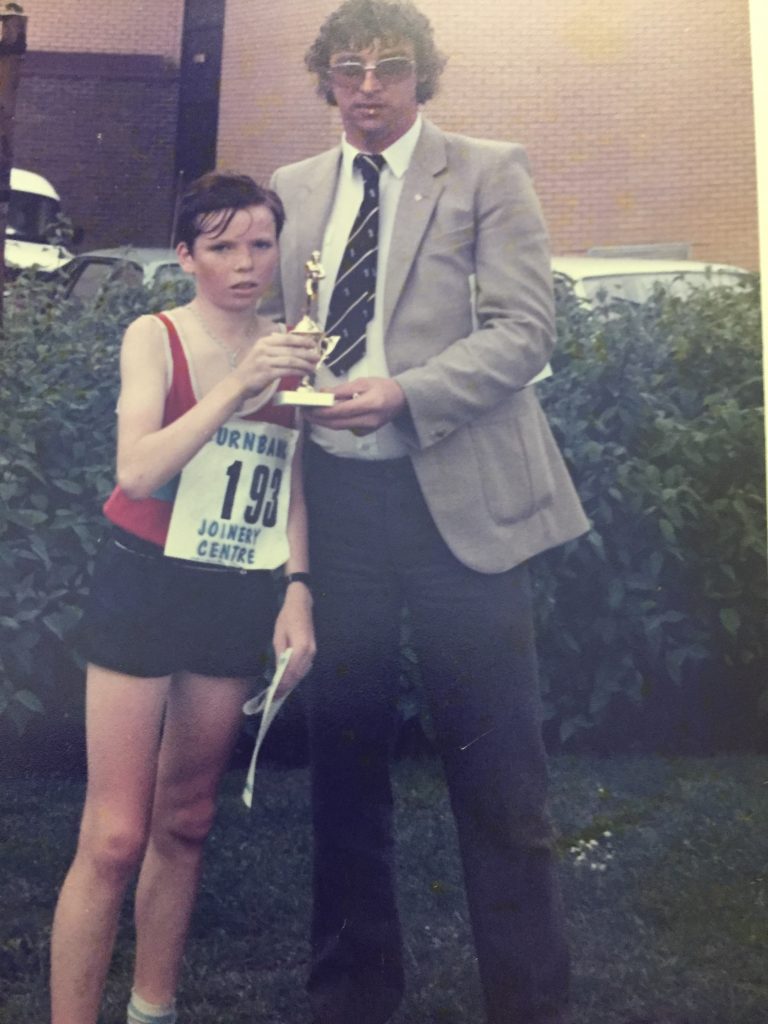 Having read that he ran his first half marathon when he was a boy, it was natural to want to follow up on it and Stephen was happy to elaborate on the subject: “I ran my first half marathon at age 11 and ran at least another 20 half’s before the age of 14 running with my dad without being officially entered as I was too young.   I’m still running and have picked up British medals as a vet and led cambuslang home last May (2018) with the quickest time of the team and 4th fasted overall on the day.  .i have loads of stories such as running for my first two seasons doing cross-country wearing football boots as I could not afford spikes till my neighbour saw me running round the local football park and gave me an old pair he had in his shed .”

Given his level of performance, Stephen naturally appeared in the national ranking lists for a range of distances and over a number of years.   The following list has come from the www.scotstats.net website. 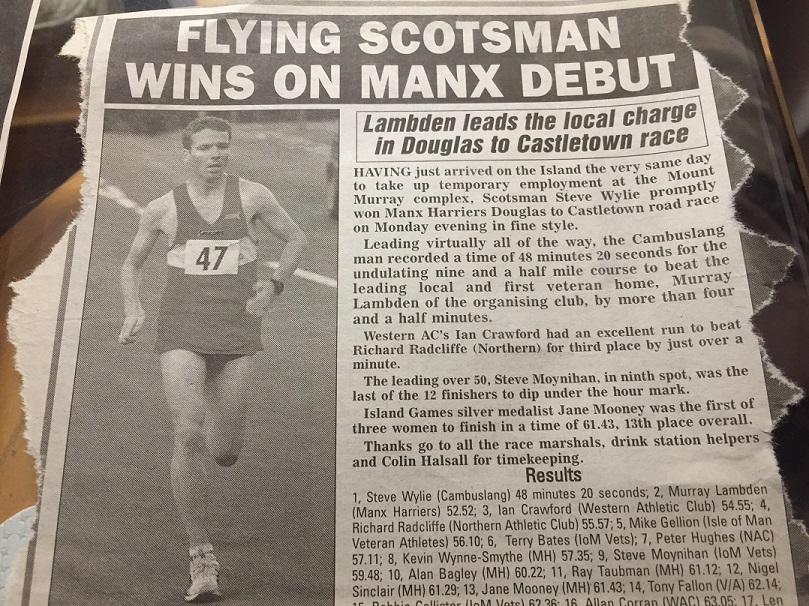 Winter 2002/03 and Stephen Wylie was back in action.   In the West Relays he was in the first team that finished second – slowest of the four he was still among the quickest on the day.   Came the national relays and he was second fastest Cambuslang man round the course for the team that finished second.   On 24th November he ran on the third stage of the Edinburgh to Glasgow and brought the team, which finished fourth,  up from sixth to third.   He didn’t seem to be firing on all cylinders yet but came the 11th January, 2003, and he won the West District Championships by 50 seconds from his old rival Tommy Murray.   The team won with 79 points from Shettleston Harriers (136 points).   The national short course cross-country championship was held on 26th January at Bellahouston Park and Stephen was just out of the medals in fourth place but he was only 10 seconds behind the winner, Steve Cairns of Hunters Bog Trotters.  In 2003 the national championships were held at Linwood and w ere won by Graeme Reid of Clydesdale Harriers with Stephen in second place    The end of the season meant the six stage road relays and Cambuslanag was second to Racing Club:  Stephen was on the last stage and he was unfortunate to drop one place to an in-form Glen Stewart.     A good winter for the first winter back and it was straight into the summer of 2003. 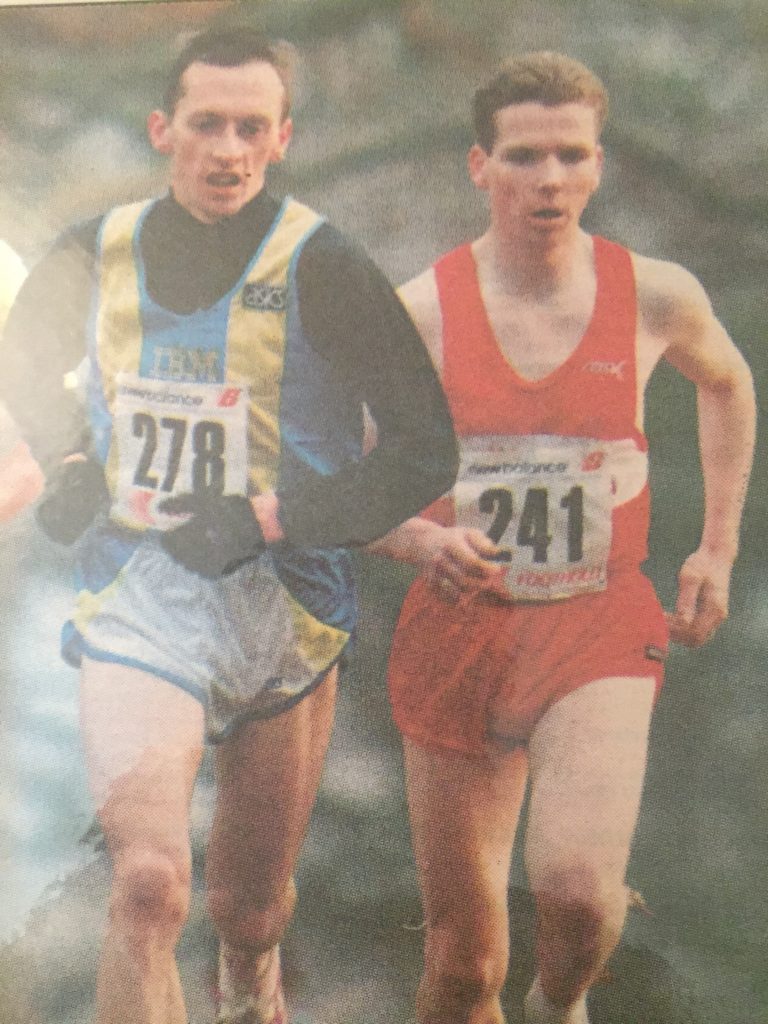 Stephen ran the last leg of the District relays in October 2003 and held on to first spot to see the club home first.   Then on 6th December he ran on the second stage of the national relays and again the team won.   There was no E-G any more so the next big race was the West District and Stephen did not run but in February he was 15th in the national.   If summer 2003 had been good, then 2004 at least matched it.   On the roads there were victories at Glasgow Caledonian, Barrhead (both 5K), Kinross High School, Troon Tortoises, Polaroid Helensburgh, Carluke Dev Trust, Polaroid Dumbarton, Stranraer (all 10K), Dunfermline, Monklands and East Kilbride (both half marathons).    The quality of the opposition was usually quite high, reflecting the standard in the country at the time.   The Dunfermline half marathon was the Scottish championship.  As far as times were concerned Stephen was 13th for 5K, 4th for 10K, and 5th for the half marathon.   On the track, he was not ranked at all and it may be that he was now a confirmed road runner.

In the winter season 2004/05 and he was absent from the two championship relays in October and the national short course cross-country championship in January.   Nor was he to be seen at the District or national championships, or even the six-stage road relay.   Not a good winter for Stephen at all.     He seldom raced the following summer either – unranked at 5K, 5 miles, 10 miles or half marathon in summer 2005, his sole appearance in the rankings was at 10K where he was ranked 18th for his 31:32 time at Auchencruive in February.   He won only two road races in 2005 – at Dundonald in August over 10.5 K (33:48) and at the end of December when he won the Turkey Trot at Ayr in 32:03 for 10K.   The clue to some of the absences was maybe to be found in his club affiliation for the races mentioned – he was ‘S Wylie (Girvan AC)’.   Would the change in affiliation hold good for 2005/06?

The District Relays of 2005/06 were held at Dam Park in Ayr on 8th October and there was no Stephen Wylie to be seen.   Nor was he in the District or National cross-country championships.  BUT —

at the start of October 2006 in the District Relays at Irvine Stephen was on the second stage for Cambuslang for the team that finished third.   Two weeks later in the national relays he was last stage runner and picked up a place but the club could  do no better than fourth.   In the West District Championships,  Stephen finished third behind McNulty (Kilbarchan) and Pollard (Inverclyde) to lead the Cambuslang team home in first place.  The national was held at Falkirk in early February 2007 and Stephen was tenth, the club was second to Hunters Bog Trotters.   In the season’s finale – the six stage road relay – Stephen was on the fourth leg for his club and held the lead which the team held to the end.   He had second fastest time on the stage.   In the questionnaire, Stephen said that his birthday was in November 1971 – which meant that he became a V35 in November 2006.

On the roads in 2006, Stephen was ranked 12th for the 10K with his time of 31:12 from the Ayr Turkey Trot in December and the initials V35 appeared for the first time.   Before that however he had ranked 22nd for the half marathon in 2006 with 71:19 recorded in the Glasgow Marathon on 3rd September and, a first, seventh for the marathon itself with the time (2:30:09) that he recorded when finishing third in the Scottish Marathon Championship in Inverness behind Simon Pride and Jamie Reid.   His race wins that year were few: the 10K at Stranraer on 4th November in 31:57, the Hugh Wilson 10K in East Kilbride on 3rd December in 32:23 and the Turkey Trot in Ayr in the colours of Girvan AC.

Stephen was now a veteran and entitled to race in all their championships and internationals as wel as the full race programme for senior men.   We will look at that part of his career up to 2018 on a separate page.