“Pete Duffy has run for Aberdeen for so many years that many people think he’s a Scotsman, but the facts are that he was born on 25/4/35 at Ashton-under-Lyne in Lancashire, and did in fact return to live in nearby Oldham. He is employed as a civil servant in HM Customs and Excise. Pete began to compete in Scottish hill races in 1960 but didn’t know about English fell races until he ran Rivington Pike in 1967. The following year, he entered the Three Peaks and thereafter travelled to events south of the border as often as he could afford to.

During the 1960s he achieved 8 consecutive runs over the old Ben Nevis Race course under 2 hours; won the 1961 Cairngorm Race in the fastest time ever: 1.10.04; had two victories in the Creag Dubh, breaking the record each time; three victories in the Mamore Hill Race; and won the Knockfarrel Hill Race four times, besides being runner-up three times and third once. His best time for Creag Dubh was 29.44: “It seemed a good time until the English lads started coming to the race.”

Duffy’s English debut at Rivington Pike earned him sixth position in 17.35: “Nothing fantastic about that, but I got a tremendous boost when, at the tower, I suddenly realised that I had reached the top with Ron Hill.” Hill had won the previous two Pike races and finished second that year. Pete came 12th in his Three Peaks debut in 1968, 13th in 1969, 10th 1970 and 9th 1972. In 1975 he had just turned 40 but didn’t qualify for the veteran’s prize, despite being first M40 in 23rd position, as the rule applied only to those competitors who had turned 40 before January 1st. A month later, he won the Chevy Chase in 2.16.30: “I was surprised and very pleased to be overall winner of a long ‘A’ event when over 40.” Duffy has since won many veteran prizes, however, and in 1981 finished 17th in the veterans’ fell championship. During the 1970s, he had gained 11th position in the 1972 open championship, joint 31st in 1974 and 28th in 1975. Pete was one of the 10-man Aberdeen team that set the John o’Groats to Land’s End record in 1973.

Pete Duffy has found it impossible to maintain a rigid training schedule, due to the pressures of family and work, but has run daily since 1959, except when seriously injured or ill. However, he has always believed in a mixed training system, comprising a long Sunday run of over two hours duration, repetition hill runs, repetition speed work on the flat and as many steadily-paced runs as possible during the week. He has had two operations to eliminate persistent injuries. Between 1970 and 1976, he suffered from what he believed to be Achilles tendon trouble, but it was finally found to be caused by a cist on the right Achilles bursa, which was removed by Dr Williams at Farnham Park. This same surgeon also performed a successful operation on Pete’s kneecap to cure knee trouble, which had previously been diagnosed by his GP and local hospital as arthritis.”

Peter Duffy is a unique character, tough and cheerfully irrepressible, who ran for Aberdeen AAC (until 1965) and Motherwell YMCA (from 1966). With Aberdeen, he won two team silver medals (1964 and 1965) in the Scottish Senior National XC – and finished 22nd both times. In the Edinburgh to Glasgow Road Relay he secured two bronze medals – in 1963 with Aberdeen and and 1966 with Motherwell; and another silver back with Aberdeen in 1972.  He trained with and learned from the best: after training and racing with Alastair Wood, Steve Taylor and Don Ritchie at Aberdeen, he went on to run with John Graham (who remembers him fondly) at Motherwell) and Fraser Clyne. Peter won an SAAA silver medal for the Track Ten Miles in 1966 and Marathon bronze in 1969. For 55 years he was a keen hill runner: on Ben Nevis, 8 consecutive times under 2 hours between 1962 and 1969, twice 8th finisher, with a best time 1.51.01 (twice first to the top but his descending was less skilful). Peter was 9th in the 1972 Three Peaks and won the Cairngorm race in 1961, taking ten minutes off the record. For many years he tackled the World Mountain Veteran championships, and completed every race from the inaugural event in 2001 until he was 79 years old in 2014 – unfortunately 80-year-olds are not allowed to take part, even if they carry full-length bad-weather gear, due to fears about severe danger to their health.

This decision (to ban over-80s) was taken after a particularly gruelling event: the World Mountain Veteran championship in Korbielow, Poland. The uphill-only route started at an altitude of 1000 feet and finished at 4000 feet. On the start line, extremely heavy rain started to fall and continued for several hours. Pete was aged 75 at the time but, unlike some others, who were dressed only in vest and shorts, he had rubbed olive oil into his legs to keep them warmer, and had taken a bum-bag which held a lightweight anorak – this he put on not long after the race commenced. It took Pete 1 hour 35 minutes to reach the hilltop finish. Then it was announced, to general dismay, that, since the cable car was not working, runners would have to return to the start hotel by foot. Two exhausting hours later, Pete struggled into the hotel and it took 30 minutes in a hot shower before heat began to return to his hypothermic body. Many others had collapsed and were retrieved by ambulance. It was very fortunate that no one died. Pete says that he had absolutely no desire to repeat that experience!

In October 2020, now aged 85, Pete Duffy phoned to discuss his hill-racing career, which lasted until 2014. He never kept a detailed training and racing diary, like Don Ritchie’s. However, he did keep a one-line note of each race he ran: date, event, distance, result. Pete reckons that he tackled 719 hill races, including several one-mile ‘sprints’, when these short steep challenges were temporarily fashionable. The longest hill events could be 50 km in distance.

Pete’s records indicate that, from these 719 hill races, he won 12 outright and had 172 veteran victories between M40 and M75. Added to those results were 145 second places and 95 when he finished third. He turned 40 in 1975, but for the next three or four years, although he was often first in that age-group, there was usually no prize available….

The Ilkley Incline Fell Race, as one can find out online, is a one mile uphill event, starting on tarmac and finishing on a path. Pete Duffy finished first M70 four times – in 2005, 2006, 2007 and 2009. The photo below, with Pete wearing number 8 and representing Northern Vets, shows how steep the race is! 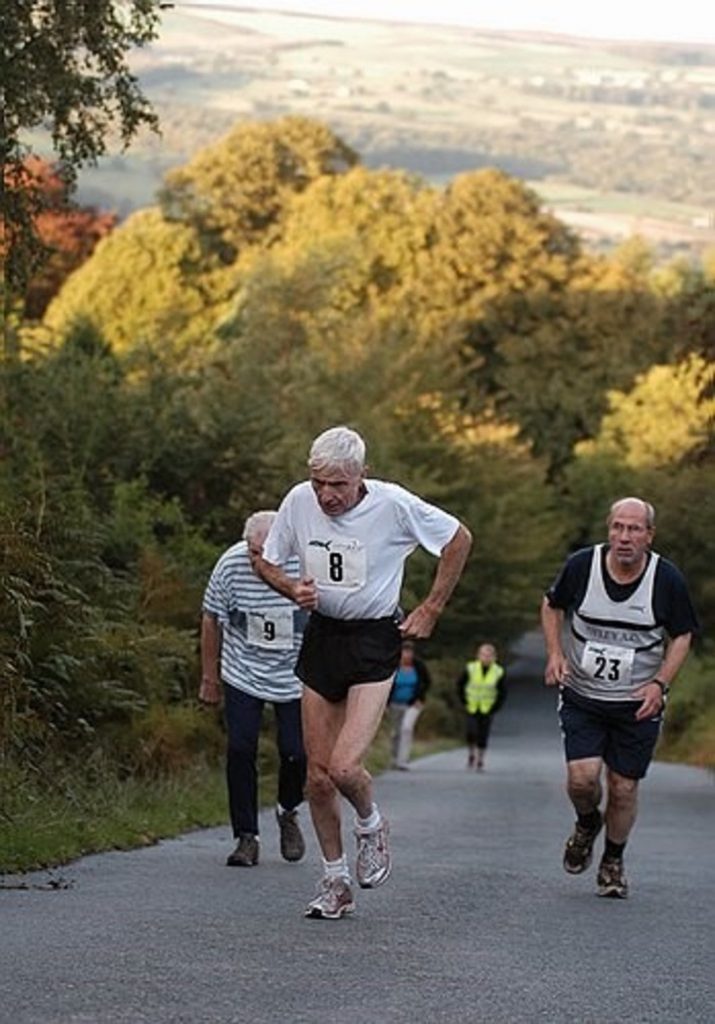 Pete raced abroad as frequently as his work allowed: probably 63 events, mainly after he retired at the age of 60. One memory dates from 1956, when he was on National Service – in Egypt, during the Suez Canal crisis. While they were waiting to be sent home, a cross country race was organised. Many ‘volunteers’ were dragooned into participating. Despite losing time while struggling to swim across the canal, Pete managed to finish second to a notable Yorkshire runner called Sykes.

Pete reckons that he has run/raced in 31 countries and emphasises that no one apart from himself ever paid his expenses!

What were the worst aspects of hill-running, in Pete’s opinion? While descending grassy slopes was not a problem, he absolutely hated rocky downhills. In fact, the notorious descent of Ben Nevis seemed quite reasonable, compared to the likes of Goatfell on Arran, which features very dangerous boulders. In cold, wet, windy weather, especially during a longer race, exposure can be a real worry: he remembers several hill-runners who have died because, especially if you have to stop running, your temperature can plunge rapidly. A bum-bag with rain-proof garments is an absolute necessity.

Yet there is no doubt that Pete Duffy really loved hlll racing. It was not so much a sport for him, more a way of life. The scenery? Well, if you had to walk on steep uphills, you might glance about. Certainly, due to the mist, he never saw views from the top of Ben Nevis! His real intention was to run up and down as fast as he possibly could and to have a sense of achievement, no matter where he finished.

Foreign hill races, particularly in France, seemed to be organised as an excuse to have a banquet and plenty of wine afterwards. Peter remembers how very pleasant and sociable organisers and other runners were.  During racing on a particularly hot evening, he recalls passing several blazing festive bonfires en route, so it was a relief to rehydrate with cool liquids afterwards.

After the 1970 Pendle Fell Race, many runners relaxed in a pub. Someone suggested organising a Fell Runners Association; and Pete joined as Member Number 8. He only retired from running when his body just would not let him take part any more; and is very glad that he kept going so long.

Pete admires the hill-racing exploits of a Scot slightly older than him: Bill Gauld of Carnethy Hill Runners.

Bill is a Life Member and here is what the club website says about him.

Bill Gauld is an institution and it is hard to imagine the club without him, as he has been an active member of the club since, almost, its earliest days.

Other notable achievements include, at the age of 57, winning the Edinburgh Seven Hills Race outright and running a sub 4 hour Jura at age of 59 – 3 hrs 51 mins to be precise!).

He served on the club committee for ten years as Newsletter Editor, and the quality and quantity of these publications was amazing – every year he produced 6 large, informative newsletters. 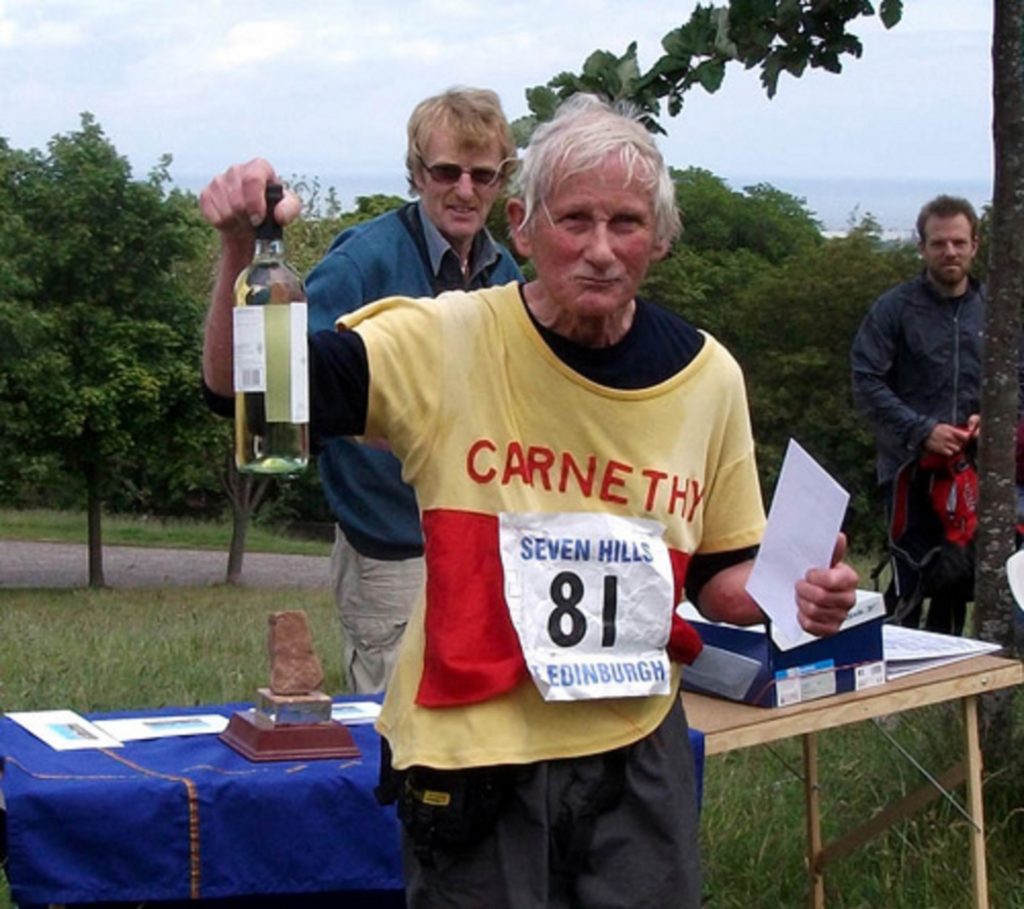 Bill, aged 81 receiving the M70 prize for the Seven Hills of Edinburgh race