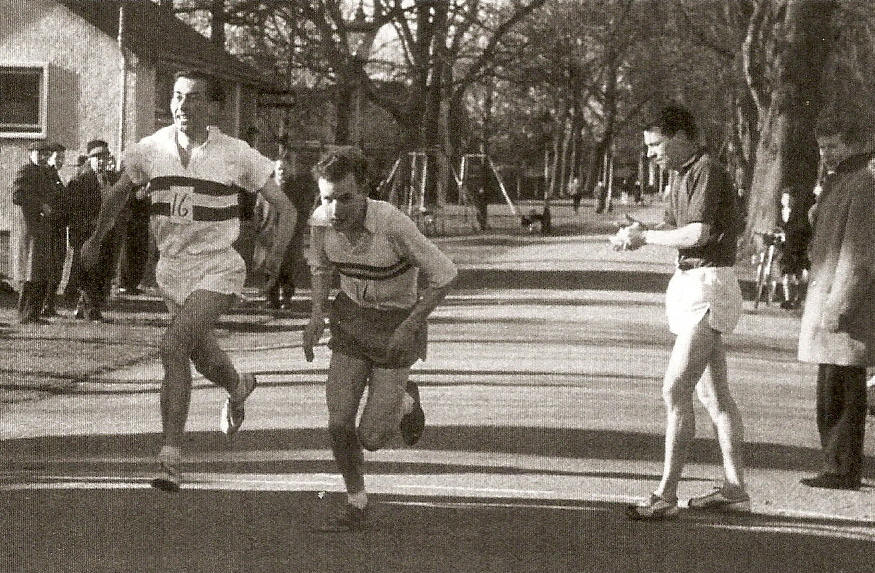 Steve Taylor (centre) taking over from Dennis Whiting in 1961 with Graham Everett (Shettleston) walking in from the right.

In his Aberdeen AAC reminiscences book “We have to catch the ferry”, Steve Taylor (former Scottish 3 Miles Champion and an International athlete on track and cross-country) wrote:

“A popular event at this time, which marked the end of the cross-country season, was the Perth Strathtay Road Relays, in the format of a 4 x 1.5 miles event. Traditionally, most of Scotland’s leading clubs participated and members of the International Cross-Country team used it as a warm-up for the forthcoming international fixture. The 1962 edition was no exception, as the results of the race illustrated. Alastair Wood and Calum Laing tied for the fastest lap time with a new course record of 6 minutes 47 seconds; with Steve Taylor and Graham Everett of Shettleston Harriers tying for 2nd fastest. The team race was a further triumph for the Aberdeen club, beating most of Scotland’s top clubs in a time no less than 53 seconds inside the old record. Such events, which provided the backbone of the sport, are sadly rare nowadays.”

“1965. The ever-popular Perth North Inch Relays (now 4 x 3 Miles) attracted all of the top teams eager to win this prestigious event. Aberdeen AAC, holders of the course record, on this occasion were beaten into 2nd place by a young Victoria Park AAC team from Glasgow, led by Hugh Barrow, at the time hailed as one of Britain’s top middle-distance prospects. Aberdeen, however, had the consolation of returning the fastest and third-fastest lap times, through Alastair Wood (14.20) and Steve Taylor (14.30). Peter Duffy (15.05) and Graham Reid (15.30) completed the Aberdeen quartet.”

“1967: 18th March. The Perth Strathtay North Inch Relay continued to attract top clubs to the 4 x 3 miles event and, predictably, Edinburgh University continued their dominance by winning the event in the fast time of 57 minutes 12 seconds. Yet again, it was Aberdeen AAC who were their closest challengers, and a lap record by Mel Edwards, backed up by solid runs from Bill Ewing, Don Ritchie and Ian Mackenzie, saw the Aberdeen club come within 3 seconds of victory.”

“1968: 16th March. After that pulsating contest with Edinburgh University in the Scottish National XC Championships (EU beat AAAC to the team title by one point), the two rivals met again in the annual Perth Strathtay 4 x 3 miles road relay. Seeking revenge for their narrow defeat, the Aberdeen quartet of Don Ritchie, Bill Ewing, Steve Taylor and Joe Clare dominated the race from the outset, winning by 400 yards from Victoria Park AAC.”

“1969. The Perth Strathtay 4×3 miles road relay trophy came to Aberdeen AAC again, with the club winning in a time of 58 minutes 37 seconds, ahead of Edinburgh Southern Harriers, with Springburn Harriers in 3rd place. The Aberdeen club completed a ‘double’, with the Youth team being victors in their race.”

Colin Youngson added: “I believe that, probably for Aberdeen University Hare & Hounds in the late 1960s, I did race the North Inch Relays at least once but can find no trace of the result – just vague memories of an excellent setting for a competitive, fairly small event. The River Tay rolls past a wide expanse of parkland with tall trees; and the route follows narrow tarmac paths. Many years later, I ran a 10k race which started and finished on the Inches, with a circuit of Perth roads in between.”

Below: Start of the North Inch Relays in 1967 with Hugh Barrow and Craig Douglas on the right in the picture and Shettleston’s Les Meneely and Henry Summerhill on the infield. 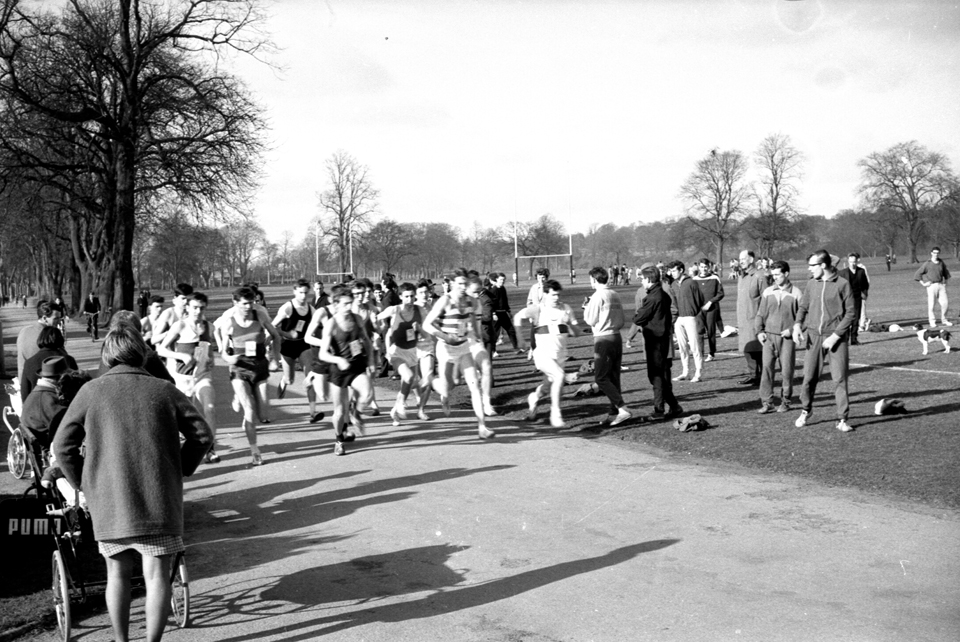