“Livingston was a new venue for the Scottish cross-country championships on Saturday.   It provided a tough but rutted trail exposed to near-Arctic temperatures.   But later on there was some splendid broth – Scotch of course – in the community centre, and through it all a worthy senior champion emerged.   A few days before the championships Nat Muir, the 1978 junior champion, told me how confident he was feeling about running in his first senior championship.   His mileage was up to the mark, his speed and stamina work impressive, all he needed was some reasonably firm ground and the title was his.   Firm ground he was given – so hard in fact that a few gave up in pain after having gone over on ankles whose ligaments were unable to resist the terrible pounding.”   That was the accurate description of the course and conditions faced by the runners in February 1979 in Livingston.

The ‘tough but rutted’ description was a good one.   It was a genuine cross country trail with varied surfaces, varied gradients and obstacles but with the added difficulties of ground frozen hard, rocks – not just big stones – sticking up and immoveable at places.   The bitingly cold weather did not help either.   The map of the course, drawn up by noted orienteer Martin Hyman, included contour lines.   Had the runners known what they were, their plans for the afternoon might not have included a cross country race.   Have a look at this and try to estimate the gradients and general topography. 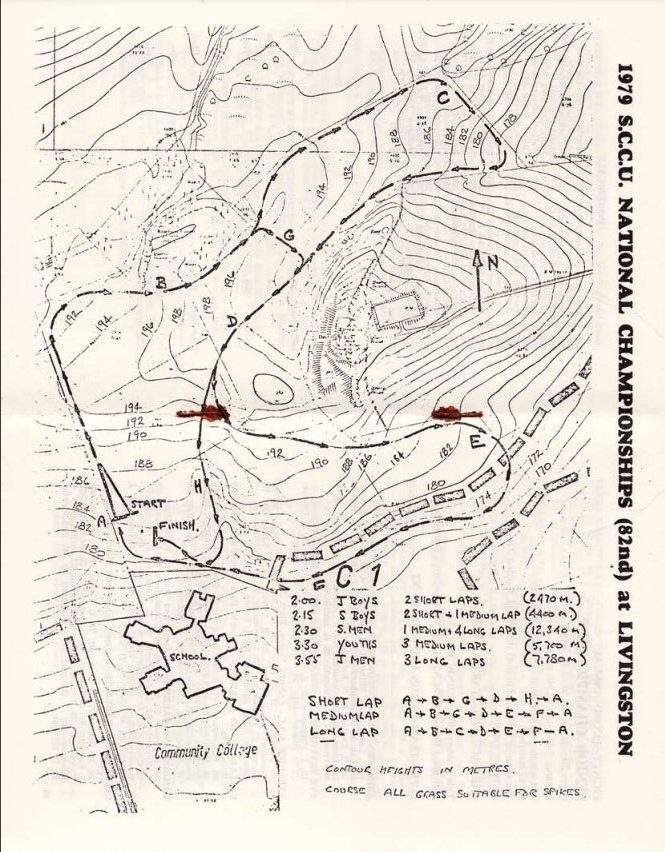 Colin Shields in his “Whatever the Weather” described the situation thus.   “The races were held in bitter, arctic conditions over a tough course made difficult by ice hard, rutted underfoot conditions.”   The pictures on the page so far illustrate how cold it was – runners in a national championship wearing long sleeved tops under their vests, hats, gloves and a couple with old socks on their hands (the story is that unlike gloves, they keep all your fingers together and so warmer than if they were separated!)

The race almost didn’t go ahead because of a dispute involving the local school janitors.   Shields again: “The Union was given a special dispensation by the National Union of Public Employees, which allowed the janitor at Deans Community High School to waive the overtime ban and open up the school on the Saturday for changing facilities for the 1800 entrants in the five championship races.” 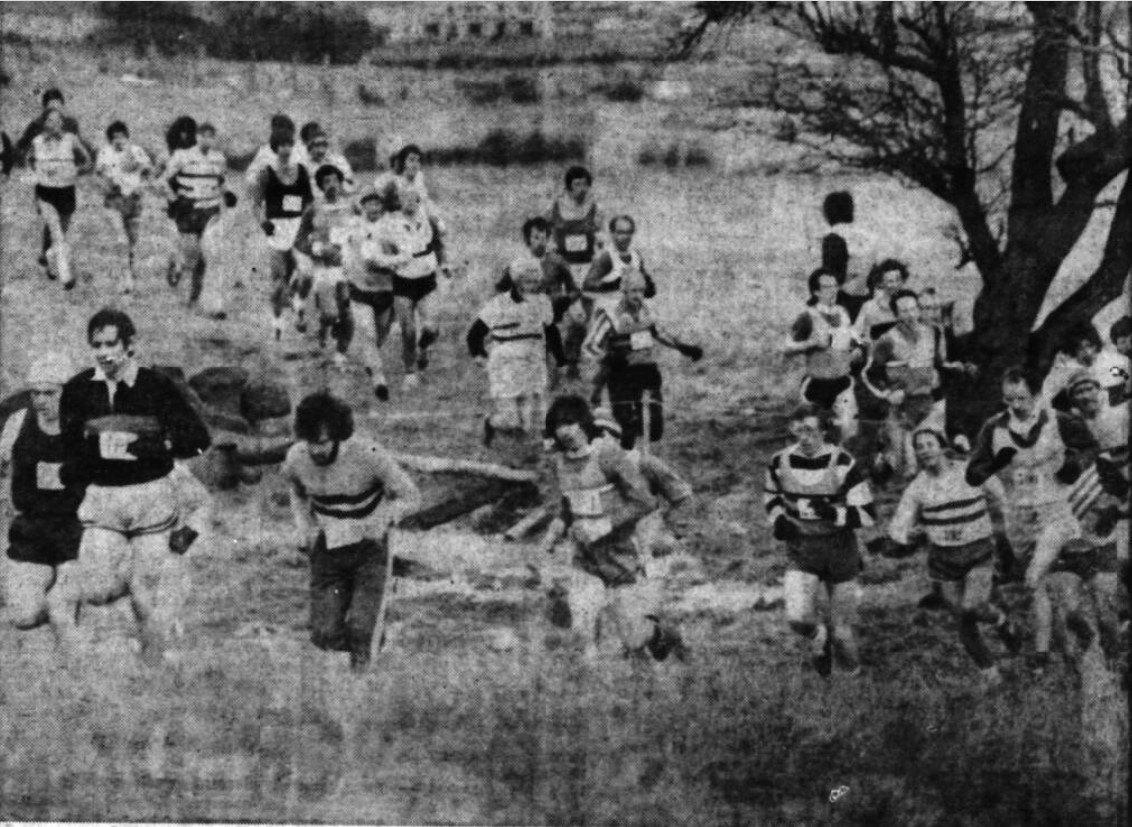 So after all that how did the race go? 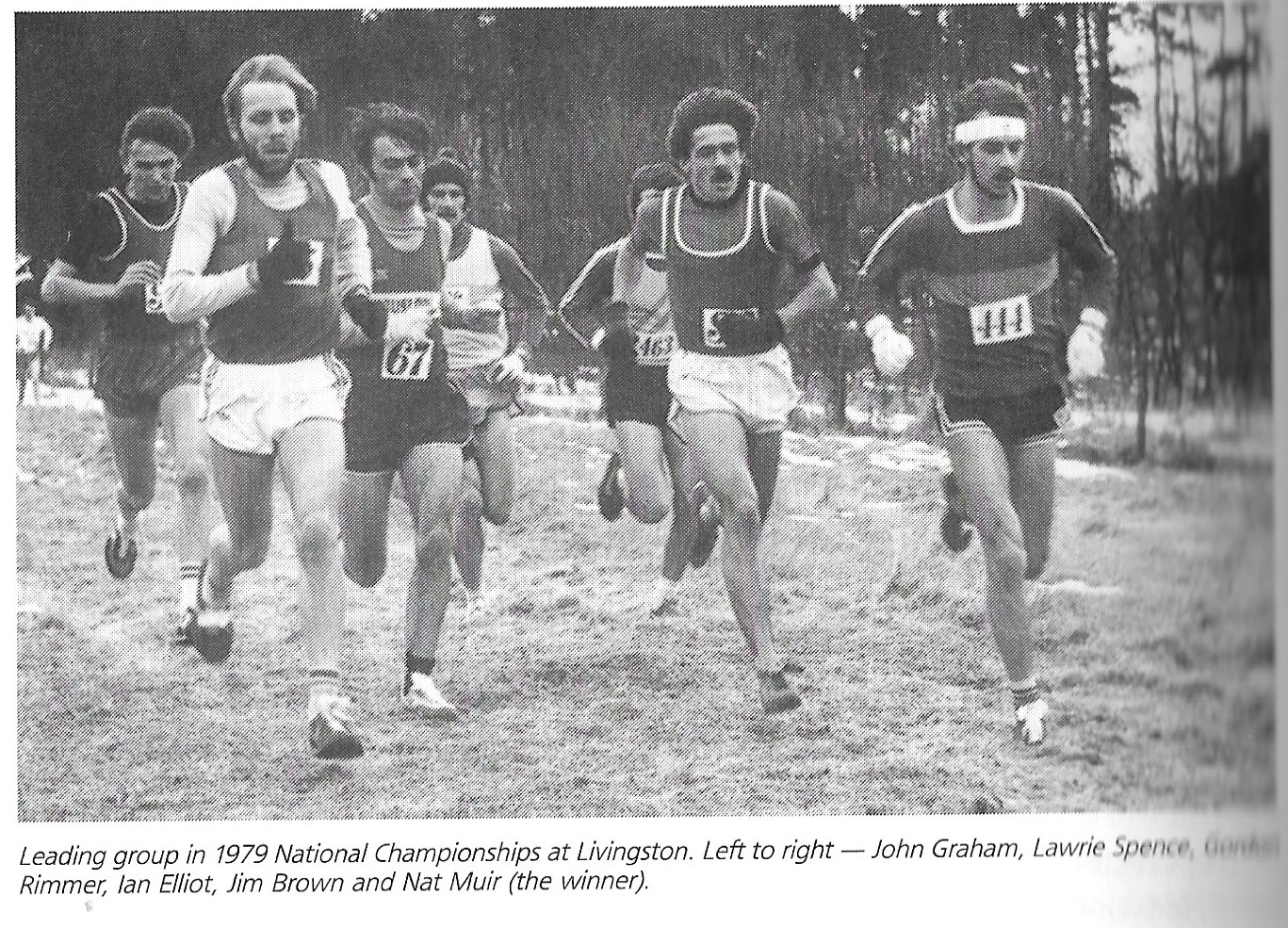 The story of the race was simply told.   Ron Marshall in the “Glasgow Herald” gave the facts as follows.

“Muir’s performance in bitter conditions was quite astounding.   As each of the four big laps unwound he became faster each time – 8 min 32 sec, 8:27, 8:21 and finally 8:17.   By that time Lawrie Spence, his most dogged companion in the early stages, had been left nearly half a minute behind, himself ultimately 23 seconds clear of the third man, Jim Brown.” 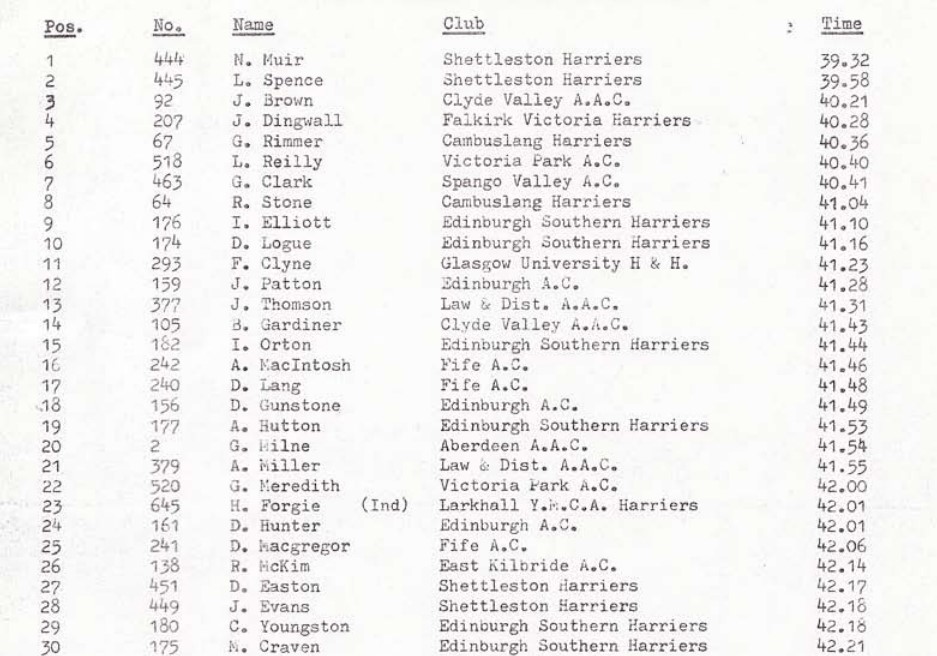 The complete result – place, number, name, club and time – for them all can be found at

But infairness to Colin, it was a real high quality field – check the website address above – with quality international athletes being placed outside the first 50 of the 255 finishers.

Alex Jackson also shared some memories of the day: