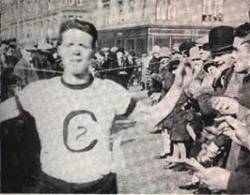 Jock Semple, pictured above winning the Balloch to Clydebank race in 1924, joined Clydesdale Harriers after the first war and proved to be an excellent athlete who always worked on the club committee in a variety of roles such as Junior Captain and as a member of the Finance Committee.   A contemporary and friend of Dunky Wright he emigrated to the United States looking for work in early 1923.

On arrival in the States he settled in Philadelphia and joined the Meadowbrook club in whose colours he ran his first marathon in June 1926 winning the award for the first Philadelphian.   He came back home for a visit in 1927 which lasted 15 months while he received treatment for an injury.   While here he ran in the Polytechnic marathon trying for a place in the British Olympic team and finished ninth.   He then went on to London for the AAA’s marathon where he finished sixth.   in those days they chose six men for the team but they took some from each race and he didn’t make it.

On his return to the States he ran in the Boston Marathon where he finished 29th of 250 starters.   In 1930 he really trained hard and was ninth in the American Marathon Championships in new York and immediately hitched to Boston where he was ninth in a race that included American, Finland and Canada.   He then moved to Boston permanently and that was the start of a very good athletics career.   In 1932 he started to think of the Olympics again.   He was running well and had a series of three wins in the New England Marathon (1931, 1932, 1933) , he had beaten two of the Canadian team in their own marathon championship when he finished second, he beat two of the Americans in the US championship in Washington,  in Boston he beat the third American and the German first string marathon runner.   Britain was only sending two marathon runners – his old friend Dunky Wright and Sam Ferris – to the Olympics so a Canadian marathon official and friend of Jock’s sent his credentials to the British Olympic Commission plus Jock’s offer to pay for his own expenses and uniform for the Games in Los Angeles.   The offer was turned down flat.   His marathon career continued unabated and, unable to get into the British team, he took out US citizenship and competes for the USA in the first Pan American Games in 1937 where he finished fourth.   During all this time he was experimenting with himself and with his equipment – he often made new shoes using the skills he had learned while working in a shoe factory in Lynn, Mass.   The most exotic ‘experiment’ (his word) was part of a series of tests carried out by Harvard on distance runners.  It was conducted in the University’s ‘Fatigue Laboratory’.

“First of all they told me the results of the blood test after the Medford race.   My blood sugar was the highest, 140, which tells me that I can punish myself  more in the early part of the race as I had a lot in reserve.    Then they connected my heart, diaphragm and two points on my back to a machine.  I had small metal pads strapped to these points making connection with the electric wires.   The idea was to record on to a tape recorder similar to the stock exchange type, the increase in my heart action by exercise.   I sat on a chair at rest.   The machine was started and I had to walk on.  It is like these moving stairways .   It is on a slope and the first speed was four miles an hour for five minutes.   My heart went up to 120.   the average person goes up to 160.   Then I had my nose closed with a gadget and a tube leading from the fresh air outside was put in my mouth while the impure air breathed out was collected in a tank for further testing.   I was still walking.   Then a ten minute rest sitting and they still record the heart to see how quickly it comes back to normal.   The machine was then speeded up to seven miles an hour but with the slope it is equivalent to nine.   I kept this up for five minutes and felt it a little.   The average person usually does two miles.   Another ten minutes rest as before.      After the walk and the run blood was taken from my arm.   I then had a long rest and a thorough physical examination by a doctor and he pronounced me in wonderful shape.   My heart at rest is only 50 which is an asset for distance running.   Now came the biggest test of all.   The machine was speeded up to nine miles an hour which would be twelve on the level.   They said if I kept it up for two minutes I would do well, but oh, boy!    Was I pooped?   It required all my will power to stick it out.   Another ten minute rest and   blood test and I was through.   The test showed me that my heart comes back very quickly to normal.   I then went out on to the Harvard Stadium track which is one of the finest in the country.   I did three miles in 17:30 which is not very fast but not bad after what I had been through.   One detail I missed.    I had supper at 6:00 pm on Wednesday and had nothing until 6:00 pm on Thursday.   They can do the test better on an empty stomach  (Mine) but they don’t often get them to go without eating!”

That was Jock in 1935 and still there are people in the UK who don’t believe in using what science has to offer.   He also kept fairly detailed records.    For instance

The miles don’t mean much to the present day athlete but we are all children of our age when it comes to training and he was averaging about 42 miles a week.

One of his own experiments was a bit of a disaster though.   Early in his marathon running days he had trouble with his feet slipping inside his shoes so he invented an adhesive that would hold his feet still inside his shoes.   The adhesive stuck too well – and it was worse than before because his feet were overheating inside the shoes and he needed to change shoes but because of the adhesive he couldn’t ……………………

When the war came along he joined the Navy after Pearl Harbour and served as a PT Instructor.   He was assigned to the Sampson Naval Training School where he was in charge of all athletics activities and was coach of the track team.   “After the War I resumed my old routine but at 42 I was over the hill as a contender.   I worked for a year then went to physiotherapy school.  My plans were to be a trainer and secretly I wanted to be one of the best. “

Over the hill or not he was chosen to represent the USA in the Kosice Marathon   in 1947  in Czechoslovakia but ran poorly because of a stomach upset “My bowels ran better than I did!”   He was trainer for the US Hockey team at St Moritz in 1948 and also for the World Championships in 1949.   On the way to Kosice he stopped off in Scotland and was interviewed by Dunky Wright on the radio.   Jock was trainer again for the US Olympic team at the Winter Olympics in 1952.   “After that I decided I had had enough and started to develop my private business and help build the Boston AA team.”

He set up in business as a physiotherapist with the remit of looking after all the athletes who used the Boston Garden and eventually had an exalted private patients list that included the Kennedys, Stan Smith the tennis player, Rocky Marciano, world heavyweight boxing champion and many more.   He also coached many winning Boston teams as well as individual winners Young Johnny Kelly and Bill Rodgers.

He is probably best known now for his work in organising the Boston Marathon with his friend Will Cloney.   There is enough written about that elsewhere but his career as a runner was a very good one and if you want to read more, look at Tim Kerkorian’s book on ‘The Boston Marathon’  and just look up the index for Jock Semple and read all about him.

His racing career went from 1926 to 1947 – 21 excellent years with world rankings almost every year even through the War.  His highest World ranking was 21st in 1944; his best competitive year was probably 1931 when he was ranked 30th, 31st and even one hundred and third in the world.   As a Scot all his life, he donated many, many trophies to the SAAA and the SCCU along with cash to cover any administrative costs or additional mementos to the winners.

Bobbi Gibb: First Woman to run in the Boston Marathon