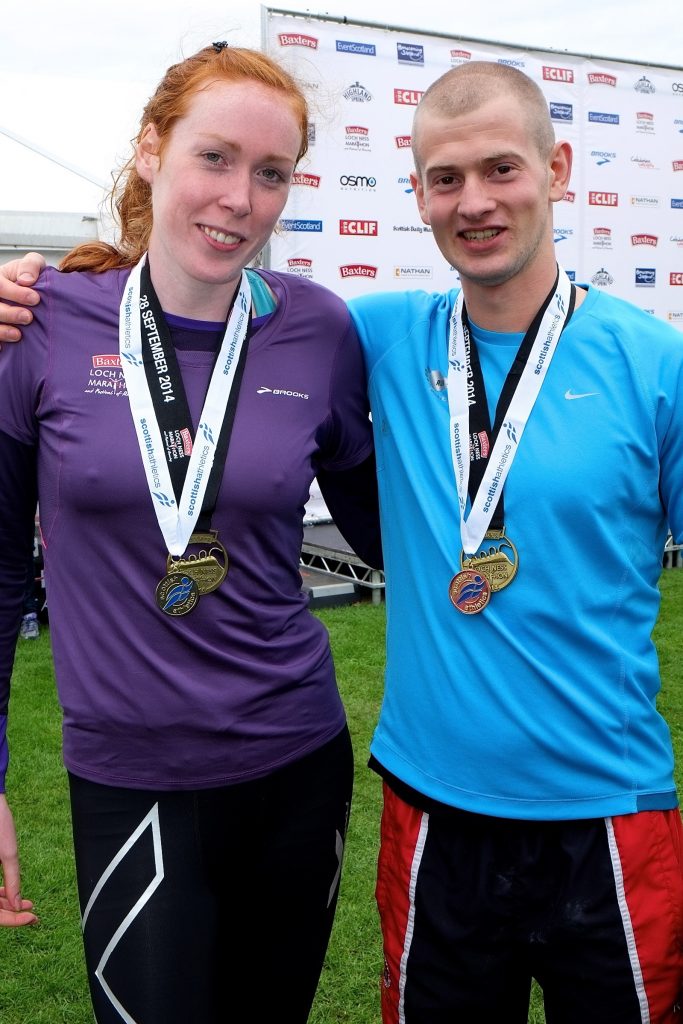 Apart from Central AC v Fife AC rivalry, Jennifer Emsley and Megan Crawford have had some close battles. In 2013, Jennifer secured Scottish Half Marathon silver and Megan bronze. In 2014, Jennifer won Scottish 10k gold and Megan silver. The most memorable battle must have been in the 2014 Scottish Marathon at Inverness, where Megan (the title holder 2.46.25) was outkicked by Jennifer (2.46.10). However, Megan won even faster (2.44.50) on the same course in 2015. In 2019, Jennifer Wetton regained the Scottish Marathon title at Stirling.

In 2014, Fraser Clyne wrote: There was a dramatic finish to the women’s race in which Jenn Emsley (Central AC) held off a late challenge from title-holder Megan Crawford (Fife C) to take the top prize in a new course record time of 2:46:10, knocking 27secs off the previous standard. Crawford was also inside the old record, which she set twelve months earlier, when finishing just 15 secs behind, while Shona McIntosh took the bronze in 2:53:15.

Emsley was delighted with her day’s work which, in addition to the record, yielded a Scottish title, a personal best time and a winner’s cheque for £1500. She said: “I am very happy but surprised to have run a quicker time than I did at the London marathon, as I think Loch Ness is a harder course. But my training had been going well and I feel I’ve finally justified the hard work I’ve been doing.”

“There were four of us for the first 10 miles then the Romanian runner, Alina Nituleasa, dropped back. Megan then seemed to drop back and I eventually pulled away from Shona. Then, near the end, I could see that Megan was beginning to close up on me again so it was just a case of keeping going and not getting caught.” 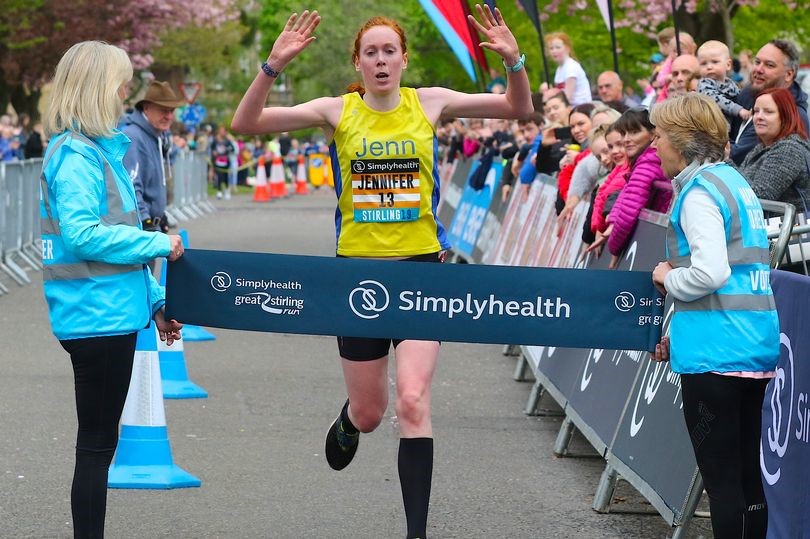 I started running at the end of 1997 (when I was 11) to train for the Island (Arran) Schools’ Sports Day 800m the following year. I’d watched the race in 97 and been inspired by seeing a girl win it by a huge margin – I then beat her by a similar margin in 98. Ran XC for the high school and won the Ayrshire Schools Champs in 99. After that I joined Arran Runners and got involved in more mainland competitions. After finishing 3rd Under-13 in the Scottish XC Champs in 2000 (outsprinted for 2nd by Eilidh Child), my dad was approached by a few clubs who wanted me to run for them and we chose City of Glasgow. That opened up more team and track racing opportunities for me. When I started university in Stirling in 2004, I began training with Derek Easton’s group at Central and changed clubs.

My first Scottish title was the Under-15 1500m in 2001 and a few weeks later I made my first Scotland team for the World Mountain Running Trophy.

I moved up the distances gradually over the years. I started 10k running when I was 15, half marathon when I was 22 and then ran my first marathon at 26.

The people who have had the most influence on my running over the years would have to be Jim Young (Ayrshire Harriers), Martin Hyman, Derek Easton and my dad, Paul Emsley. My training group at Central have helped me a lot especially Morag Millar and Lyndsay Morrison who remain close friends.

Everything: Enjoyment, Health, Fitness, Competition. Travel. Adventure. Friendship. Satisfaction. The joy of sharing my sport with my children.

Best performances would probably be the Stirling 10k (Scottish Champs) and Loch Ness Marathon (also Scottish Champs) in 2014. Both races were battles with my friend and rival Megan Crawford – we had many races together over a couple of years and I always enjoyed the competition.

I’ve had too many bad races over the years to pick out a worst performance.

Always wanted to run under 2:45 for the marathon but the stars never aligned on the day when I was in shape to do so. Now that I’m a mum of two, I doubt that I’ll have the time (or the motivation) to do the required training to have another shot at that sort of time.

Having two young children doesn’t leave me with too much time for leisure activities. I enjoy running with the kids in the buggy and going on adventures with them – usually finishing a run in a park or a coffee shop.

It has brought me a great deal of personal satisfaction over the years – I feel that I have come close to achieving my full potential at most distances. In recent years I have enjoyed running with my kids – seeing them enjoy it too has probably been the best part of my running life.

Most of my runs at the moment are with a buggy and on Friday & Saturday are with the double buggy.

Jennifer Emsley Wetton ran for Scotland in: a Scottish Schools XC International; ten Hill Internationals (including two  under-20 World Mountain Trophy selections); two under-23 Cross-Country events; at Senior level, one Trail race; and, on the road, one 10k, two 10 miles and one Half Marathon.

My versatility is down to my dad, Paul – he was keen for me and my brother, Nick, to try out as many types of running as possible when we were young so took us to all sorts of events. Dad was club secretary of Arran Runners for a decade so was sent all the adverts for races and took us to a lot of them. I can remember being dragged off to the Kelvin Hall between Christmas and New Year for a 600m at an open graded meeting because Dad thought it would be fun. It was the same with my introduction to hill running – Dad got a leaflet in the post about it and we were off to Glentress Forest to run – I ended up getting selected for the Scottish team and soon found myself running up a hill in Italy!

Growing up on Arran meant that I had plenty of hills to train on but most of my running was done on the flat road along the front of my village, Whiting Bay. In the summer we (my dad and I) would train on the grass at the local park/football pitch when preparing for shorter distances.

Not surprisingly, as she approached 35 years of age, Jenn Wetton looked forward to exploring the varied possibilities of competing in Masters Athletics!