The very first mass participation marathon in Scotland was the Inverclyde Marathon – styled the ‘Inverclyde Folk Marathon’ – and it had a chequered career from its start in 1091 until the final running in 1998.   At its peak it was one of the very best in the country but there was a three year shut down quite early on before it was resurrected.   It was used as the SAAA and SWAAA official marathon championship, it included at times an international contest and had fields of over 1000 runners.   Joe Small ran in the first one and he clearly still looks on it with affection: he has written the account of the career of the race which is reproduced below.

The Inverclyde Folk Marathon was first held on Sunday, 30th August, 1981 when a field of over 500 set off from Greenock Esplanade to cover the 26.2 miles – there were 498 recorded finishers.   1981 was also the year of the first London Marathon and arguably, Inverclyde was the first Scottish mass participation race over the classic distance, the inaugural Glasgow People’s Marathon taking place in 1982.   Such was the novelty of the race, it made front page headlines in the next day’s Glasgow Herald, complete with photographs.   The course was essentially flat, staying close to the Clyde throughout.   From the Esplanade start, the route headed west towards Inverkip before doubling back through Greenock and Port Glasgow, another ‘U’ turn, then heading back to the centre of Greenock and finishing, again on the Esplanade.   The 1981 race, in which I competed, produced a win for the remarkable local runner Bill Stoddart (Greenock Wellpark Harriers).   At the age of fifty he triumphed over a field of good class road racers, principally by running a very even paced race throughout.

If memory serves, I was in third place at the 20 mile point, well behind the two leaders, with Bill still behind me.   He stormed through the last six miles, passing all in front of him, to win in a time of 2:27:43.   This time was only 23 seconds outside the world record time for a 50 year old – and a time I’m sure he could have beaten.   Second was Evan Cameron with another local runner, Cameron Spence in third.   An interesting finisher in 18th place was Lachie Stewart.   The women’s race was won by Leslie Watson (London Olympiads AC), one of her many road race victories around this time, recording 2:54:32 to finish in sixty sixth position overall.   Result:

The second running of the race, on Sunday, 29th August, saw Tommy Wiseman (Victoria Park AAC) winning his first ever marathon.   The winning time of 2:26:29 being a new course record.   Wiseman won by a distance from last year’s winner, Bill Stoddart, with Stoddart’s team mate Tony Bird taking third place, a further 49 seconds behind.   Victoria Park AAC won the team race.   Leslie Watson (London Olympiads) repeated her victory of last year, improving her time to 2:51:38, over three minutes faster than in 1981, a performance which saw her placed fifty sixth overall in a field of over 600 runners.

The 1983 race, sponsored by IBM, resulted in a victory for John Stephens (Dumbarton AAC), in one of the closest finishes in marathon history.   Competing in his eighth marathon, Stephens set a new course record when crossing the line in 2:22:21, over four minutes faster than the previous year’s winning time.   Chased along the Esplanade by local runner John Duffy (Greenock Wellpark), Stephens produced a sprint finish over the last 100 yards to prevail by three seconds from Duffy.   Two minutes further back was Gerry Fairley (Kilbarchan AAC) in 2:24:33.   Unfortunately the result as published in the Scottish Marathon Club Magazine does not include any result for a women’s race.   The men’s results go down as far as fiftieth position (2:48:15) and they were always meticulous in reporting women’s results.   If there was indeed a women’s event, we would really like the result.   Men’s race results are as follows:

26 year old John Stephens, a Royal Navy physiotherapist from Dumbarton AAC repeated his victory of 1983, beating more than 1100 rivals.   His time of 2:23:13, slightly slower than the previous year, saw him defeat clubmate Allan Adams by more than two minutes, however runner-up Adams won the veterans prize.   Third place was taken by David Fairweather (Law and District AC) in 2:26:57.   The women’s race went to Rosemary Gillick (Stone Masters Marathon Club) in a time of 2:59:39.   Second was Margaret Meredith (Red Rose AC) well back in 3:11:17.    Dumbarton AAC won the team race with 14 points from Spango Valley on 25 points.

The first running of the race following the three year break, was covered by Doug Gillon in the ‘Herald’ as follows: “Three local athletic clubs have secured £10,000 from Greenock based computer firm IBM and have launched the Inverclyde Athletics Initiative.   The sponsorship is being used to stage a Festival of Running on August 20th consisting of a fun run, a 10000m and the re-introduction of the Inverclyde Marathon.   The 1981 race was Scotland’s first mass participation event but was last staged four years ago.   Now, however, with the demise of several national marathons including the prestigious Glasgow event, IBM Spango Valley and the rival athletic clubs Glenpark and Wellpark, have got together to revive Inverclyde.

IAI is chaired by former internationalist Bill Stoddart who, at the age of 50, won the inaugural event in 1981.   The Initiative’s other targets include an all-weather track for which it is hoped the district council will shortly give approval.   The marathon carries total prize money of £3000 with £500 to the first man and £300 to the first woman.   The Scottish Women’s Cross-Country and Road Running Association have designated the marathon as their championship event.”   The winners of the races, and the lucrative purses, were England’s Gareth Spring in 2:25:22, and Julie Harvey of Scotland in 3:06:23. 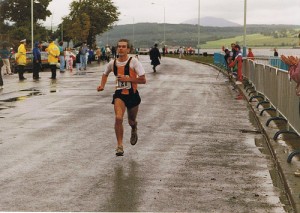 This year saw the race incorporate the Scottish Marathon Championship for the first time.   Terry Mitchell overcame strong headwinds and heavy rain to claim the Scottish title.   Taking the lead after just six miles, Mitchell ran the following twenty miles all on his own to win by 2 minutes 20 seconds from former two-time winner and course record holder, John Stephens.   “That shows I’m recovered from an early season injury”, said Mitchell, “I wanted to run at my own pace so went into an early lead and felt good all the way, in spite of the strong wind in my face throughout the race.   I’m planning to run a marathon in Crete in November where I’m sure the weather will be better.”   Eileen Masson won the women’s race by over 13 minutes from Julie Harvey, and was just 20 seconds outside her best time of the year.   Result:

This year’s event was part of ‘The Inverclyde Festival of Road Running’ which saw a half-marathon being contested in addition to the full distance race.   This undoubtedly had an effect on the quality of the field for the marathon with Tommy Murray in the colours of Cambuslang Harriers, clocking 1:08:53 to win the half distance event.   John Duffy completed his third win in the marathon, his time being by far the slowest winning time in the history of the race.    Eleanor O’Brien of Greenock Glenpark Harriers won the women’s race, again in a slow time.   Result:

Once again, the race was chosen as the Scottish Marathon Championship event.   Fraser Clyne (Metro Aberdeen AC) Last year’s Scottish Champion, retained his title when winning the IBM Inverclyde Marathon.   He led from half distance to win in 2:26:40, finishing almost three minutes clear of English runner Ray Lees (Clayton-le-Moors).   Veteran Dennis McAra (Falkirk Victoria) passed Martin Coyne for third place after Coyne suffered a hamstring injury in the final half mile.   England’s Eleanor Robinson won the women’s event by a huge margin, over 23 minutes ahead of the runner-up.   Result:

The only information available on the 1994 race is the names of the winners:

Having led for 24 miles, veteran David Fairweather (Cambuslang Harriers) tired badly in the final stages of the Inverclyde marathon and finished in fourth place.   His clubmate, Leo Sho-Silva, finished strongly to win in 2:42:20 just 29 seconds ahead of veteran Andy Stirling.   Gordon Porteous (Maryhill Harriers) the oldest man in the race missed the Over 80 world record by two minutes but set a new British age group best of 3:47:04.    Helen Slimon (City fo Glasgow) won the women’s race by over 38 minutes ahead of the runner-up.    There was also a six-man marathon relay held on the day of the race which was won by Shettleston Harriers in 2;16:23.   Result:

The former World Cup and Commonwealth Marathon internationalist Fraser Clyne showed his experience when, though more than a minute behind at half distance, came through in the final six miles to win his fourth Scottish Marathon Championship in the Inverclyde Festival of Road Running at Greenock.   Clyne finished in 2:28:25 also claiming the Scottish Veteran crown.   Eleanor Robinson recorded her second victory in this race, comfortably over half an hour ahead of her nearest challenger.   Result:

The was the final race held over the marathon distance at Inverclyde.   Once again, the race was chosen as the Scottish Championship Marathon, now known as the SAF Championship.   Third place finisher in 1996, Brian Scally, took the title with a sub-2:30 clocking.    Result:

And that is Joe’s report on the last of the Inverclyde Marathons.   It should have been recorded more prominently for its duration because it is clear that when it was properly sponsored, it was well enough organised to attrcat large fields, to attract quality fields and to host successful National Championships as well as international contests.   The flat fast course was ideal for fast times, and the layout was great for the spectators who could see quite a lot of the race (not usual for marathons!)   If anyone has any information to add about why there was a break of three years, we would like to hear it – although it was probably as Joe suggests due to ‘financial constraints’, as they say.