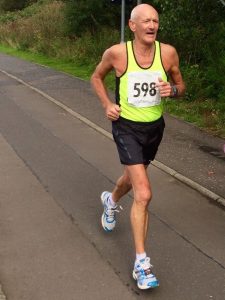 There was a local 3 mile race taking part in a nearby village and myself and my brother in law decided to give it go. I went for 3 training runs before the race and won it with my brother in law coming 2nd. I then heard about a running group that the council had set up trying to get the community active so went along. This is where my enjoyment of running through the woods started at the age of 35 and Moray Roadrunners were formed.

No, I just enjoyed the company and started to enjoy the improvement of my own running.

The feeling of fitness, racing and the camaraderie of other runners and supporters. I then started coaching juniors and this helped improve my own performances and gave a great sense of satisfaction.

All my Scottish and British Masters X Country medals but always behind Mike Hager (England).

I cannot remember ever having a really bad race. I only get out of the racing what I have put into the training.

I don’t really have any. I just want to be able to keep running and remain injury free.

I thoroughly enjoy my golf now that I have retired, trying to reduce my handicap which is currently 16. I also enjoy a bit of coaching, travelling and gardening.

Nowadays I’m happy if I can get out and just run! Injury has prevented me from proper training over the last 3 years so training is not as serious as it was 10 years ago. The body is not quite willing any more.

There is no set pattern to my training now. These days it consists of runs in the local woods that I have run in for 33 years. Usually 6/7miles steady.

Fartlek and speed sessions with the MRR.

I also try to fit in dreaded hills reps that I know have to be done!

The Editor added the following.

George Sim is renowned for being an elegant, graceful athlete who makes nearly all of the rest of us look bad by comparison! He has a great deal of talent and, as his training above shows, worked hard and intelligently to carve out a very successful running career. In addition, he has always been modest and extremely casual about his many successes.

When we first met in 1990, before the Scottish Veterans Cross Country Championships in Dumfries, I knew that my Aberdeen AAC clubmate Graham Milne (a former Scottish marathon international) had been training with George and rated him as extremely promising. Graham lived in Elgin and had convinced George, a near neighbour, to join AAAC since we had a good veteran team. George made an immediate impact by finishing 7th and we won team gold medals for the third year in a row.

George had just turned 40, having started running five years earlier. I was running quite well by 15 and so for a while, due to more background, had the edge on my new clubmate, who is more than two years less old. However his improvement was rapid – in fact it took him little more than three years to relegate me to the also-rans.

A few significant races illustrate this process: a ‘Veterans’ Mile’ in July 1991 on the posh Aberdeen track, when George was right behind me with half a lap to go but I tried extra hard while he glided in just behind my 4.38.8; a month later he thumped me in the Aberdeen Half Marathon; then the 1992 Scottish Vets Cross Country in Troon when I got some revenge by finishing second to his fourth and AAAC won the team title again; the 1992 Alloa to Twechar 8-Man Relay when team victory was almost assured because George rolled right away from Fife AC on Stage Six (the great Don Macgregor was impressed, saying ‘A classy runner’); in late 1992 I finished a couple of places ahead in the Forres 6. The last time I managed to beat him was in August 1993 when I almost gave myself a heart attack in the Aberdeen Half Marathon, eventually finishing five seconds ahead of George, with Shetland’s Bill Adams another seven seconds down. This three-way battle was for the SAF veteran gold medal at that distance. By 1994 the contest was over for me: George Sim was different class. I could only admire the stylish supremacy of such an athlete and make the most of races when he was in a younger age group or running elsewhere!

It was good that, despite many injuries, George was fit enough to be part of our M65 outfit in the 2016 Glasgow International, contributing to team bronze. Hopefully he will regain full fitness and go on to further fully-deserved successes.