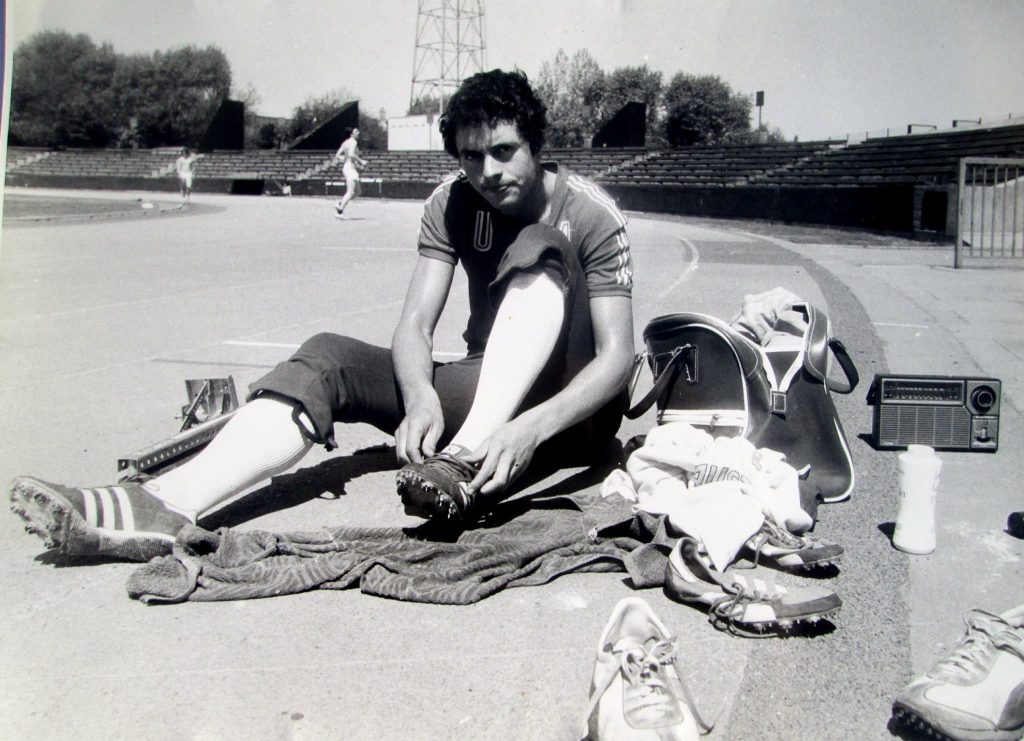 Peter Hoffmann was a very good runner indeed who represented Scotland and Great Britain with distinction.   He also knew his way around Scottish athletics and, training as he did at Meadowbank, he met and mixed with the professionals who also trained there.   I asked him for his thougts on the professional/amateur interface and his response is printed here in its entirety.

Brian, thanks for asking for my thoughts on the connections or links between amateur and professional athletics.

First of all I’m out of touch with both codes but from afar in 2019 it would seem we’re in a happier place where athletes can now compete together.

In arriving at this new open era and culture of glasnost many of the seeds for change were sown back in the 1970s and nurtured at Edinburgh’s Meadowbank Sports Centre.

I suspect too that the harbingers for change occurred at the grassroots level rather than in the more rarefied echelons and boardrooms of athletics officialdom.

Back in the 1970s some of the barriers were being broken down and there was a lessening of a silo mentality between the two codes.    I sometimes trained with the Pros at Meadowbank.

With some exceptions the main difference between the two codes was that in amateur athletics,  participants started at the same line or stagger and ran the same distance; whereas a handicapping system was at the core or heart of professional running.  And whilst you could make a case for the former being the more pure format there’s actually a very strong case for the latter being superior for both the athletes and as a spectacle for the public.

But in reflecting on the two codes I wonder if there was (is?) also a paradox at the heart of professional athletics compared to its sister sport.

In principle the sport is based on an approach (which interestingly partly overcomes some of society’s reservations and doubts about competition) on the notion that every competitor should in theory be in with a fair chance of winning or being there or thereabouts on the line – together at the finishing tape.

And yet we know that in practice this hasn’t always happened resulting in an interesting corollary to this which made the code generally different to its sister sport.

Whilst on the physio’s bench I heard many amusingly nefarious stories from the legendary and inimitable rubber, Denis Davidson, and his tales of athletes not trying throughout the season as a strategy to outfox the handicapper with a view to improving their marks and therefore their race chances with the schools disguising their charges’ true worth in order to make handsome monies from betting coups at the likes of the Powderhall Sprint on New Year’s Day.

I’ve enjoyed following the Memoirs of Professional Athletics Facebook page, making one or two occasional contributions. But at the outset I should say that I have no deep knowledge of the code but neither am I ignorant of it, with more than just a passing interface, interest and knowledge of the sport.

My interface was limited to a relatively small period of time between the years 1971 and 1978 at Meadowbank Sports Centre including not just athletes but also with coaches; rubbers (physios) and one or two bookmakers too.   I only ever attended one or two games – a couple down at Peebles but like many amateur friends we always attended the annual ‘Powderhall Meeting’ at Meadowbank over New Year.

I’m in the slightly unusual position of being able to not just make observations from the view in winter but can access the view in spring too where back in the day as a teenager and young man I recorded occasional impressions, reflections and thoughts as well as specific training details including sessions with some Pro athletes.

In the early 1970s Jimmy Gray and 3:57 miler Adrian Weatherhead regularly trained together.

These were often brutal sessions, usually involving 8 x 400 metres (1 minute recovery) in sub 60 seconds with Adrian and Jimmy knocking spots off each other.

Adrian had the utmost regard for Jimmy and is of the view that if Jimmy had similar opportunities then Jimmy would have been a sub 4 minute miler too. And don’t forget Jimmy was training after a full day’s work as a brickie.   A young Paul Forbes sometimes joined in these sessions and was left reeling.

In 1971/1972 two athletes from the great divide who had a mutual respect for each other were George McNeil and David Jenkins.

I believe that if the former been able to compete at the 1972 Olympic Games in Munich he would have won at least the silver medal in the 100 metres against the great Valery Borzov: and similarly if Jenkins had focused on training for the 200 metres (I believe he ran the wrong event (400 metres) in Munich) it would have been between him and Borzov too, especially over four rounds of competition. I recall how earlier in the year David turned up at the 1972 American Championships and finished second in the 200 metres event whilst in August at Meadowbank he ran 20.3 seconds a few weeks before travelling out to Germany.

David had the highest respect for George and they occasionally did a few sessions together.

In 1975 I think McNeil was past his peak but he was still an astonishingly good athlete.

5th April, 1975 ‘My final season as a junior augurs well as shown by today’s double session. In the morning I did some pure sprints with George McNeil.   He’s quite phenomenal.   I’m sprinting really well just now.  Earlier in February I won the Scottish 50 metres title and in today’s session I was running 10.5 speed. I’ve been bettering Drew McMaster and others in training and races and I was really pleased with today’s session.  So that’s the context. Well, George was taking 2 metres off me over 30 metres. Two metres! It was incredible to witness and be part of the session…’

21st April, 1975 The Edinburgh Holiday ‘…I wandered up to Meadowbank at lunchtime and ran a good session with a very powerful group of athletes – George McNeil; Roger Jenkins and Graham Malcolm…’

21st May, 1975 ‘…After lunch I popped up to Meadowbank; I was running well against George McNeil – 4 x 50 metres; I was given a 2 metres start; 6 x 50m this time starting level with George; standing starts; very encouraging on the second set – felt I was flying!…’

I also sometimes trained with Jimmy Smith who was an outstanding sprinter too. Jimmy was intending to compete in a different event over the longer effort of 400 metres at the 3M Pro Track and Field so asked if he could join in with Bill Walker’s squad.

26th May 1975 ‘…I ran another good session with the Pro, Jimmy Smith, who’s preparing to compete in the 3M Pro Track and Field Stars circus which is coming to Meadowbank. I like Jimmy – he’s a lovely bloke; I like his coach too, old Alf Nicol who’s a real character…’

18th June, 1975 ‘…Although I’m still a Junior athlete I’m heading off to East Germany tomorrow with the British senior team for the first time. In the afternoon I did some speed-work with Les Piggott and Scott Brodie; Piggot is an interesting and enigmatic individual. He’s quiet but confident and self-assured with definite views on the world.   Later on I met Alison at Meadowbank to watch the 3M PRO meeting.  It was an interesting experience and the spectacle was presented with flair and razzmatazz compared to the amateur fayre, but many of the great athletes on parade are past their best.   Ben Jipcho ran well over two miles; George McNeil was a close up third to the top Americans but was running below his best; I’ve been training recently with Jimmy Smith and helping him out but was disappointed with his run in the quarter…’

7th July 1975 ‘…After playing an hour’s football at Gullane yesterday my legs above the knees are shattered; that’ll teach me to show off; old habits die hard. Come the evening the soreness had worn off a little so I trained with Roger and George McNeil…’

Training with George and Les in quick succession and proximity gave me an insight into both of them and despite my great admiration for Les being a double-Olympian I have no doubt who was the better sprinter and athlete. 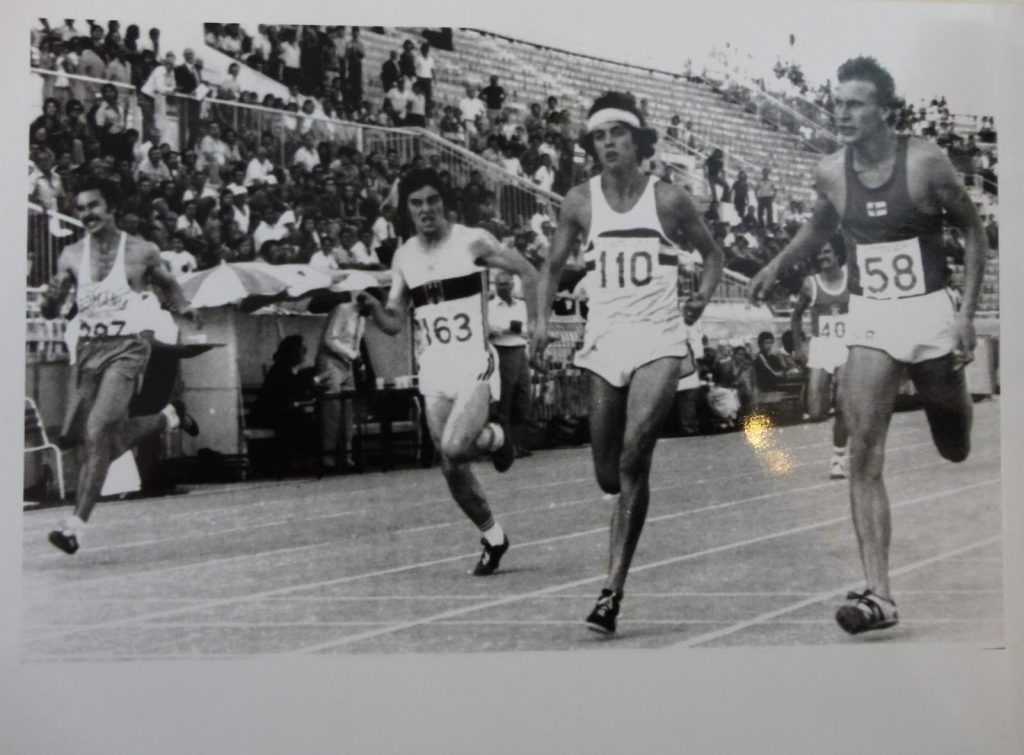 After half a lifetime isn’t it wonderful to see the great strides that have been made to bring the two sports much closer with athletes now training and being able to compete together.

And from the view in winter I’m still a fan of the handicapping system even if occasionally the principle doesn’t always equate to the practice!’