The Hawkins brothers have both enjoyed tremendous success, in Scotland, Britain and elsewhere. Hopefully, their careers will continue to flourish.

His WIKIPEDIA entry tells us :

“Derek Hawkins won the Scottish cross-country championships in 2011 and 2012. In 2012, he ran his first marathon, competing in Frankfurt and finishing in a time of two hours 14 minutes and four seconds.

At the 2013 London Marathon, in his second competition over the distance, he was the highest placed British athlete, finishing 13th in 2.16.51. This result qualified him for the 2013 World Athletics Championships, but Hawkins decided not to compete in Moscow, in order to focus on his preparation for the 2014 Commonwealth Games.

Hawkins competed at the 2014 Commonwealth Games, held in Glasgow, Scotland, representing the host nation in the men’s marathon. He finished 9th in a time of 2.14.15, 11 seconds slower than his personal best, but was the highest finishing British athlete in a race won the Australia’s Michael Shelley.

At the 2016 London Marathon, Hawkins finished 14th overall, and was the third British-qualified athlete to finish in a personal best time of 2.12.57. This time was inside the qualifying time of 2.14.00, needed for the 2016 Summer Olympics to be held in Rio de Janeiro, Brazil but, as he was outside of the top two British finishers, he did not achieve automatic selection for the Great Britain team. He was later chosen as a selectors’ pick for the Games and was joined in the men’s marathon by fellow British athletes, Tsegai Tewelde and Derek’s brother Callum “

(Unfortunately, hampered by a recurring injury, as well as hot and humid conditions, Derek had to battle very hard just to finish the Olympic Marathon in 2.29.24. Tsegai Tewelde dropped out.)

2009: Career really took off. He won the U20 Scottish National XC (4 secs clear of Tsegai Tewelde)

2010: 3rd in Scottish Senior National XC; April ran the World University CC in Canad; U23 ran for GB in the European CC in Portugal.

At Bangor, Wales in 2009, he won the Home Countries Junior XC match and led Scotland to victory over England and Wales.

In 2012 at Giffnock, Derek Hawkins won the Home Countries International and led Scotland to team victory against England and Wales.

At Glasgow in the 2014 Commonwealth Games Marathon, Derek finished 9th and First Briton in 2.14.15.

In the Under-17 category, he was second in 2005 and Kilbarchan won.

In the Senior event, Kilbarchan (including Derek) secured bronze medals in 2008.

In the Senior event, Kilbarchan (including Derek) won the title in 2015. 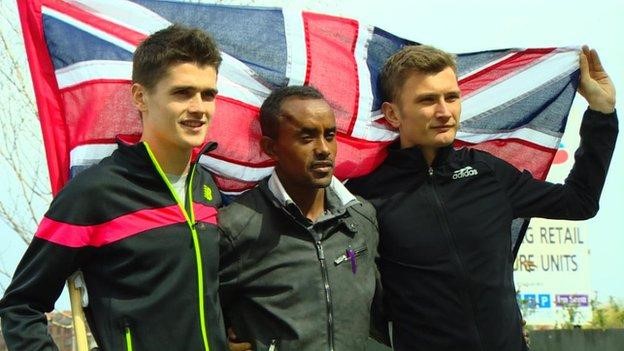 (BBC SPORT reported on the 26th of April, two days after the London Marathon.)

“Derek Hawkins had a nervous wait to find out if he would be a selectors’ pick, he told BBC Scotland: “I was in my bed when I got a phone call early this morning; I was elated.

“When I crossed the line, I was the third Brit and just out of the automatic selections, but I ran a PB and you feel that you have justified your selection.

“But it is a matter for the selectors, so it out of your control and you are sitting there thinking for a couple of days.”

Callum Hawkins, 23, finished eighth in the London Marathon in a new personal best of 2:10:52 and hailed it as a great achievement for their father, Robert, who is also their coach.

“Before Sunday, he was a bag of nerves and probably more nervous than us,” he said. “To get us both in is huge.

“To have your training partner and brother in the same race at the Olympic Games is going to be unbelievable.”

Asked what his target would be in Rio, the younger Hawkins said: “In a perfect world, top 20, but it is going to be really tough and conditions are going to be pretty tough – something I’ve never experienced before in a marathon.”

Tsegai Tewelde, a Glasgow-based Eritrean who claimed asylum in Britain in 2008, ran 2:12:23 to finish 12th in what was his first marathon.

It caps a remarkable story for the 25-year-old, who still bears the scars on his forehead from a landmine that exploded next to him when he was eight, killing his friend.

“It’s massive for me,” said Tewelde. “It’s exciting to be part of the British team and I’m very happy.”

Callum Hawkins in the 2016 Olympic Marathon

This is only the introduction:

“Callum Hawkins is a British distance runner, who competed in the marathon at the 2016 Summer Olympics. He is the Scottish record holder in the marathon and the British all-time number three at that distance behind Mo Farah and Steve Jones. Hawkins is also the all-time Great Britain number two (and European all-time number six) in the half marathon. He is the Great Scottish Run course record holder and was the first British man to win that event in 23 years.” 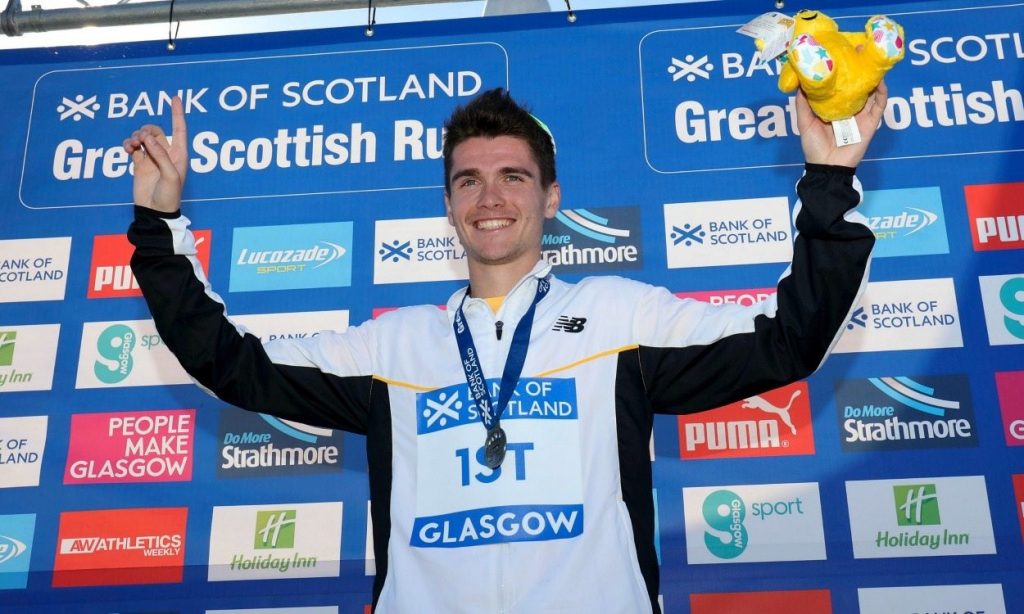 One Scottish Senior International vest for Cross-Country at Drogheda in 2010. Callum finished 5th, one second behind Derek. Scotland lost to USA and Poland but beat Ireland, Wales and Finland.

Kilbarchan AAC won the Under-15 team title in 2006, when Callum was fifth; team silver in 2007, but Callum won individual gold.

In the Under-20 category: in 2010 Callum won individual gold and team silver.

Kilbarchan (including Derek and Callum) won the title in 2015.