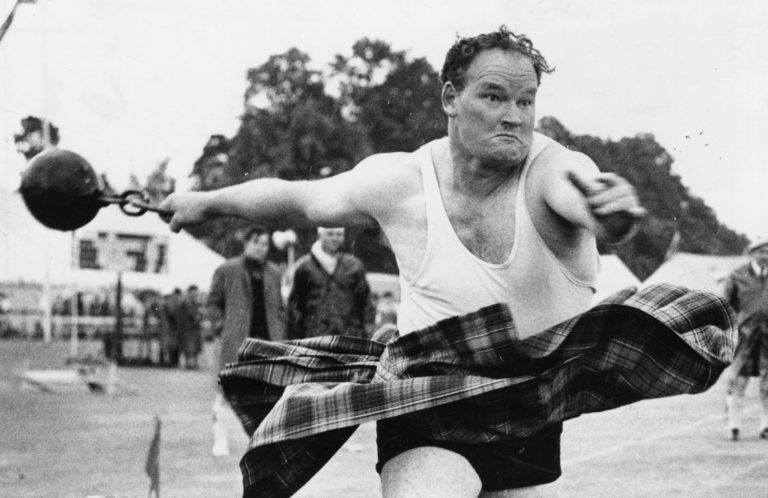 The 1960 Gathering held the Games on a dull but dry day when a huge crowd of 30, 000, biggest for several years, watched the spectacle and the sports.   The Queen, Prince Philip, Queen Mother and Princess Margaret were all present along with the royal children, Prince Charles and Princess Anne.   Charles wore a kilt in the Balmoral tartan designed by Prince Albert over 100 years ago.   Eleven pipe bands took part in the march past.     The royal family was there in big numbers, the spectators were there in numbers, the pipers and marchers were there and the rain stayed away.    That left the athletes to do their thing.   This time the star was Bill Anderson.

More about Anderson below but first, the results.

Lots of very good athletes there – Tinnion in the middle distance races, Gray and Sutherland among the heavies and of course Scott in everything.   But Bill Anderson was top man in the throws.    One of Scotland’s best ever Highland Games competitors – and not just in the heavies.    Scottish Games spectators and aficionados in the 1950’s and 60’s were spoiled with athletes like Jay Scott and Bill Anderson to see in action.   Then when English champion and record holder, Olympic athlete to boot, Arthur Rowe came to Scotland to try his luck there were many, many superb duels.     The 1960’s was the decade when the Rowe v Anderson duels (with guys like Henry Gray, Sutherland and others interupting their progress) attracted crowds to the Games across Scotland.     Geoff Capes, another Olympian who came and contested the heavy events in the Games, reckoned that as an amateur Anderson would have been an Olympic medallist – not just a competitor but A MEDALLIST.   Have a look at these results at Braemar and remember that they were competing pretty well every week of the summer season, often more than once in a week.   In 1961 at Braemar, Anderson won the Silver Cup as the leading heavy after he had won the 16lb ball putting, the 28lb ball. the 61lb Hammer, and the 22 lb hammer, all on the day after dominating the Aboyne Games.   Rowe arrived in 1962.   Rowe on the left in blue, Anderson on the right in black, only wins at the Gathering included..

There were lots of marvellous duels fought out – as often as not when one won, the other was second.   At one meeting both men tossed the Braemar Caber – 19′ 9′ long and 132 lb.   In 1969 Anderson and Rowe were given first equal for the Caber and for the Weight over the Bar.   There will be more about Anderson in future posts, especially in 1987 when competed for the last time.