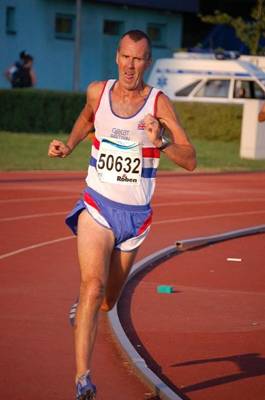 These are some races/years that stand out as important to me in the 2,400 plus races I have competed in over the years, not always major competitions, but events that tickle my own motivations.

1979:   First of my four wins in the Northumberland Coastal Run gaining me local .notoriety’.   The race was declared the most scenic in the UK two years ago and I was event organiser for over 20 years.

Team gold with Morpeth arriers in the North Eastern Championships, first win in 15 years, I was also in the 1982 team.

2005:   Ran 16:40.51 in the World Masters in San Sebastian, reckon this was the last decent time I have achieved, although age graded might indicate otherwise.   Silver team medal with Morpeth in the North East Counties (Northumberland, Durham, Cleveland) individual/team medals in four decades – 1970s, 80s, 90s, 00s.

2007:   Second team gold for Scotland in the Masters Cross-Country International in Belfast.

A.   All Time Personal Bests

Archie still has 2 years to go as an M55, ran in 30 countries, hopingto add another 4 by the end of the summer, not chasing Ron Hill!   Do not intend packing in but for the dreaded injuries.