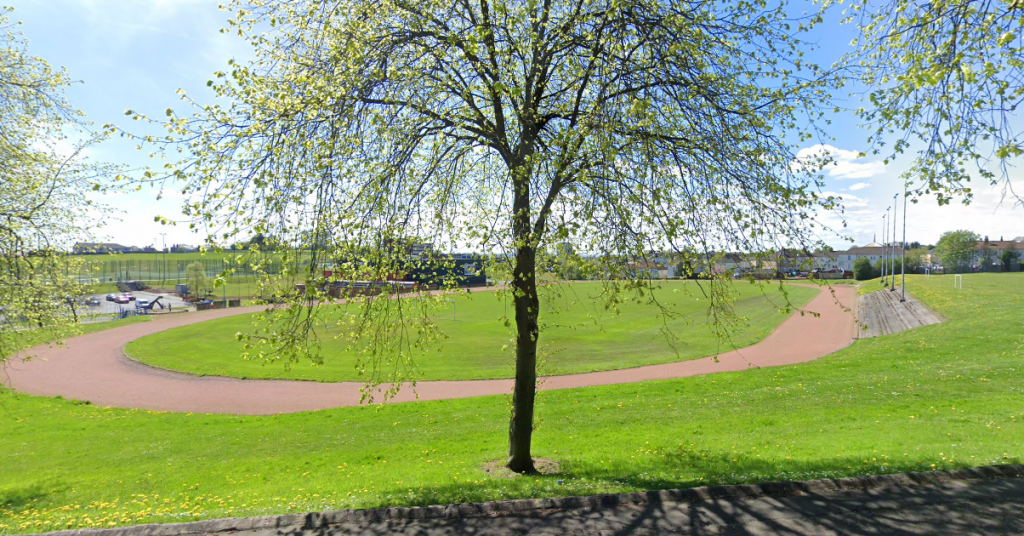 Coatbridge and Airdrie hosted many very attractive meetings in the 1970’s and 1980’s – many were cross-country championships in Coatbridge and there was the excellently organised Highland Games at Rawyards cinder track in Airdrie.   All were well sponsored which helped but the events were what the athletes wanted and very good competitors were always to be seen across the programme.    Joe Small has provided the following information about the meetings.   He comments that the road race, billed as 13 miles, was possibly under distance: all that can be said on that front is that the trail used for it included 4 mammoth hills which made it 13 miles worth of effort!

The town of Airdrie in central Scotland might seem an odd place to hold a `highland games’, but it followed in a tradition of other similarly located places hosting such events, e.g. Shotts, Kirkintilloch, Kilsyth, Bathgate etc.   The forerunner of the games was an Airdrie Town Council open sports day held on the 3rd June 1967 at the newly opened Rawyards track.   The principal organiser for the games was Neil Taylor, secretary of Airdrie Harriers who almost single handedly made sure that the event carried on.   The new 440 yard cinder track was constructed at Rawyards on the outskirts of the town, previously a brickworks and area of waste ground, although it did have some sporting history as a site of a race course in the mid 1850’s. The horse racing only lasted for some 25 years before disappearing, seemingly due to lack of local interest.

The first sports meeting in 1967 included the usual mixture of mens and womens scratch and handicap races, heavy events and schools relay races. The best performance noted at that meeting was a 2 mile win by Bert MacKay of Motherwell YMCA in 9min. 23sec., 15 yards ahead of of clubmate Alex Brown.    For the record, the Glasgow Herald report and results are below.

1968 saw another open sports meeting on the 1st June. The star of the meeting being Ian McCafferty, competing for Law & District, who won both the handicap mile (off scratch) in 4min. 11sec. together with the 2 miles in 8min 42.4sec, this time was only 0.2sec outside of his own National record.   Hugh Barrow of Victoria Park won the invitation 3/4mile race in 3min 0.5sec. This equalled his own Scottish record.   The complete results were 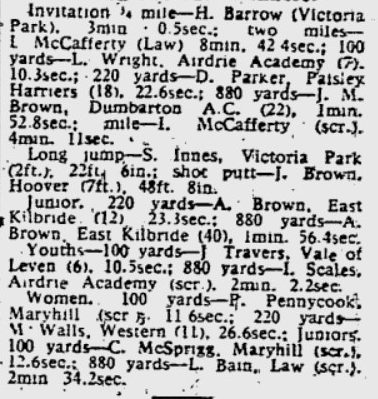 Among the notable athletes other than the two already mentioned above are sprinter Derek Parker of Paisley who went on to become a level 4 middle distance coach with Kilbarcham AAC and Jack Brown of Dumbarton AAC but the women’s winners included internationalists, SWAAA champions and record holders and Commonwealth Games athletes Moira Walls, Pat Pennycook and Christine Sprigg. 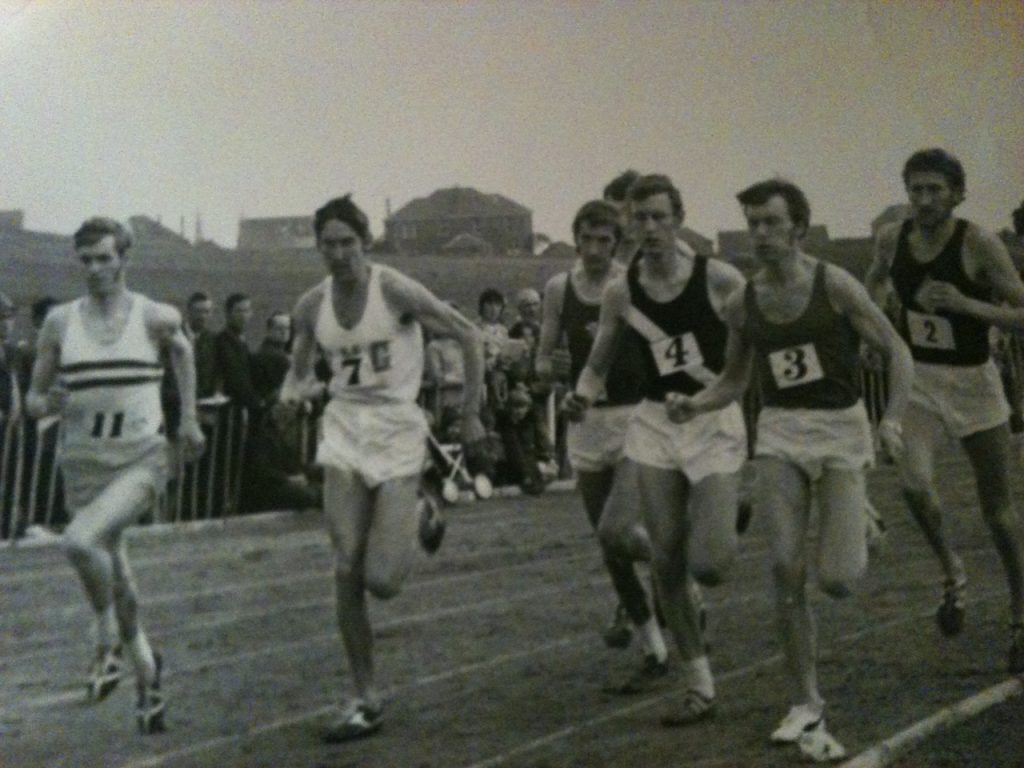 Putting on rarely run events appears to have been something of an Airdrie speciality. Invitation races over distances such as 3/4 mile, 1000 and 2000m, with the intention of producing fast times and possibly records were always part of the days programme. The organisers were quite successful with this strategy, the 2000m time of 5min. 12.8sec. by Lawrie Spence in 1976 still stands as a Scottish native record for the distance. Other records set were a Scottish All Comers and Native record of 2min. 23.3sec. for the 1000m by Graeme Grant in 1971 and an earlier 2000m record of 5min. 20.8sec. again by Lawrie Spence in 1975.

In 1968 Local lad Ian Scales (Airdrie Academy) won the youths 880 yards from scratch in 2min 2.2 seconds. Ian went on to be a good class 800m runner, finishing 3rd in the S.A.A.A. championships over that distance in both 1971 & 1972. He was one of the few top runners Airdrie Harriers managed to produce.

The road race was also a feature. Billed as a 13 mile event, I don’t think it measured much more than 12 miles, so the times always looked much faster than they actually were. The trophy presented to the winner was named in honour of J.M. Kerr, a former Scottish marathon champion & member of  Airdrie Harriers. The race always attracted a good field, with winners such as Jim Dingwall, Willie Day, Colin Martin, Sandy Keith, Alex Wight (and myself!)    There was only one mishap in all the runnings of the race on what could be in places quite busy and that was in 1969 when Peter Duffy was involved. 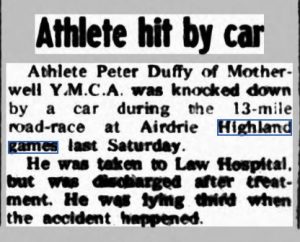 The Games were a very good advert for the new Law & District AAC when they were held on 7th June in 1969     The report from the Wishaw Press the following Friday read as follows. 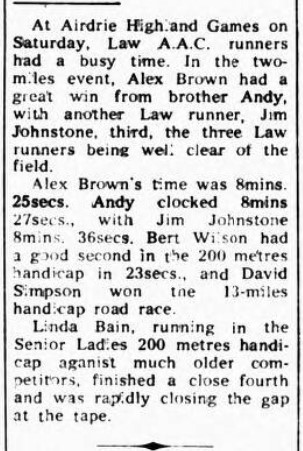 If the 1969 meeting was a triumph for one club, the results on 30th May, 1970 showed a wider share of the spoils with the calibre of athlete on show very high indeed.   The headlines were grabbed by Lachie Stewart who won not only the 3000 metres race but also the Invitation Mile.   In the former he defeated Shettleston clubmate Dick Wedlock when he won in 8:26.2 with Monklands Harrier Jim Brown third (8:40.0).   He led from start to finish in the Mile, coming through the half in 2:13.5  and again defeated Wedlock in a winning time of 4:18.4.   Ian McCafferty conceded 120 yards to John Graham (Airdrie Harriers) – it was a bit too much and he had to finish second (3:53.4) to Graham’s 3:44.0.   Results: 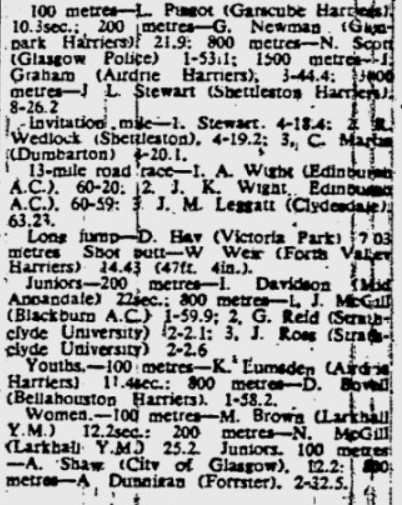 Among the other results, Les Piggott won the 100 yards  and the 13 miles road race, which had almost 60 starters, was won by Edinburgh AC’s Alex Wight in 60:20 from his brother Jim Wight (60:59) with Ian Leggett of Clydesdale third 63:24

5th June 1971:  was the date for the next meeting which had two invitation events on the programme.   Both were middle distance races and both had really top class athletes contesting them.   All of the prize winners were Scottish and British international athletes.   In the 1000m, Graeme Grant of  Dumbarton running for Heriot Watt University was a late entry but won the race in 2:23.3 which equalled the national record for the distance with Frank Clement second (2:24.4) and Dave McMeekin third (2:25.3).   In the Mile local runner Ron McDonald of Monkland Harriers won in 4:04 from Adrian Weatherhead of Octavians (4:04.6) and Hugh Barrow of Victoria Park (4:11.7).

In the other events, Shettleston won the 5000m team race with Wedlock 2nd, Bannon 3rd and Summerhill 6th from Clydesdale (Dolan 5th, Gemmell 7th and McAusland 15th, with Bellahouston 3rd.   A high quality race with 10 teams of four taking part.   In addition,   Willie Day of Falkirk Victoria won his third road race of the season in 61:49.   The results below indicate that this was a well supported meeting with top class athletes all the way through the programme. 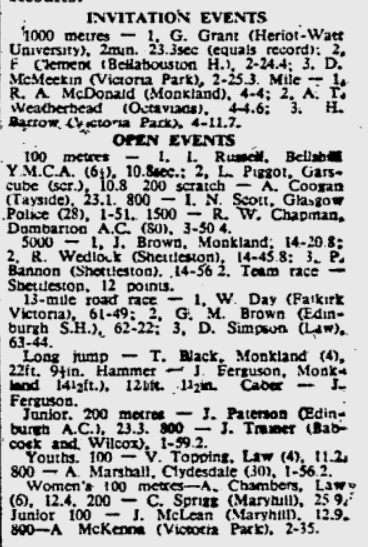 The first Saturday in June in 1972 was the 2nd of the month and the report in the local paper was brief. 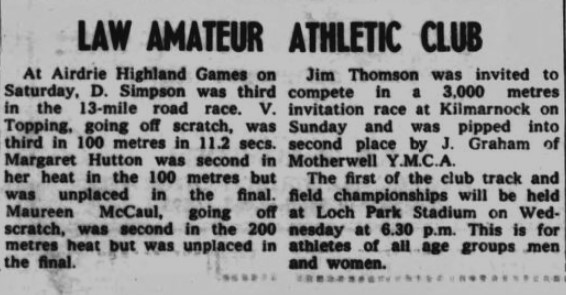 The 1973 Games were held on 2nd June and Les Piggot of Garscube won both 100 and 200m quite comfortably having overhauled the field from scratch by halfway in both races.   Given that it was a fast track if we go by the times recorded in all the races, it is maybe a pity that there were not as many invitation sprints as there were invitation middle distance races.

The road race was of the by-now usual high quality.   The first six were Colin Martin of Dumbarton, Colin Youngson of Victoria Park, Willie Sharp of Falkirk Victoria, Ron Paton of Clydesdale Harriers, George Brown of Edinburgh Southern and David Simpson of Law.   Willie Sharp was always a an astute pacer of a race and this course with its long uphill drags and sharp descents had many ‘graveyards’ that could spell the end of a runner’s hopes: Willie not only placed third but was also winner of the handicap.   Willie McBrinn of Monkland won the veterans race.    The results as published by the Glasgow |Herald were as follows.

In 1974  Airdrie Highland Games were held on 1st June and the short report in the Wishaw Press of Friday 7th June, indicated the successes of the local athletes in the article below but there was no long report on the event at either the local or national press.   . 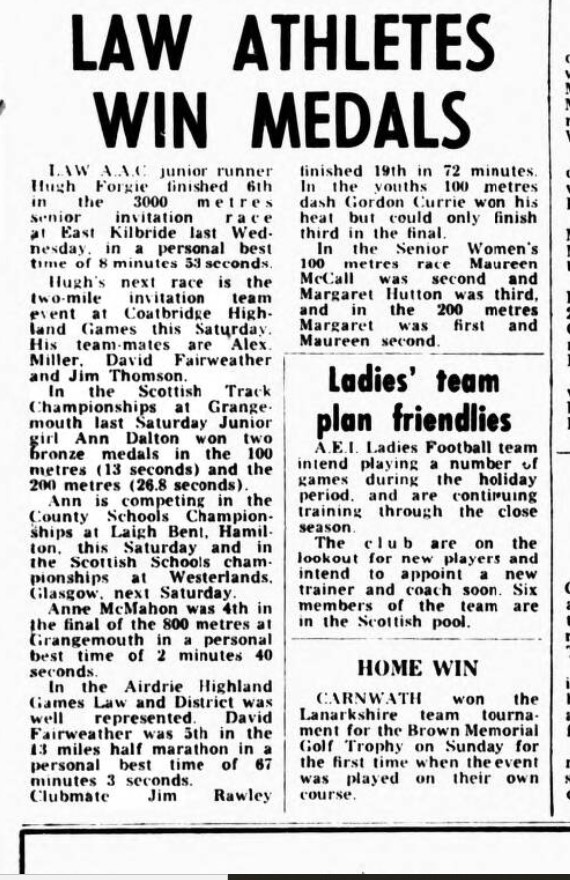 The meeting may have been slightly upstaged by a meeting held exactly one week later – the Coatbridge Highland Games were held just a few miles down the road in Dunbeth Park with a promise of a grant meeting a year later at a new all-weather track at Langloan, just a short jog away.   See the extract from the Herald report below. 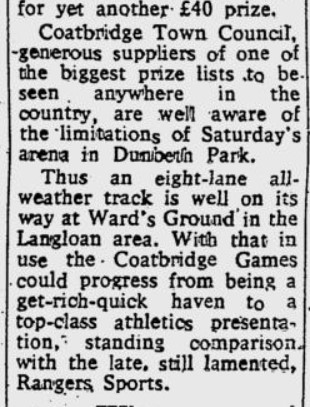 7th June 1975:  was the date for the next Airdie meeting and the invitation 2000m was the event of the day.   Les Piggot missed the meeting because of illness but the presence of the Stuart Hogg trained Drew Harley meant that the sprints  again had some real class.   The Glasgow Herald repost is below. 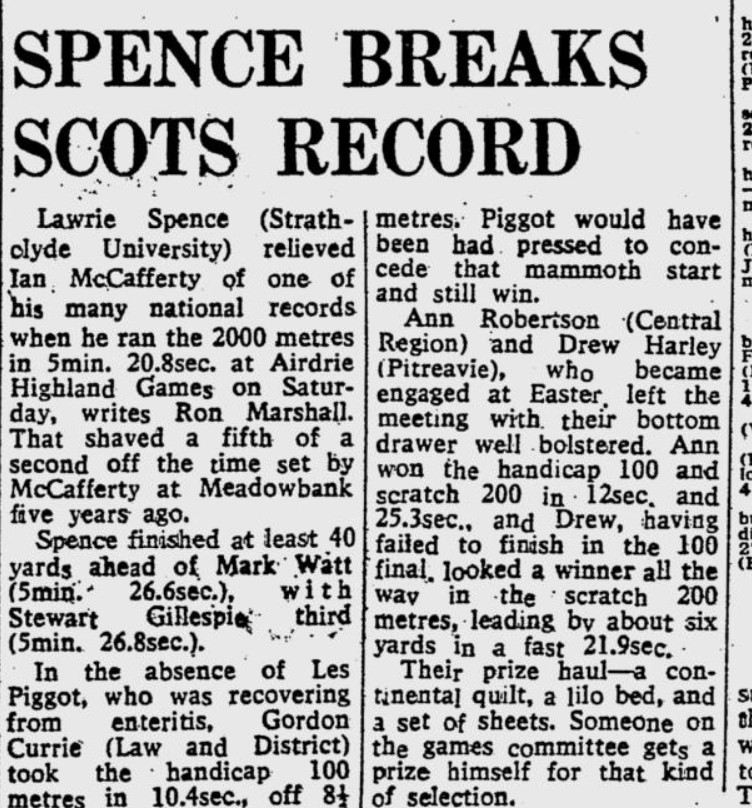 The Games were again held on the first Saturday in 1978 and the short report in the Wishaw Press covered only the Law & District AAC runners. 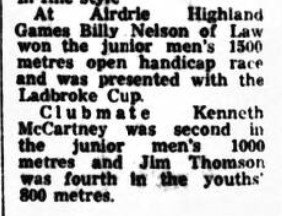 The 1979 meeting was reported at some length as follows.. 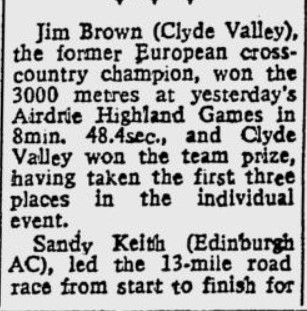 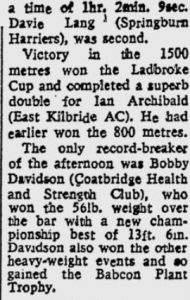 The Games were held again from time to time in the 1980’s but their heyday had been in the 1960’s and 1970’s – like the other athletics events held in the area at the time it had been well organised an popular and its demise was a loss to the Scottish athletics scene.