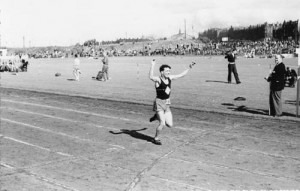 Alastair NEAVES  Aberdeen AAC
1982 10000 34.30.0; 1982 Mar 2.34.59.
Ally was a talented young runner who ran the E TO G in 1971, when the team finished 7th. He gained two places on Stage 8. In 1972, aged 20, he was faced with the exhausting challenge of the John o’Groats to Land’s End Relay – and eventually AAAC became the second-fastest ten-man outfit to complete the journey. However, they were fastest North to South. In 1973, Alastair featured in the Aberdeen squad that succeeded in breaking the record for the (ironically named) JOGLE. Later on, Ally was the social spirit of Metro Aberdeen RC.

Top Scottish Marathon Man in 1954 (three times in the ten fastest for the year) and contemporary of Joe McGhee.

David NELSON  Motherwell YMCA Harriers
In 1951, David finished third in the Scottish 6 Miles championship. Then in 1952, having won the Scottish Junior National XC, he ran for Scotland in the Senior International championships, and was a team counter in an impressive 29th position. He ran the 1951 E to G for Motherwell.

Kevin was a good runner who was at his best on the roads as his fastest time on the last stage of the Edinburgh to Glasgow in 1985 showed.   It was his first run in the race and his second run, while also a good one, didn’t quite match up to it.   He ran cross-country too and his best run there was his ninth in the youths event in 1984.  A combination of injuries and studies took him away from the sport just as he was starting out as a senior.

Leslie NICOL, Metro Aberdeen RC
Les came to the sport very late but this cheerfully tough Aberdonian sparrow had real talent and thoroughly enjoyed his success. In the Scottish Masters XC championship, he won the M70 title in 2010. In 2012, 2013 and 2015, Les added three M75 titles. For Scotland, Les ran consistently well in the British and Irish Masters XC International: contributing to three M70 team silver medals, in 2006, 2007 (when he finished 4th individual and first Scot) and 2009. Les won individual bronze (M75) in 2014, leading Walter McCaskey and Bill Murray to team bronze. In 2018, recovering from injuries and race-training over a hilly Aberdeen parkrun, Les triumphed in the British Masters XC championships in Forres, winning a well-deserved M80 title.

Charlie was a local hero in Aberdeenshire. He ran every Aberdeen Marathon from 1979 to 1990; and did well in countless road races. In 2001 Charlie became the Scottish 100km champion; and ran for Scotland in the Home Countries 100km event. He was third in the 2002 Speyside Way 50 km trail race. He secured two silver medals in the Scottish Masters Cross-Country championships: M50 in 2001; and M60 in 2016; and Aberdeen finished second team in 1991. He featured in winning Aberdeen Veteran teams in the 1991 and 1992 Alloa to Bishopbriggs (or Twechar) Relays. Running for Scotland in the British and Irish Masters XC International, Charlie contributed to M50 team silver medals in 2001.

Cyril was an Irish runner of great ability who lived and ran in Scotland for over 25 years taking part in both Edinburgh to Glasgow and Scottish National championships where his best position was sixth.   His daughter Moira also ran for both Scotland and Ireland.

A good club standard runner who was also a good hill runner.

Henry O’NEILL   Victoria Park, plus Bellahouston?
In 1947, for VP, Henry won a bronze medal in the Scottish 3 Miles championship. In 1948, ‘B’ O’Neill ran in (his new?) Bellahouston team that finished second in the Senior National XC. By November 1949, H O’Neill was one of the Bellahouston Harriers who finished third in the E to G. 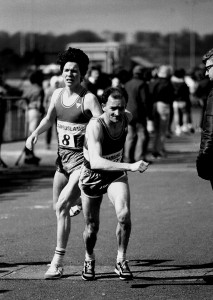