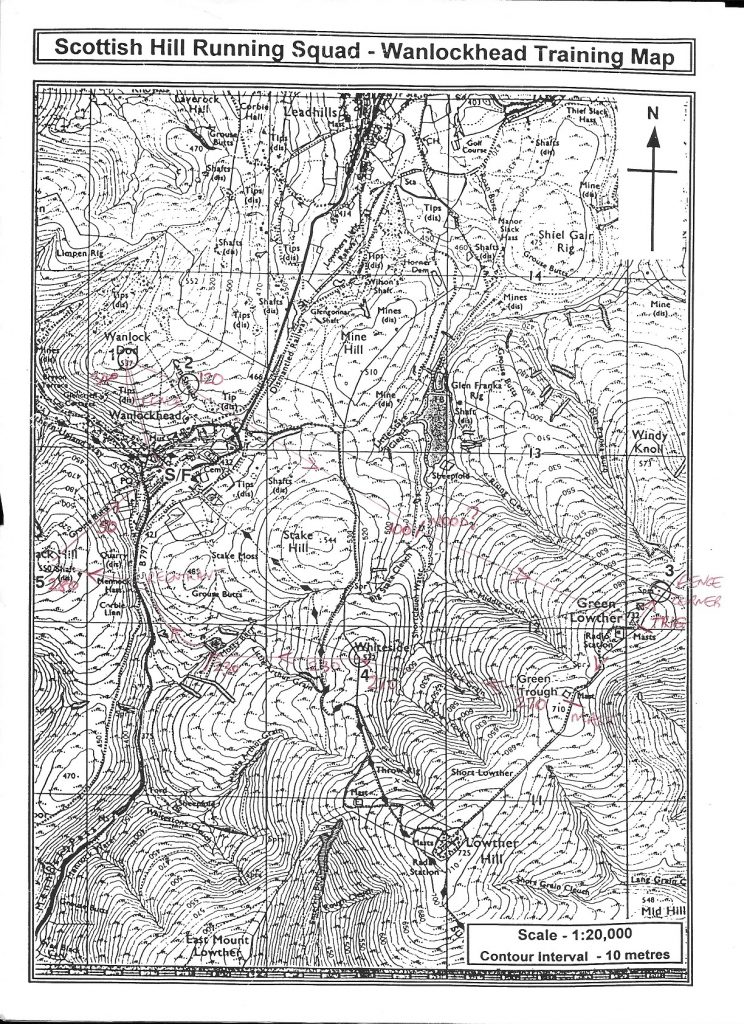 The range of people interested in and involved in hill-running is wide: there are races for Under 16’s and there is no upper limit as far as ages are concerned.   There are races for beginners (there are frequent articles in hill running journals and magazines by and about the pratfalls and pitfalls of a hill-running neophyte) and for the elite.   The sport was developed in several ways.  There were weekend gatherings aimed at the elite but open to all.   They were held all over Scotland and the cost to the attenders was as low as possible, and lifts to and from were offered where possible.   We asked Denis Bell for more information.
“These were all largely down to Martin Hyman.   Martin was a superb organiser and a stickler for detail and whilst these ‘coaching weekends’ were really targeted towards the ‘elite runners’, they actually appealed more to the ranks and file .   Few of the elite joined up, but 80% of the attendees were excellent club members, experienced runners, and then the shades below towards novice.    To begin with we had juniors and seniors, and the events worked fine, but as expected, became a bit polarised between seniors and juniors.   Nonetheless the affiliations, camaraderie etc were bedrocks.   We soon determined to split off the ages and ended with seniors and juniors as separate events and these were all in my opinion ‘great successes’…Wanlockhead, Comrie Croft, the Scout Station at Lochearnhead, maybe Dalbeattie, the Scout Centre, near Hillend, and Glencoe I think (and definitely there were a couple ‘further north’).  I probably missed a few!
These were typically getting 30-40 seniors,  and separately c20 Juniors, and lasted from gathering Friday evening to departing mid afternoon Sunday. People travelled far and wide and again paid little to participate (£15 perhaps).  All the grub and drinks were provided by the organising team (this indeed was also the format for Will’s Bothy…provision of labour on the project (a couple of days..) and then the Will’s Bothy Relay afterwards….more ad-hoc as Martin arranged days to get down to get on with the workload  ( turning a pretty dilapidated ruin into a very habitable 2-floor Bothy)….again people travelled from far and wide to help.
The format of the Coaching weekends, was planned efforts, classroom-discussion sessions and also efforts out on the hills.
The class stuff was about keeping healthy, eating and drinking, injuries, preparation for events and racing, mountain craft and orienteering, training routines etc…we also set up personal training plans for the future….and then just generally shared experiences.  Some of the ‘lecture’ work was ‘formal presentation style’ in an open inclusive forum. We had invited guests sharing their experience with us and sharing ‘informed’ approaches in terms of coaching…SAL or active and well known in ‘athletics’…
We all could, were encouraged to, pitch in and have our say, do our bit.
We had ‘relay’ events and then did wider ranging into the hills. Wanlockhead was superb, very early in the year (2nd weekend Jan).. Varied weather over the years, etc. Other events at the places noted above took place at other times of the years and were well advertised to be planned in to our personal calendars.
These were a super success both for seniors and juniors, as affordable and smartly organised, and innovative approaches over diverse locations, where we tried to be inclusive to the fraternity beyond the Central Belt…   Malcolm Patterson took on a lot to do with juniors and we generally expanded interests by seniors, women and juniors..   I’d say our membership strengthened and grew, and all gained benefit, although of the top elites attended.
In my early years 200max members (SHRA)…later on by 15 years progression probably 600+ members .
*
As an illustration of these weekends, we have some of the documentation from the Wanlockhead weekend in January 1996.   The map used is at the top of the page, but first have a look at the schedule for the weekend.    Having been advertised beforehand, including a ‘last minute plug’ in the Scottish Hill Runner magazine for October 1995, applications received and Christmas celebrated, the attendees arrived and were given the following timetable.   Some had taken the option of travelling down the night before and staying in Wanlockhead, some had accepted the offers of lifts from others going there but all had the same weekend programme. 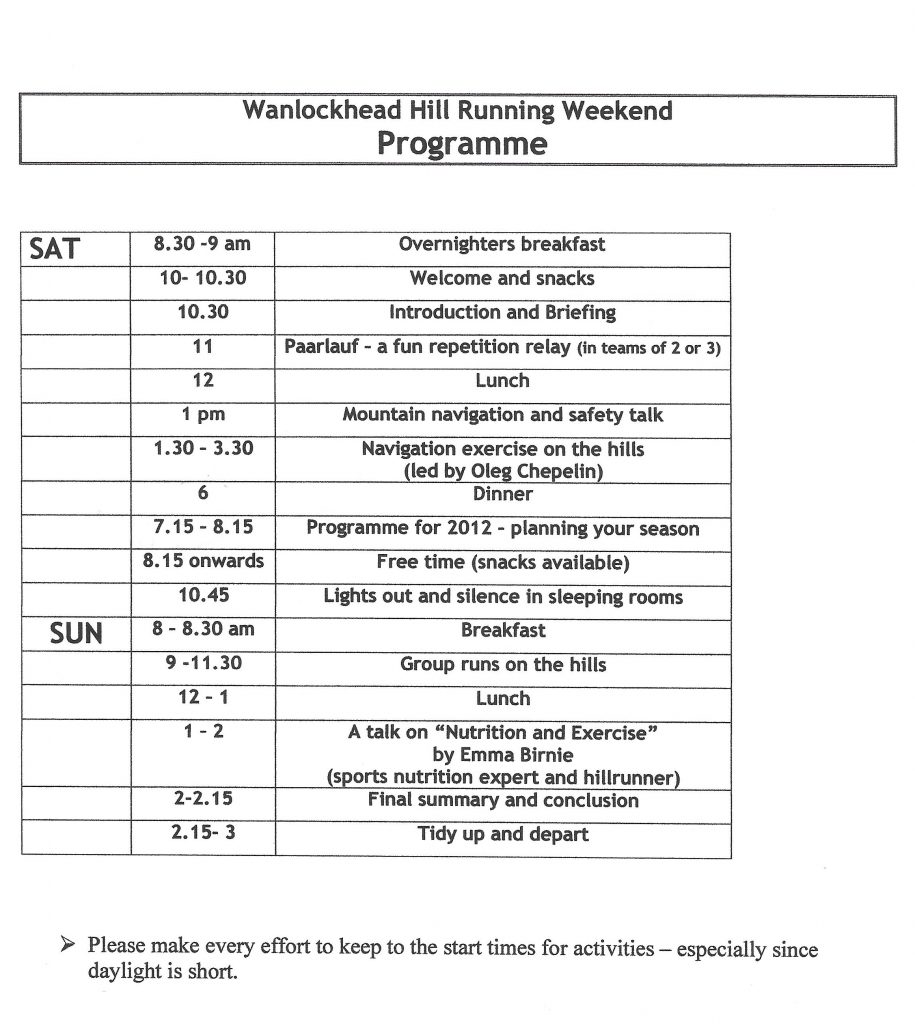 Attached to this information sheet was a list of participants with their details which included their name, phone number, where they were from, whether and how much they had paid and notes which included their age if they were juniors.   At this camp, there were 16 juniors and 26 seniors; 15 females and 27 males.   There were seven staff members.  These were Malcolm Patterson who was a run leader; Mags Turnbull head caterer, Edel Mooney helper and coach, Oleg Chepelin who was an orienteering coach, Jill Horsburgh Caterer, Denis Bell Coach and Martin Hyman who was noted as ‘Wise Old Man’.    The weekends were always successful but while talking about Squad Weekends, the Juniors were not left out: how could they be when they had been doing so well on the international scene in the early 90’s?   Staying with 1996, there was a very good one at the Comrie Croft Bunkhouse, between Comrie and Crieff.   The review below is from the ‘Scottish Hill; Runner’ of June 1996. 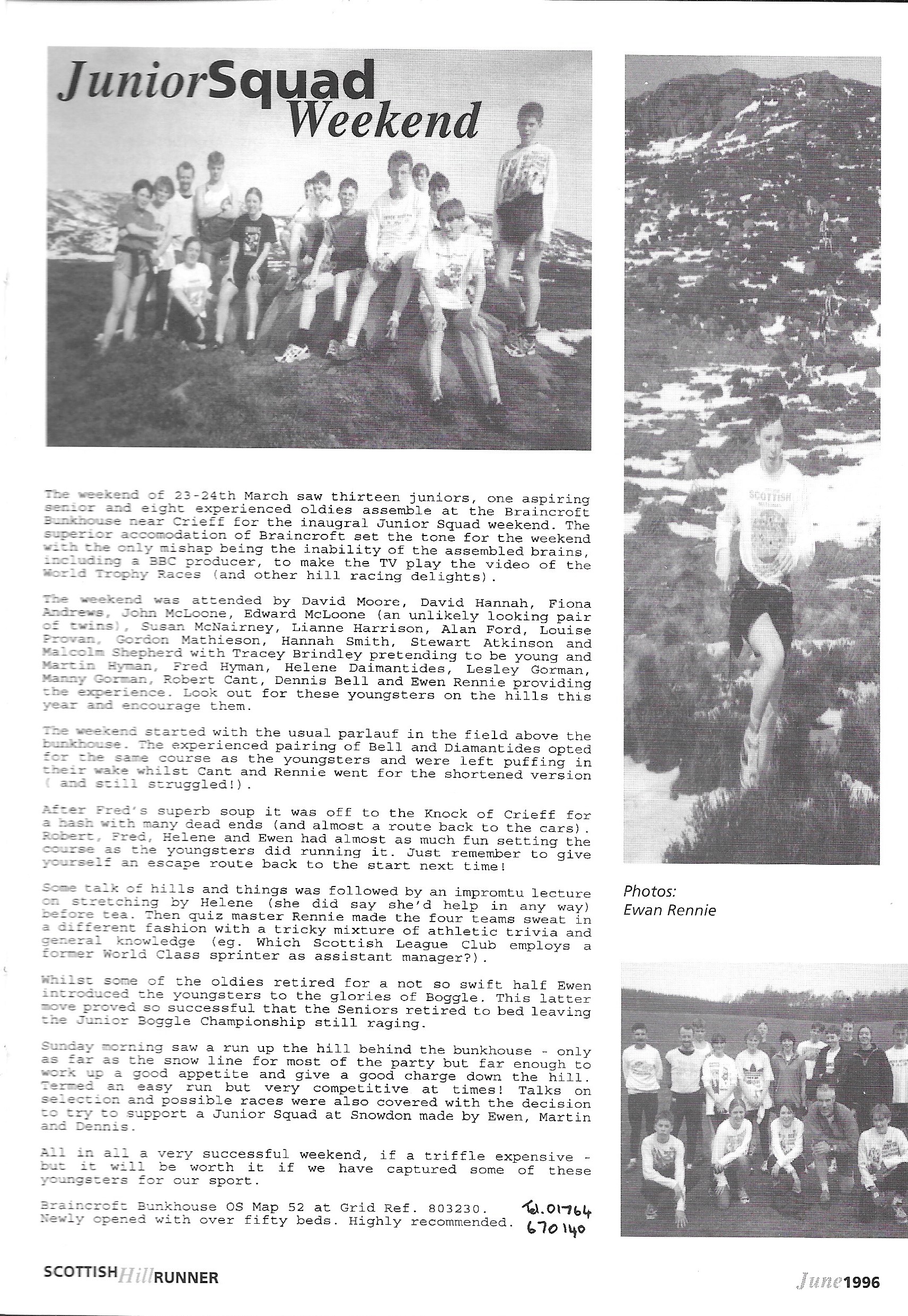 Senior Squad Days and Junior Squad Days in a variety of locations covering the country and all very successful.   If you put them together with such as  the Come and Try Days put on by Christine Menhennet then you have a sport that was catering for all: a recipe for success.
This website uses cookies to ensure you get the best experience on our website.Learn More Got It