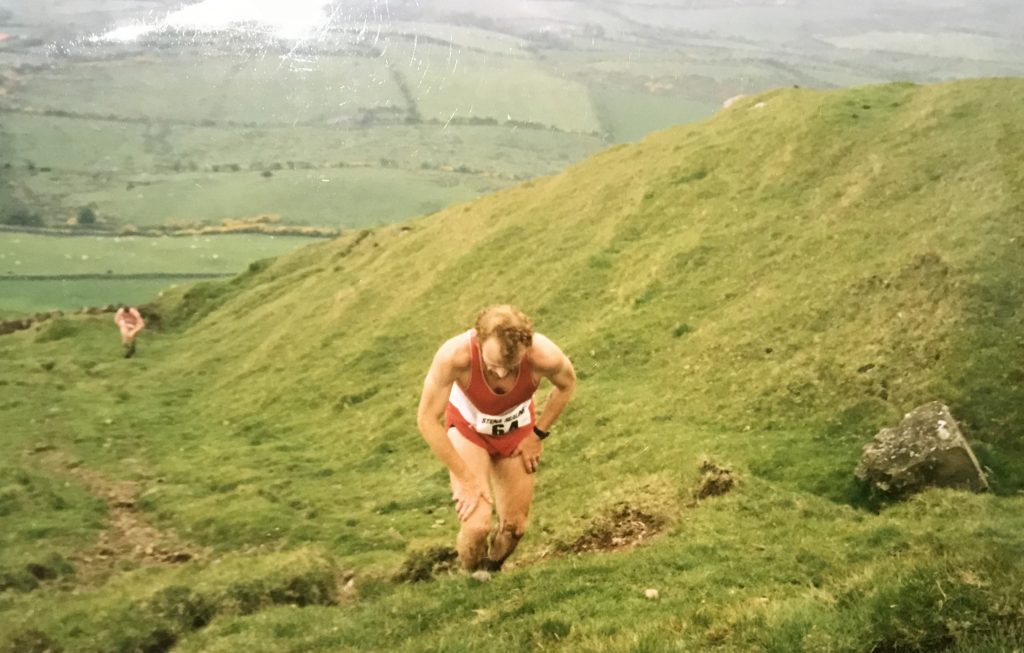 Denis Bell credits Eddie O’Neill with introducing him to the hill running which became the  only sport for him.   Many years later, Eddie (who now has his own excellent blog on the subject) asked Denis for his thoughts on training for hill running.   Denis wrote them out longhand and they are reproduced here in that format for a variety of reasons, but read and inwardly digest the following. 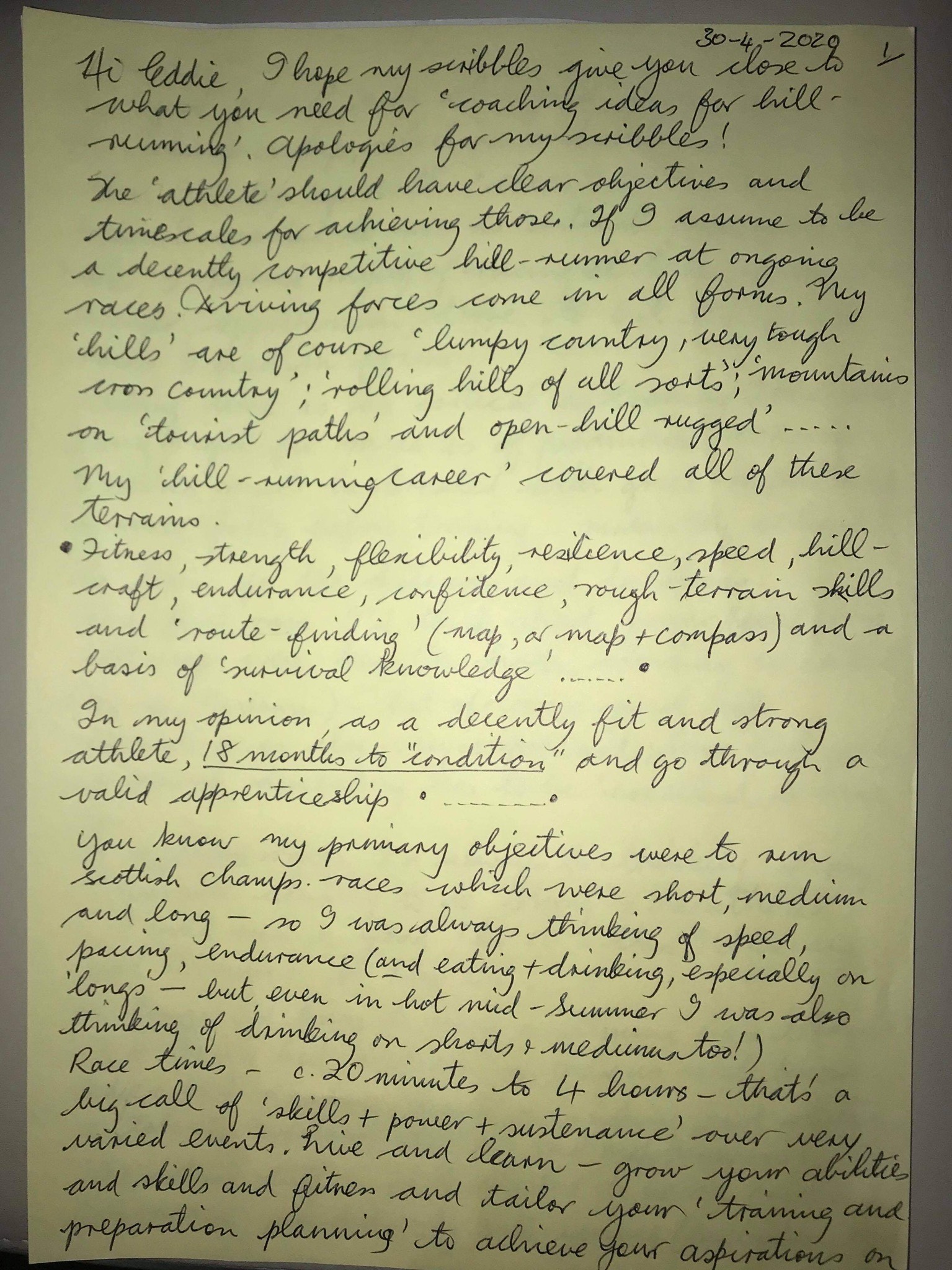 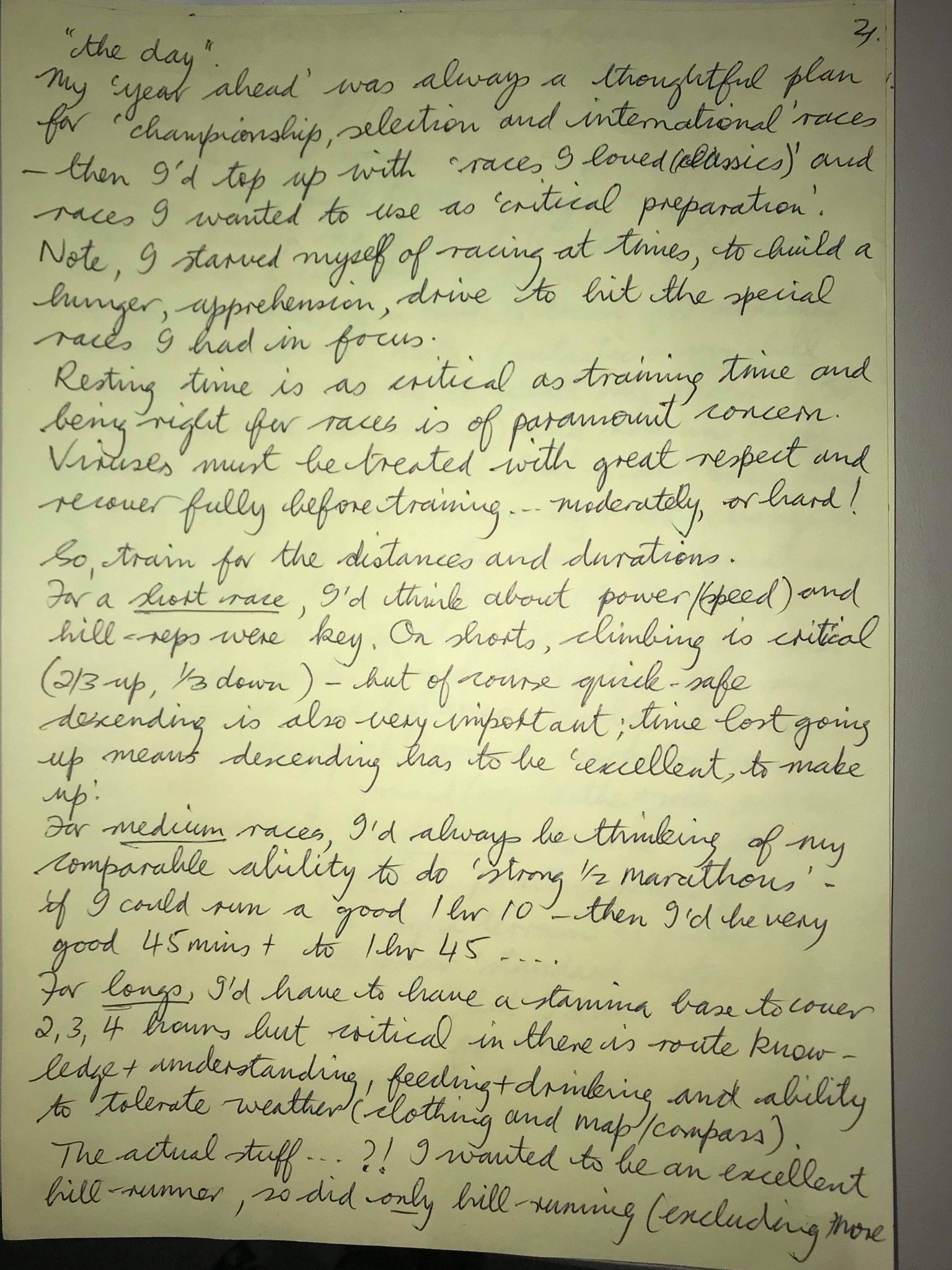 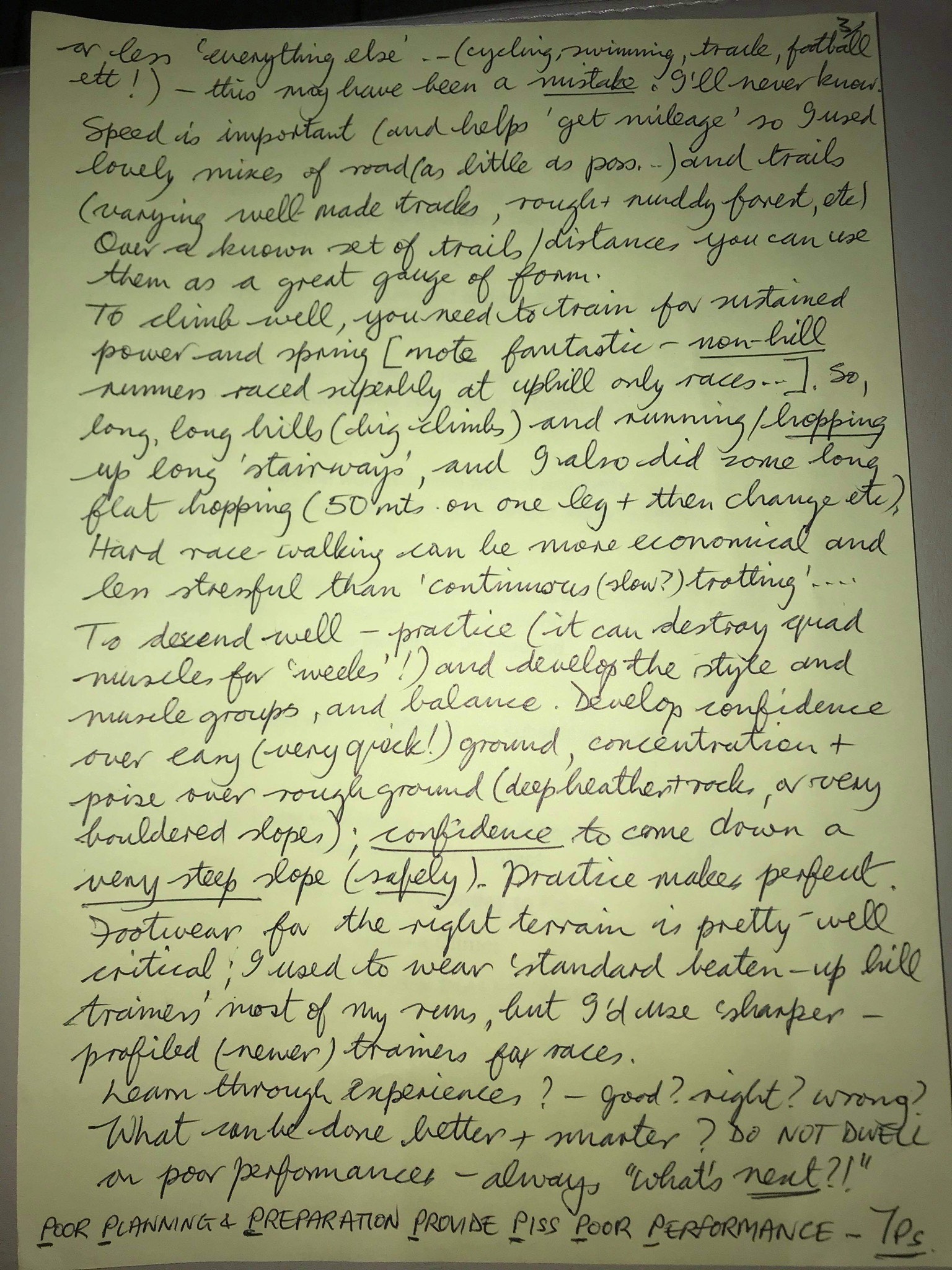 (a)  About 8-10 hours….
Possibly 30-40 minutes at lunchtime, and up to about 1-11/2 hours at night (towards the top end if I hadn’t run at lunchtime).  Lunchtime session would typically be ‘quick’ or wee hill reps or running routes where there were steps involved (power up quick…. concentration descending them quickly)
I always had a day off every week.
I would always try not to stress myself (tired or frazzled muscles) going into a race. If it was a long race I’d try to load and hydrate as if for a marathon. If no racing for a week or two then get in longer runs…. but always mindful of a taper to try and get in there decently fresh and with good appetite…
On the hills it became better to think hours than distance, to allow for the very varied terrain.. my marathon times were about 75-80 mpw… in the hills it was more like ‘maybe 40mpw’ but about same time 8-10 hours of good commitment.  I always trained ‘fast and quicker’ rather than ‘grind out the hours over bigger distances’ (largely to do with my personal approach but also family time constraints).
A key was reading the body mood and form… occasionally I could very quickly recover from anything I’d done (purple patch), but other times I just knew I had to throttle back and not go deep into the bank and leave myself short for racing….    I also would know what type of terrain and would sometimes load up descending practice to get the muscle groups best attuned….    All on the hoof Eddie with no formal structure, but the calendar always drove me to consider what my season would be like and I could foresee it all the 8 months ahead (March[Carnethy] to early November [Tinto]) and always thought about the week or two immediately ahead and specifically what that race would need.   My calendar was between 16-24 races a year (champs, selection, internationals, and ‘classics’) so from maybe 32 race weekends you can see I was very selective. I needed to do well in every single one, for points and vests (and even the classics [often with an international ‘feel’]where you knew you were against the best over superb courses, so that was fellow peer ‘kudos’) 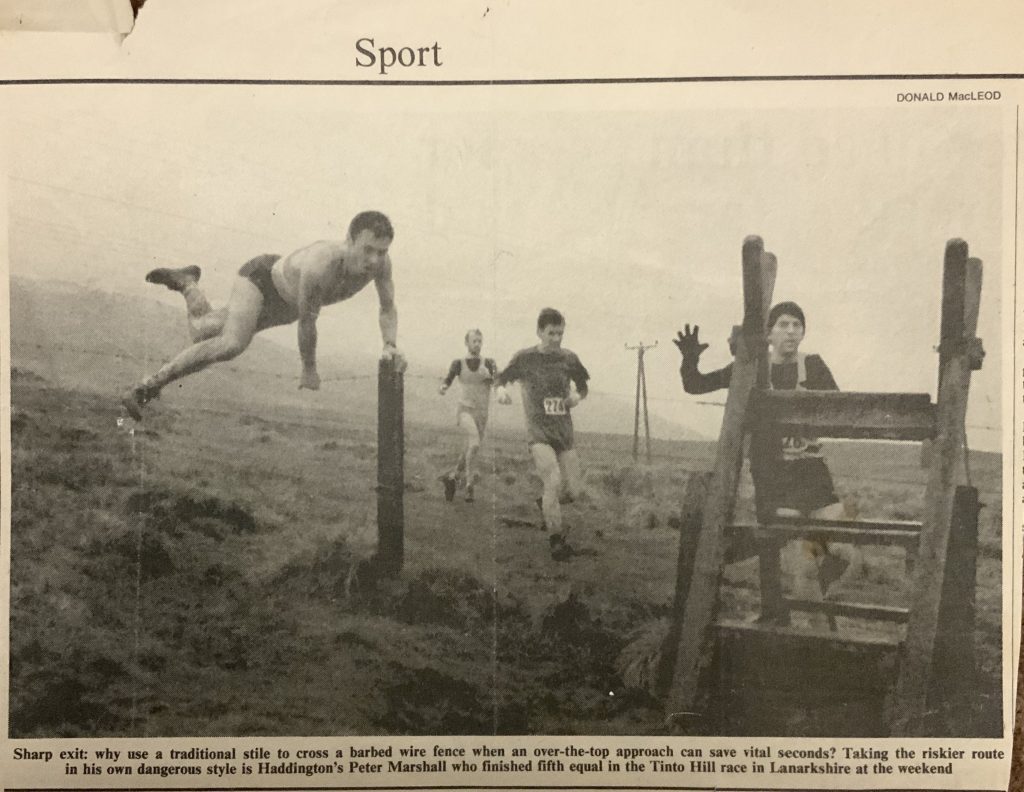 (b)   There’s a wonderful track up a very good slope just at the bottom end of the Hopes Reservoir.

I used to run it and recall something like 11 minutes up and 5 mins down(full tilt, part of the grind to keep going, then immediately turn and thrash myself down. I was already fit of course. I think I used to do these in 3s…..
I’d say decently gentle slopes to start with, and be careful not to run down too hard and trash the legs. Push up the way and ensure you ‘go over the top’ then turn and relax coming down, as recovery or pushing if you want to get harder descending legs…
2 minutes sustained up enough to get going etc….
But if you are on big hills got to decide ‘sustain a run as much as poss, or do race-walking if a bit too steep (as you feel fit/ strong enough or not)
My local reps route was Fa’side Castle…..
I used to do downs and ups in ‘about 5m 15s’ and take the gap to the 1/2 minute to go again. So virtually no recovery bits…
Started with 3, then following week5, then following 8…. a wee campaign of building; these were again when I was fit, training for Snowdonia Marathon, before I became a hulk runner.
The most rewarding session ever was when I did 12 reps in just under the hour….I amazed myself, no recovery breaks at all, turn-go! …. I Remember at 3 ‘ow’…5 half way to target of 10 (good but really tough)… got to 8 ‘settled’ (I will do this) pushed on to10 well under the hour (wow, going great)  thinking I’ll grab another 2 to 12, and did it!!! (tail end focus and probably a bit of Adrenalin rush…).
To roll up after good sessions of 5m10-5m15s then smash it all to do 12 sub 5s was amazing!!!
With full power on Eddie, I could run all the way up Ben Lomond ( standard route) and all the way the Ptarmigan route, excepting about 50-100 metres of the west facing crags (scrambling) . I was training Ben Lomond in less than 1h15m and 1.25 on the Ptarmigan route(fair bit more ascent)….
I needed to, I wanted to.. the fear of my competitors was strong …. 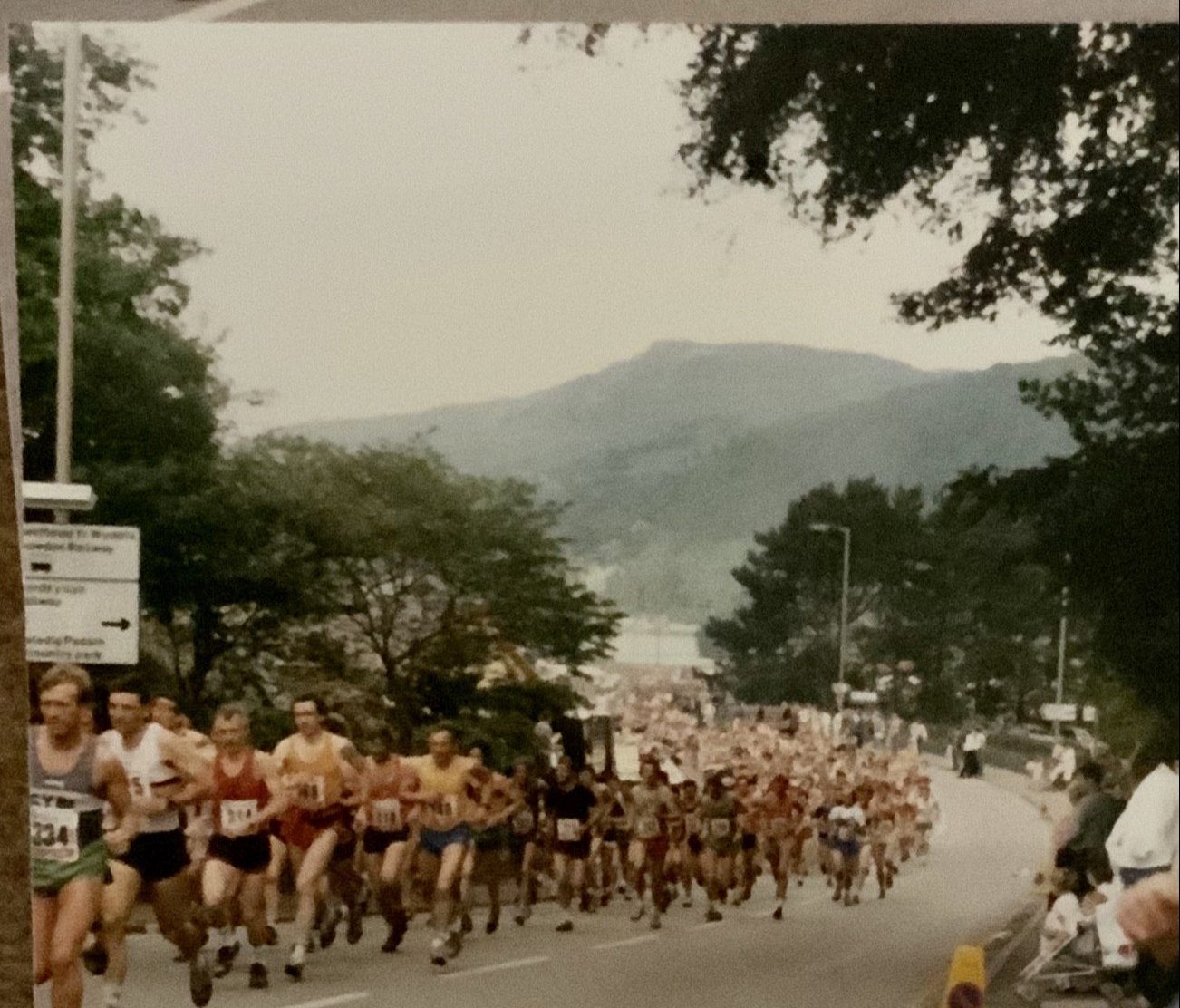