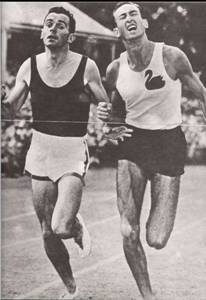 This is a fairly comprehensive list of books sent on to me by Hugh Barrow for comment.  While the list seems a long one, there are certain obvious omissions that I won’t add or tackle.   Regard it as complementary to Colin Youngson’s page on the same topic.   Hugh has divided the list into three groups – biographies, coaching books and a wee section on fiction.   Coming into the sport in 1956 as I did, there were two books available – Franz Stampfil on “Running” which I bought for 2/6d (17.5p) and Roger Bannister’s book “The Four Minute Mile” for the same price.   Both were paperback and both were published by Four Square books.   Bannister’s was educational but mainly inspirational while Stampfl (Bannister’s coach) had written a text book on distance running based almost entirely on Interval Training.   At one point in the 1980’s when one athlete complained that training was boring, I sat him down with Stampfl’s book and we went through the training for a Miler.   Twice a week in October it was 10 x 400 in a set pace; in November it was 10 x 400 twice a week at the two seconds faster pace; in December the same year it was 10 x 400 two seconds faster each; ditto in January, February and March.   Boring maybe but it worked for Bannister, Brasher, Chataway and many others and then when Stampfl emigrated to Australia, it produced Merv Lincoln (Elliott’s great Australian rival) and Ralph Doubell, Olympic 800m champion.   Not long after that Herb Elliott was the Man and Percy Cerutty the Coach, who also worked with Allan Lawrence, Albert Thomas and many other champions.   The Unbeaten Elliott set world records and won the Olympic 1500 metres but when it came his biography (The Golden Mile) was a disappointment to me – the same could not be said of Cerutty’s extensive writings on the subject of clean living, exercise and the making of champions.   Two wee Cerutty stories: first, he spoke of using the track to learn the pace and then going away to parks and golf courses to practice running at that pace until you felt you could carry it in a race and the story is told of him training Elliott in a park with the runner going easily until the coach yelled ‘Ding-a-ling-a-ling’ or some such at which point Elliott had to sprint for 60 seconds flat out;   second, he also reputedly often used to call out ‘Another 100, another 100’ when the athletes were nearing the end of one of their 400m reps so that always knew that no matter how tired they THOUGHT they were, they could always go further.   Elliott is still the hero of many milers of the time and beyond.

He was followed by New Zealand’s Peter Snell who was coached by Arthur Lydiard (athletes like Jeff Julian, Bill Baillie, Murray Halberg, Barry Magee).   Snell set a world half mile record on a grass track in the mid sixties and set more records and was also an Olympic champion.  His biography was “No Bugles, No Drums” and was better than Elliotts in my opinion.   Lydiard started the whole jogging movement – started in Australia it was taken up by Bill Bowerman in the USA and then it spread around the world.    Lydiard went on to produce world record breakers in Mexico and Finland as well as NZ.     Lydiard’s first book was “Run To The Top” and became the Bible for runners all round the world – 100 miles per week, long hill reps, planning the year down to the last hour of the last week of the year, he was regarded as infallible.   One of his runners met him one afternoon just as he was finishing his run and Lydiard was in his car: “The 100 mpw is working well, should I increase it?” asked the runner; Lydiard joked that he should increase it to 200 mpw – and the runner dutifully did.   But no good came of it.   The moral is do not joke with runners if you are a coach!    In addition to Snell, Halberg wrote an excellent book called “A Clean Pair of Heels” and there were others such as ‘Arthur’s Boys’, which my wife bought for me when she was in NZ on holiday before it was available here.     Lydiard’s own books are sprinkled all the way through the list.   And the writer Garth Gilmour did most of the writing for the books – his name appears beside Lydiard, Snell and Halberg.

I may make some more comments but have a look at the list – every book on it is still available.   You might even buy one – libraries often sell old books and they are a good source of material like this; internet book sites are also very good for all sorts of things.   I have a friend who has a series of pictures in frames with glass all the way up his stairs – he bought the photographs, several signed, on the net and then he got autographs also from the net and had them framed at the foot of the pic.   A very interesting display of his heroes signed photographs or magazine covers.    Another wee idea for you – or for a Christmas present for your loved one.   What could be nicer that a signed cover of AW in an attractive frame?

However, what came after Stampfl, Cerutty and Lydiard?   World middle distance focus moved to the United States and Bill Bowerman’s Oregon squad – Dyrol Burleson, Jim Grelle, et al.   Bowerman is maybe best known these days for the Nike Shoe and Clothing Company that he founded but he really was one of the world’s best coaches at the time and his men were among the best in the world but there was another squad from across the Atlantic and at the far east of the European continent coached by the Czechoslovakian Mihaly Igloi who was known for the huge volumes of mixed track work outs that his charges (Sandor Iharos, Stanislav Jungwirth,  Laszlo Tabori, and many others) were put through.   Igloi moved to the States latterly and among the top men he coached were Jim Beatty, a first class miler, and Bob Schul, OIlympic 5000m champion..   But while Bowerman and his athletes produced several books on what they did and how they did it, there was no such information coming in print form from the Igloi camp.   There were of course magazine articles and interviews galore but to the best of my knowledge there were no text books or biographies written.

The Self Made Olympian (Ron Daws)

In The Long Run (Bob Schul)

Jim Ryun: Master Of The Mile

On The Run (Marty Liquori)

In The Long Run (Jim Peters)

Running To The Top (Derek Clayton)

Steve Cram: The Making Of An Athlete

Running With The Legends Fast Tracks

: The History of Distance Running

Run With The Champions

Ovett Steve Ovett: The Portrait Of An Athlete

Guiness Book Of The Marathon

The Long Hard Road: To The Peak And Beyond (Ron Hill)

The Fastest Men On Earth

Who’s Who In Brittish Athletics

Athletes At The Games

How They Train: Long Distances

Bowerman And The Men Of Oregon

How Long’s The Course (Roger Black)

Paula: My Story So Far

In Quest Of Gold (Jim Ryun, 2 copies, one signed by Ryun)

Bannister & Beyond: The Mystique Of The Four Minute Mile

Sub 4:00: Alan Webb And The Quest For The Fastest Mile

Running With The Buffaloes (by Chris Lear & Adam Goucher)

On the coaching front, the best books available for most of my running and coaching career were the AAA’s Instruction Manuals.   In the mid 50’s the book had a picture of Herb Elliott on the front with a nice pink strip at the top and dealt with Middle Distance Running and was by the Welshman Jim Alford.   It was interesting, spoke about shaping the year and gave some specimen schedules as well.    The replacement manual was by Bruce Tulloh and Martin Hyman in the 60’s who came up with the question, “How little do you need to do to be world class?”   What a hook to get readers into your book!   It was a good book but the one that made a real impression was by the Scotsman Norman Brook: an excellent lecturer and part of the national coaching set up he seemed to subscribe to the complex training methods of the Eastern Europeans.   Intensely practical and a real ‘user’s guide’.  But possibly the one that that every new coach should have had on his bedside table is Frank Dick’s  “But Firest …” which is a primer for those starting out on the coaching road.   In A4 format, well illustrated with line drawings it is an excellent book for its purpose.   It is unfortunately, like lots of good books, out of print now but it’s worth every club having one.   Frank Horwill, was concerned with the state of British Middle Distance running in the late 50’s and early 60’s and was a founder member of the British Milers Club which had the express aim of raising the standard of British miling.   He himself came up with the five pace system of training and advocated it tirelessly in print and in person.   He made sense of what some of us were struggling with at the time: how do the different paces relate to one another?   Alford was all very well with the advice to run faster than race pace and further than race distance, etc, but how much faster and ho much farther?   Frank with his definite definitions of what constituted 800m pace, what constituted 1500m pace etc, and what recoveries were appropriate really helped the debate along.    Peter Coe adapted a lot of Frank’s ideas and altered the terminology of the five pace training to the five-tier system.   It worked well with Seb and he too produced several books with David Martin and Seb himself.   A third top British coach was Harry Wilson who worked with Steve Ovett, Lesley Kiernan, Tony Simmons and others started from the point of view – what are the demands of the event and what does this particular athlete bring to it?   His book is one that found favour with many, many athletes and coaches in this country.

The Americans were never backward in coming forward into print with their ideas and the list below notes Bill Dellinger (Tokyo Olympics 5000m bronze medallist), Bill Bowerman, Bjorkman and Fred Wilt.    His was a very good and under-rated book.   Probably because the reader had to do some work himself: Wilt surveyed various methods of training and put them side by side.   He also divided the year up in different ways for the reader to use as was appropriate.   He was not peddling his own wares, he was selling the sport.   That was ‘Run, run, run’ but he also had a collection of training programmes of different, mostly American, runners in ‘How They Train’.

For reasons that I can’t fathom, the two Tom McNab books – ‘Flanagan’s Run’ about the foot race across America and ‘The Fast Men’ about the sprinters in the Old West (gives a new meaning to the fastest man in town!)  have been left off the list.

Hugh followed up the above list with one which is only of Scottish publications although of a much wider interest.   We can start with the stories of some of our best known and longer lived clubs, including Clydesdale Harriers, Scotland’s premier athletic club.   A surprising omission is that of Victoria Park AAC: one would have thought that someone would have written an account of the origins and development of such a club.    How about it VP?

In keeping with the theme of the website, we go on to the books by individuals who have graced the National scene: it goes wider than just endurance running and even includes the noted strong man Donald Dinnie.