Various online sources miss out a very important part of Priscilla’s athletic progress: when she was living in Shetland and often racing in Scotland between 1981 and 1983.

Wikipedia sums up her running career as follows: 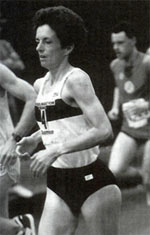 Priscilla Welch was a very good marathon runner indeed – one of the best in Britain – whose career has been deservedly covered in detail.  But various online sources miss out a very important part of Priscilla’s athletic progress: when she was living in Shetland and often racing in Scotland between 1981 and 1983.

Born in Bedford, England, she had a most unlikely career in international athletics, having smoked a pack of cigarettes a day until she began running competitively at age 35. An officer in the British Army, Welch met her future husband Dave while serving in Norway. She quit smoking and, under his tutelage, ran in the 1981 London Marathon at age 36, finishing in 2.59.00.

Mel Watman wrote: “When Priscilla met Dave in Norway, she was a petty officer in the Wrens, serving as a NATO communications clerk; and he was stationed with the Royal Signals. Dave was a keen runner and Priscilla found a new interest. She took part in her first marathon in Stockholm in August 1979, finishing ninth in 3.26. She was two minutes slower a couple of months later, but a year’s solid training paid off for the late-starting newcomer, when she edged under 3 hours in the 1981 London.

In July 1981, Dave was posted to the Shetlands for two years, but the harsh conditions encountered in that most northerly outpost of the UK failed to deter the increasingly enthusiastic Priscilla. Indeed, the adversity was a blessing in disguise, as it toughened her up for the challenges ahead. During the winter, while logging up 85 miles per week, she had to wear a miner’s helmet with a lamp, just to see where she was going.

Undramatically, [she won the Glasgow in 1981 (2.55.15) and 1982 (2.46.58)] it would have needed a vivid imagination to picture her as a future British Marathon record-breaker and Olympic representative.

However, in 1983, she made a major breakthrough by cutting more than 14 minutes off her best time. After placing tenth in London (2.39.29), she was selected for her first international, in which she excelled by finishing fourth in the European Cup Marathon in Laredo, Spain. In very hot weather, she came in less than four minutes behind the winner in 2.42.26.

Later in the summer of 1983, having moved from Shetland to Kingston upon Thames near London, she scored her first international victory, clocking 2.36.32 at Enschede. That 1983 campaign ended with yet another personal best (2.32.31) for third in her New York debut – a performance which, at the time, only the trail-blazing Joyce Smith had ever bettered in British marathon history.” 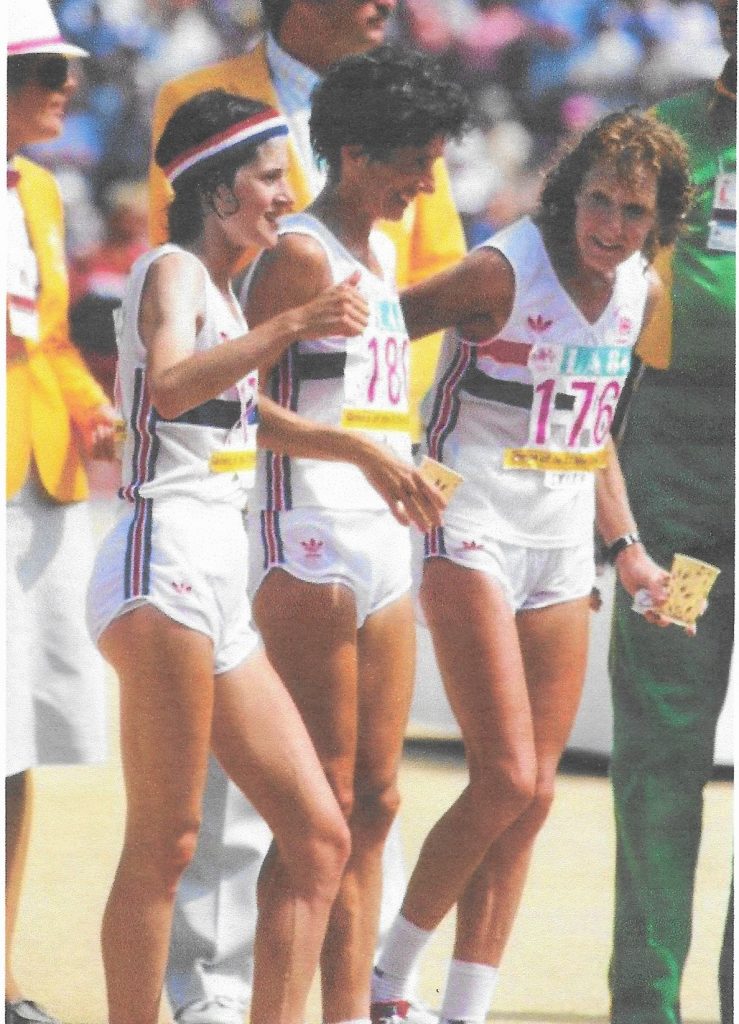 In 1982, Priscilla ran London in 2.53.36, the Bolton Marathon (2nd in 2.56.19); and the Scottish Championships at Aberdeen, where, running for Shetland Harriers, she was third in 2.55.59 (behind Lynda, who was second in 2.53.04.) After all that hard Shetland training and tough racing, Priscilla deserved her improvement, recording 2.46 to win in Glasgow!

When she moved to the London area in summer 1983, and joined Ranelagh Harriers, this may have ‘sharpened’ her for that international victory in Enschede (2.36.32) and fine New York Marathon (2.32.31).

The rest has been summarised above by Wikipedia, or mentioned in her Ranelagh interview: training in Lanzarote with the British Olympic Squad; a marvellous second place in London 1984 (2.30.06); altitude training in Boulder, Colorado (later to become home for Priscilla and Dave); that fantastic Olympic sixth place (2.28.54); working on speed for two years [plus six American marathons (including a victory in Columbus) and two Japanese)]; then that superb 1987 London (2.26.51) and a win that year at New York (2.30.17).

Priscilla Welch secured her selection for the Seoul Olympics with that New York performance plus 4th place in the April 1988 Boston (2.30.53) but unfortunately injury prevented her from taking part.

Priscilla continued to run at a high level in the States for four more years before breast cancer in 1992 brought her serious running career to an end. In 2003 Runner’s World magazine voted her the best-ever female masters marathoner.

Olympics 1984 – Crossing the finish Line (with instructions from Dave to behave myself seeing as I was a rookie) I became 16 yrs old and crossed the javelin competition which was live (twice) looking and cheering for Joyce and Sarah. Was well told off by an official, and became 39 again. Saluting the British fans with Joyce and Sarah. Dave meanwhile had started to lose his hair!”

In her online Ranelagh interview, Priscilla Welch comes across as a clever, thoughtful, athlete, who loved distance running and deserved every triumph in an outstanding career. There is little doubt that she laid the foundations for that success in Shetland, Aberdeen and Glasgow!