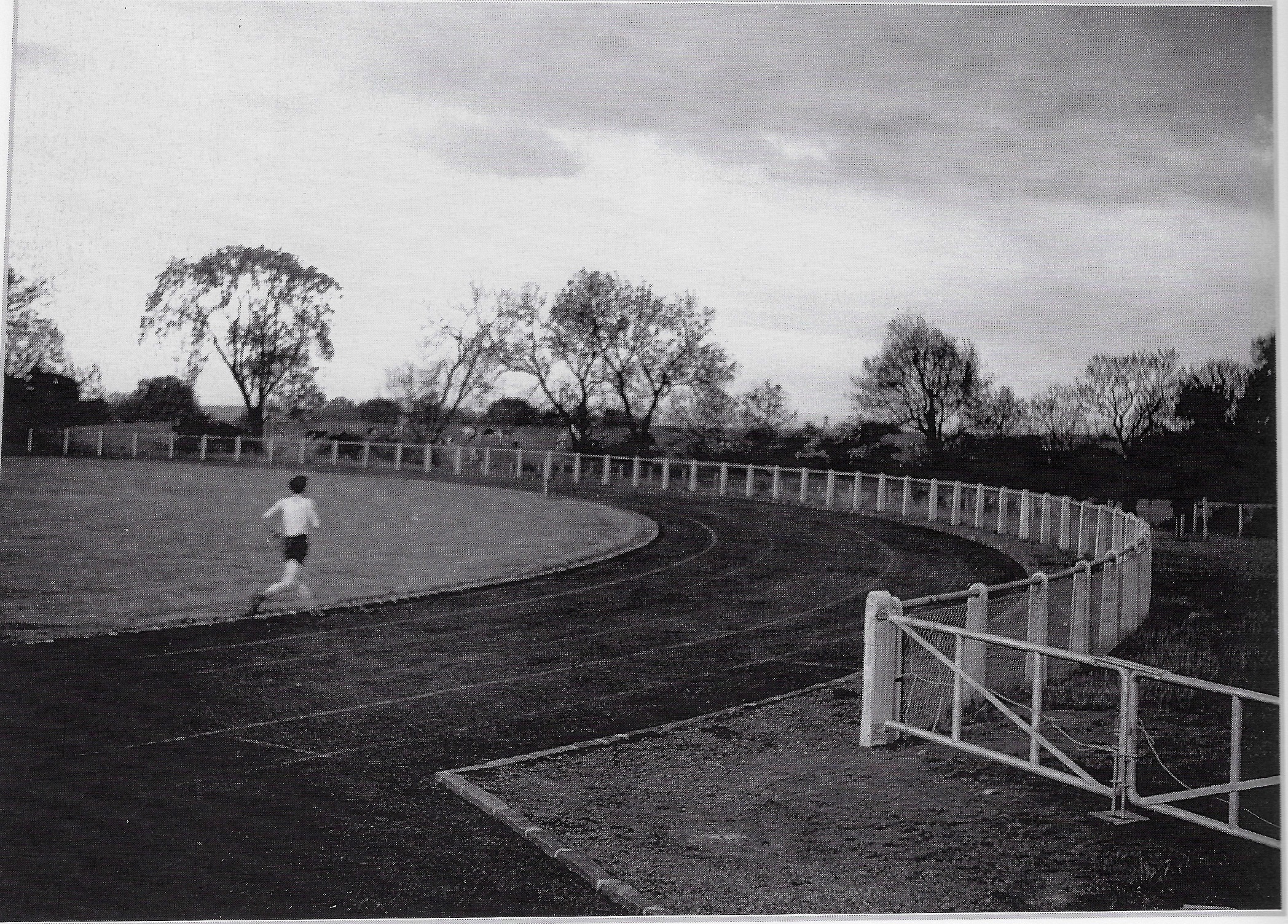 Few of us who ran on the track at Pitreavie back in the late 1950s and 1960’s could possibly have visualised the stadium as it is today with the all-weather facilities, indoor training arena with running and weight/circuit training facilities.   The transition over more than a half century is of course down to the word done and initiatives of a whole series of individuals and committees over the years.   In the beginning athletes turning up for championships had to change in what is now a football pavilion and walk or jog down to the track   Now it is a matter of yards.   One of the best facilities in the country it has hosted meetings at all levels from club to international.   As it has developed, the Pitreavie AAC club has also grown and has turned out many top class performers in track and field events.   Graham McDonald has worked hard to produce the story of the track, and the club over the years and we begin with his account of the beginnings in the 1950’s and taking us up to the formation of Pitreavie AAC.

Graham has also drawn up lists of the best performances in all events (Men’s track,  Women’s track, Men’s field events  and  Women’s field events) over the years – a veritable who’s who in Scottish athletics and not a few European, Commonwealth and Olympic greats too.     Just click on the appropriate link.    Now read about the stadium.

The Carnegie Dunfermline Trust was keen to encourage outdoor sports  for local schools – particularly Dunfermline HS – and leased the ‘Pitreavie Games Park’ from the Trustees of Pitreavie Estate in 1926.   In 1930 the CDT purchased the Park outright and expanded it by buying adjacent fields . A year later, plans were put in place to construct a Pavilion and prepare the playing area for games: Rugby , Football , Cricket and Hockey. It was also used for Cycling on a marked out grass track from time to time. The New Pavilion was opened on 13th June 1934 by Mrs Louise Carnegie , wife of Andrew Carnegie. Further progress in the development of the Playing Fields was interrupted by the outbreak of WW2 in 1939. The Pavilion was requisitioned by the military to accommodate , initially RAF personnel and then 300 Royal Navy Wrens.   Following the end of WW 2, there was an increasing demand from the public to open up the opportunities for playing sport again. In 1945 CDT requested the MOD return the Playing Fields and Pavilion to them but it wasn’t till 1947 that was completed. However in order to make them suitable for public use again , quite a bit of work was required , particularly on the Pavilion which had the serious problem of a leaking roof which meant the original ionic Clock Tower had to be demolished.

In the meantime Mr Ord Cunningham , Vice Chairman of the CDT , a keen athlete in his younger days , was keen to explore the possibility of an Athletics Track at Pitreavie Playing Fields. He contacted Jimmy Gilbert, Secretary of the Scottish Amateur Athletic Association at that time, to enquire about the specifications required for the construction of an ‘Olympic’ standard track.   He also asked Gilbert if he could recommend a list of contractors he
considered suitable of building such a facility.  Gilbert was very keen to help and encourage a new facility in Scotland as the tracks here were run down following the hostilities and a new facility would give a much needed boost to the development of the sport North of the Border. He contacted Jack Crump of the AAA. Crump arranged a visit to London to discuss the new track with those involved laying the new track at the White City for 1948 London Olympics.   The ground at Pitreavie Playing Fields was surveyed , the position of the track agreed and in 1949 tenders were issued for the construction.. The original idea of a cycle track outside the athletic track (similar to Grangemouth) was dropped due to cost and the contract awarded in 1950 at a cost of £17,000 (how much of a track would get for that sum these days).   Tony Chapman, Scottish National Coach , advised on equipment and
Bill Pryde , head groundsman at PItreavie , went down to London University’s Motspur Park, to learn the maintenance programme requirements for new tracks, from legendary groundsman Archie McTaggart , who was in charge of maintenance of the ’48 Olympic track.

The Pitreavie track was finally completed in 1953. By modern expectations it would be considered quite basic:
A 440yd cinder track by En-Tout-Cas with tubular railing round it. 3 sand pits for the jumps (grass take offs) , 2 throwing circles and a Javelin throwing sector (grass). There was no cover or facilities for spectators with only a grass banking round the track. Equipment was stored in an old shed next to the main changing pavilion 200yds away. In order to train for a field event , an athlete would barrow over the equipment required , by hand. For an organised meeting , the groundsman’s tractor and trailer required. 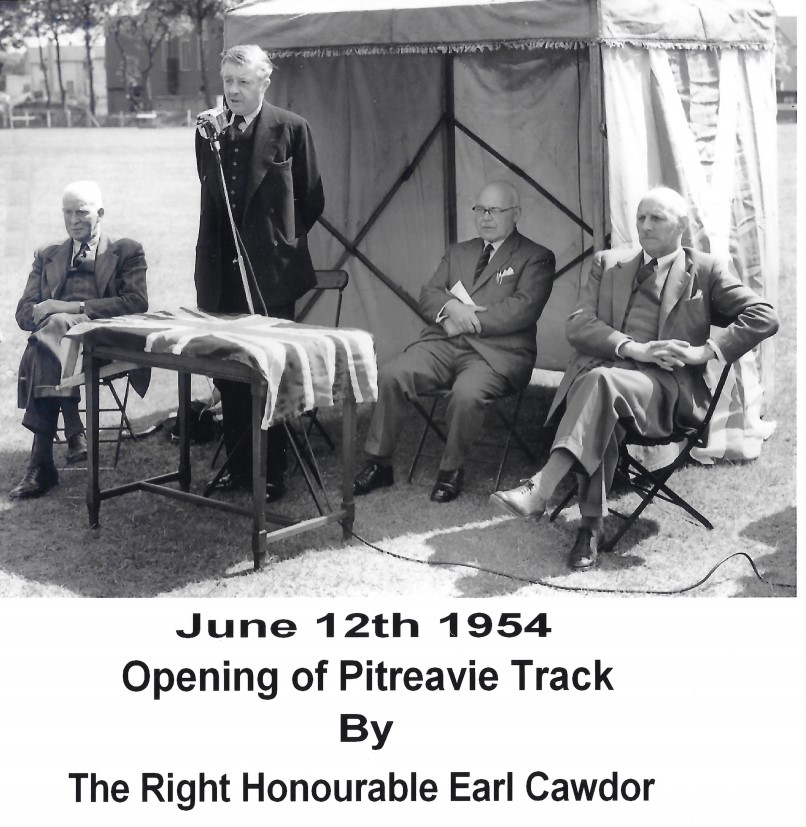 The facility was opened by Lord Cawdor, Chairman of the Scottish Branch of the National Playing Fields Association in conjunction with 1954 Scottish Schoolgirls Athletics Championships.(Schoolboys Championships were held separately in those days)   He apologised for the absence of the Duke of Edinburgh, President of the National Playing Fields Association and the Duke of Buccleuch, President of the Scottish Branch who were invited but unable to attend.   He congratulated the Carnegie Dunfermline Trust (CDT) for laying down this facility – he understood it to be the only track in Scotland built to Olympic standards.   Mr Ord. A Cunningham, Vice Chairman CDT was called upon to give a vote of thanks to Lord Cawder by CDT Hon Treasurer Wm Dick who gave Mr Cunningham credit for driving this project to fruition.   Mr Cunningham added that 25 years ago, as a keen athlete, he had looked for a track to use but there was none. Now that the facility was in place he hoped that it would be fully utilised.  Graham McDonald notes that Mr Cunningham’s’s faith in persuading the CDT to construct the track has been fully justified.

The photograph below was taken at the opening meeting.   The crowd as shown in the picture would please any meeting organiser in any sport. 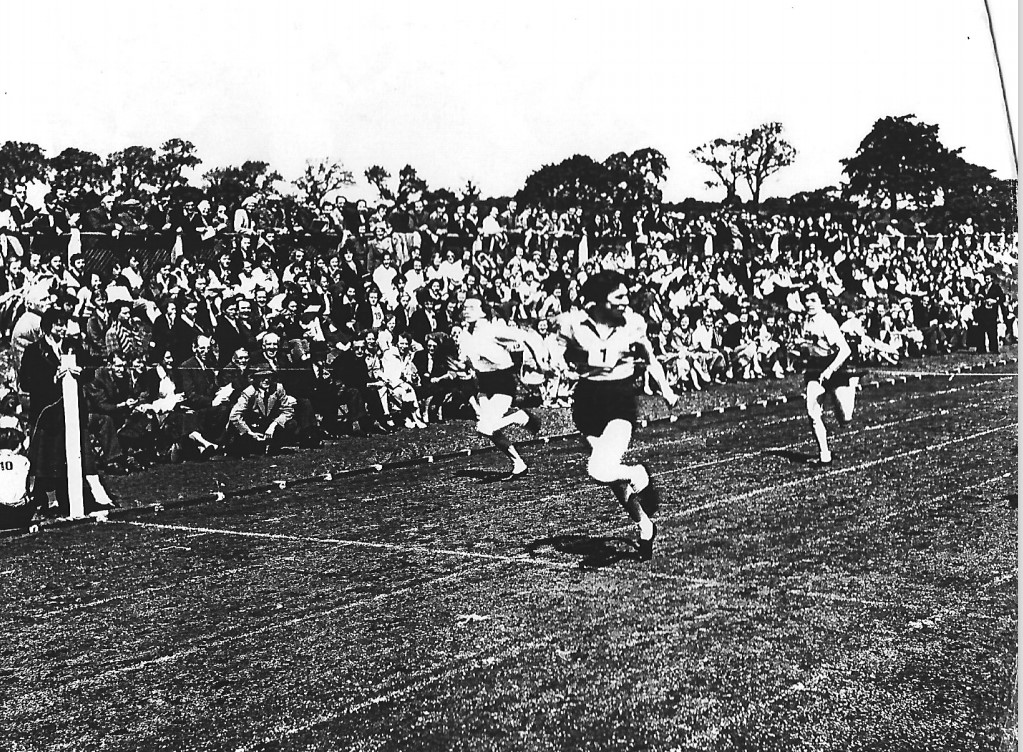 Having invested in a new ‘Olympic Standard’ track , CDT were keen that the facility would be well used by encouraging local youngsters to get involved in the sport and hopefully used to host national events.   Most of the interest in athletics in the area had been in ‘Professional’ running , mainly in Highland Games and the annual Powderhall New Year Sprint. Although there are reports of some excellent results in the Scottish Schools Championships by pupils of Dunfermline HS as far back as the 1920s, there had been no provision to encourage them to continue in what was termed at the time as ‘Amateur’ Athletics. CDT had been hoping that the Pitreavie track would fill the gap.  Therefore in 1953 , ahead of the official opening of the track , CDT had promoted the formation of an ‘Athletic’ club as a section of the Carnegie Physical Training & Athletic Club which was primarily a gymnastic club..
The new club was called Carnegie Amateur Athletic Club (ref Letter Dunfermline Press 11th April 1953). However , it never really got off the ground.   Training sessions were sporadic and no competitions were organised. In order to help stimulate local interest in athletics , the SAAA offered to transfer the Annual SAAA v Atalanta (Scottish Universities) match from Meadowbank to Pitreavie. That took place on the 30th June,1955 and was attended by one Graham McDonald.   The Atalanta fixture became a regular feature at the Pitreavie venue for many years.
However, CAAC continued to disappoint, the secretary resigned and it defaulted on the affiliation fee to the SAAA and ceased to exist. Early in the 1956 season CDT approached local athletics enthusiasts who used the track for training and were obviously very interested in the sport.   The outcome was that CDT asked two of them, Geoff Seabrook and Claude Foley , if they would interested in forming an athletic club.   One evening soon after that meeting, youngsters using the track were called together by Geoff on the grass banking surrounding the track, He explained that he had been asked by the CDT to form an Athletic Club and suggested that it be called Pitreavie AAC but it would have to be agreed formally at a properly convened General Meeting.   In the meantime a couple of inter club competitions and ‘club championship events were organised to provide some competition for the youngsters who frequented the track.
This General Meeting took place in September 1956 when the club name Pitreavie AAC was formally proposed and agreed in the presence of Mr Ord Cunningham and Mr Andrew Buchanan of the Carnegie Dunfermline Trust.   Mr Geoff Seabrook was elected President Mr Claude Foley was elected Secretary.   A small committee was formed, Pitreavie AAC was up and running (& jumping & throwing.)